Reactions to Raid on Flotilla A Rorschach Test for Jews 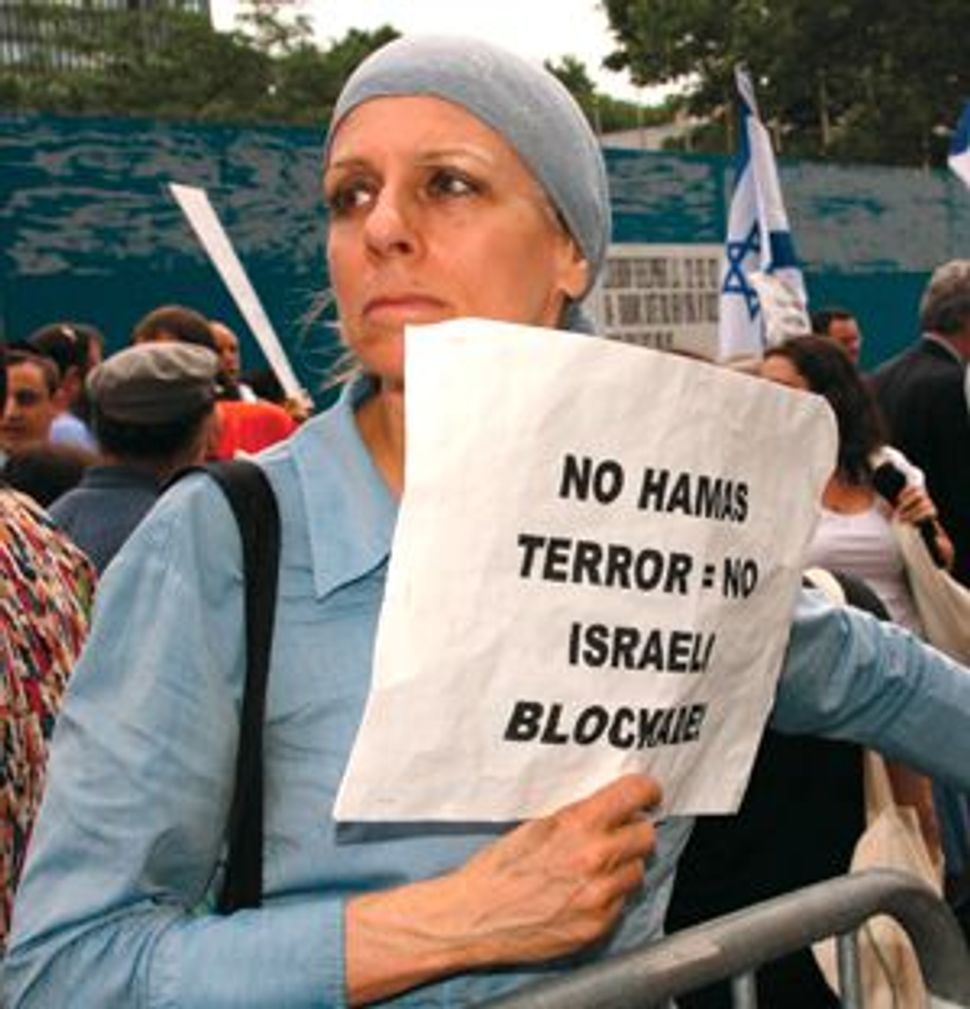 Defense: A pro-Israel protester at a rally in front of the Turkish consulate in New York City. Image by SHulAMIT SEIDlER-FEllER 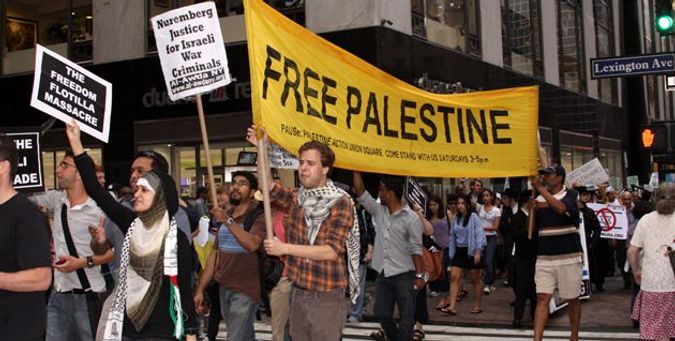 Seizing the Moment: Pro-Palestinian activists gathered on June 1 in front of the Israeli consulate in New York City and proceeded to march down 42nd Street to Times Square. Image by SHulAMIT SEIDlER-FEllER

As the sun rose on the day following the so-called Freedom Flotilla’s attempt to breach the Israeli blockade of Gaza, the American Jewish Committee had already sent out an e-mail blast touting its narrative of the bloody denouement that took place. An hour later came talking points from the Jewish Federations of North America.

A succinct storyline had been established even before all the details of the raid that left nine of the activists dead had become clear. The video of the vicious attacks on the Israeli soldiers rappelling down to the ship from helicopters — one that bolstered Israel’s version of events — had not been made available yet.

“When Israeli commandos boarded the ships, they were met with violence from a supposedly nonviolent group, including gunfire from automatic weapons and attacks with knives and axes,” the AJC statement read. “Several Israelis were wounded. As a result of the clash triggered by the pro-Hamas group, a number of them were killed or wounded in the confrontation.”

Here was one more Rorschach test for an American Jewry that has become increasingly factionalized when it comes to Israel, viewing every situation through its various preconceptions on the left and right. Either Israel was beyond reproach and acting in self-defense, or the incident highlighted a growing unease with the blockade itself, which one group of progressive rabbis called “the overall context of oppression.”

At one end of the spectrum, the American Jewish establishment heeded the call of the Israeli government to defend its actions in the face of an extremely negative public relations storm.

“Thank you for listening and understanding and for advocating and for trying to put things in the right perspective, remembering that we are the victims here and we are the ones who were compelled to take these actions to defend ourselves,” said Daniel Ayalon, Israel’s deputy foreign minister, on a conference call June 1, organized by the JFNA and the Jewish Council for Public Affairs, in which more than 700 people participated. “As you know, today the war is on the screens. The war is a political war, a PR war and also a legal warfare. And for that we need you more than ever.”

Yuli Edelstein, Israel’s minister of Public Information and Diaspora Affairs, told another conference call, this one with the Conference of Presidents of Major American Jewish Organizations, that “Israel has nothing to regret and nothing to apologize for.” 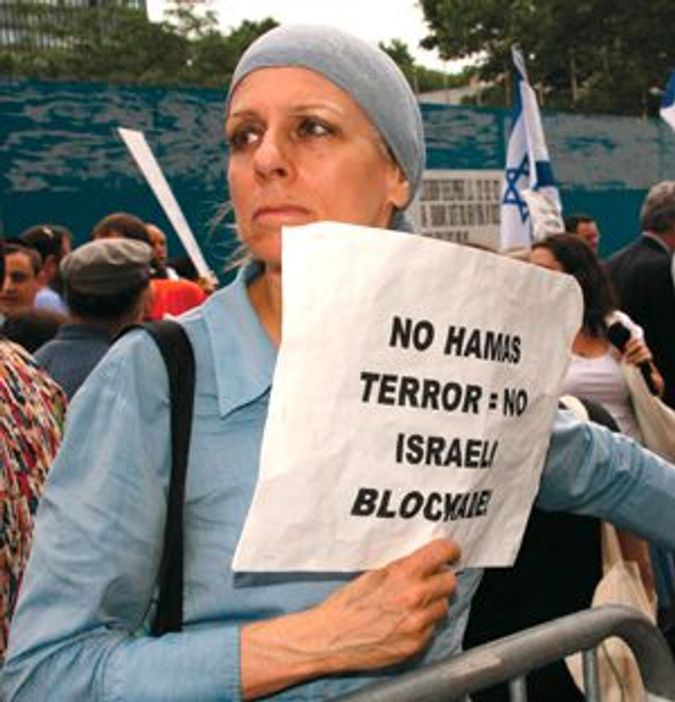 Defense: A pro-Israel protester at a rally in front of the Turkish consulate in New York City. Image by SHulAMIT SEIDlER-FEllER

The American Jewish leadership seemed willing to go along with this message. Steve Gutow, JCPA president and CEO, said on the conference call in which he participated that even though he regretted the loss of life, “our job as lovers of Israel and lovers of peace is to make sure that the public opinion of this country remains firmly on the side of what is just and right. Israel has every right to defend itself, and we are going to stand by Israel as the facts of the incident continue to come to light.”

If there was any criticism of Israel at all from the acknowledged leaders of the Jewish establishment, it came in the form of questioning whether the operation had been well planned. In many ways, this echoed what became the dominant narrative in mainstream Israeli society in the 24 hours after the raid. The title of one column in the popular Israeli daily Yediot Aharonot was “How Did We Get So Dumb?” Another, in Haaretz, was “Fiasco on the High Seas.”

David Harris, the AJC’s executive director, came very close to agreeing with this criticism while speaking with The Forward, though he stepped back from actually making it.

“My problem is that it’s all too easy attempting to second-guess in situations where you are thousands of miles away and where you are not asked to make on-the-spot, life-or-death decisions,” Harris said. “So sitting where I’m sitting, it’s tempting to say that Israel surely could have done it differently. Their intelligence might have been better about the people on this particular ship as opposed to the other five ships. The kind of troops they sent on the ship might have had more riot-control experience or might have been given different tools, rather than paintball guns or whatever, so it’s tempting. But I think that Israel has the capacity to examine itself, and it will.”

J Street, the left-of-center lobby that claims to represent a silent majority of American Jews who it says feel alienated from the knee-jerk support for Israel among Jewish leaders, took a different approach. The group’s initial statement could be read as either nuanced or safe, depending on one’s perspective. Rather than condemning Israel, J Street called for a “credible, independent commission appointed by the Israeli government,” and lamented the blockade itself — “believing that there are better ways to ensure Israel’s security and to prevent weapons smuggling than a complete closure of the Gaza Strip.”

“The vast majority of responses that we saw were circling the wagons on one side or the other,” Hadar Susskind, the group’s vice president of policy and strategy, told the Forward. “There are the people who are saying Israel was attacked by a bunch of Al Qaeda funded terrorists. And then there are those who are talking about peace-loving activists who are trying to bring food to the children of Gaza who are being starved by the fascist Israeli government. Well, I don’t think either of those are an accurate representation of reality.”

Susskind said that he had experienced criticism from both left and right for the position that J Street took, but felt that its perspective was “representative of what people are feeling right now.”

The crux of that position is the argument that the blockade itself is immoral and counterproductive.

This was a sentiment picked up by many American Jews on the left, including a group of progressive rabbis such as Arthur Waskow, who signed a letter demanding that the Jewish community not “turn away in denial or blame those of good will and good purpose who risked their lives to relieve the beleaguered people of the Gaza Strip.”

“I think one of the risks we run in this kind of moment is losing the forest for the trees,” said Alissa Wise, a New York-based Reconstructionist rabbi who signed the letter. “I think it’s really important to keep focus while all the claims and counterclaims are being made that the essential issue is that the blockade on Gaza has to be lifted. To some extent, I’m less interested in what happened on the ship or didn’t happen.”

This is exactly the worry of the Israelis, to judge from their initial public relations outreach to the American Jewish community, especially with the prospect of more attempts to break the blockade: As of this writing, another boat, dubbed the Rachel Corrie for the left-wing activist killed while trying to block the path of an Israeli bulldozer, was heading toward the Gaza coast.

“There were many, many lessons learned from the operational point of view,” Ayalon said on his conference call. “ But I don’t think that the policy or the strategy was wrong. We have to keep our eye on the ball and certainly not allow anyone to break this blockade.”

Peter Beinart, who is the former editor of The New Republic and the author of the forthcoming book “The Icarus Syndrome: A History of American Hubris,” and whose recent essay about what he called the collapse of liberal Zionism has gained much attention, also argued that the blockade itself was the real problem. As he wrote in a column for The Daily Beast, Beinart saw the reaction to the flotilla incident as “the most dramatic example yet of why the epidemic of not watching must end.” There was little criticism of Israel, he said, and those who did have problems with what happened focused entirely on the operational failures as opposed to what he called the root causes.

“I do think that the embargo is the larger context that led to this happening,” Beinart told the Forward. “That’s the larger important context. And what I suspect will happen is that the whole question of the Gaza embargo is going to be forced onto the agenda, and I think that’s a really good thing.”

Reactions to Raid on Flotilla A Rorschach Test for Jews