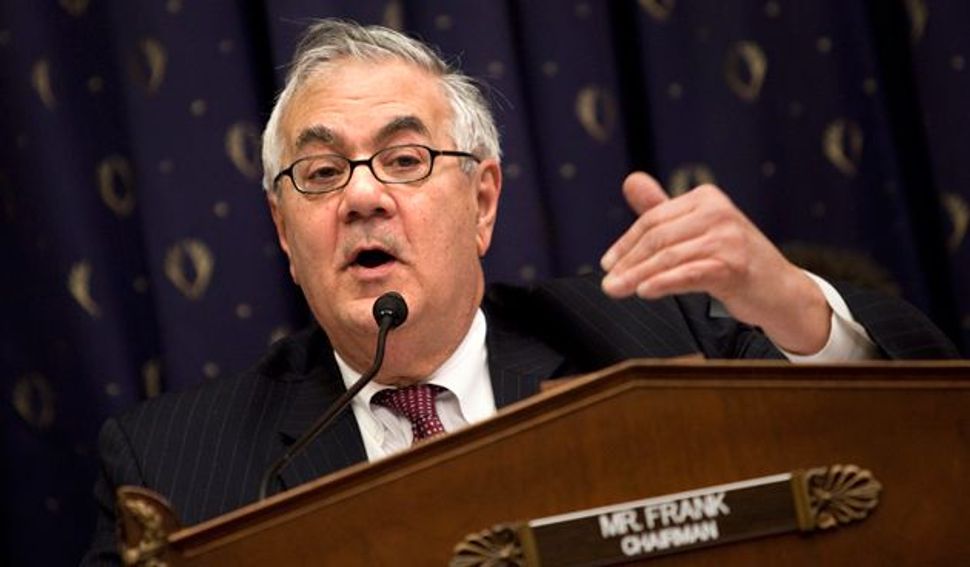 Supporting Israel: Frank said he had no critical words for Israel?s conduct in the flotilla raid. Image by GETTY IMAGES

Israel’s blockade of Gaza is comparable to sanctions levied by the United States Congress against the apartheid regime of South Africa in 1986, Massachusetts Democrat Barney Frank told the Forward in an interview June 3.

Rebutting critics who decry the effects of the Israeli blockade on the health and welfare of Gaza’s Palestinian residents, Frank said, “I remember that argument being used against our tough sanctions against the South African regime during apartheid. People said, ‘You’re hurting the South African black people,’ and Ronald Reagan vetoed the bill and we overrode his veto.

“A few years later,” Frank recalled, proudly, “I listened to Nelson Mandela in the Capitol thank us for helping maintain the sanctions because they were so effective.”

When Congress passed the Comprehensive Anti-Apartheid Act to help blacks living under apartheid in South Africa, it acted at the behest of the African National Congress and American groups supporting the liberation struggle of South African blacks. The legislation pressured the South African government to lift apartheid by banning all new United States trade and investment in South Africa.

No Palestinian group has called for sanctions against Gaza to bring down the Hamas regime governing that territory.

In his interview with the Forward, Frank sought to clarify remarks the Boston Herald attributed to him in a June 2 article. The article stated that the congressman “had harsh words yesterday for the Israeli navy.” But a transcript of the interview that Frank provided to the Forward showed no evidence of such remarks.

The Herald story also quoted Frank as saying that Israel’s treatment of Arabs in some of the West Bank settlements makes him, “as a Jew,” “ashamed that there would be Jews that would engage in that kind of victimization of a minority.” The article had attributed his sentiments to his views on the flotilla raid.

In the context of the controversy over Israeli commandos who killed nine people during Israel’s interception in international waters of a ship that sought to break Israel’s blockade of Gaza, Frank was also quoted as saying, “Once you have a combat situation and innocent people die, I mean, you know, look at our problems in Afghanistan, and we have an obligation to try and avoid it.”

“I never said anything critical of the Israeli navy,” Frank stressed in his interview with the Forward and in a statement. The liberal representative, who chairs the prestigious House Financial Services Committee, went to great lengths to emphasize he had no critical words for Israel’s conduct in the flotilla incident.

While making clear there is no distance between his views and those of Israel in regard to the flotilla controversy, Frank did not shy away from criticizing Israel’s policy on building Jewish settlements in the occupied West Bank.

“This is the one issue on which I think they [the Netanyahu government] should be doing more,” Frank said. “The fewer settlements there are, the better off Israel is long-term in the West Bank. It’s not as if they’re sacrificing security. Those settlements divert security efforts.”

Frank believes the makeup of Benjamin Netanyahu’s coalition, which is based on a partnership with right-wing parties, prevents the Israeli prime minister from taking actions to curb settlement activity. “I think they could do a better job here in enforcing the no-new-settlement policy and in removing some of the settlements,” Frank said.

But Frank’s real issue, the one that caused him to be “ashamed as a Jew,” is ongoing violence carried out by some individuals in the settler community against Palestinian Arabs. Frank referred to a photograph, widely circulated by human rights organizations in the West Bank, of young settlers throwing water at an Arab woman walking nearby. “I do not think enforcement by the Israeli government has been as tough,” he said. “If I can see that picture, why can’t the cops see that picture and arrest them?”

Frank said also that after he learned the details of the flotilla event, it “became clear to me that the people killed weren’t innocent bystanders.” The responsibility, he added, rested on the shoulders of the organizers whose actions led to the use of force. “Once the military body has to use force, things will not always work out well because there is inherent difficulty,” he said.

Despite calls to launch an international investigation into Israel’s actions, Frank said he believed that Israel could investigate itself without fear of prejudice. “The Israeli government, Israeli courts, have the best record I know of a country’s judiciary showing independence.”

Frank was reluctant to weigh in on the ongoing debate within the Jewish community over the alleged silence of liberal Jews on issues relating to Israel. He sees a more nuanced picture: On the one hand, he said, liberal Zionists should embrace Israel as the most liberal nation in the Middle East. (Frank himself gave the example of Israel as a progressive country when he spoke last month in Congress about gays in the military.) On the other hand, he would like liberals to feel free to express criticism they have of the Jewish state. Liberal supporters of Israel should feel free, Frank argued, “to disagree with the government, on the settlement issue in particular,” which he sees as Israel’s “weakest part.”