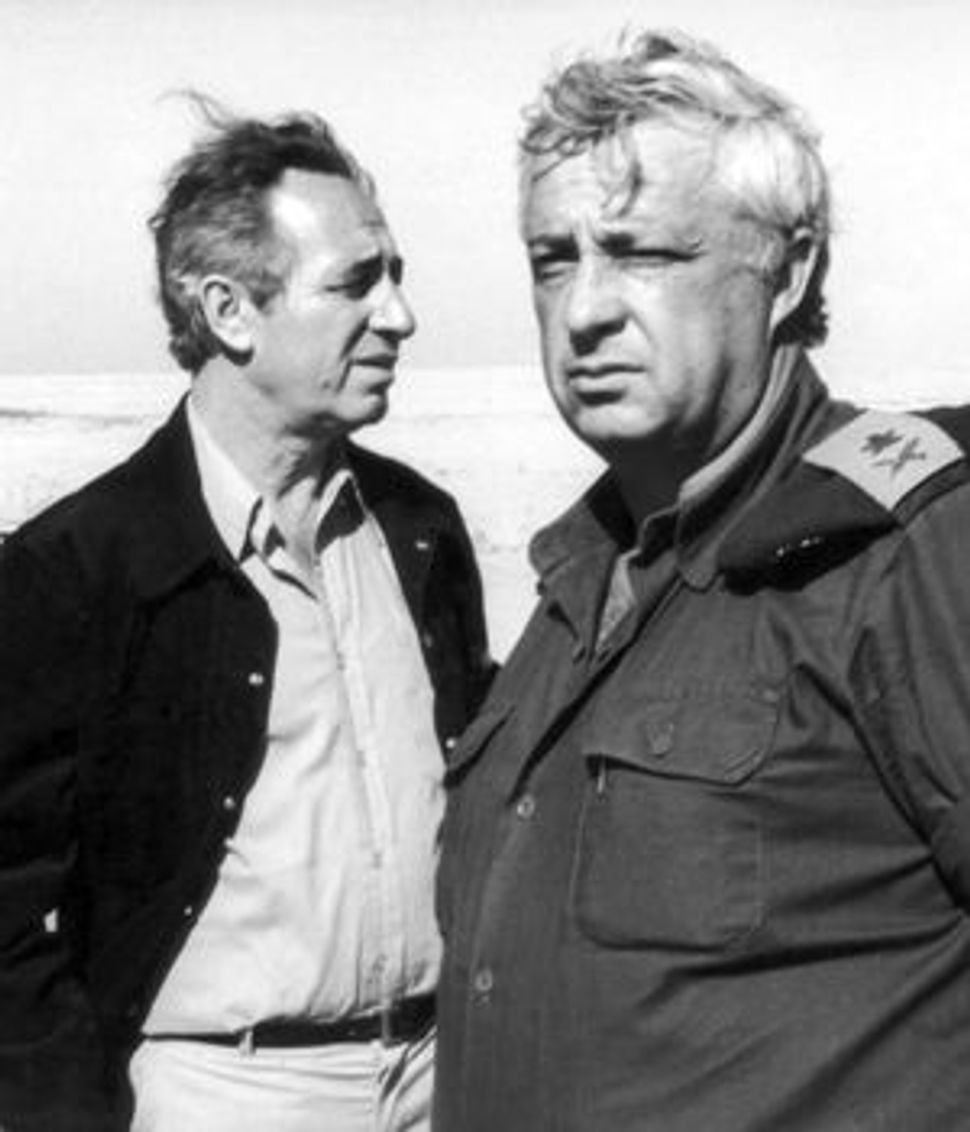 Key Players: In the 1980s, Shimon Peres (left) and Ariel Sharon were closely involved in Israel?s military collaboration with South Africa, according to ?The Unspoken Alliance.? Image by GeTTY IMAGeS

When Random House chose this summer for the publication of Sasha Polakow-Suransky’s new book documenting, for the first time, the extent of Israel’s “secret relationship” with apartheid South Africa, it had the World Cup in mind. The sporting event would put South Africa in the spotlight and the book might benefit from the attention. 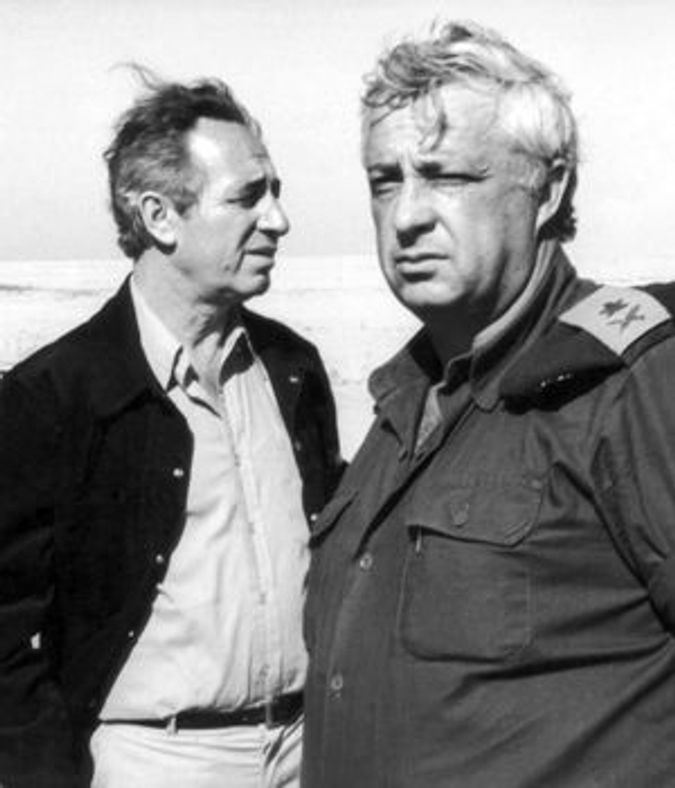 Key Players: In the 1980s, Shimon Peres (left) and Ariel Sharon were closely involved in Israel?s military collaboration with South Africa, according to ?The Unspoken Alliance.? Image by GeTTY IMAGeS

They were thinking too small. Soccer is the last thing that will bring anyone to this book, which, though historical, touches on issues so topical that its release was heralded with a front-page banner headline in the Guardian newspaper.

Polakow-Suransky’s controversial work, “The Unspoken Alliance: Israel’s Secret Relationship With Apartheid South Africa,” examines Israel’s role as apartheid-era South Africa’s leading military supplier, and its willingness to aid the rogue regime’s nuclear arms effort. Now, at a time when Israel itself is criticized for imposing apartheid, or something akin to it, in the occupied West Bank, the book argues that part of Israel’s political establishment felt an ideological kinship with their South African counterparts that went beyond realpolitik.

On a recent morning, Polakow-Suransky, 31, a slight man with closely cropped reddish hair and stubble, sat in his high-ceilinged office in the Upper East Side townhouse where the Council on Foreign Relations is based and seemed to relish the controversy he’s been stirring.

Now a senior editor at Foreign Affairs, the council’s flagship publication, Polakow-Suransky found his own past deeply intertwined with the book he has written. Apartheid was, he told the Forward, the “great moral outrage discussed around the dinner table every night” as he grew up in Ann Arbor, Mich. And Israel was also part of this conversation. His parents were Jewish anti-apartheid activists who exiled themselves in 1973 from South Africa, where his mother had faced arrest for her work.

On the nuclear question, Israeli President and veteran national leader Shimon Peres has denounced “The Unspoken Alliance,” saying Polakow-Suransky’s account of an Israeli offer of nuclear warheads to South Africa in 1975 had “no basis, no foundation in reality.” But Peres and other Israeli officials have been silent about extended cooperation the book documents between Israel and South Africa on other nuclear-related projects. Scientists from both countries, for example, worked to develop a Jericho-type missile system using Israeli rocketry expertise for a nuclear arsenal. They have been silent, too, on the book’s chronicling of Israel’s purchase of South African uranium with safeguards lifted.

That South Africa and Israel were involved in a geo-strategic alliance during the apartheid era has been known for many decades. The relationship even had a public face, with diplomatic visits by South African Prime Minister John Vorster to Israel in 1976. But the extent to which these two countries began to rely on each other economically and militarily in the mid-1970s through the late 1980s has never been so fully fleshed out.

Polakow-Suransky’s innovation was to gain access to the archive of the South African defense ministry, where he found, he said, a “treasure trove” of memos that detailed what kinds of arms were being sold and a high degree of military cooperation.

His search in those archives was part of the research he was conducting for his dissertation at Oxford as a Rhodes scholar from 2003 to 2006. Polakow-Suransky realized that Israel would guard its archives on this topic zealously. And though South Africa has liberal freedom of information laws on the books, he encountered giant bureaucratic obstacles. But a year-and-a-half after making his request, he had in hand copies of the thousands of pages that would either make or break his argument.

“I knew it was there,” he said, about the two countries’ strategic alliance. “You talk to enough people. You knew that something was going on. So the question is can you find the records. My Ph.D. would have bombed and I would have never had a book if the South African defense ministry had said no.”

There are some striking revelations.

Polakow-Suransky said the Guardian “sensationalized” one page in the book that involved minutes from a conversation between Peres and South African Defense Minister P.W. Botha in June 1975 in which Botha expressed interest in buying Israeli missiles if they came with “the correct payload.” Peres answered that the correct payload was available “in three sizes.” The coded language, Polakow-Suransky writes, was a clear reference to nuclear warheads.

Some critics have questioned this certainty. Peres denies Israel made the offer. And Polakow-Suransky himself said, “The deal never came to fruition.”

But more important, he added, “There are a lot of others that did.” Supported by documents in his book, he said, “These guys were building missiles together and testing them off the coast of South Africa throughout the 1980s. The transfer that didn’t happen in 1975 turned into a joint research and development project in South Africa for 15 years.”

For many, this was the unsentimental relationship of two states that turned to each other as each grappled with their pariah status in other parts of the world. But Polakow-Suransky says their relationship went beyond realpolitik. For at least some on the Israeli side, he said, it became a bond of two allies who understood and sympathized with each other’s existential struggles. He sees similarities between Afrikanner nationalism and the revisionist Zionism of Ze’ev Jabotinsky and his ideological heirs.

Polakow-Suranksy singles out comments made by right-wing Israeli figures such as Ariel Sharon, Gen. Rafael Eitan and Revisionist leader Eliahu Lenkin that crossed a line into what he calls “ideological affinity.”

“There is a difference between saying we understand where these people are coming from and why they have to do what they do and actually saying that black people don’t deserve the vote, that Afrikaners deserve to have power,” Polakow-Suransky said. “At some point it went beyond just understanding and it became an actual expression of support for certain people.”

Gideon Shimoni, a professor emeritus at Hebrew University who has written a seminal text on South African Jewry, met Polakow-Suransky early on in his research. They both say that Shimoni advised him to drop the subject because he would never gain access to the needed documents to make his case.

Now that he has read the book, Shimoni is impressed with Polakow-Suransky’s achievement. But he thinks Polakow-Suransky failed to maintain his objectivity in alleging ideological similarities.

“He allowed himself to be too judgmental,” said Shimoni. He cited specifically the book’s depiction of Peres. Even Polakow-Suransky acknowledged that Peres became his big villain, a hypocrite who spoke out against apartheid in public but fostered the relationship in secret.

Polakow-Suransky knows his book might be labeled anti-Israel. But for him, this is not the issue. “There is a certain segment of the American Jewish population that gets angry at anything that makes Israel look bad,” he said. But this, he said, was “a rather simplistic way of looking at the world, and one that privileges Israel’s reputation above the truth.”