Reform Chief Outlines Big Challenges as He Announces His Retirement 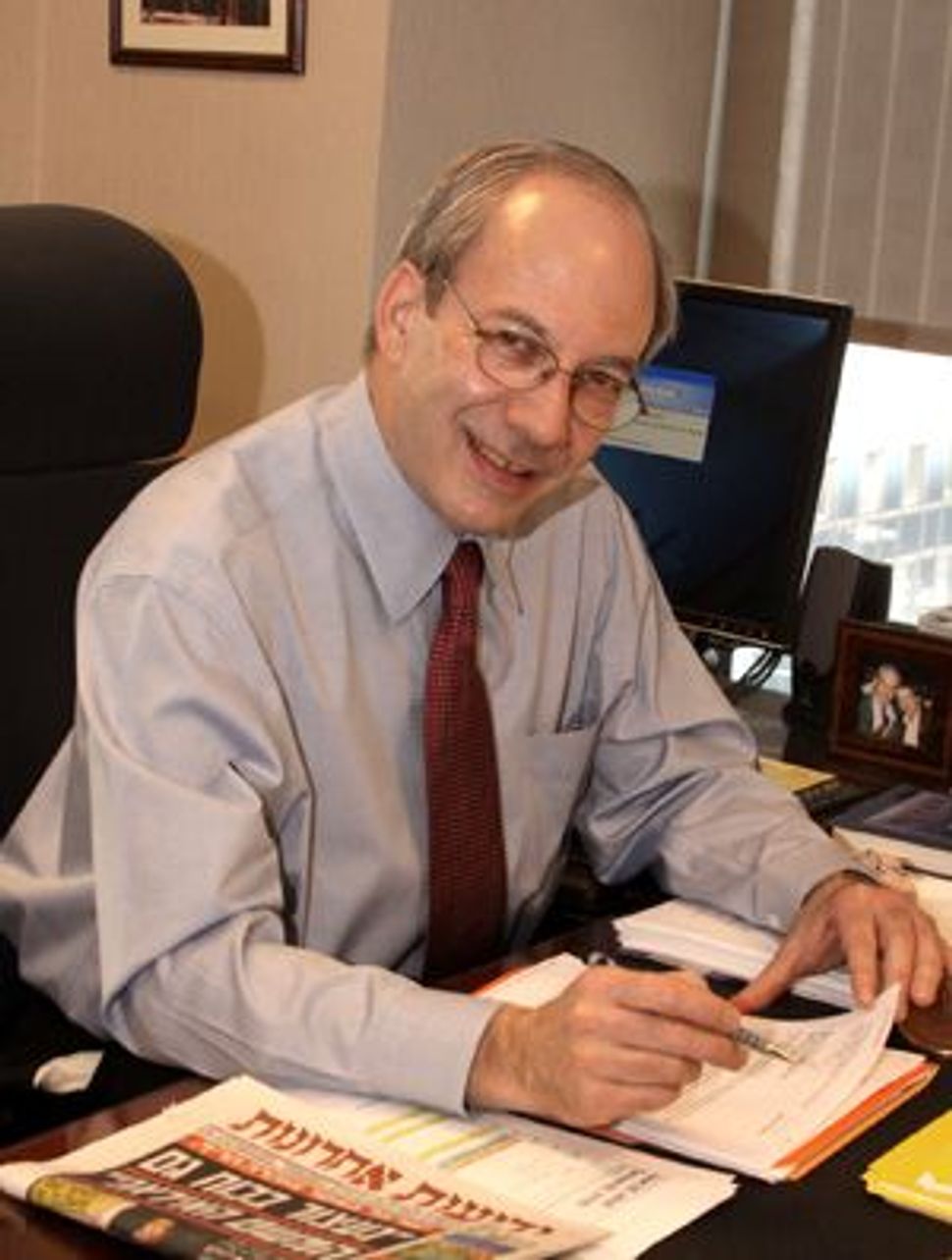 End Of An Era: Reform leader Eric Yoffie works in his office in New York City after announcing he will retire in two years. Image by SHULAMIT SEIDLER-FELLER

In an address at the recent board meeting of the Union for Reform Judaism, Rabbi Eric Yoffie outlined in stark terms some of the greatest challenges facing the organization he has led for the past 14 years. Yoffie spoke of a Reform youth movement that is struggling, and of severe difficulties keeping young Jews involved. 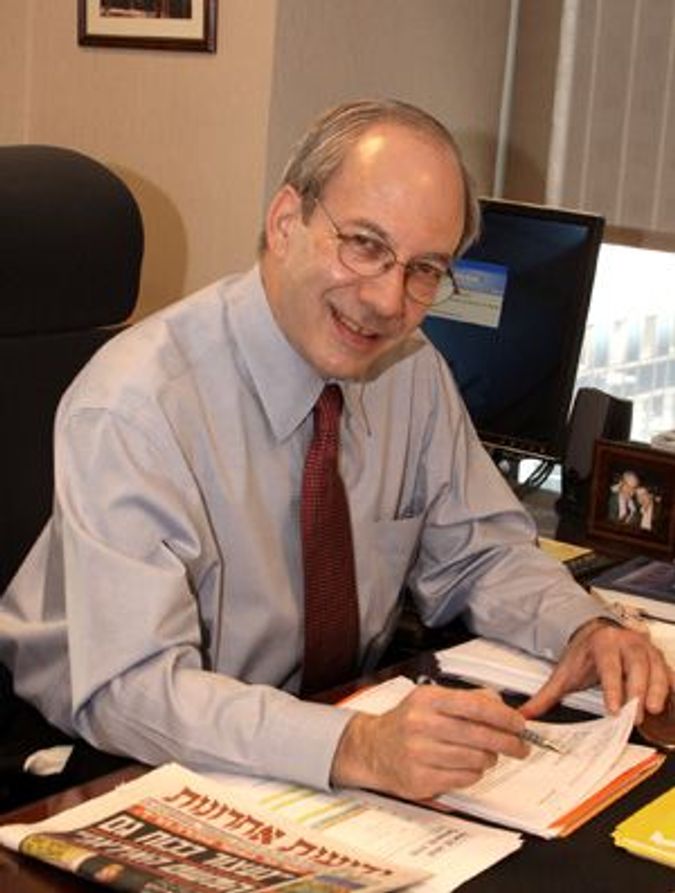 End Of An Era: Reform leader Eric Yoffie works in his office in New York City after announcing he will retire in two years. Image by SHULAMIT SEIDLER-FELLER

But even as he outlined initiatives to address these challenges, Yoffie announced that he will not be at the Reform movement’s helm for much longer.

In his June 10 address, Yoffie told the URJ’s board of trustees that he would retire in two years as the organization’s president. In an interview with the Forward, Yoffie explained that he does not believe that Jewish leaders should stick around forever.

“We keep talking about welcoming new ideas and welcoming new blood and so on,” said Yoffie, who has noted that he will be 65 by the time he retires. “The truth is, you need to set an example in that area as well.”

Since assuming the URJ’s presidency in 1996, Yoffie has been outspoken on political issues. He has been a strong supporter of the Israeli-Palestinian peace process, while also crossing swords with some on the Jewish left whom he has accused of giving short shrift to Israeli security needs. In domestic affairs, he has championed liberal causes such as gun control and gay rights.

Religiously, Yoffie has been a proponent of increased traditionalism within Reform Judaism, a broad trend that has gained sway within the movement as the prevalence of so-called Classical Reform practices gradually receded. In particular, he has urged a greater focus on Jewish text study and prayer. In a 2007 speech he lamented that Saturday morning services in Reform synagogues had been surrendered to bar and bat mitzvah ceremonies to the detriment of the overall prayer experience and urged Reform Jews to expand their observance of the Sabbath.

Yoffie acknowledged, however, that the Reform movement has had mixed results when it comes to engaging younger Jews.

“We have focused on the committed core, with some success. Was that a mistake? The answer is, I tend to think not,” Yoffie told the Forward. “Having said that, I think the time has come to move beyond that. It’s not sufficient to have a committed core.”

Reform rabbis and academics contacted after Yoffie’s speech hailed his accomplishments, even as they acknowledged that the Reform movement faces considerable challenges. Several pointed approvingly to Yoffie’s work on Jewish education and his handling of the current financial crisis, which has required steep cutbacks and reorganization at the URJ.

“He has been a significant leader through good times and tough times,” said Rabbi Laura Geller, senior rabbi at Temple Emanuel in Beverly Hills, Calif. “He had the difficult challenge of refocusing priorities for the union under very difficult financial circumstances, and I think with good leadership he was able always to keep his eyes focused on being clear on what the mission of the union was.”

“I would say his main contribution, without any question, was in the area of education,” said Michael Meyer, a professor of Jewish history at the Cincinnati campus of Hebrew Union College-Jewish Institute of Religion, the Reform movement’s seminary. Meyer and others cited a program called 10 Minutes of Torah as emblematic of Yoffie’s emphasis on adult Jewish learning. The program encourages Reform Jews to read short Jewish texts that are delivered daily to their e-mail inboxes.

HUC’s president, Rabbi David Ellenson, also credited Yoffie with advancing what he called “worship renewal” among Reform congregations. Ellenson said that Yoffie was instrumental in pulling together a number of different trends in Reform prayer that incorporated new types of music and modes of expression and putting them “into the forefront of Reform Jewish worship.”

Yet Yoffie’s address announcing his retirement plans did not dwell on his accomplishments. According to a transcript of the speech posted on the URJ’s website, Yoffie told the organization’s board: “We have seen the decline of our youth activities to dangerously low levels, and we are not now providing our kids with the staff and the resources that they desperately need.” He also pointed to deficiencies in the ability of Reform synagogues to keep young people involved, warning that “if current trends continue, approximately 80% of the children who have a bar/bat mitzvah in our congregations will have no connection of any kind to their synagogue by the time they reach 12th grade.”

Steven M. Cohen, a research professor of Jewish social policy at HUC’s New York campus, said that the Reform movement is declining in numbers. Based on his analysis of URJ figures and historical data from the 2000-01 National Jewish Population Survey, Cohen estimated that the number of Jews living in households that belong to Reform congregations has declined 18% over the past 10 years, assuming a decrease in the average number of Jews per household based on increased levels of intermarriage.

URJ officials, however, disputed Cohen’s calculations, although they were not able to offer their own analysis as of press time. Yoffie, however, maintained that the movement is holding steady in terms of its numbers.

Still, the movement does not appear to be growing, a contrast with previous decades in which the Reform movement overtook Conservative Judaism as America’s largest Jewish religious stream.

“I think Eric was in the driver’s seat as this occurred, as was I and about 2,000 other Reform rabbis,” said Rabbi Lance Sussman of Congregation Keneseth Israel in Elkins Park, Pa.

Sussman attributed what he perceived as a decline to broad trends toward religious disaffiliation in America as a whole, alongside demographic changes in the Jewish community, rather than to leadership failures. “It’s surfing a tough surf now,” he said.

Still, Sussman said that he saw this moment as an opportune one for a change at the top. “As the face of the movement he did a very fine job,” Sussman said of Yoffie. “I think things have shifted to the interior of the movement….My sense is that the agenda is changing so dramatically now that maybe it’s best to assemble a new team from the top, and in that sense it’s a very gracious move on his part.”

Reform Chief Outlines Big Challenges as He Announces His Retirement