Self-Defense or Just Another Exercise Fad? 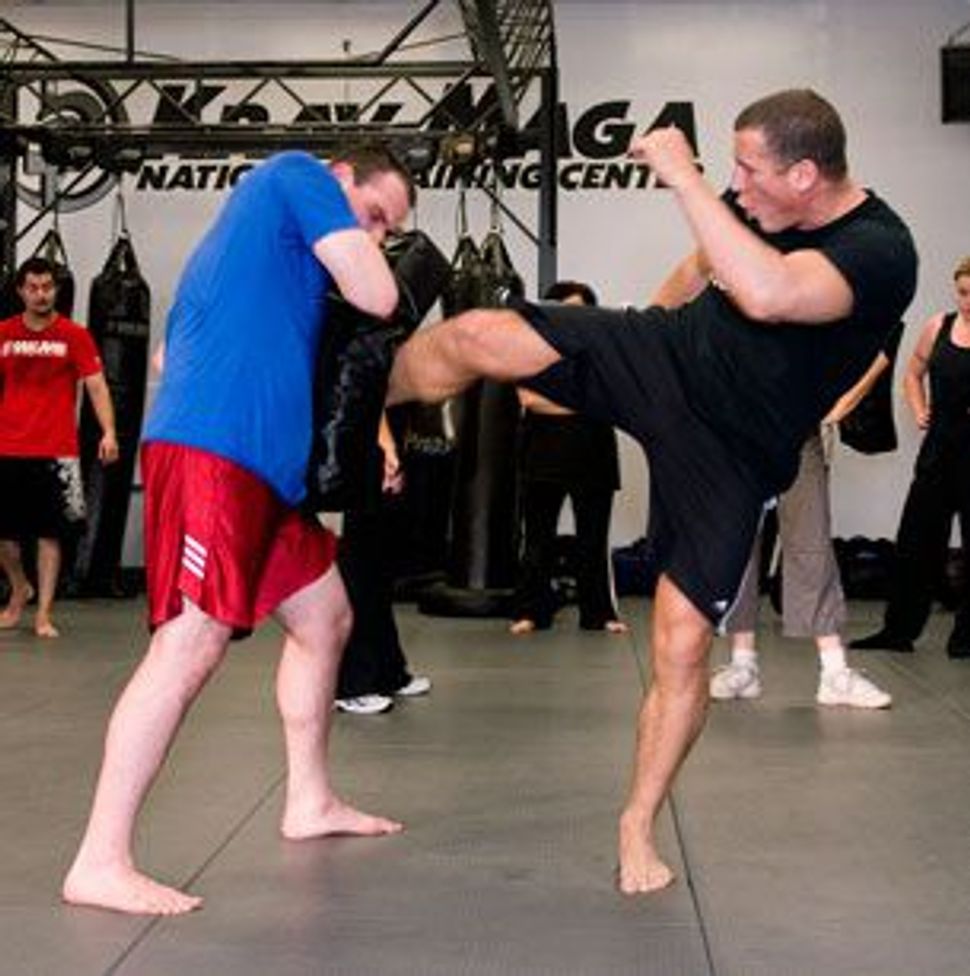 The class begins with a bow to a picture on the wall of Imre “Imi” Lichtenfeld, a slight, balding man who looks more like a grandfather than a self-defense guru.

Then the yelling begins.

“Stand on the line!”

It’s Monday night and the onslaught of commands renders most faces expressionless. Several jumping jacks and a dozen push-ups later, the instructor welcomes the class to Krav Maga Worldwide in West Los Angeles, headquarters to a growing number of workout studios across the country that train people to defend themselves like Israeli soldiers.

This is not martial arts, the instructor says. Krav Maga (pronounced KRAHV ma-GAH) is a system that teaches you how to hit hard and defend yourself.

It’s also an exotic concept for Americans who grew up in a world far from where Israeli commandos roam.

Tonight, hands are bound in boxing gloves, eyes are fixed on punching bags and minds focus on an image of Krav Maga founder Imi, who, I imagine, would instruct us to “do as I say unless you want a fat lip.” The appeal is part cultural phenomenon, part masochistic workout trip and part opportunity to role-play as an Israeli soldier who must defend himself with brute force. 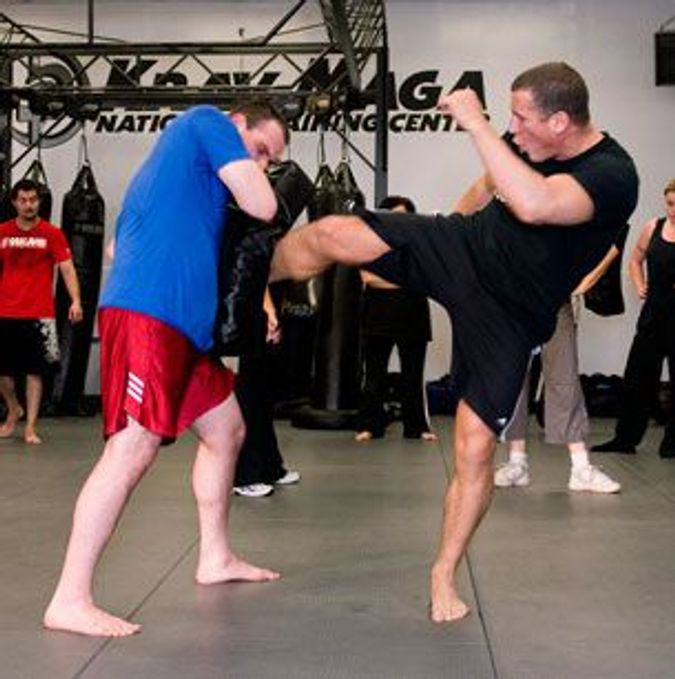 The instructor tells us to find a partner and a punching cushion. The class obediently follows his lead and begins to strike the cushion, fists clenched, thumbs rolled over fingers to avoid broken knuckles.

The partner with the cushion must exhale with each strike to prevent getting the wind knocked out of him or her. Inevitably, punches get through.

Recovering from the impact, I focus my eyes on the Krav Maga logo on the instructor’s shorts. The logo consists of two Hebrew letters: the kof for “Krav,” which means combat, and mem for “Maga,” which means contact. Both letters appear in a circle with an opening at the top and bottom, symbolizing the defense system’s ability to adapt and evolve.

Imi introduced the discipline to Israel in the late 1940s after initially developing it on the streets of his Jewish neighborhood in Bratislava, a city in Eastern Europe that saw increasing anti-Semitic violence in the 1930s. He eventually immigrated to Israel and became a physical training instructor for the Israel Defense Forces. Krav Maga soon gained prominence and became the official hand-to-hand combat technique used by the IDF.

Instructor Mike Margolin was introduced to the method nearly three decades ago at Heschel Day School, a Jewish elementary and middle school in the San Fernando Valley.

“Jews can relate to Krav Maga because it’s empowering,” a concept that was important on the heels of World War II, he said.

But empowerment has a different ring to it today in Israel. To some, the IDF is increasingly perceived as an oppressive force. Krav student Darah Kabot, 33, prefers to separate her politics from her elbow strikes.

“I do Krav because I want to learn how to fight,” she said. “And I’m a converted Jew who isn’t especially pro-Israel right now, but that really doesn’t factor into my choice to do Krav Maga.”

The question is how many practitioners identify with the cultural and political implications of Krav Maga compared with the efficacy of the self-defense system.

In Los Angeles, approximately 3,000 people practice Krav Maga, and a majority of them are not Jewish, Margolin says.

Kelly Campbell, the highest-ranking female instructor at Krav Maga Worldwide in Los Angeles, said cultural roots have nothing to do with the appeal of the discipline. “I’m not Jewish, and I really took to Krav without having a background in martial arts,” she said. “The defense skills I learn give me confidence.”

Confidence runs thin when the evening’s workout suddenly calls for knee thrusts to the stomach. This time, the instructor tells the class to find a larger cushion that will protect the lower abdomen and groin. One partner simulates a chokehold, while the other rips the offender’s hands away from the neck and then thrusts a knee into the stomach. My partner isn’t getting the technique right, so the instructor demonstrates on me. He leaves a lasting impression.

Whether with clothes, jewelry or even Dead Sea salt, American Jews have been trying to connect with Israel for decades.

The connection to the Israeli warrior didn’t climax until the Six Day War in 1967. In subsequent decades, that connection has dwindled, according to Shaul Kelner, assistant professor of sociology and Jewish studies at Vanderbilt University in Nashville, Tenn.

“There is no doubt that Krav Maga is a way for some American Jews to connect with Israel, but the connection to the warrior doesn’t exist with the same force,” he said. “The popularity of Krav has more to do with the niche marketing of American fitness and the concept of another exotic dimension.”

Los Angeles Hebrew High School introduced Krav Maga as an elective about five years ago because “it connects our students to Israel, and there is a sense of pride in the military that carries through with the ability to be empowered,” said Erica Solomon, faculty member and administrative coordinator.

Mike Burton, an instructor and comedian who changed his last name from Schwartz to avoid anti-Semitism, said that playing the aggressor has never been the appeal of Krav Maga.

“It’s knowing that if someone tries to harm you, you can strike back with as much or far greater force, and there’s some pride in that for Jews, given our history,” he said.

But my only pride leaving the studio that night was knowing that my right knee was still working and my glasses were intact so that I could read the sentence on the wall behind the photograph of Imi: “So that one may walk in peace.”

Evan Pondel is a freelance writer living in Los Angeles.

Self-Defense or Just Another Exercise Fad?