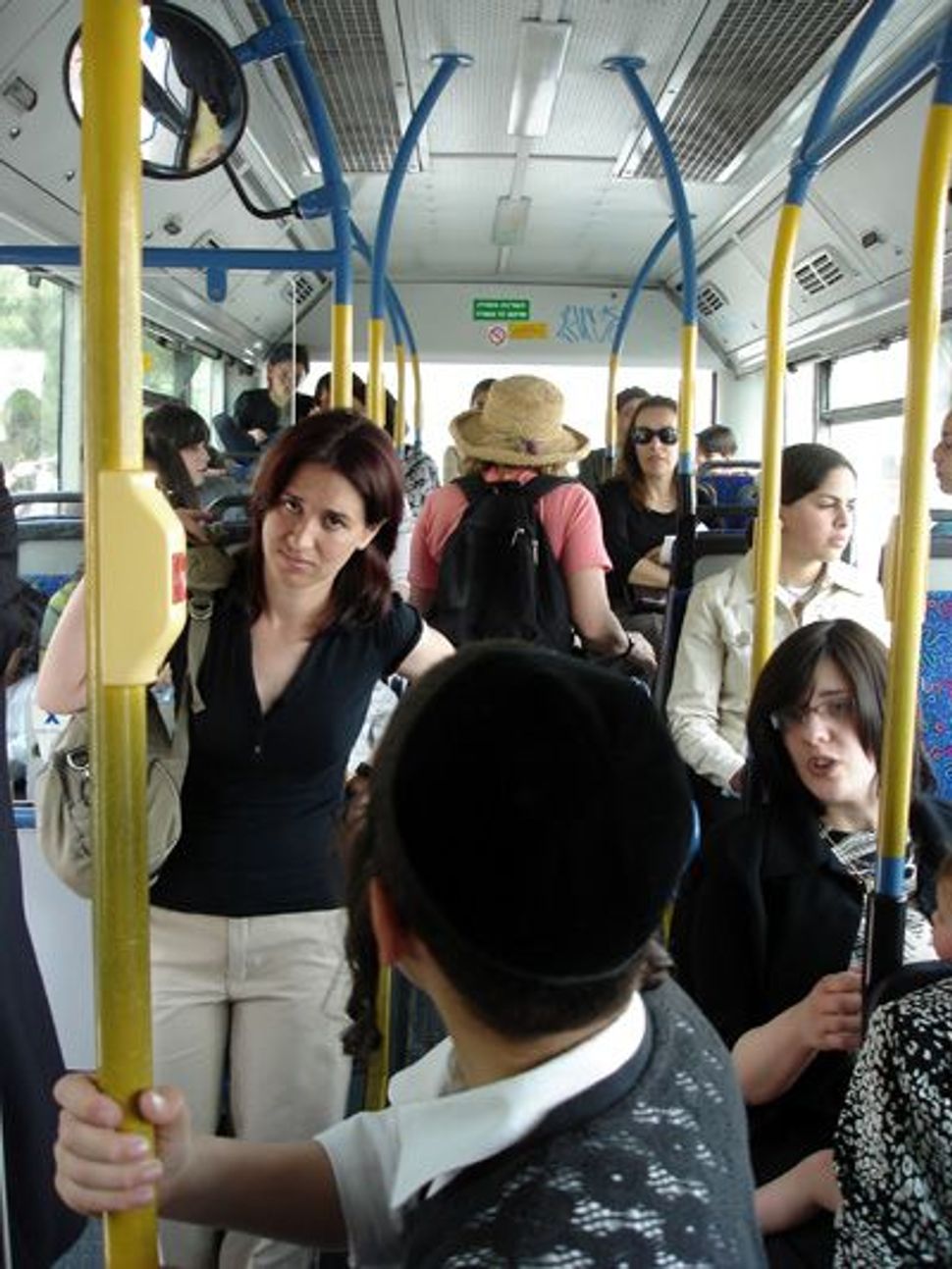 Back Of The Bus: Women must ride the back of the bus and men ride up front on several public transportation routes heavily patronized by Orthodox Jews in Israel. The recent development has sparked some protests, but on board the buses even secular riders comply. Image by Rahel Jaskow

“Hey, lady!” yelled the bus driver. He was loud but friendly. “You forgot your Psalms booklet.” 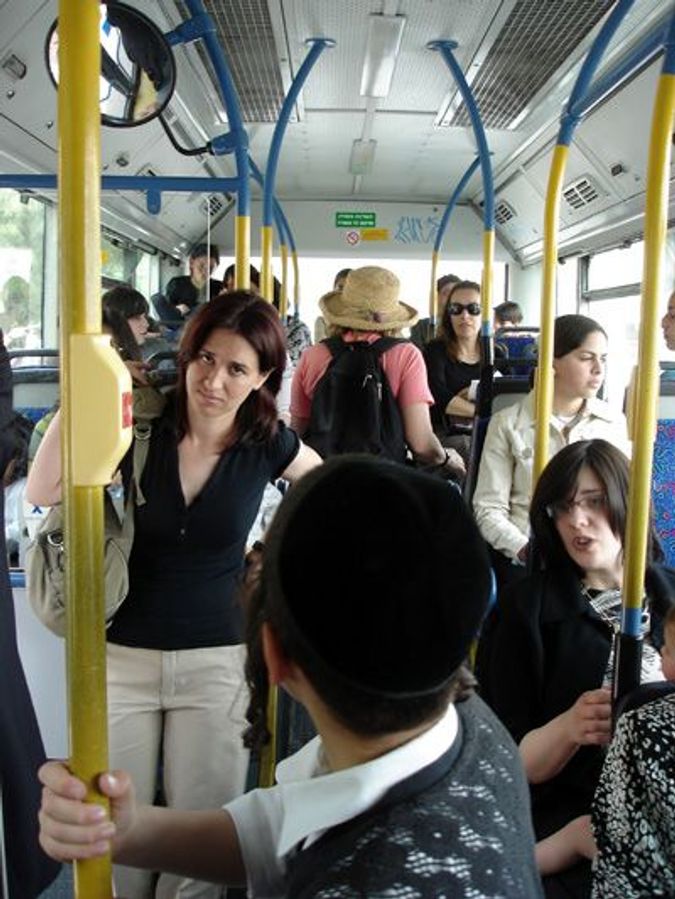 Back Of The Bus: Women must ride the back of the bus and men ride up front on several public transportation routes heavily patronized by Orthodox Jews in Israel. The recent development has sparked some protests, but on board the buses even secular riders comply. Image by Rahel Jaskow

It was a typical weekday afternoon in Tel Aviv, Israel’s secular metropolis, and the Route 322 bus is picking up its first passengers as it gets going to Ashdod.

On this particular 322, the driver, a jolly middle-aged man with a mop of gray hair and a distinctly non-Haredi yarmulke balanced on top, has come up with an innovation: When you pay your fare, you receive a ticket in one hand and in the other a booklet with a passage from the biblical Book of Psalms.

Each passenger’s booklet contains a different passage and the idea is that if all the booklets are in use at the same time, passengers together will recite the entire Book of Psalms, which would be seen as a religious achievement. This trip, the driver hopes, is to be a spiritual journey in the literal sense.

The 322 is the only autobus mehadrin running to and from Tel Aviv. The phrase autobus mehadrin, a new addition to the Israeli lexicon in the last decade, literally means beautified bus. It refers to a route that meets Haredi standards of modesty: Men sit at the front and women at the back.

Critics say that these routes — around 60 in number — are anything but beautiful. They claim that the segregation they practice is religious coercion at its worst because if non-haredim refuse to comply with the separation of the sexes, violence sometimes results.

Last March there were two acts of protest against the buses. One involved the hanging of posters opposing them in several Israeli cities. In the other, demonstrators marched outside Prime Minister Benjamin Netanyahu’s Jerusalem residence.

The gender-segregated buses are also the subject of an ongoing case before the High Court, in which five women, including New York-born novelist Naomi Ragen, have questioned their legitimacy. On the judge’s instruction, the Transportation Ministry convened a committee to formulate a policy regarding these buses. The committee recommended outlawing them, but Transportation Minister Yisrael Katz said they should continue. The High Court is deciding how to go forward.

On paper, one might expect the 322 to be a route where stand-offs are common. The buses run through and pick up passengers in parts of secular Tel Aviv. Most of the other gender-segregated lines serve only Haredi areas. But the day I rode the 322, the journey was extremely calm. The regulars say it always is.

The bus started out in the religiously diverse Ramat Hachayal neighborhood in northern Tel Aviv, close to the section of the city where most Haredi residents live. Although on many mehadrin buses, women board at the back and men at the front, on this bus everyone boarded together at the front.

One passenger was a secular woman originally from the former Soviet Union, evidently a first-timer on a mehadrin bus. When the driver explained the seating convention, she complied matter-of-factly.

Another, a young Haredi man with a light wispy beard who wore traditional dress, was happy to discuss his views on segregated routes.

Keeping away from women other than one’s wife and family members, said the 20-year-old Tel Aviv resident, is basic Jewish law, and he tries his best to travel only on segregated lines. To show the way he keeps his thoughts pure on nonsegregated lines, he gestured, raising a hand to each side of his eyes, like blinkers.

This young man, a Hasid from the Skver sect, has grown up in a Haredi world with enough political and financial clout to get Israel’s Transportation Ministry to establish niche services catering to his religious lifestyle, like the mehadrin buses. He believes Haredim should continue to push for segregation in other areas of public life.

Another passenger, a middle-aged Ashdod resident in his 50s, disputed the claim made by many critics that the mahadrin buses reflect a newfound Haredi strictness on gender mixing. Transportation has always been difficult for Haredim, he said. In the past, whenever he found himself seated next to a female, he felt the need to move to avoid the risk of brushing legs with her, the man explained. To him, segregated buses were a logical solution to a long-standing problem. But he said that if a woman insisted on sitting at the front of the bus, he would not confront her.

As more passengers boarded, men from similar backgrounds gravitated toward each other. The subtleties of the dress of Haredi men tell the informed observer to which community they belong. After a few minutes on the bus, Hasidic men were at the front, non-Hasidic men behind and, still farther behind, a couple of yeshiva boys of what Haredim call a “more modernisher” bent, discernible from the fashionable touches to their Haredi outfits.

Though there was no indication it was intended, this configuration placed the men’s distance from the women’s section in direct proportion to their community’s zeal for segregated buses.

The atmosphere was friendly, and most male passengers had a like-minded neighbor to chat with. In the men’s section, chatting generally won out over reciting Psalms.

In the women’s section, as my travel companion told me afterward, the dynamic was different. There, passengers from different sects and backgrounds sat together, and camaraderie developed, even between the extremely observant and the non-religious.

The main social glue, seemingly, was the presence of children, who traveled with mothers, not fathers. At one point, a woman got off the bus and, seeing a stranger about to board, carried the new passenger’s baby on board, leaving her free to cope with her bags and her other children.

Both women in this case were Haredi, but this kind of camaraderie extended to secular female passengers, as well.

In the women’s section, reciting Psalms was taken much more seriously. Everyone read their Psalm booklets — even secular passengers, creating a sense of shared mission. When the woman who received help boarding got to her destination, a secular woman jumped up to help her alight.

Psalms weren’t the only pastime in the women’s section. There was also a soap opera of sorts going on: The Drama of Yael. Will she or won’t she? The quest for love was audible for all to follow. A pretty 19-year-old from Bnei Brak, Yael wasn’t actually on the bus. But her matchmaker, who described her in detail, was, and she was determined to use the journey to find a shiduch, or match.

The matchmaker could not have been more different from the iconic Yente of “Fiddler on the Roof.” This matchmaker was in her early 20s, attractive, immaculately dressed in a below-the-knee skirt and sweater, and carefully made up.

To witness her at work was gripping. Phone calls were made to possible suitors, friends of friends were sounded out and people called back for more information.

When questioned about the bus, women on the 322 were less focused than men on ideology, but more on punctuality, pleasant atmosphere and price.

One secular woman, a middle-aged French-born immigrant wearing leggings and a T-shirt, said she found the bus reliable and had no objections to taking a segregated service. A Haredi woman in her 20s, dressed in a pink long-sleeved shirt, long black skirt and stockings, was enthusiastic about the price. Her ticket home from Bnei Brak to Ashdod cost 10.50 shekels, compared with a 15-shekel fee on the mainstream, non-segregated bus service run by Egged, Israel’s largest bus company. Route 322 is not operated by an ideological bus firm but by Veoila Transportation (formerly Connex), a French-based multinational that also operates in North America. Like many firms that cater to the Haredi community, where incomes are lower, Veolia undersells its secular counterpart in order to make itself affordable to this extremely cost-conscious community.

A morning spent observing buses in predominantly Haredi Bnei Brak followed by a ride on the 322 provides fresh insight to the mehadrin bus row. At a time when Israelis are turning away from buses to cars and trains, every segregated route was busy.

The 322 we took set out in mid-afternoon, quiet time on most buses, and traveled almost at capacity with a diverse group, men and women of all different ages and from different Haredi groupings. But for the bus companies, there was no mystery here.

In Israel, bus companies catering to the Haredim have a whole demographic begging for bus lines. It is a demographic that owns fewer cars. And its members have big families, so even when there is a car, it may not hold everyone. This demographic is always on the move, attending simchas, visiting family members and religious leaders.

And the rabbinic fanfare given to each new line is more effective than any ad campaign.