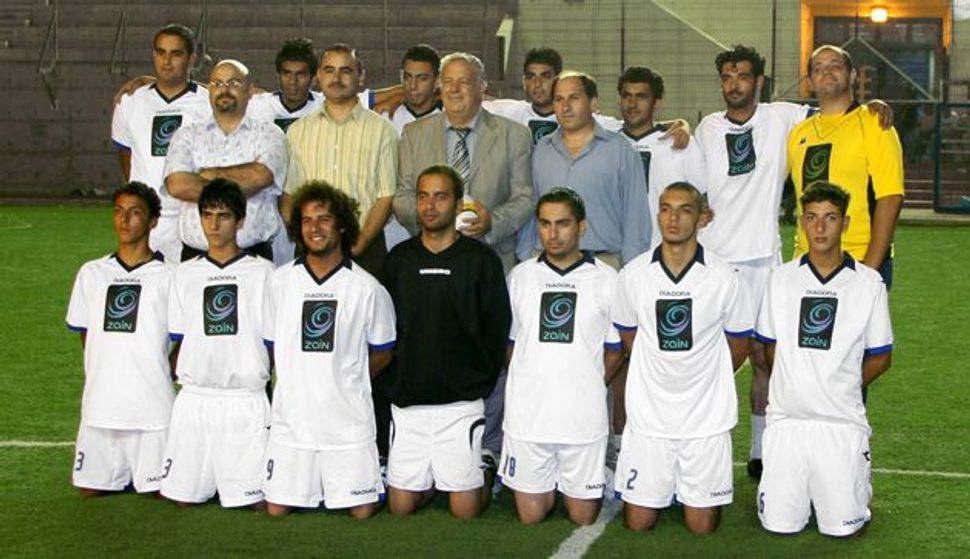 Common Ground: ?The Team? places soccer players at the center of a TV drama about the realities of Palestinian life. Image by MA?AN TV & SEARCH FOR COMMON GROUND

Under a full moon in Bethlehem’s Manger Square, two lovers recite poetry — the late Palestinian national bard Mahmoud Darwish’s words of affection and longing. Shadows cast on the stones of Christ’s birthplace merge. The scene shifts to an acrimonious meeting at a sports club. Debate flares over which game to watch and over politics. One club member declares, “We should live the way we believe.”

Welcome to “The Team,” a 30-part television drama that began broadcasting on the Palestinian Ma’an Network on June 11, the first day of the World Cup.

Shift back to last fall, as I travel from Jerusalem to meet the series’ creators and to watch filming. Leaving Mount Zion, I take a cab to the border. After passing the neighborhood of Talpiot and the settlement of Gilo, I arrive at the checkpoint. In a large concrete and barbed-wire structure, in front of glaring soldiers, rows of Palestinians present documents and wait to be fingerprinted. On the Palestinian side, I enter a cab, whose driver points out places that evoke the gospels — King Herod’s imposing palace-fortress Herodium, and Shepherds’ Field, where an angel appeared to reveal “good tidings of great joy.”

Near the Ma’an station, I pass a sign, “Palestinian Conflict Resolution Office,” and another, “Committee for the Freeing of Political Prisoners.”

I meet first with the show’s creator, writer and director, Nabil Shoumali. He has directed and produced episodes for the Palestinian version of “Sesame Street” and numerous documentaries.

During a screening of the first episode of “The Team,” Shoumali jokes that the drama is a “soap opera for social change.” The show contains romantic entanglements and power struggles, but it is distinguished by its window onto the political and social realities of Palestinian life under occupation, with a strong inclination toward resolving those problems creatively and peacefully.

The political events affecting Palestinians’ daily lives, including economic hardship, land confiscation and resistance weave seamlessly into the plot. We see the effects of high unemployment as two players sneak into Israel for work. Another player flees the Israeli army, while a fourth is injured by a rubber bullet during a demonstration and is later arrested by Israeli soldiers at his hospital bed. These echo the recent history of the Palestinian national soccer team, which lost players to Israeli attacks and arrests.

Gender relations are an important theme. Zeinah, mother of one of the players, decides not to marry her late husband’s brother, as dictated by custom, but instead begins studies at Bethlehem University. After a student is murdered in an “honor killing,” she writes a strongly worded open letter to Palestinian society condemning the horrific practice and challenging existing mores.

Without compromising on entertainment, Shoumali and his fellow creators emphasize the rule of law and freedom of association, challenges faced by women, peaceful conflict resolution and the importance of pursuing one’s dreams. Placing an athletic club at the center of the action evokes the early history of Palestinian sports, when such clubs were centers of cultural and political life and identity-building.

In conversation, Shoumali expresses his appreciation for the game’s beauty. The show features children playing soccer in the street like their brethren around the world, their shirts bearing the names of soccer heroes.

“We wanted to transmit values of peace and to do that you need to convince, not impose,” Shoumali says. An ex-Marxist, he emphasizes the importance of living together with the Israelis and of communication, with each side recognizing the other’s humanity. “War is the corpse of all civilized things … our dreams should be connected,” he says.

Cinematographer Mohammad Fawzi echoes this desire for a peaceful and just solution to the Arab-Israeli conflict. Asked about his connection to sports, he responds that during the second intifada, he and other cameramen got all the exercise they needed dodging bullets. Fawzi worked for Dutch TV and for Al Jazeera. His film, “Siege,” about the blockade Israeli forces imposed on Palestinian fighters taking refuge in the Church of the Nativity, won awards at the Tunis and Cairo film festivals.

I also meet Raed Othman, Ma’an’s general director. His house was destroyed during an Israeli bombing, and a missile killed his uncle. Yet Othman emphasizes the need to be active in shaping one’s individual and collective identity.

“Palestinians always show the victims, the evils of the occupation,” he says. “That exists, but we wanted to concentrate on the personal lives, what happens at home, relations between people. We are presenting a new look at the Palestinians.… With drama, we can speak about our dreams, how to build things together, how we will be when we have our own state.”

“The Team” is a co-production of Ma’an, an independent non-profit Palestinian media network, and Search for Common Ground, a conflict resolution NGO that creates radio and television programs offering alternatives to conflict in places where ethnic and national enmity prevail, such as Kenya and Indonesia. The Palestinian series is one of a half dozen versions of “The Team,” which have aired in African, Asian and Middle Eastern countries. It will soon be followed by an Israeli series based in the city of Ramla, where Jews and Arabs live side by side. By the end of 2010, 18 versions are slated to have been completed.

Later in the day of my visit, crews film scenes at a match between Palestinian team Shabab Al-Khalil and Jordanian team Al-Wihdat Amman. The match takes place in the crowded Al-Hussein stadium in Hebron, and spectators include Palestinian Prime Minister Salam Fayyad. The importance of the sport to Palestinian national aspirations and sense of identity is also clear a month later at a game between the Palestinian and Jordanian national women’s teams, witnessed by 12,000 people.

As I leave the studio and head back to the border crossing, we drive past a half-built structure. “Hotel Paradise,” a sign declares.

Alon Raab teaches religious studies at the University of California, Davis, and is co-editor of “The Global Game: Writers on Soccer” (University of Nebraska Press). He is a right-winger, but only on the playing field.