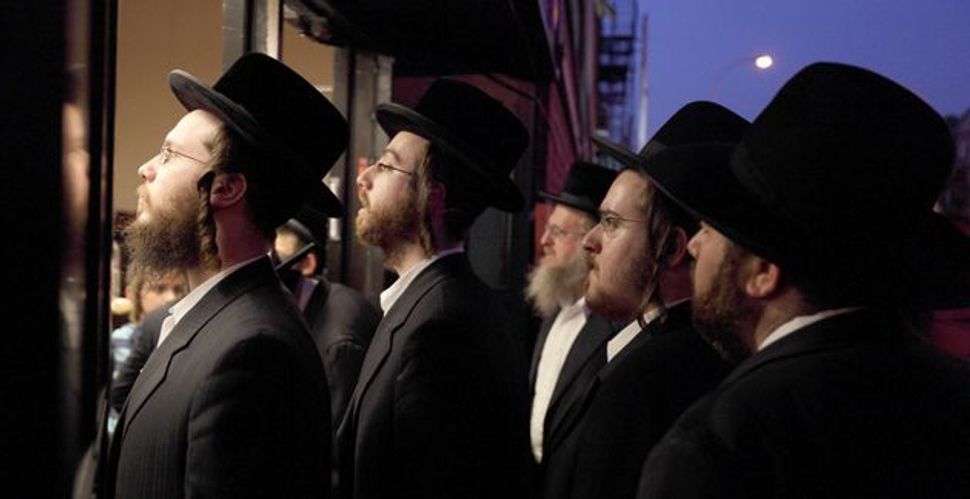 Overflow: Some Rubashkin supporters watch the June 21 Brooklyn rally from the street outside. Image by CLAUDIO PAPAPIETRO

A wave of outrage rippled through New York’s Haredi community, crossing the usual ultra-Orthodox divisions, in response to the June 21 announcement that Agriprocessors executive Sholom Rubashkin would be sent to a federal jail for 27 years for bank fraud, with no possibility of parole.

The heated emotions were in evidence on the night of the announcement, as several thousand people from a variety of Hasidic and other ultra-Orthodox groups crammed the streets of Brooklyn’s Boro Park neighborhood. Crowds gathered around movie screens set up outside Bais Yaakov, a large hall on 15th Avenue, where a pro-Rubashkin rally and fundraiser was taking place. Inside, a sea of tightly packed black hats massed beneath a dais where the white-bearded luminaries of the Haredi world sat, many holding their worried faces in their hands.

Watch footage from the rally below:

“Today a dagger was thrust into our hearts!” yelled Pinchos Lipschutz, who is the editor and publisher of the Orthodox Yiddish newspaper Yated Ne’eman and is one of the few who spoke to the gathered thousands in English and not Yiddish.

News of the 51-year-old meatpacking executive’s sentence hit when Linda Reade, the presiding federal district court judge in Cedar Rapids, Iowa, unexpectedly released a memorandum explaining her decision a day before the official sentencing. Rubashkin, who managed the now-defunct slaughterhouse and meatpacking plant in Postville, Iowa, owned by his family’s huge kosher meat enterprise, was found guilty last November of 86 counts of financial fraud. He had misrepresented his company’s financial state in order to maintain its line of credit from two banks and keep the business afloat.

Even some of Rubashkin’s harshest critics in the Jewish community expressed surprise at the severity of the sentence. By comparison, junk bond king Michael Milken, who pleaded guilty to six securities and reporting violations in 1989, ended up serving two years in prison, though he also had to pay a $1.1 billion fine. And Dennis Kozlowski, former CEO of Tyco International, was sentenced in 2005 to anywhere from eight years and four months to 25 years in jail for receiving $81 million in unauthorized bonuses. His first parole hearing comes up in 2012.

The loss to the financial institutions that Rubashkin defrauded was estimated at $26 million. In addition to his prison sentence, Rubashkin will have to pay the banks this amount in restitution.

Those who defend Rubashkin have long contended that the federal government has handled the case unfairly. Months earlier, the government dropped charges that Rubashkin was responsible for the company’s hiring of illegal immigrants. And in a separate trial in June, Rubashkin was acquitted of charges that he violated child labor laws (though the company itself pleaded guilty at the outset of the trial, to multiple charges of abuse of underage laborers).

That left the bank fraud charges the government ultimately pressed against Rubashkin.

The prosecution recommended that he receive 25 years. Reade added an additional two years because, she wrote, Rubashkin had perjured himself in court, offering statements that he knew were “inaccurate and untruthful.”

Reade also rejected Rubashkin’s attempts to reduce his jail time by pointing to the role he played in providing affordable kosher meat to his community and by noting his charitable endeavors.

“It is entirely possible that a number of Defendant’s charitable deeds were funded with proceeds from his crimes,” the judge wrote in her sentencing memo. “It is far easier to be generous with someone else’s money instead of one’s own.”

Nevertheless, it was Rubashkin’s selfless character that was the crux of the matter for those at the pro-Rubashkin rally protesting Reade’s sentence. The night began with a video slideshow presenting Rubashkin as a family man who consistently acted for the good of his community. Images of his 10 children alternated with photos of Rubashkin wearing a hairnet and examining meat at the plant. Mournful cantorial music played in the background. The speeches that followed were equally dramatic, with most culminating in tears. One rabbi, Avrohom Schorr from Tiferes Yaakov in the Flatbush section of Brooklyn, repeated continually in Yiddish the number of years that Rubashkin would serve — zibn un tsvantsik yor — crying the whole time.

The other purpose of the evening was to fundraise for what the organizers said were Rubashkin’s hefty legal bills, which totaled $2 million, according to one speaker. Dozens of booths were set up to take contributions, and large posters suggested donations, all in multiples of 27, up to $2,700. Money will also be needed for the appeal that Rubashkin’s lawyers plan to file.

Besides pointing to his character, the speakers described the sentence as anti-Semitic. Lipschutz expressed this sentiment, as well: “Once again, a Jew has been scapegoated, a libel has been created and given credence by a court.”

Outside, the floodlit streets were crowded with Hasidim milling around on the warm summer evening. Many people said they didn’t think Rubashkin was totally innocent, but they did think he was being unfairly punished. Others thought the whole case was fabricated as a way of attacking the ritual of kosher slaughter.

“This is just like Dreyfus! J’accuse!” said Mordy Getz, 28, a tall man who wore a large red beard and stood underneath one of the big screens that was broadcasting the rally. “They won’t kill him, but they’ll just lock him up for decades and destroy a whole family.”

In Postville, Aaron Goldsmith, a Chabad rabbi who is close to the Rubashkins, said he thought the heavy sentence would finally expose what he called “an agenda-driven prosecution.”

“She finally revealed her cards,” Goldsmith said, referring to Reade. “She has a different sense of justice. I don’t think she is an anti-Semite, I just think she’s a bad judge. And she’s now trying to vindicate her earlier bad judgments by imposing such a harsh sentence.”

Several Rubashkin critics who had focused on the immigration charges and allegations of illegal child labor had complicated feelings about the trial’s outcome — a heavy sentence for committing bank fraud and not punishment for the alleged abuse of workers.

“Of course I would have wanted him to be convicted on the immigration and child labor charges,” said Jane Ramsey, executive director of the Chicago-based Jewish Council on Urban Affairs. “But I am not sad about this conviction, since the light wouldn’t have shined on those frauds if the light wasn’t already shining on him for those other issues.”

Shmarya Rosenberg, who runs the website Failed Messiah, has kept up a constant stream of criticism of the Rubashkin family over the past few years. He was quick to tick off what he saw as Rubashkin’s crimes, and thought that Rubashkin himself bore significant blame for his steep sentence through his courtroom behavior. But Rosenberg also found himself in the strange position of having sympathy for a man who has been a popular villain on his website.

“Twenty-seven years is way too much,” Rosenberg said. “Especially in a system where there are no conjugal visits and you really don’t get to see your kids very much except for brief visits in a room with a lot of other people around. It’s just that the system is structured in such a way that it takes people who don’t fit the normal profile and it hurts them more than is necessary.”

Rosenberg put the blame for the long sentence on the federal guidelines, which he thought needed to be reformed.

Rather than feeling vindicated, the sentencing left him feeling uneasy.

“I had an initial feeling that finally he’s being punished for what he’s done,” Rosenberg said. “But that was followed immediately by me saying, why the hell is he getting 27 years?”