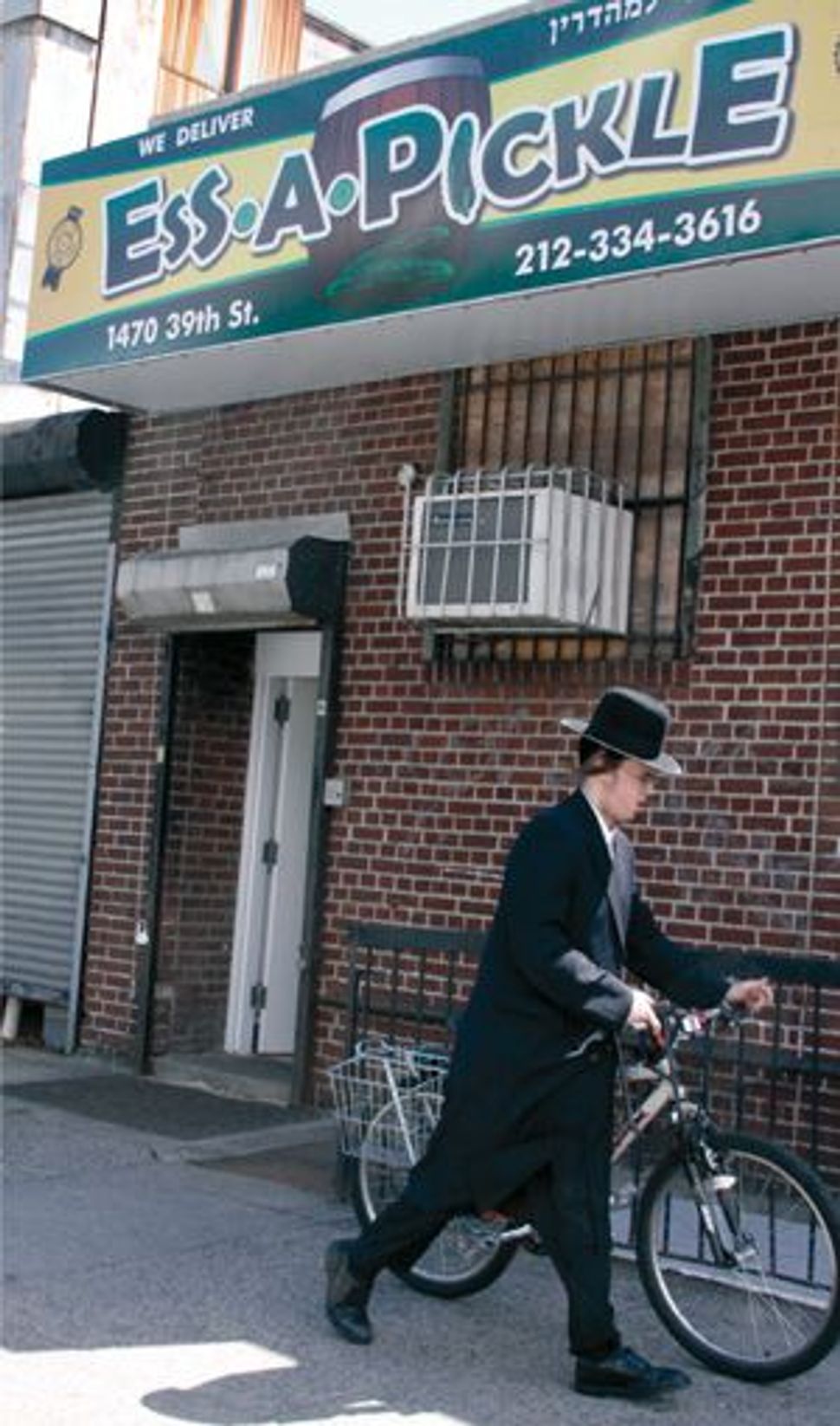 Eat A Pickle: The new Boro Park store has the plastic barrels, but not the same historic setting as Guss? Pickles on the LES. Image by SHULAMIT SEIDLER-FELLER

Two hours before closing time on a Friday afternoon, three members of a Hasidic family walked into Pat Fairhurst’s pickle shop in a heavily Orthodox Jewish section of Boro Park, tempted by the sweet and sour pickles nesting in brine in big plastic barrels. 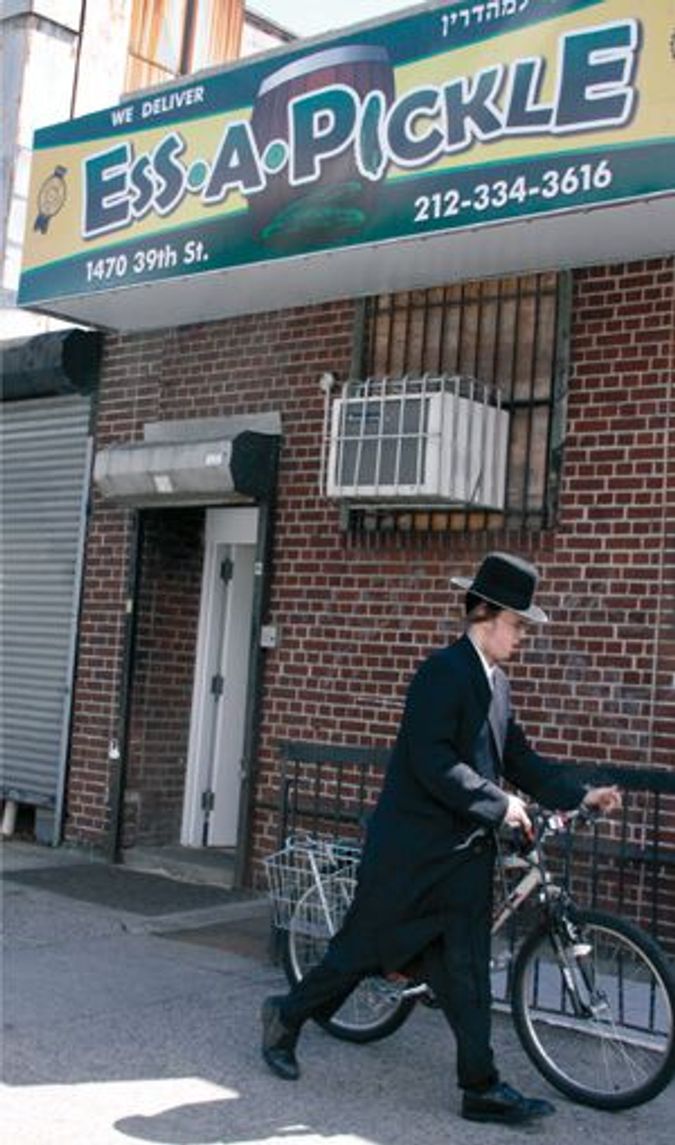 Eat A Pickle: The new Boro Park store has the plastic barrels, but not the same historic setting as Guss? Pickles on the LES. Image by SHULAMIT SEIDLER-FELLER

The father looked around at the spare but functional store, smiled, and inquired about the shop’s kosher certification.

The store, Ess-A-Pickle — Yiddish for “eat a pickle” — opened in March. It is the latest incarnation of Guss’ Pickles, the Lower East Side culinary institution that spent almost a century as a monument to immigrant New York City. The shop, with its trademark pickle barrels lining the sidewalk, closed in late 2009.

No longer a block away from the Lower East Side Tenement Museum, Fairhurst’s new store is bounded by a kosher caterer on one side and a clothing store housed under a “Rubinstein’s Heimishe Bakery” awning on the other.

For Fairhurst, a Catholic who grew up in Brooklyn’s Boro Park, Ess-A-Pickle is a homecoming of sorts. And for the neighborhood’s residents, it’s the kind of store that fits right into Boro Park’s urban shtetl aesthetic.

“They’re so happy we’re here,” Fairhurst said. “There isn’t a store like this in the neighborhood.”

Moving to Boro Park has meant fewer tourists on a sentimental journey and more questions like, “Did you get the certification yet?”

Ess-A-Pickle is OU-certified, but Fairhust is waiting for a rabbi to finish investigating the dozens of spices she uses before she can obtain the stricter Central Rabbinical Congress (CRC) hekhsher, or certification, that the Orthodox family was looking for. Fairhurst said the process is 99% complete.

(For the record, Fairhurst’s store is closed on Saturdays and shuts down at 4 p.m. on Fridays out of respect for the Sabbath.)

The move to Boro Park has meant that the storytelling requests from visitors hoping to capture a glimpse of a long-vanished Jewish-American experience have given way to more practical questions from Orthodox Jews.

But Fairhurst said she doesn’t miss the tourists.

“Tourists — that’s two pickles for a dollar. Half the time they didn’t buy anything,” she said. “They just wanted you to tell a story. You’ve got to do a little dance for nothing.”

Across the East River, Fairhurst’s departure from the Lower East Side is yet another piece of the neighborhood’s metamorphosis from rows of tenements to trendy restaurants and stores.

“All along Orchard Street, everybody’s suffering down there. There used to be bargains; now, the rents are so high that people can’t give much discount,” Fairhurst said. “I’m not looking for cheaper. I’m looking for customers.”

For Dave Favoloro, the tenement museum’s director of curatorial affairs, the pickle store’s move underscores the larger phenomena of Lower East Side gentrification and the neighborhood’s colonization by new immigrant groups — and the seeming contradictions that sometimes exist between those two.

“Because of [Guss’ Pickles] visibility and its stature, of course it’s something that reminds of what is sort of an ongoing dynamic,” Favoloro said. “It’s one that makes you revisit what’s going on.”

The block of Orchard Street that Guss’ Pickles occupied has changed dramatically during Favoloro’s six and a half years at the museum, with “the old sort of ladies’ undergarment shops” giving way to ethnic restaurants and hip coffeehouses such as 88 Orchard and Roasting Plant.

Just a few blocks over, near Allen Street, Chinese-run wholesale meat and produce retailers operate stores “in what used to be the spaces that housed the businesses of earlier generations of immigrants,” Favoloro said.

The Lower East Side has just one pickle shop now, and even that store — the Pickle Guys, on Essex Street — gets a boost from a second location in Brooklyn, which has been open for about 18 months.

“The only way we’re going to generate more money is to open more outlets,” said Alan Kaufman, the store’s owner. “You do have to move with the product, with the younger generation.”

And as for Ess-A-Pickle, Fairhurst said the new name has a nice ring to it.

“Years ago, the men would chant outside. They’d say to their kids, ‘Ess a pickle!’ ” she said. “On the Lower East Side, it was all like that. … That’s in the past. It happens with every neighborhood. People move away. They’re not coming back. They’re gone.”