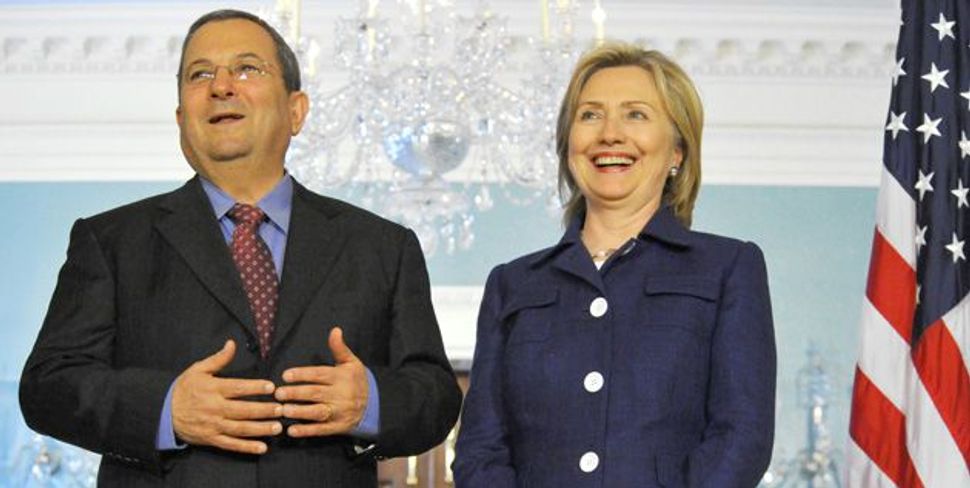 On June 8, Israeli Foreign Minister Avigdor Lieberman made a trip to the United States. He met leaders of the Jewish community, attended the opening ceremony of a community center in New York, briefed Israeli diplomats and returned to Jerusalem without making a stop in Washington. During his two-day trip, Lieberman did not meet any American administration officials.

Two weeks later, Ehud Barak, Israel’s defense minister, made the same journey, but his schedule was quite different. Barak’s calendar was packed with official meetings at the White House, the State Department and the Pentagon, and on Capitol Hill.

The two proximate visits demonstrated what many in Washington and in Jerusalem have known for a while — that in the current state of affairs, Ehud Barak is not only Israel’s defense minister, but also its de facto foreign minister, at least when it comes to ties with the United States, Israel’s most important ally. Lieberman, though holding the title, is not a player on the field of America-Israel relations.

“It is unprecedented to have the defense minister have such broad responsibilities,” said Yoram Peri, director of the Joseph and Alma Gildenhorn Institute for Israel Studies at the University of Maryland. Peri noted that it is not unusual to see the prime minister bypass his foreign minister on issues relating to ties with the United States, but “we had never seen in the past the minister of defense take over this sensitive issue.”

Barak’s ascent to the spot of Israel’s top point man for relations with the United States reflects the constraints under which Benjamin Netanyahu’s government operates. While maintaining a hard-line approach designed to uphold his right-wing coalition at home, Netanyahu is interested in

broadcasting a more moderate image when engaging with the United States, an image best presented by Barak, leader of the Labor Party and a veteran of the Israeli-Palestinian peace process.

“This is a relationship based on mutual dependence,” commented Peri, describing Netanyahu and Barak’s relationship. “Barak fills a very important function for Netanyahu, and in return he gets more leeway than any defense minister in the past.”

Briefing a group of reporters at the end of his latest trip to the United States, June 24, Barak seemed at ease with his unofficial role as Israel’s top diplomat. The lengthy list of officials he met with did not stop with his defense department counterparts. They included Vice President Joe Biden, United Nations Secretary-General Ban Ki-Moon, Secretary of State Hillary Rodham Clinton, Defense Secretary Robert Gates, National Security Adviser James Jones and Joint Chiefs of Staff Chairman Michael Mullen.

Similarly, the span of issues that Barak raised during his press briefing ranged freely from the state of America-Israel relations to the future of peace negotiations with the Palestinians, issues way beyond his portfolio as defense minister.

Washington, in turn, showed its affection for the Israeli defense minister.

“It is a pleasure to welcome back an old friend,” Clinton said when she greeted Barak at the beginning of their June 23 meeting at the State Department. At the Pentagon, Barak was welcomed with an honor cordon. On his previous visit to Washington, in April, Barak was meeting with James Jones, the national security adviser, when the door swung open and President Obama dropped in for an hour-long conversation.

“He knows these people for many years, and he believes in maintaining intimate ties with the Americans,” a close aide to Barak said. “That is the reason they prefer to talk with him.” Barak’s acquaintance with top American officials dates back to his tenure as prime minister, between 1999 and 2001, and to other senior Cabinet-level positions he held during the tenure of President Clinton.

Washington’s warm embrace of Israel’s defense minister stands in stark contrast to the public display of chill that came out of the White House during Netanyahu’s last two visits, which were both scheduled in the evening, without photo-ops or press availabilities. Then, there is the almost nonexistent contact that administration officials have had with Lieberman, Israel’s actual foreign minister.

But it is not just U.S. difficulties with these two officials that puts Barak in his current role. According to David Makovsky, director

of the project on the Middle East peace process at the Washington Institute for Near East Policy, the Obama administration is actively attracted to work with Barak in particular, because he is seen as someone who “understands that time is not on Israel’s side” when it comes to negotiations with the Palestinians. While Lieberman on June 29 again completely rejected the goal of a negotiated agreement on a Palestinian state by 2012, as urged by the United States, the European Union, Russia and the United Nations, Barak has begun speaking out in recent months about the clock ticking against Israel.

“If we do not move forward on this front, we face increasing international isolation,” Barak said during his recent visit to Washington. “We need our own assertive initiative.”

Elliott Abrams, who served as deputy national security adviser to President George W. Bush, argued that the current America-Israel communication gap is not something that can be addressed by having one point man in charge — especially not Barak, who is not a member of Netanyahu’s Likud party. “After all, Barak has his own interests and his own party,” Abrams, now a scholar at the Council of Foreign Relations, told the Forward. “The critical thing is the Prime Minister’s Office, far more important than the Foreign or Defense Ministries. That is what is missing today.”

Ironically, as Barak’s star rises in the United States, his popularity in Israel, and even in his own Labor Party, is waning. A recent poll, published in the Israeli daily Haaretz, found that 48% of Israelis disapprove of Barak as defense minister, while only 42% view him favorably.

Criticism of Barak is also on the rise in his own Labor Party, the retired military man’s political home since he entered politics in 1995. His willingness to continue serving in Netanyahu’s government despite the lack of progress on the Palestinian issue has taken a toll on Barak’s standing among his comrades—of late, even on the party’s hawkish wing.

Binyamin Ben Eliezer, Israel’s minister of industry, trade and labor and leader of the Labor hawks, said in a June 19 town hall meeting in Bat-Yam, “I have nothing to do in this government if it does not enter peace talks. I want to see the peace process revived within a few weeks.”

Decision time is expected to arrive in late September, when a 10-month moratorium on settlement expansion expires. Barak is expected to echo calls from the administration to extend the freeze, whereas Netanyahu has thus far refused to do so. Failure to reach an agreement on the settlement issue could break up this unlikely friendship.