Predicting the Future Is All in a Day’s Work 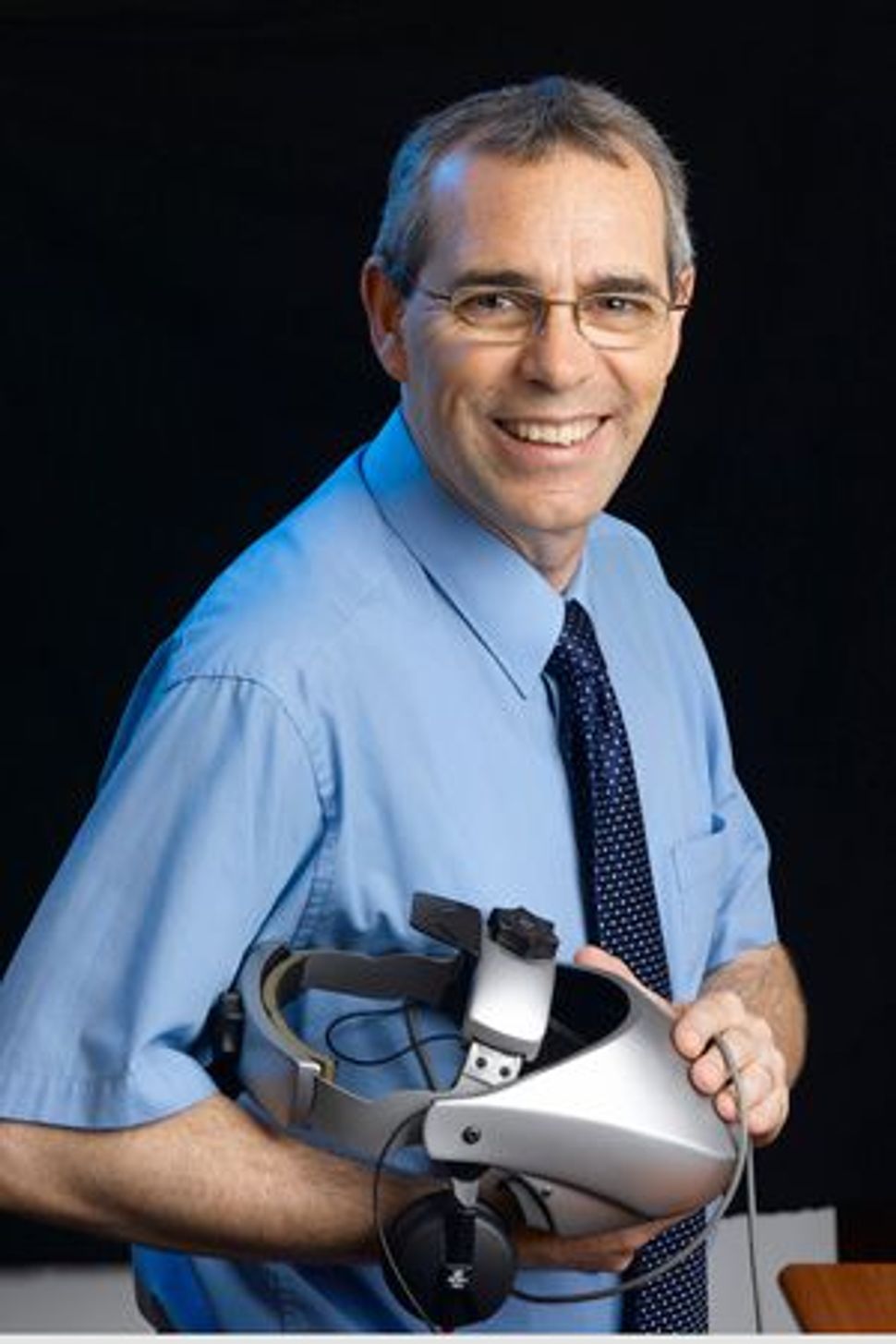 Unpredictable: David Passig (holding a virtual reality helmet used in his labo- ratory) is one of a handful of futurists in Israel. Image by MIKI KOReN

Noticeably mild-mannered and unassuming, David Passig sits down at his kitchen table, pours a glass of apple juice and states matter-of-factly that he will now predict the future: a second term for Obama. Another decade of recession. Two global confrontations (one with America and Turkey facing Russia, around 2020, and another between America and Turkey, around 2050). 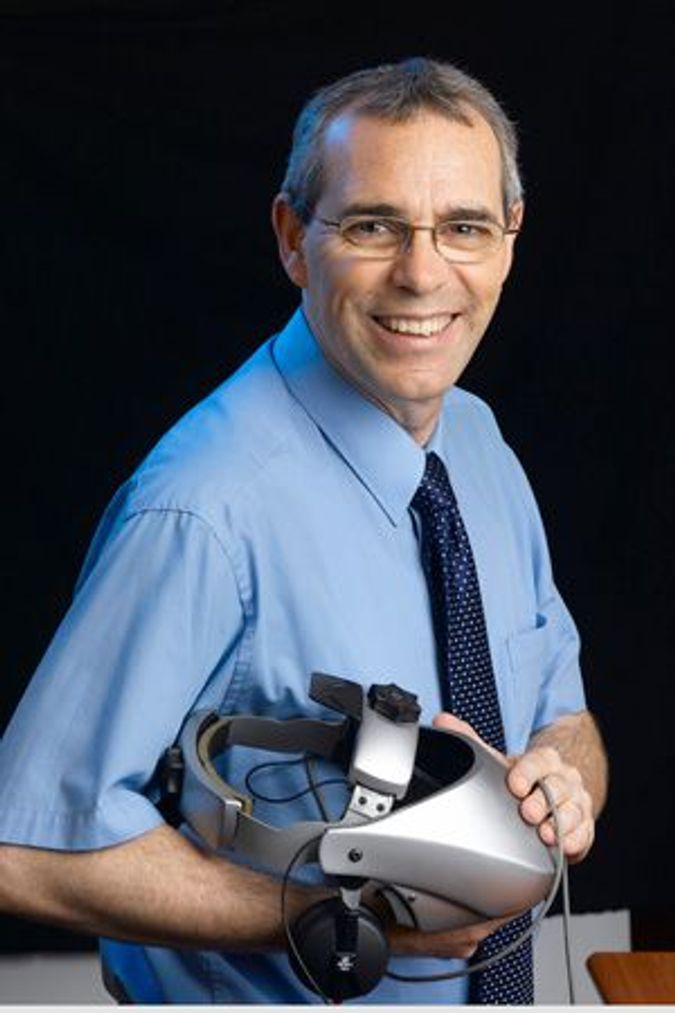 Unpredictable: David Passig (holding a virtual reality helmet used in his labo- ratory) is one of a handful of futurists in Israel. Image by MIKI KOReN

For Passig, a father of four, this is all in a day’s work. Back in 1998, he started predicting in radio and TV interviews that 2007 or 2008 would see a global economic crash. During the early 1990s, he published papers predicting a major development in wireless technology and a terrorist attack against “a symbol of the world order” in the early 21st century.

Passig is no astrologer or self-declared prophet, and he shudders when asked if there is any similarity between him and the 16th-century French forecaster Nostradamus. Passig’s predictions are based on strict scientific analysis, not hunches. He consults for the Israeli government, the Israeli Foreign Ministry and various American Fortune 500 corporations that are seeking to understand their consumers and the impact of various technologies. He cannot name many of his American clients because of confidentiality agreements.

Passig is a professor at Bar-Ilan University’s Graduate School of Education in Ramat Gan, where he teaches future methodologies and heads the Virtual Reality Laboratories. His doctoral degree in future studies from the University of Minnesota hangs in a place of pride in his study.

Future studies is an interdisciplinary field that involves forecasting trends and patterns across virtually every area of human existence and pulling them together to predict the future. Passig focuses on technological, social and educational futures, and he is one of a handful of such practitioners in Israel.

“At the beginning, people had a hard time perceiving that such a field is an academic field. Nowadays, it is much easier for me,” he said, “even though there are still people who cannot accept that there are ways to study trends.”

But Passig’s predictions are consumed by thousands of Israelis: His 2008 book, “The Future Code,” (Yediot Press), remained on the Israeli best-seller list for 25 weeks. His just-released book, “2048” (Yediot Press) is expected to prove equally popular.

Passig began our interview with a statement that he proudly states runs “contrary to common knowledge”: Islamic fundamentalism will fail to shape the 21st century. He claims a 50% reliability rate for this prediction and for others concerning international relations in the next half-century.

He predicts that the first conflict during that time will involve America joining with Turkey to prevent Russia from seeking to regain power in Eastern Europe. Then, in the mid-21st century, he said, Turkey, buoyed by success against Russia, will “start stretching their geopolitical power in the Middle East,” and Egypt, Lebanon and Syria will essentially become satellites of Turkey. Ultimately, he said, Turkey will succeed in bringing peace to the region.

Passig’s book “2048” also predicts that fertility rates will drop in the next half-century and that the world will enter an epoch he calls “the demographic winter,” during which the global population will drop to 5 billion or 6 billion. He foresees a time when humans will produce energy in space and beam it through microwaves to the Earth’s surface.

Passig noted that he insists on releasing his books in Hebrew because he feels a responsibility to alert Israelis about trends for the future.

“My aim is not to later say — ‘I told you so,’” he said, “but rather to allow people to change many of the trends.”

Passig, 52, was born in Morocco, spent his early childhood in France and then immigrated to Israel with his family when he was 11. He fought in the Second Lebanon War, and then, at the request of family members who thought he needed a break, he took a vacation in France. “I was walking along the street and saw an exhibition called ‘The House of the Future,’” he recalled. “I entered and fell in love with the field of futurism. It was fascinating.”

An Orthodox Jew, Passig was surprised when asked if future studies and Judaism conflict. They “fit like a hand in a glove,” he replied. “It’s Judaism that brought the idea [in the Mishnah] that ‘everything is foreseen, but free will is given.’ There is logic to how history is moving; however within that great thing that is occurring which is life, we have free will.”

As for divine intervention, Passig admitted that certain events he is holding out for, such as the coming of the Messiah, would undo his predictions, yet “I cannot as an academic bring those things in.” For the most part, he said, “I believe that the divine is in the system. It’s like in Judaism we point out that ha-teva [nature] and Elohiim [God] have the same gematria [numeric value]. Within nature, God is residing.”

Predicting the Future Is All in a Day’s Work