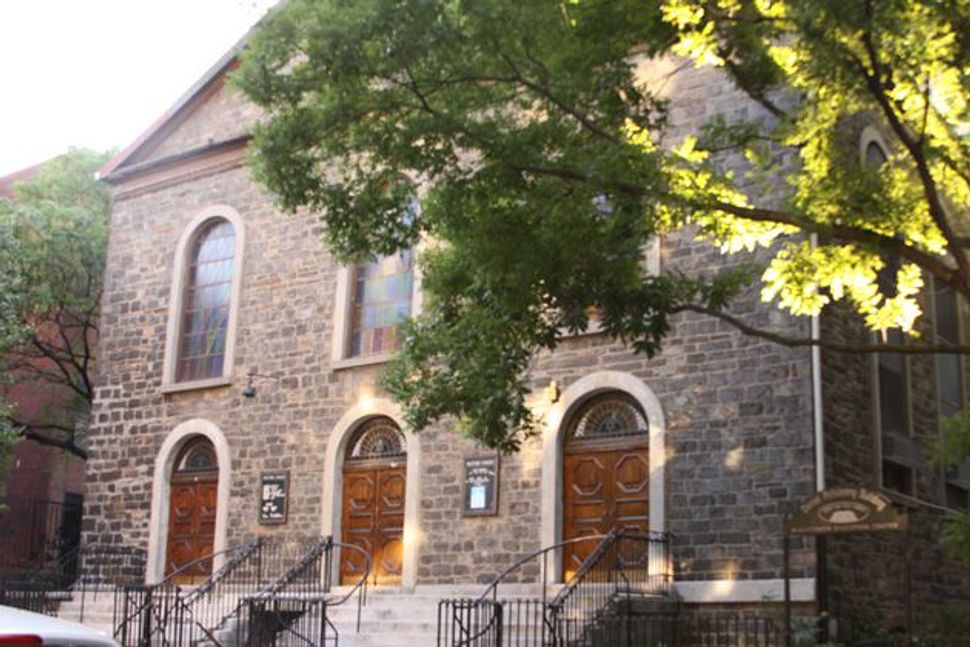 Tradition: The 145-year-old synagogue is on Manhattan?s Lower East Side. Image by SHULAMIT SEIDLER-FELLER

The historic Bialystoker Synagogue, on Manhattan’s Lower East Side, looked set to launch a new era this past June: For the first time, the Orthodox congregation was prepared to allow a woman to run for a position on its board.

But the synagogue members’ vote to do so has been overturned by the congregation’s rabbi, reportedly upon the intervention of Rabbi Dovid Feinstein, son of the famed late rabbinic authority, Moshe Feinstein. The father, in his day one of the most revered Torah legal authorities in ultra-Orthodox Judaism, was a longtime resident of the storied neighborhood in which Jewish immigrants once teemed, and in which his family retains deep roots and continuing influence.

The communal spat, which took place this past spring, pitted the congregation’s Modern Orthodox contingent against its more traditional elements, laying bare an ideological schism at the 145-year-old synagogue.

“This was definitely a win, sort of, for the more yeshivish,” one synagogue member said, using a term that refers to the non-Hasidic ultra-Orthodox. That synagogue member asked that his name not be used, citing the small size of the community. “I think the rabbi was concerned with that element leaving,” he said.

The congregation’s rabbi, Zvi David Romm, a graduate of the Yeshiva University’s Modern Orthodox rabbinical seminary, did not respond to repeated requests for comment.

The Bialystoker Synagogue is one of the few Orthodox synagogues remaining in what was once a center of American Jewish life. Located in a landmarked former church on Willett Street, it is now thought to be the largest Jewish congregation on the Lower East Side.

Other Lower East Side synagogues with Modern Orthodox members, including the left-leaning Stanton Street Shul and the right-leaning Young Israel Synagogue of Manhattan, currently have women serving on their boards. Modern Orthodox synagogues in general usually allow women to run for board positions, although some bar them from serving as officers.

But the Bialystoker Synagogue straddles a rift in the Orthodox community, with a membership that includes both Modern Orthodox and more traditional families. In the broader Jewish world, those two segments of the Orthodox population are as identified by philosophical differences as they are by institutional affiliations. Whereas Modern Orthodox are often connected to Manhattan’s Yeshiva University, the more traditional populations affiliate with so-called “black hat” yeshivas in Brooklyn and in Lakewood, N.J. There, as in Israel, gender segregation is taking on increasing importance among traditionalists. Major philosophical differences also exist over the groups’ respective openness to secular studies, and to using secular academic disciplines as a means to understand Torah.

Traditionalist objections to women serving on synagogue boards stem from a mixture of Halacha, or religious law, and tradition. According to halachic authorities, the barring of women from positions of lay leadership is often based on an interpretation by the 12th-century Jewish scholar Moses Maimonides of a biblical verse in the Book of Deuteronomy. In the Mishneh Torah, his extensive work cataloging Jewish religious law, Maimonides cites a passage in which the Israelites are told to appoint a king. He infers from this that, because they are not told to choose a queen, women are banned from positions of communal authority.

The dispute at Bialystoker began about a year and a half ago, when Romm told the congregation that he had no halachic objection to a woman serving on his synagogue’s board, though he maintained they could not hold a few specific positions, including board president and gabai, or treasurer. At the time, board elections had not been held for a number of years, due to a desire to maintain continuity in the midst of ongoing legal and business negotiations.

When new elections were finally set for this June, at least one woman announced her intention to run. Reached by phone, the woman, Janet Riesel, declined to comment.

At an April 20 meeting, the outgoing board deadlocked over whether to accept Romm’s halachic interpretation as synagogue policy. A board vote on the issue split exactly down the middle. A general membership referendum was consequently held on the issue May 16. Members could cast their votes between 7 a.m. and 5 p.m. on that day, and could also submit votes by mail.

In the final tally, those supporting the allowance of women on the ballot won by a margin of 57% to 43%.

“Obviously there was one side that won, but it wasn’t a clear mandate,” one member said. “This was an issue that clearly divides the neighborhood.”

Two weeks later, Romm addressed the synagogue following Saturday morning services, saying that the results of the vote would be disregarded and that women would not be allowed to run for the board.

Exactly what happened between the vote and Romm’s May 30 pronouncement is unclear. But according to synagogue members and outside observers, Dovid Feinstein intervened against adoption of the new policy. A prominent figure in his own right, Feinstein is also a halachic authority for Orthodox Jews in the United States, and continues to reside in the same neighborhood in which Moshe Feinstein was rosh yeshiva, or senior religious authority, of Mesivtha Tifereth Jerusalem, a famed Lower East Side yeshiva.

A spokesman for Feinstein said that the rabbi does not speak with the press.

The Feinstein family retains a strong presence on the Lower East Side. Mesivtha Tifereth Jerusalem is currently led by Dovid Feinstein and is just blocks away from the Bialystoker Synagogue. Rabbi Reuven Feinstein, another of Moshe Feinstein’s sons, attends the synagogue regularly.

Rabbi Moshe Tendler, a rosh yeshiva at Yeshiva University’s rabbinical school, said that he disagreed with Dovid Feinstein’s objection to women serving on the synagogue board, but that he understood the instinct.

“In light of the really amoral society in which we live, where boy-girl relationships really have now deteriorated to a point in which the sexual morality is just nonexistent… the mood of the Orthodox community has been to take a more extreme view of men and women interacting socially,” said Tendler, himself a son-in-law and student of Moshe Feinstein. A female board member being actively involved in synagogue affairs “is being looked upon as a social interaction,” he explained.

One Modern Orthodox synagogue member, who said that his family had voted to allow women to serve on the board, didn’t see the overturning of the vote as a loss for the Modern Orthodox elements within the congregation. He asked that his name be withheld because he is a member of the synagogue.

“Ironically I think that the shul is still very much more Modern Orthodox than yeshivish,” he said. “Among the yeshivish people I’ve spoken to, I don’t know that they saw this as a victory. They were more dejected and aggravated.”

A new, all-male board was voted in June 13. The newly elected president, Judge Shlomo Hagler, did not respond to a request for comment.