For Ayalon, Israel Has Moved Peace Process Forward; Palestinians Have Not 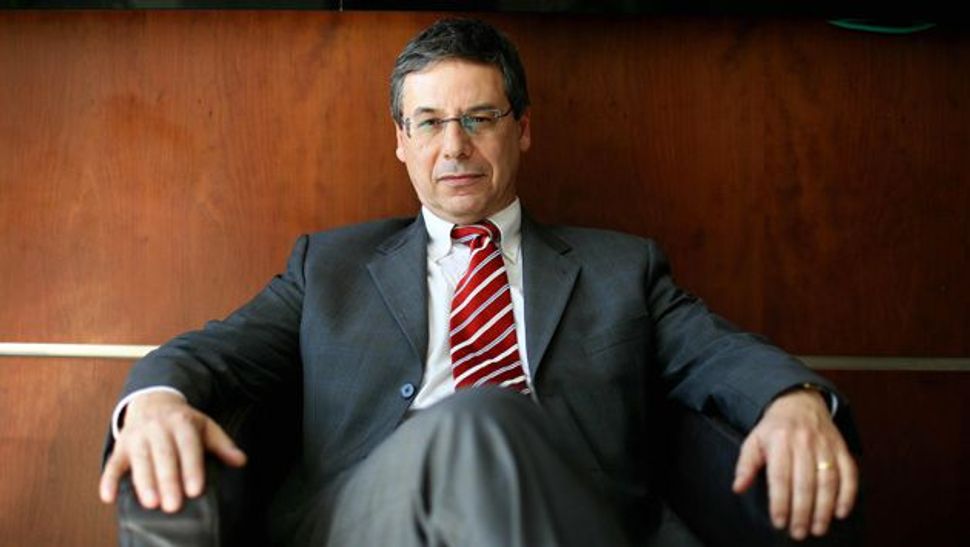 Daniel Ayalon, Israel’s deputy foreign minister, said his country’s position regarding the peace process has evolved markedly over the past 17 years, and rejected remarks that Israel was interested only in dictating terms to the Palestinians.

Ayalon, Israel’s ambassador to Washington from 2002 to 2006, and second in command at the Foreign Ministry since the current government formed last spring, took exception to comments that the chief Palestinian negotiator made in an interview published July 2 in the Forward. The Palestine Liberation Organization’s Saeb Erekat claimed that with the current Israeli government, there is “dictation, not negotiation,” which is why the peace process is not progressing.

“I would ask Mr. Erekat, or any objective observer, and I would say that the litmus test is very simple,” Ayalon said during an interview at the Foreign Ministry in Jerusalem. “Judge the two positions, the Israeli position and the Palestinian position, as they are now vis-à-vis where they started in ’93, when the process started. You see the Israeli position has evolved in leaps and bounds all the way to accepting a Palestinian solution now… a Palestinian state.

Ayalon, who represents the Yisrael Beiteinu party, listed other steps Israel has taken that, in his opinion, prove the Jewish state is serious about peace: withdrawal in 2005 from Gaza and four West Bank settlements; “far reaching” offers by two prime ministers, Ehud Barak in 2000 and Ehud Olmert in 2008; help in building up the Palestinian Authority, and, in recent months, [taking] “security risks by opening most of the [West Bank] checkpoints and roadblocks so there is free access and movement.”

But “take this and compare it to the Palestinian evolution and there is none; the same position the Palestinians had in 1993 is the same here. For them, it’s maximalist views, all or nothing, which means 100% of the territories, dismantling all of the Jewish communities — Judenrein, yes — [in] Jerusalem, I’m talking about the Temple Mount as exclusively under Palestinian sovereignty… [and] refugees’ ability to go to Israel.”

This demand by the PLO that at least some refugees settle in Israel is in his view the “main problem.” He said: “The Palestinian’s position as it is now does not talk about two-state solution but about one-and-a-half state for the Palestinians [and] half for the Jews with the possibility or the potential of two Palestinian states.”

Ayalon is angry about the claim made by Erekat and many international observers that Israel is placing preconditions on negotiations.

A year ago, when Benjamin Netanyahu said he favored a two-state solution, he laid down expectations that the Palestinian entity would be demilitarized and forgo control of its airspace, and that Jerusalem would stay united under Israeli control. But Ayalon said that Netanyahu’s comments should not be seen as preconditions, but rather as starting positions for talks. “Our position is our position. They are entitled to their position,” he said. “Let’s meet not halfway, let’s meet 80% their way. We are ready to do it, or 90% even, and they are not even ready for that.”

Ayalon argued strongly against the perception that his party, which is often described as far right, will prove an impediment to a two-state solution. Rather, he claimed that Yisrael Beiteinu contributes an idea that will make it workable: “exchange of populated territories.”

The party wants Arab areas close to the Green Line, such as the city of Umm al-Fahm, to be incorporated into a future Palestinian state in order to strengthen the Jewish majority in Israel post-two-state-solution. This proposal has been the subject of intense interest since June 23, when Avigdor Lieberman, party leader and foreign minister, outlined how it would work in his “blueprint for a resolution,” which he published in The Jerusalem Post.

Ayalon said that Lieberman’s proposal had been proved by history. “Looking at the world today, benefiting from the experience we have today, we understand that the role of a national state which is as homogenous as possible has been far more successful than dual nationality or multiethnic states.

“We see today after everything else has been tried in history that the nation states actually are being split [into] the very original groups.” He cited the breakup of the Soviet Union into 15 republics, the division of Yugoslavia into five republics, and the splitting of Czechoslovakia into the Czech Republic and Slovakia.

A peace settlement for Israel and the Palestinians should be based on “natural foundations, and for that we would like to have a two-state solution whereby a future Palestinian state will be mostly Arab and where Israel will be mostly Jewish,” he said.

Ayalon stressed that under his party’s proposal, people would not have to leave their homes. He rejected suggestions that the idea is morally or legally dubious, quoting the United Nations General Assembly Resolution 55/153, written in 2001, which states: “When part of the territory of a state is transferred by that state to another state, the successor state shall attribute its nationality to the persons concerned who have their habitual residence in the transferred territory and the predecessor state shall withdraw its nationality from such persons.”

If Palestinian negotiators reject the proposal, that could indicate that they want a strong Arab demographic inside Israel because they are holding out for control of Israel as well as the West Bank, he said. “If there is a knee-jerk reaction [from] the Palestinians — ‘No, we don’t want it’— then we begin to suspect why won’t they want it.”

For Ayalon, Israel Has Moved Peace Process Forward; Palestinians Have Not