If only Marxist revolutionary Leon Trotsky could see what has become of his great-grandson, David Axelrod.

The 49-year-old Russian émigré to Israel has adorned his modest living room with a singular-framed photograph: a bird’s-eye view of Jerusalem with the Dome of the Rock — Islam’s third-holiest shrine — digitally replaced with an image of an imagined Third Jewish Temple.

He named his 10-year-old son, Baruch Meir, after two of Israel’s most notorious Jewish figures: Baruch Goldstein, who gunned down 29 Muslims at prayers in Hebron in 1994, and Rabbi Meir Kahane, whose ultra-nationalist political party was outlawed by Israel some years prior.

And he has served three terms in jail, he said, on counts of attacking Arabs and setting fire to a mosque, charges that he denies.

“Let’s put it this way: Every time I was arrested, I didn’t do it. Whenever I violated a law, nothing happened and nobody arrested me. I did things, but they never got close to me,” Axelrod said with a grin, sitting on the porch swing outside his house in this small hilltop settlement of about 150 families, adjusting his large skullcap and chewing on the ends of his beard.

In a case of mistaken identity 20 years ago, Israeli police mistook Axelrod for yet another David Axelrod, from the same settlement, who was a suspect in the killing of two Palestinians the morning after Kahane was assassinated in Manhattan.

But it would be hard to confuse the Moscow-born Axelrod with his great-grandfather Leon Trotsky, the bespectacled, frazzle-haired intellectual and a leader of the Russian Revolution, who rejected nationalism and renounced his Jewish identity.

“Zionism is incapable of resolving the Jewish question,” Trotsky told Jewish reporters when he arrived in Mexico, where he fled the Soviet state but was later axed to death by order of his arch-nemesis, Stalin.

Sometimes in history ideologues beget ideologues, and sometimes history takes an ironic twist. Trotsky is just one of a number of political activists in the early 20th century who led bold movements to create new societies, but whose descendants today advocate ideologies that would make their predecessors turn over in their graves.

The latest scion to rock the boat is 36-year-old Avinadav Begin, the grandson of Menachem Begin, who was born in the Russian Empire, a younger contemporary of Trotsky, but led an entirely different movement. He is also the son of Likud Knesset member Benny Begin, a faithful devotee of Menachem’s dream of a Greater Israel that would include the West Bank. Menachem Begin headed the militant Irgun faction in the run-up to Israel’s War of Independence, and served as Israel’s sixth prime minister.

“Judaism is violence, Zionism is violence…. A flag is violence, an anthem is violence,” Avinadav Begin writes in his first book, “The End of Conflict,” a meditation-cum-treatise in Hebrew and Arabic which argues that clinging to nationalistic identity is at the root of worldwide violence.

Israel is used to family rebels. While American politicians’ progeny often stay out of the limelight, their Israeli equivalents tend to be more vocal — and ideologically rebellious. Former right-of-center prime minister Ehud Olmert’s daughter, Dana, has participated in demonstrations for Palestinian and gay and lesbian rights. Avraham Burg, son of Yosef Burg, longtime government minister from a hawkish religious party, made waves with his 2008 book, “The Holocaust Is Over,” in which argued that Israeli society has become violent and isolationist. One-time Irgun fighter and former defense minister Moshe Arens has a son who is a professor at the University of Southern California, Yigal Arens, an outspoken critic of Zionism and Israeli policies toward Palestinians.

Benny Begin declined to comment on his son’s book.

Avinadav Begin grew up in Jerusalem on the same street as his grandfather, Menachem, and walked to his house for Friday night meals. He served in the army and studied fine arts at the prestigious Bezalel Academy.

“I was a typical Israeli” from the center of the political spectrum, Begin said. But then a few months spent working as a dog walker in New York gave him some distance from Israel, and he began to re-examine his beliefs.

In the past four-and-a-half years, he’s frequently attended demonstrations against the separation barrier, near the Palestinian village of Bil’in. His essays about visits to Bil’in and meditations on power and violence form the basis of his book.

Begin says he doesn’t remember the reactions of his family members when they began discussing his newly formed opinions after his return from New York. But he says that family get-togethers are lively, with many different political views expressed. Even among his four sisters, “there are a few different opinions,” though “none of them think like I think,” he said. (Begin’s brother, an F-16 pilot, was killed in training in 2000.)

Avinadav Begin takes pains to distance himself from his famous father and grandfather; his author biography includes no mention of them. But, like a deft politician, he is careful to smooth over their ideological differences.

“Part of the book we agree upon, and part of it we don’t agree upon,” Begin said diplomatically about his father’s opinions of his book.

On the other side of the political spectrum — and the Green Line — Axelrod makes no effort to pay tribute to his great-grandfather.

“Trotsky — he wasn’t really smart,” Axelrod said with a shrug. He called his relation to Trotsky a gimmick and said that Trotsky cared only about his career and didn’t really practice what he preached. For Axelrod, who has dedicated his life to the settlement enterprise, living what you believe matters.

Axelrod was born in Moscow in 1961 to Yulia Akselrod, a mother whose family paid a heavy price for Trotsky’s revolutionary activities. Stalin not only had Trotsky assassinated in 1940; he methodically sought out Trotsky’s children and pursued his other first-degree relatives, fearful that anyone left alive might potentially challenge his rule. Yulia’s father, Sergei Lvovich Sedov — Trotsky’s second son — was killed, and her mother served a 10-year term in a labor camp in Kolyma, east of Siberia, followed by 10 years of forced exile. Her maternal grandparents in exile in Siberia raised Yulia. 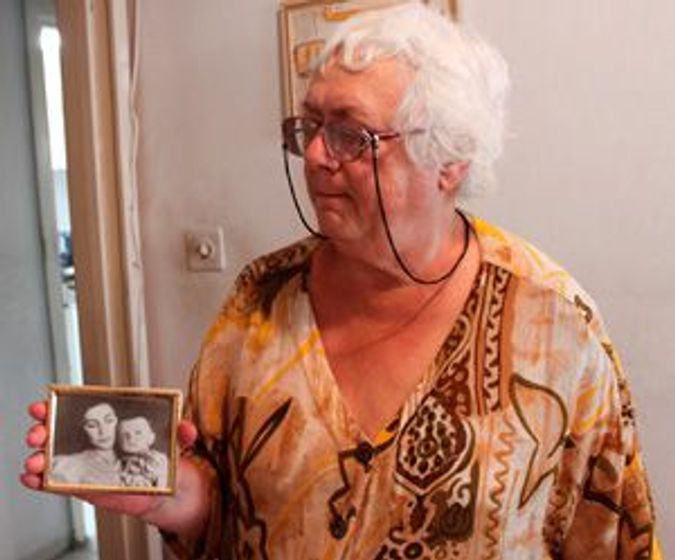 Family Pedigree: Yulia Akselrod, Trotsky?s granddaughter, who lives in Israel, holds up a photo of herself as a child with her mother. Image by DANIEL ESTRIN

Growing up, Yulia hid the Trotsky connection from her son until shortly before they immigrated to New York, in 1979. He found out he was Jewish only when boys at school found out and beat him up because of it. En route to the United States, Axelrod participated in a youth trip to Israel and came back enamored. When the family arrived in the Crown Heights section of Brooklyn, Axelrod began to hang out with Chabad Lubavitch Jews, and two years later he found himself in the ultra-nationalist town Kiryat Arba near Hebron, working alongside his role model, Russian émigré and settlement movement activist Ben Zion Tavger. After a stint in an Israeli settlement in Sinai, he eventually moved to Kfar Tapuach, where he resides today with his wife and their six children.

“Me and my son live in completely different worlds. I try not to think about how he lives,” Yulia Akselrod said from her small apartment in downtown Jerusalem, which is filled with cat figurines and dusty-framed portraits of Trotsky, Martin Luther King, Jr. and Eleanor Roosevelt. A self-described “explosive personality,” she left the United States for Israel after 25 years to live near her only son, but refused the official citizenship granted to Jews because she rejects a religious affiliation. 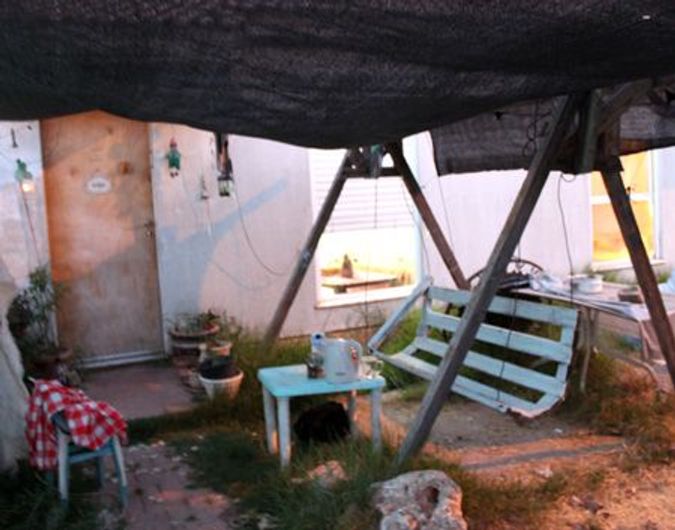 Trotsky?s Legacy: The home of the revolutionary?s great-grandson David Axelrod, who lives in the hard line West Bank settlement of Tapuach Image by DANIEL ESTRIN

Though David Axelrod dissociates himself from his great-grandfather, he is proud to come from a long line of imprisoned relatives. “My children were in jail already,” he boasted; two of his sons were arrested for protesting the dismantling of Jewish settlements in Gaza in 2005. He sets examples for his children in other ways, too: when his son thought he wasn’t capable of university studies, the older Axelrod began studying engineering at the nearby Ariel University Center of Samaria in addition to his day job as a welder. His mother admires her son’s devotion to his children, a trait she is told Trotsky lacked.

And though David Axelrod denies it, he and his great-grandfather share other similarities. Like Trotksy, he is a nonconformist who rejects the ruling authority—he hasn’t voted for the Knesset since Kahane died and broods about what would make a perfect society. “Democracy is screwed up,” Axelrod concluded after participating in a discursive discussion on the topic. “Torah is the king.”

Axelrod’s thoughts, like Trotsky’s, are directed toward economic wrongs, and he has distributed his writings in pamphlets and on the Internet. His mini-manifesto “Wars of the Torah” rails against rabbis who make a financial profit from teaching Torah.

Similarly, Avinadav Begin, despite his efforts at isolating his book from his familial ties, has been praised for his similarity to his grandfather and father. Military general Moshe Dayan’s widow, Ruth, herself politically opposite from her hawkish late husband, told the Israeli daily Haaretz earlier this year that she is “entranced” by Avinadav Begin’s book.

“He is very Begin-y, exactly like his father and grandfather. He believes in something,” Dayan said.