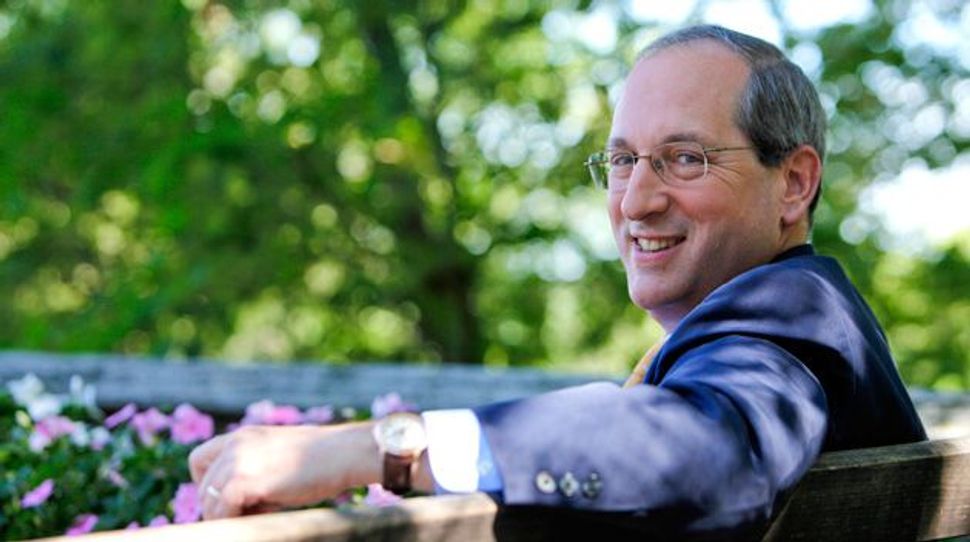 Brandeis University has chosen Frederick M. Lawrence, an expert in civil and human rights laws and author of a book on hate crime, to be its new president.

Lawrence has served as dean of George Washington University’s law school since 2005. For 10 years, he was also one of the five lay members on the Rabbinical Assembly’s Committee of Jewish Law and Standards, which makes rules and issues decision regarding religious law for Judaism’s Conservative movement.

Many in the Brandeis community saw the choice of a legal scholar who has spent his career in the secular world and who also has strong Jewish ties as sending a deliberate message.

“There was a sense in the larger Jewish community and certainly on the campus that there are two types of people, those devoted to liberalism and human rights and those devoted to Israel and Jewish civilization,” said Jonathan Sarna, the Joseph H. & Belle R. Braun Professor of American Jewish History at Brandeis. “And the sense was that you would have a battle between those two perspectives. Brandeis’s leader would be one or the other. But it turns out that they found somebody who has credentials in both.”

In a conversation with the Forward, Lawrence agreed that he was someone who could represent the many different elements that make up the Brandeis community.

“It is an extraordinarily good fit,” Lawrence said about his appointment, announced July 8. “If you look at the various constituencies here, I am someone who is committed to secular excellence, who has roots in the Jewish community, and who is committed to social justice. And I don’t view those things as paradoxical. I don’t view them as pulling in different directions. I view them as the impulses that give rise to my work and to my life. They sometimes take you in different directions, but I think that’s a healthy internal debate.”

Lawrence said he was raised as a part of a Reform congregation in Port Washington, N.Y., on the north shore of Long Island. He belongs to a Conservative congregation in Brookline, Mass. And he is also currently a member at a Modern Orthodox synagogue in Washington, D.C., where Joseph Lieberman is also a congregant. And he has also been involved with the Anti-Defamation League on issues of anti-discrimination law.

Asked about his political position when it comes to Israel, Lawrence said only that he is a “devoted Zionist.” He also avoided a discussion of the tensions that exist as a result of international and human rights law — part of his expertise — that are being vigorously applied to Israel’s military actions.

He succeeds Jehuda Reinharz, Brandeis’s president since 1994, who issued a statement lastSeptember that he intended to resign. A month before, Reinharz also announced that he was joining the Genesis Philanthropy Group’s International Advisory Board.

Lawrence, who received a law degree from Yale, worked in the 1980s as an assistant U.S. attorney for the southern district of New York, where he became chief of the office’s civil rights unit. Before arriving at George Washington, he taught law for many years at Boston University and was awarded the school’s Metcalf Award for Excellence in Teaching, its highest teaching honor. He is the author of “Punishing Hate: Bias Crimes Under American Law,” published in 2002.

During his conversation with the Forward, Lawrence did not go into detail about how he would deal with some of the fiscal issues now facing Brandeis. He did say one of his greatest challenges would be in the fundraising and development area.

As far as the controversy that surrounded the aborted attempt to sell the Rose Gallery, for which Reinharz has been roundly criticized, Lawrence also avoided saying what he thought. Reinharz, he said, has been a personal friend for many years. Lawrence responded in a way that already sounded presidential.

“The most important thing going forward is try to find a good resolution that will try to bring as many people to the table and make as many people as happy as possible,” Lawrence said. “I think we’ll be able to do that, and I think there were lessons learned from how that all played out. But I’m certainly optimistic.”