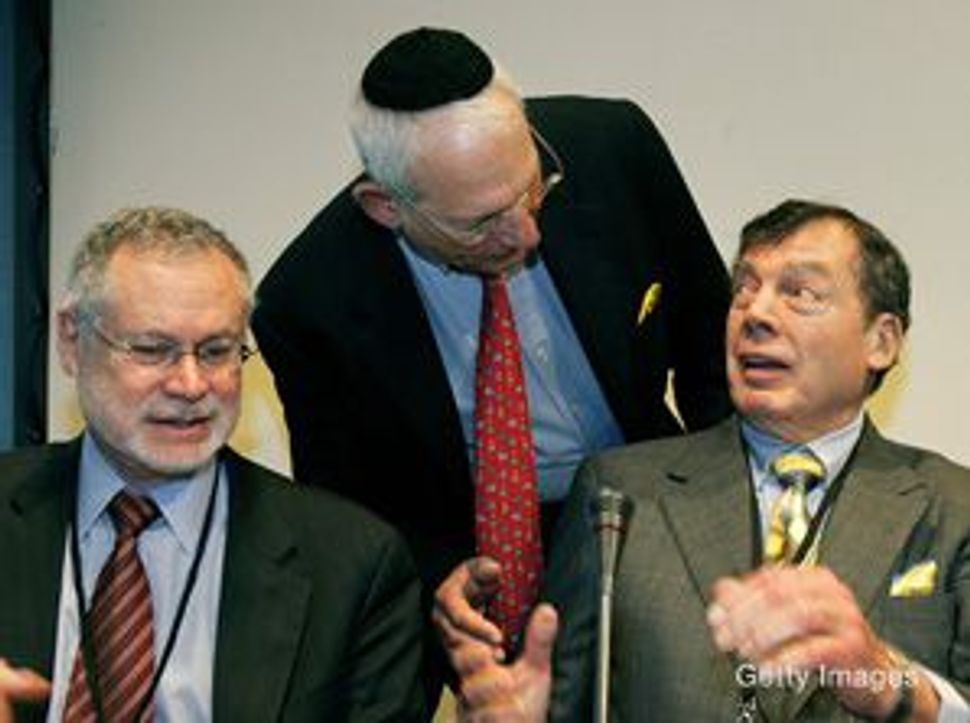 For a few months, the former head of the World Jewish Congress, Israel Singer, quietly served as an adviser to the American Jewish Congress. But when one of Singer’s old enemies found out about it, he made sure the work would not last. 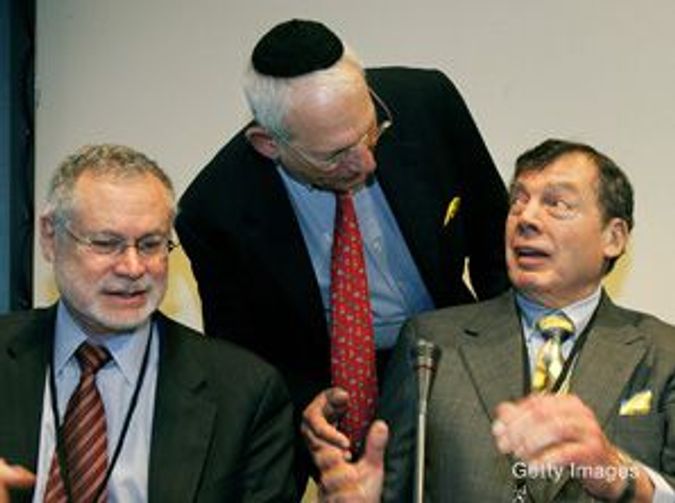 Stephen Herbits, a former WJC secretary general who fiercely defended Singer for years, then turned against him in early 2007, wrote a spirited letter to the AJCongress, throwing a host of accusations against the man who had been responsible for many of the Holocaust restitution agreements of the 1990s.

“It is no surprise to me that Israel Singer’s brief association with the American Jewish Congress was marked by double-talk, obfuscation and controversy,” Herbits wrote to AJCongress President Richard Gordon on January 18, offering to brief the board on the issue.

Singer’s position with the AJCongress was unpaid, but within a few weeks — and after a spate of unrelated internal feuding at the AJCongress — Singer was unceremoniously dropped. At the same time, Isi Leibler, another former WJC official and a longtime Singer foe, has been lobbying several other Jewish organizations with relations to Singer to sever their ties with him.

The decision to drop Singer came about not only because of his prior role at the WJC; the AJCongress had its own internal political battles. But the heated response to Singer’s role demonstrates how the feuding that nearly destroyed the WJC a year ago still goes on, long after the major players have moved on to new arenas. For Singer, a former champion of the Jewish world, it has meant a never-ending stream of public attacks and legal challenges from Herbits and beyond.

“I can’t say what craziness drives these guys to do this,” Singer told the Forward in written comments. “What I can say is that these efforts are and always have been disingenuous, dishonest, and in the pursuit of a political and personal agenda.”

Singer was ousted from the WJC in March 2007 amid accusations of financial misdeeds that began with the discovery of a controversial transfer to Geneva and then London of $1.2 million from a WJC account in New York. An investigation by New York’s then attorney general, Eliot Spitzer, concluded in January 2006 with a report that found no criminal offense but criticized the WJC’s haphazard financial management and ordered that Singer be prohibited from making financial decisions in the organization.

A year later, the combatants have left the scene, but the battles have never died.

Herbits sent a report to both the New York attorney general and the Internal Revenue Service when he left the WJC last September; he took the unusual step of urging the attorney general to reopen the probe into both Singer and the WJC.

“There may be attempts to portray this report as a personal position paper or as a vendetta in the final days of the Secretary General,” Herbits wrote. “However, as with all previous filings to the OAG, this report presents facts.”

Herbits also initiated a lawsuit against Singer, on behalf of the WJC, that was kept alive after Herbits’s departure. On February 26, however, that suit was dropped without prejudice, but it is not clear what legal steps will happen moving forward.

The WJC’s new secretary general, Michael Schneider, said in a statement that the decision to withdraw the lawsuit was taken “because it is very possible that the prior claims do not adequately reflect the full extent of what might be demanded at a future date pending further examination of the facts.”

In addition to Herbits’s legal parries, Singer’s original foe, Leibler, has fought against the remaining positions that Singer has retained, including his leadership posts at the top two Holocaust restitution organizations. In late January, Leibler also urged the Jewish organization in charge of relations with the Vatican to deny Singer any role. Leibler did this in an e-mail to Rabbi David Rosen, chairman of the International Jewish Committee on Interreligious Consultations. Leibler wrote that Singer was attempting to “whitewash” his reputation by attaching himself to Jewish organizations.

“If he had any sense, he would have quietly disappeared and concentrated on enjoying his grandchildren,” Leibler wrote. “Alas, the dybbuk clings to him.”

Rosen had written to Leibler earlier, defending his organization’s handling of Singer, and said that he had “no desire to kick someone especially when he is down.”

Singer’s supporters say that he is the victim of a political and personal vendetta, and also that his enemies are circulating allegedly incriminating documents despite the fact that the WJC already conducted a thorough combing of its records during the 18-month-long probe by Spitzer.

As has been the case from the beginning of the WJC wars, the ongoing fights have revolved around the interpretation of financial documents — some newly disclosed, some old.

One of the documents, which was referenced for the first time last September, when Herbits wrote to the attorney general, is a 2002 letter addressed to Singer’s wife from Zvi Barak, an Israeli attorney who has been at the center of the WJC controversy. The letter proposed that Singer’s wife, Evelyne, obtain an ownership share in a duty-free shop in Romania.

In the March 12, 2002, letter, Barak was apparently trying to draw Singer’s wife into a business venture that would obtain a duty-free store at the airport in Bucharest, Romania. According to the letter, Barak was proposing to act as a trustee in the name of Singer’s wife for the 5% share that a corporation called “Palo Alto (2001) Holding Ltd” would obtain in the duty-free business.

“I will transfer any dividend that ‘Palo Alto (2001) Holding Ltd’ will get from the above company to any account you designate,” Barak wrote, according to a copy of the document.

The document is written on the letterhead of Solar International Finance Limited, a company controlled by Barak that was involved in the money transfers that initiated the attorney general’s probe of the WJC. Because of Barak’s refusal to provide information about Solar, the attorney general prohibited the WJC from having any further dealings with the Israeli lawyer.

The letter is signed by Barak but not by Singer’s wife. In the end, the duty-free store was not sold to anyone and the Romanian authorities decided to close it. To Singer opponents, this is proof that he has been less then forthcoming.

“Singer misled me and the WJC in our efforts to investigate, because he never gave a full explanation about those connections to Barak,” Herbits told the Forward.

Singer’s supporters said that though Barak had repeatedly drafted business proposals and submitted them to Singer over the years in an effort to lure him into the private sector, Singer never took that step. The Forward was shown documents suggesting that Barak sent the same document that was sent to Singer’s wife to at least two other people, offering the same business arrangement.

“For the record, of course I don’t own any part of this company — and neither does any member of my family,” Singer wrote to the Forward. [Full disclosure: Israel Singer’s son, Elie Singer, is the founder of The Jewish Channel, which is producing a series of television shows involving Forward staff members.] “This was apparently an offer that was made to a bunch of individuals, with the same type of document,” he wrote.

Barak did not return requests for comments.

In his report last fall to the attorney general, Herbits returned to many of the themes that had been explored by the attorney general’s probe two years earlier, suggesting that many issues were never properly resolved. Herbits used his evidence not only to implicate Singer and the WJC but also to question the conclusions of the attorney general and the “Assurance of Discontinuance” that ended the investigation.

The attorney general’s office did not return repeated inquiries about the status of the probe.