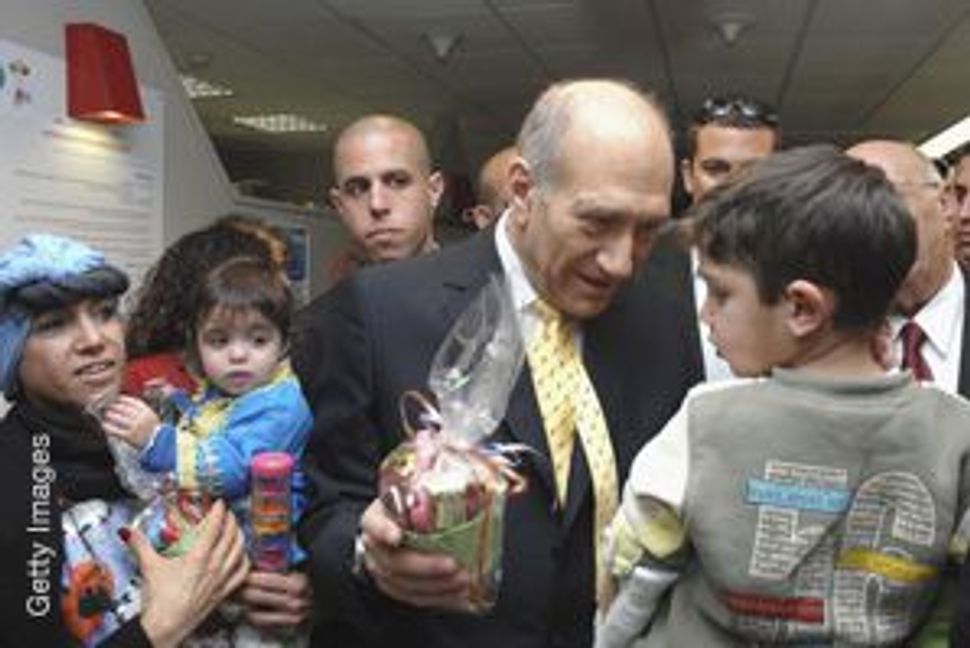 Bundle of Joy: Last Purim, Israeli Prime Minister Ehud Olmert handed out the food parcels known as mishloach manot. A new fee imposed by the Israel Postal Company is making the sending of such parcels from abroad prohibitively expensive.

Haifa, Israel – Every year, in a modern take on a biblical commandment, thousands of Americans mail mishloach manot, festive food parcels, to their nearest and dearest in Israel. 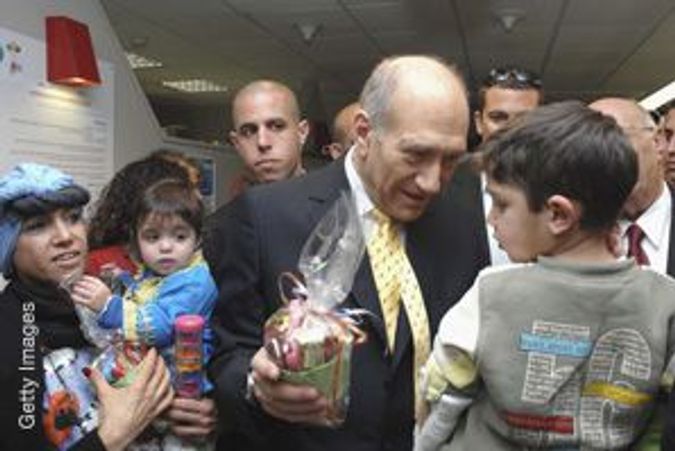 Bundle of Joy: Last Purim, Israeli Prime Minister Ehud Olmert handed out the food parcels known as mishloach manot. A new fee imposed by the Israel Postal Company is making the sending of such parcels from abroad prohibitively expensive.

But while this used to be the best way of helping Israelis toward a happy holiday, we can now reveal a better way: Open up the parcel you have prepared, and eat the contents yourself.

This is because the Israel Postal Company has begun to charge householders for receiving packages from abroad. They must pay at least $10, and costs go up, depending on the size and value of the package.

The fee is a service charge for taking the package through customs — traditionally considered an integral part of processing mail, and undertaken by the IPC as a matter of course and without cost.

But now a business ethos reigns supreme at the IPC, transformed from a government agency to a government-owned company two years ago in preparation for the start of privatization, which is due to begin in May.

“Until now, we would receive the package at Ben-Gurion Airport, take it to the customs desk, where checks were made on its contents, had the duty assessed and laid out the money,” spokeswoman Merav Lapidot said. “We did not receive any payment for our service, but we have computers and staff for this job…. There is no reason we should give this service for free.”

The fee does not include any import duties owed for the item, and applies even to contents that are under the threshold for duty, which is $150.

The IPC has not publicized the change, and the Forward was unable to find notice of the charges on the IPC’s Web site. This means that post offices next week will be full of surprised and angry householders who went to receive their Purim gifts, only to be met by a demand for payment.

Those who have caught wind of the charge are responding with fury. “Getting our parcels into the country through the legal channels is as much part of the postal service as carrying them from the plane to the airport. This is a disgrace,” Michael Brooks of Haifa said.

“It is as absurd as the supermarket charging a fee to check out. I am from England and look forward to getting my favorite British foods in mishloach manot. But I have told my parents not to send anything — it will cost me more than the food is worth to receive it.”

Feelings are particularly strong among participants in youth programs. At Kibbutz Ma’agan Michael on the Carmel coast, south of Haifa, some 100 individuals ranging in age from 18 to 25 who two months ago left behind families in a dozen different countries combine studying Hebrew with kibbutz work. Every day, they check their mailboxes with eager anticipation for parcels from home.

“It has been really important for me since I arrived to get packages,” said New Yorker Lana Raykin, 21. Limited to the kibbutz dining room for meals, she craves American tastes. “Some foods like Reese’s Peanut Butter Puffs, as well as some cosmetics, just aren’t available here. Now I’ll have to wait until a family friend comes to Israel to get anything.”

Shelly Morer, who moved to Jerusalem from Rochester, N.Y., has used an Internet chat room to call on Israelis from English-speaking countries to protest. She is urging them to bombard the IPC with e-mail protests.

“I would hope that by objecting, the postal authority and government would come to realize that the new fees being imposed are totally unreasonable and a particular hardship to olim [immigrants], most of whom have many family members abroad,” she told the Forward. “I would also hope that until these new fees are rescinded, people would use other services for sending packages whenever feasible.”

For academics like Menachem Fisch, a professor at Tel Aviv University, ordering books from America and Great Britain is a vital way of keeping up to date with the latest English-language research. “I order many books from Amazon, and I much oppose the fee,” he said. “If processing customs charges merits compensation, compensation should be sought from the customs authority, not from the recipient.”

Many English speakers do not have the language skills to navigate Israeli auction sites, and some believe things to be cheaper abroad, which had led to a growing number of eBay shoppers. “I buy all sorts this way, but it will no longer be worthwhile,” Morer said.

Israel’s trade union federation, the Histadrut, sympathizes with expatriates eager for their food parcels, books and auction-site bargains, but says the new fees are symptomatic of a bigger problem. The labor giant has long opposed privatization of mail services, claiming that essential services that do not make money will fall away. Spokesman Eyal Malma said that this announcement rings alarm bells as the first “proof of what we say.”

“This illustrates that privatization actually pushes prices up, not down,” he said. “The post office should be connected to the state and not the private sector. It is too important for privatization.”