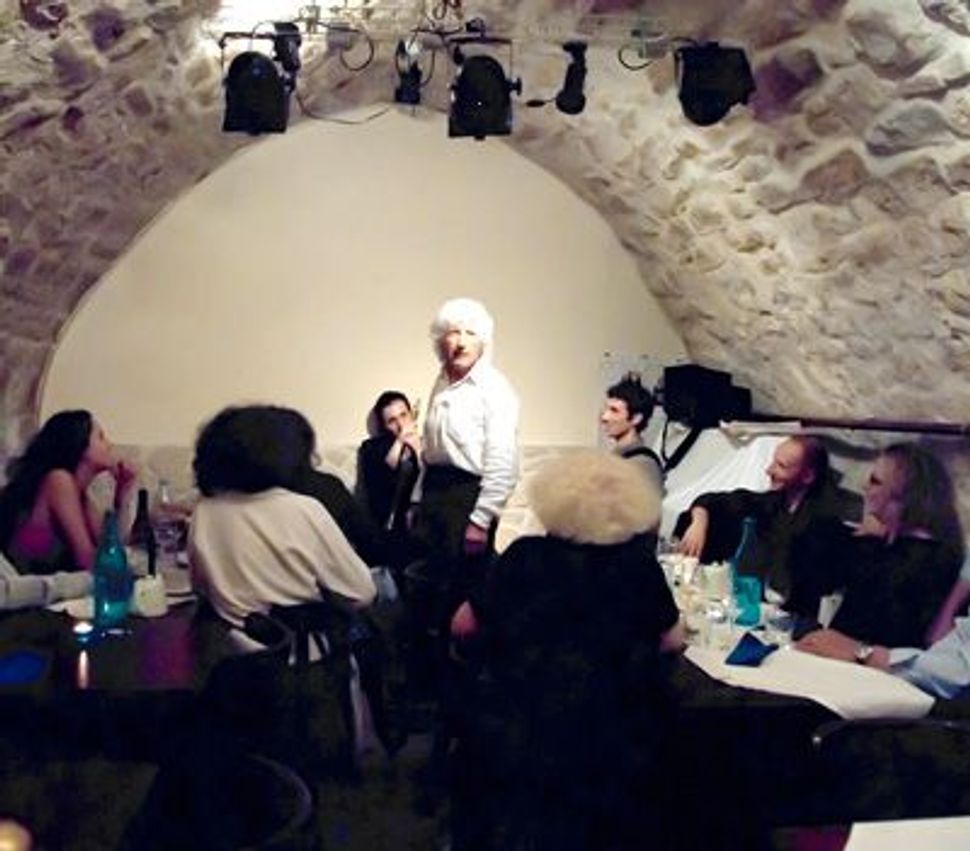 ‘I do a lot of things,” Claude Berger said as he slipped into his restaurant’s kitchen for a glass of red wine. “I’m a writer, I play the flute and I’m a singer. I used to own another Yiddish restaurant before Le Train de Vie. But it closed.” He poured the wine, then paused. “And oh,” he suddenly remembered, “I’m also a dentist.”

These are just some of the things Berger — flutist, polemicist, Yiddish restaurateur and all-around kookster — does during his days. Now a sprightly 74 years old, he’s definitely the most interesting Jew, if not person, in Paris. Maybe in all of France. A strong statement, you say? I ask you: How many dentists do you know who’ve been tangled up in African-liberation movements and have written books calling for the abolition of salaries?

July 5–9 marked the eighth annual Klezmer Paris festival, a series of workshops on Yiddish song and dance. With klezmorim from across the world about to descend on the city, it seemed like an appropriate time to visit a local incubator of Yiddish culture, Le Train de Vie. I was, however, soon to discover that its owner had absolutely nothing to do with Klezmer Paris 2010. 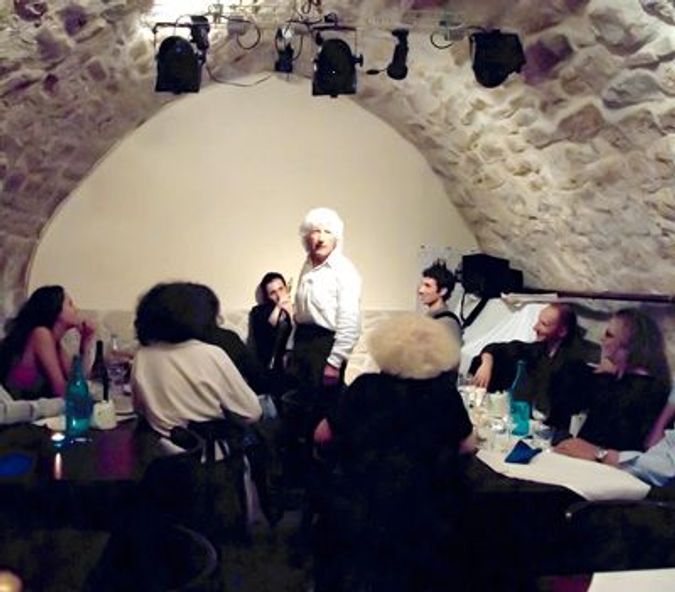 Le Train de Vie is a stereotypically French, sardine-sized restaurant — the kind that Americans enter and think, “Gosh, this place is teeny!” But its petiteness fits Berger like a hand-tailored suit. He is a svelte, elegant man, taken to dressing in black and to flopping back his cloud of cotton-white hair. The menu reads like a feast from a Yiddish folktale: herring, gefilte fish, latkes, cholent, goulash, klops, or meatballs, apple strudel.

At the restaurant, Berger darts about frantically, taking orders, greeting friends, stopping to listen to the concert. He casually slaloms between musicians and tables, and up-and-down the corkscrew stairwell with armfuls of plates and glasses.

Born in 1936 in Le Marais — the Jewish quarter of Paris — Berger did not have an easy life. His mother died early on, and his father, who ran a brothel, abandoned him soon afterward. “I was raised by my grandparents,” he said.

By the age of 6, with the Nazis occupying France, Berger wore the yellow star and hid for two years in a suburban hovel to escape deportation. He witnessed the disappearance of an entire community, which he now says influenced his decision in 2007 to open Le Train de Vie.

“As I was hidden during the war and survived, I couldn’t internalize the death of our culture. So I opened the restaurant,” he told the Forward over the phone, between taking orders for gefilte fish and kreplach. “I named it Le Train de Vie [The Train of Life], contrary to ‘The Train of Death,’ which killed so many.”

After the war, Berger went into dentistry, seeking to escape the poverty of his youth. Later, his job took him to Algeria, where he became entangled in the war of independence. “Though I was a dentist, I wanted revolution and independence,” he recalled. “It was a period when I was an activist.”

Eventually, Berger returned to France, where he continued working as a dental surgeon. At the same time, he started writing down his long-brewing political reflections, and in the 1970s he published a series of essays and books denouncing everything from salaries (“Non-Profits: Towards the Abolition of Salaries”) to racist politicians (“Whitewashing Vichy”). As the titles of his books suggest, Berger’s sense of activism didn’t end in Algeria.

From hardscrabble youth to dentistry to Algerian activist to author, Berger’s next move would be as unpredictable as the rest: In 2000, he opened a restaurant.

“As a survivor, I wanted to create a space that would welcome Ashkenazi musicians to really live their culture,” he said in one of our follow-up telephone conversations. “That’s why I got into restaurants.”

After his first stab at the restaurant business failed in 2003, Berger waited another few years before opening Le Train de Vie. Located in the heart of Le Marais and not far from where Berger grew up, the restaurant is something of an anomaly in a neighborhood overflowing with pasty tourists, gay clubs and ultra-Orthodox Jews.

The night I visited Le Train de Vie, a cabaret unfolded in its downstairs concert hall. The Unternationale, a band comprising Daniel Kahn and Psoy Korolenko played. Korolenko — elephantine and balding, but with long tresses cascading down his chest — pranced about, ranting in Yiddish, Russian, French and English. Kahn, of Daniel Kahn & the Painted Bird fame, sweating in a three-piece suit, accompanied Korolenko on piano. The audience downed seltzers and red wine, and sang along.

After the Unternationale, the regulars — a gaggle of younger violinists, accordionists and clarinetists — rushed the stage and resumed their monthly klezmer jam.

“These days,” Berger said, “there’s a lot of younger klezmer groups. The singers are especially good, and they sing in Yiddish.”

In my experience, the Parisian klezmer scene tilts toward the traditional. Unlike New York or Berlin, not as many dub-Gypsy-tango-punk-thrash-neo-clash-post-post-klezmer outfits stomp around town. Maybe this has something to do with French culture and its almost Puritanical reverence for tradition, what some might consider a natural aversion to change. It is rare to find much deviation from the violin-clarinet-accordion combo.

Later in the evening, I managed to grab a seat at a table with Berger. The regulars, led by violinist and Yiddishist Eleonore Biezunski, churned through a klezmer ditty. I waited for Berger to climb onstage with his flute and join in. But he didn’t. Maybe he wanted to give the younger generation a moment to shine, or maybe there were just too many orders to be taken, but Claude Berger, appearing to finally relax for a second, just sat and tapped his worn hand along with the rhythm.

Sammy Loren is a documentary filmmaker and freelance journalist currently based in Los Angeles. He blogs at http://www.nuevaorleansmovie.wordpress.com. Photos courtesy Cawa Photographie.