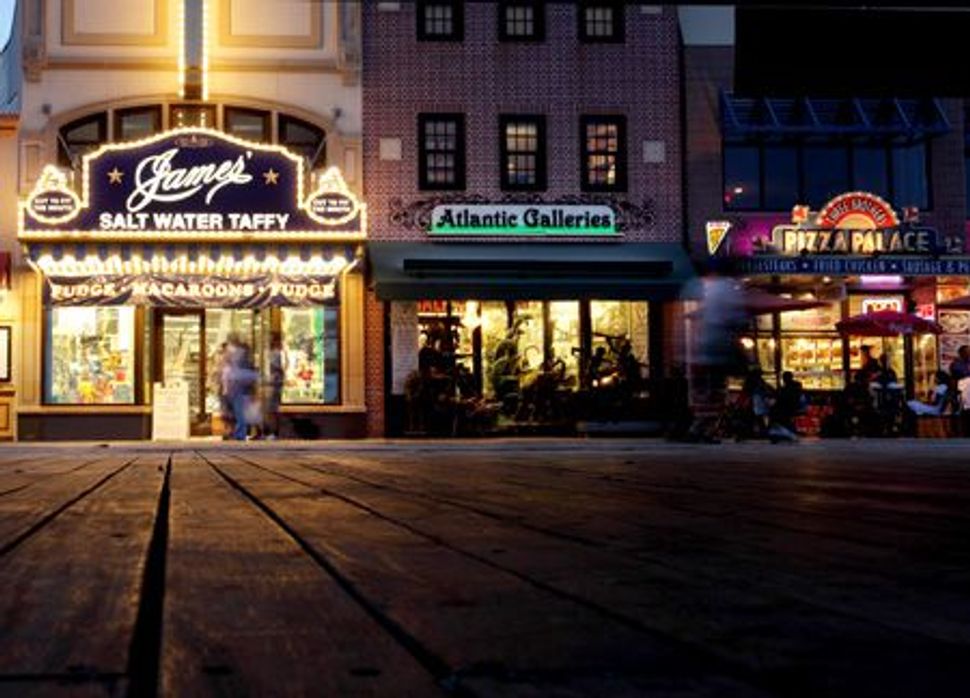 Memorial With a View: A planned Holocaust memorial in Atlantic City will face a row of shops and popular attractions on the city?s famed boardwalk. Image by CLAUDIO PAPAPIETRO 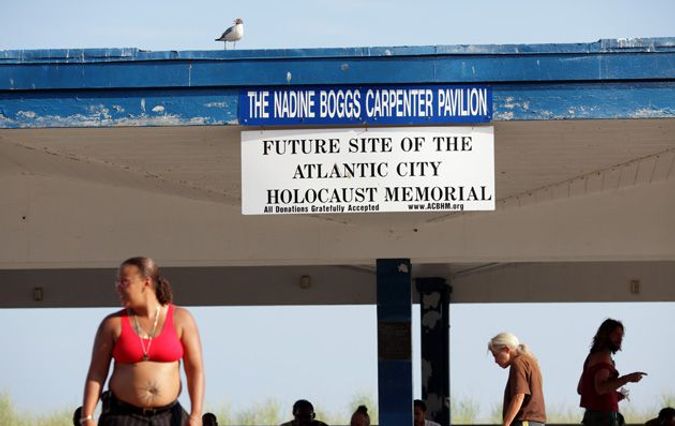 Fun in the Sun?: Bathers walk by site of planned Holocaust memorial in Atlantic City. Image by CLAUDIO PAPAPIETRO

On the ocean side of the famed Atlantic City boardwalk, between New York and Kentucky Avenues, sits a 60-by-40 foot blue and white pavilion.

It is a shaded alcove that serves as a respite for the sun or slots weary, those wishing to drown their sorrows in a rainbow-sprinkled ice cream cone or light up a cigarette or two. To the south, seagulls fly over grass-covered sand dunes. To the north, garish signs advertise Lucky Lou’s Tattoos, Massage Paradise, Three Brothers Pizza Palace and Ripley’s Believe It or Not. A few homeless people loiter nearby.

But the most jarring aspect of the scene may be the plain white banner hanging from the pavilion’s edge, which reads, “Future site of the Atlantic City Holocaust Memorial.”

After being proposed in various forms for 29 years, the idea of a Holocaust memorial in the casino capital of the East Coast is about to come to fruition. In the coming months, the pavilion will be removed from the site to create more vertical space for the memorial. This autumn, a jury of experts in areas such as architecture and Judaic studies will select a winning design from among more than 815 entries submitted by people representing 55 countries. While there is as yet no firm date set for construction to begin, the process of obtaining approvals from various planning and environmental agencies once a design is selected usually takes about a year. 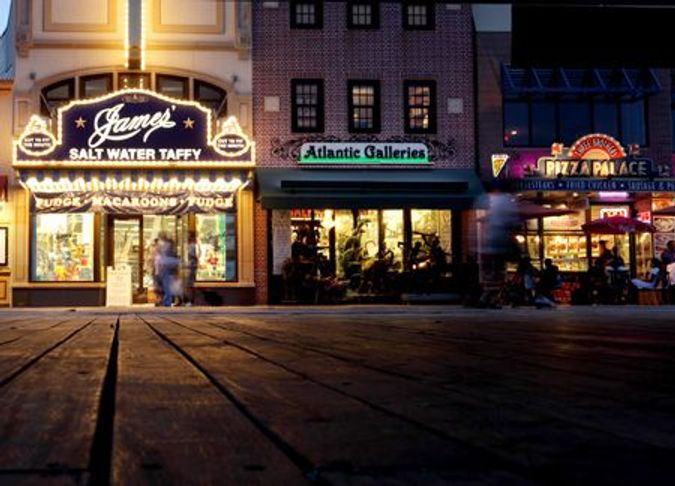 Memorial With a View: A planned Holocaust memorial in Atlantic City will face a row of shops and popular attractions on the city?s famed boardwalk. Image by CLAUDIO PAPAPIETRO

“It’s a perfect location,” enthused former City Council commissioner Ed Colanzi, one of the project’s prime movers. “People will see it, and hopefully they’ll sit down and learn something from it. I don’t happen to be Jewish, but it’s important because that memorial should let people know what’s happened in the past and what should never happen again.”

Others are not so sure. “It really depends on how this is put together,” said Menachem Rosensaft, vice president of the American Gathering of Jewish Holocaust Survivors and Their Descendents. “Obviously in that kind of environment, much greater care is going to have to be taken to make sure the topic is being handled with tremendous sensitivity and respect. The Atlantic City boardwalk isn’t known to attract people who want to engage in particular introspection.”

The proposed Holocaust memorial site was donated to the Atlantic City Boardwalk Holocaust Memorial, the not-for-profit group overseeing the project, by the City Council after a unanimous vote by its nine members in May 2008.

The idea for the memorial originated from a few people who approached Colanzi at a commission meeting in 1981, asking for a Holocaust memorial to be constructed at Garden Pier, an uptown and upscale location distant from the frenzy of the downtown boardwalk. The pier already hosts the Atlantic City Art Center and Atlantic City Historical Museum.

Colanzi rejected the request initially, but later discussed the possibility of other locations in Atlantic City, such as the memorial park across from what was formerly Atlantic City High School.

But in Colanzi’s estimation, the boardwalk is a much worthier locale, based on the large amount of foot traffic —10 million people — that comes through this section of the city each year.

With this foot traffic, of course, also comes the threat of vandalism and other crime that can be prevalent in districts known for gambling, alcohol consumption and nightlife. But Rabbi Gordon Geller of Temple Emeth Shalom in Margate City, N.J., said that the committee is aware of this threat. Geller, who is president of the Atlantic City Boardwalk Holocaust Memorial’s executive committee, said that a fence, security cameras and nighttime lighting will accompany the memorial, in addition to the police presence that is already on the boardwalk.

The planned site of the memorial may be unsettling to those who are concerned with its potential for being abused. But Geller pointed to a site farther down the boardwalk, where, in the shadow of Bally’s hotel and casino, stands the New Jersey Korean Veterans War Memorial. Dedicated in 2000, the memorial is proof that the boardwalk can be host to a wide array of attractions, Geller said.

“The boardwalk is very eclectic. It’s more than cotton candy and balloons,” he said. “The ambiance of our Holocaust memori- al is not such a rare and unusual thing.”

Owners and managers of the nearby boardwalk attractions, who see a potential for increased patronage of their shops, looked forward to their prospective new neighbor.

“There’s a lot of homeless,” said Marisol Colon, manager of Lucky Lou’s Tattoo. “[But] I’ve read in the paper that they’re trying to improve the boardwalk by putting in trees, bushes, lighting and benches. When people are with their children, they can say, ‘Look at this.’ When people are on vacation, it can turn into a history lesson. They would stop and reflect.”

Casino regular Bob Greenberg, 69, of Hillsdale, N.J., scoffed at this. Greenberg has visited Atlantic City on a regular basis since gambling was made legal in the 1970s. After years of experience walking the boardwalk, he predicted that the diverse crowd that frequents the area would not be very receptive to a memorial commemorating those killed in the Holocaust.

“People will walk by and say: ‘Gee whiz, what is that? Oh, them again,’” Greenberg said. “There’s no amount of security that will do anything. There’s never enough security for anything in this world today.”

Memorial organizers, undaunted, are continuing to collect monetary donations from the public to fund the memorial, which has a projected budget of $2 million to $4 million. But Rosensaft cautioned that there are sensitivities unique to Holocaust commemoration that need to be considered.

“A Holocaust memorial is more than just a statue,” he said. “When people go [to Atlantic City], they’re not intellectually or spiritually inclined to think about millions of people being murdered or saying Kaddish, or anything to do with Holocaust commemoration. I just hope my concerns are proven wrong.”