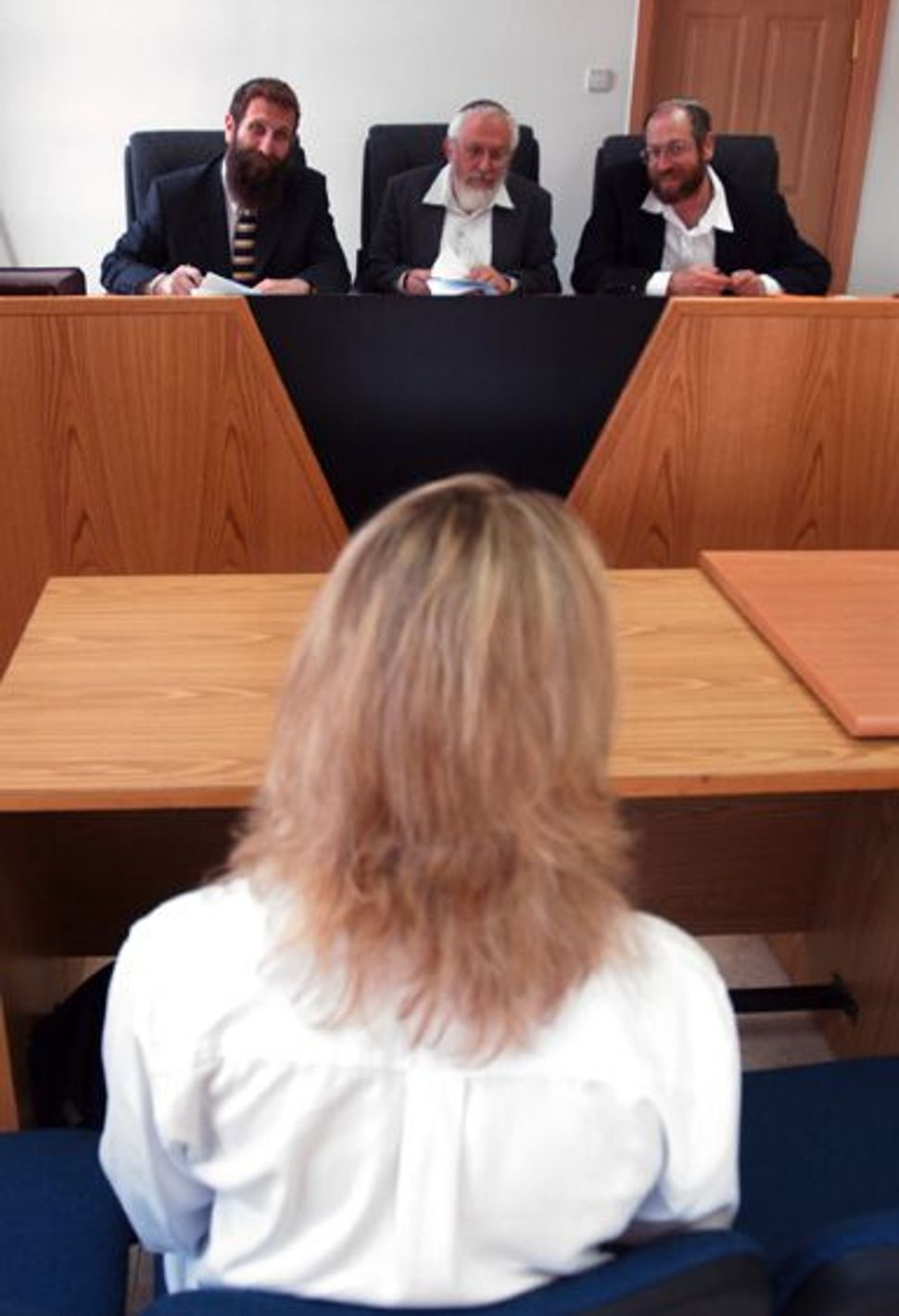 Faithful Moment: A woman faces questions from a rabbinic panel in Jerusalem as part of her conversion process. Image by FLASH 90

Prime Minister Benjamin Netanyahu announced July 18 that he would oppose a controversial bill dictating who could perform conversions in Israel by saying that it would “tear apart the Jewish people.” This particular turn of phrase and the fact that Netanyahu’s opposition has now effectively derailed the progress of the bill mark a clear victory for the forces of Diaspora Jewry, who saw in the legislation an attempt to define Jewish identity in a way that would exclude them. 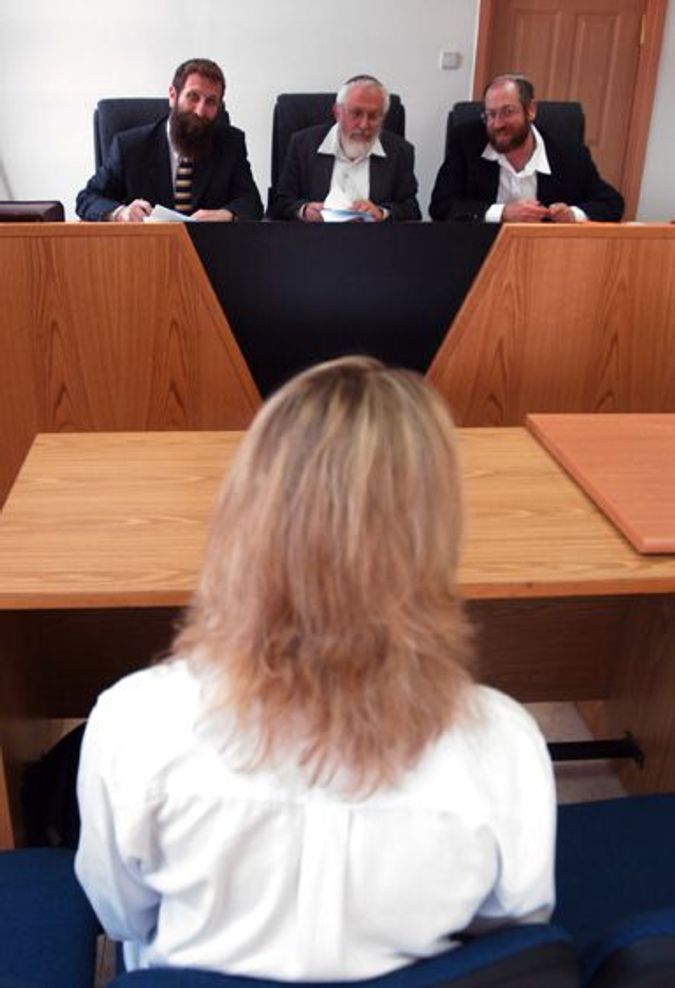 Faithful Moment: A woman faces questions from a rabbinic panel in Jerusalem as part of her conversion process. Image by FLASH 90

From the moment that the Knesset’s Constitution, Law and Justice Committee approved the bill July 12, a broad coalition representing much of North American Jewry took a strong and at times fiercely emotional stand in opposition to its passage. Both the Reform and Conservative movements, along with the Jewish Federations of North America and the Jewish Agency for Israel, led the charge and managed to get a vote on the bill postponed at least until after the current two-month recess, if not indefinitely.

The bill was introduced by David Rotem, a Knesset member from Foreign Minister Avigdor Lieberman’s Yisrael Beiteinu party, and its original intent was to simplify the process of conversion for the roughly 350,000 Russians in Israel who are not considered Jewish, many of whom are Yisrael Beiteinu’s constituents. But as it was debated and rewritten in committee, the bill took on, as one observer put it, “a life of its own.” Rotem’s proposed law would decentralize the conversion process so that city rabbis could perform it. But in order to gain support for this move from two religious parties in the Knesset — Shas and United Torah Judaism — Rotem also had to do something that would seemingly undermine his initial purpose: He would codify, for the first time, the authority of the Chief Rabbinate over all conversions.

For Reform and Conservative Jews, this meant that one kind of Jewish identity — the strict Haredi practice of the current Chief Rabbinate — would take precedent over any other denomination. And even though the bill encompassed conversions only in Israel, they feared that once the rabbinate was given authority over the practice, the earlier Supreme Court precedents that allowed those converted by Reform and Conservative rabbis outside Israel to gain citizenship could be overturned.

“I think it’s an issue of civil rights,” said Steven Wernick, executive vice president and CEO of the United Synagogue of Conservative Judaism. “The Haredim, the Orthodox establishment, whether in the United States or in Israel, they are never going to acknowledge Conservative Judaism. I don’t want them to. I don’t need them to. I do require that the State of Israel, if it’s truly going to be the homeland of the Jews, that it be a homeland for all the Jews.”

“And part of what angered so many people is that you can’t ask me to go to the Hill, to the White House, and be an advocate for Israel against de-legitimization from our enemies and then tell me in the same homeland that I’m advocating for that I don’t matter, and that the Jewish expression that motivates me to fight for Israel as a Jewish issue is not good enough,” he added.

The draft of the bill that was approved in committee also included new language that surprised and shocked many of its opponents. It said that all conversion courts had to follow “acceptance of the burden of the Torah and commandments as required by Jewish law.” According to observers, this would mark the first time that the word Halacha, “Jewish law,” was entered into a piece of legislation, a noticeable departure from the secular identity of Israel’s democracy. It also left power in the hands of the Chief Rabbinate to interpret which practices adhered to Halacha and which did not.

Jerry Silverman, president and CEO of the Jewish Federations of North America, took the unusual step of inserting himself into the debate over the bill. He was in Israel on a visit when the committee vote unexpectedly took place, and he remained so that he could help sway opinion. Silverman was particularly dismayed by the inclusion of the word Halacha into the legislation.

“This word has never been used,” Silverman said. “And so the question becomes one of precedent, and we have to ask where is the government and the state going. We look at the immense amount of investment that is going in to try and tie North American Jewry and Diaspora Jewry to Israel, whether it be young people and Birthright or high school and college programs, and all the work that we’re doing in really supporting the State of Israel within the U.S., within the world. Then there’s this language that frankly has a de-legitimizing effect on the Jews in the Diaspora.”

The deep involvement of Silverman — who worked closely with Natan Sharansky, head of the Jewish Agency — proved decisive. In the week after the committee vote, the Diaspora leaders effectively branded the legislation as one that would undermine Jewish unity. Up against this description of what his bill represented, it was hard for Rotem to make his argument.

Rotem has argued that since the bill deals with conversions in Israel, there is no reason that Diaspora Jews should feel affected by it. And his views have been echoed by some members of the Orthodox community in America. In a recent statement, the Rabbinical Council of America said, “It ill behooves us to intrude on Israel’s democratic processes, or to threaten, even indirectly or by implication, a lessening of our full and unequivocal support for the State of Israel, if our views do not prevail.”

But according to Seth Farber, an Orthodox rabbi who runs ITIM, a not-for-profit that assists people whose conversions are called into question, supporters of the bill failed to understand that the particulars were not as relevant as its potential implications. Farber himself had a nuanced reading of the legislation’s provisions, but when he saw how much it had angered North American Jews, he decided to vocally oppose the bill.

“I changed my tune when I realized the extent to which this issue had become highly emotional for North American Jewry and no longer an issue about the substance of the bill,” Farber said. “As soon as the impression was given that this would de-legitimize, I completely joined the forces of the anti-bill.”

It was the emotional tenor of the opposition that ultimately had the strongest impact. Even normally staid and sober supporters of Israel expressed their dismay in highly personal terms.

David Harris, executive director of the American Jewish Committee, wrote an op-ed for The Jerusalem Post, in which he described his own difficulties proving his Jewishness to an Orthodox rabbi when he tried to get married. “He asked us endless questions about our identity, later insisting on a paper trail a mile long,” he wrote. The experience soured him and clearly affected the way he saw the current debate.

“For those seeking to keep the Jewish people whole and the Israel-Diaspora intact for generations to come,” Harris wrote, “such moves are downright dangerous, with potentially profound implications.”