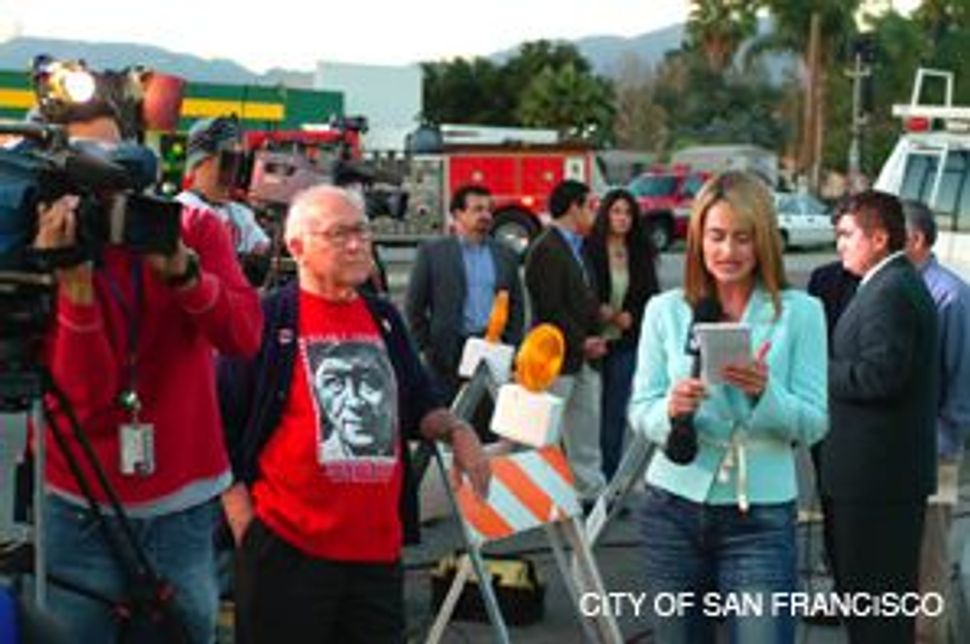 Councilor: Jose Hernadez, here at an event honoring Cesar Chavez has roiled his community with remarks about a Jewish developer.

Los Angeles – Last December, when Sharron Aisenman read in her local newspaper about a lawsuit over a city council member’s alleged antisemitic remarks, it was the first she had heard of anti-Jewish bias in her tiny, overwhelmingly Latino city tucked away in Los Angeles County’s San Fernando Valley. 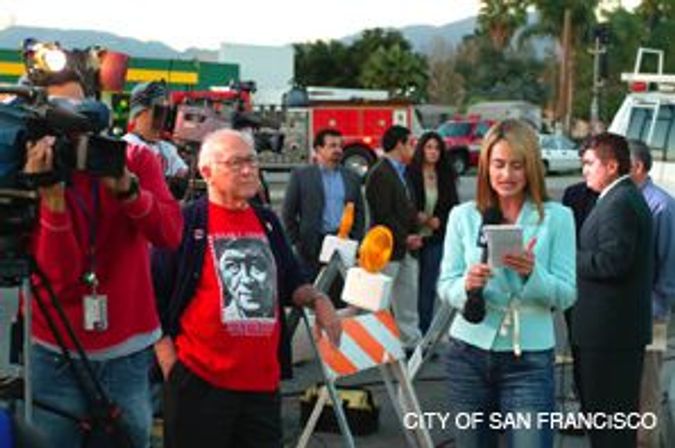 Councilor: Jose Hernadez, here at an event honoring Cesar Chavez has roiled his community with remarks about a Jewish developer.

And, she determined, it would also be the last.

Aisenman, a 65-year-old owner of a women’s romantic apparel company, is part of a coalition of Jews and Latinos seeking to recall José Hernandez, the San Fernando city councilman at the center of the controversy.

Hernandez and the City of San Fernando settled in recent weeks with a local real estate developer for $750,000 in a lawsuit stemming in part from Hernandez’s alleged comments in 2004 that the developer was “…being greedy. He’s Jewish, you know.”

While the incident took place in a town of barely 25,000 residents — about 90% of whom are Latino — it opens a window onto the emerging, sometimes rocky relations between Jews and the West Coast’s burgeoning Latino population. According to a recent study by the Anti-Defamation League, Latinos are disproportionately likely to have antisemitic attitudes. But if the case of San Fernando portends anything for the future of Latino-Jewish relations, it may actually indicate a far more harmonious relationship than the Hernandez episode on its own might seem to imply. In fact, the majority of the concerned citizens seeking to unseat the city councilman are themselves Latino.

“This kind of sentiment has no place in our city, or our country,” said Gilbert Berriozabal, a Mexican-American accountant and San Fernando resident, in an interview with the Forward. “It’s the 21st century, and it’s time to leave that antisemitism behind.”

Berriozabal, 32, isn’t the only Latino outraged by the council member’s alleged remarks about Severyn Aszkenazy, a developer who grew up in San Fernando and has a Mexican-American mother and a Polish Jewish father who survived the Holocaust. In the group of about a dozen citizens who have banded together in recent months under the banner “Concerned Citizens for Good Government,” only two — Aisenman and her husband, 71-year-old Leslie Aisenman — are actually Jewish.

Hernandez did not return a phone call or e-mail seeking comment. In press reports, he has denied making the alleged remark.

The demographics of San Fernando, once a predominantly white city, have shifted drastically in recent decades. The city is now almost entirely Latino, and while a smattering of local Jews remain there, the majority of the Jewish population had left by the 1980s, resettling in other parts of the San Fernando Valley.

Still, at least one local Jewish resident, Mike Majors, 58, remembers when San Fernando even had its own synagogue, the Menorah Temple. That synagogue merged with Ramat Zion in nearby Northridge in 1962, according to Majors. Majors, the owner of a liquor store and check-cashing business, said that his family came to the town in 1925. Through the 1950s, he said, Jewish families owned nearly all of the downtown businesses.

Relations between the two ethnic groups have in part been defined by the fact that Jewish business people have historically employed Latinos as laborers, according to Steven Windmueller, dean of the Hebrew Union College’s Los Angeles campus and an expert on Latino-Jewish relations. Windmueller explained that because of the subservient character of such relationships, jealousy and antagonism might have built up among some Latinos. Still, he added, the reasons for the reportedly high incidence of antisemitism in the Latino community cannot be tied to any one factor.

“You can’t pinpoint any one of these,” he said. “The relationships between Latinos and Jews are still evolving and forming. It’s going to take a while for the two communities to find grounds of communication and cooperation.”

The most recent incident emerged after Hernandez’s alleged comments were reported in a court-ordered deposition taken from Jose Pulido, San Fernando’s city administrator. In March 2005, Hernandez called a special meeting of the city council to consider the case of Aszkenazy’s application for a conditional land-use permit for a development that would include an upscale restaurant with a liquor license. The city’s planning commission had already approved the land-use permit, and Hernandez, with the support of two other city council members, overturned the permit in a 3-2 vote. Aszkenazy is also a publisher of the San Fernando Sun, the city’s local community newspaper.

While investigating the reasons for the permit denial, Aszkenazy was told that Hernandez harbored antisemitic feelings toward him. That led Aszkenazy and his Latina wife, Martha Aszkenazy, to sue the city, along with Hernandez as a named defendant, for violation of their due-process rights. A judge ultimately ruled in 2007 that the city had to reinstate Aszkenazy’s conditional-use permit, and the parties settled for $750,000.

According to opponents of Hernandez, the City of San Fernando, under pressure from Hernandez, spent more than $1.5 million in legal fees before agreeing to settle with Aszkenazy. Opponents say that this is tantamount to fiscal irresponsibility and justifies a recall.

Aszkenazy, 47, said that he is outraged by what he believes occurred. “I’ve never gotten an apology. I’ve gotten a denial, even though the city administrator testified under oath that he said it,” Aszkenazy said. “For someone like Hernandez who claims to be a civil rights advocate, you almost want to question his sincerity for a lot of things.”