From Cowboy Hats to Black Hats 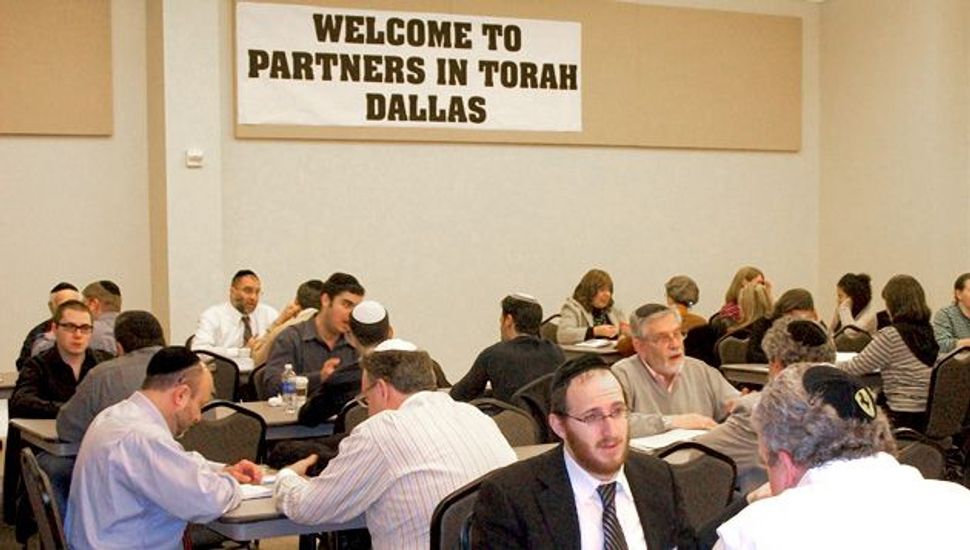 One-on-One Learning: A Torah class at the Dallas center attracts about 50 men and women. Image by DALLAS AREA TORAH ASSOCIATION

Imagine the scene: Four bearded rabbis sit for hours around a table, swaying before their open volumes of the Talmud, debating whether a Jew who owns a gate tower near the entrance to his mansion is required to hang a mezuza on it.

A synagogue in Brooklyn’s Boro Park? Lakewood, N.J.? No, it’s a kollel (Talmudic institute) in Dallas.

In a place where cowboys once roamed and the Reform movement has long held sway, a group of ultra-Orthodox Jewish scholars has gained a foothold over the past two decades and is transforming the local Jewish community.

The catalyst for change has been rabbis affiliated with the Dallas Area Torah Association, which was founded in 1992 and offers an extensive array of adult classes, including Jewish philosophy, Bible, prayer for beginners and Hebrew lessons. Its programs, most of them offered free of charge, have become so popular that they attract thousands of students every year.

Unlike the Chabad Hasidim, who have become a fixture in Jewish outreach in cities around the globe, the DATA rabbis are members of the scholarship-centered, Lithuanian-Yeshiva community (also known as the [Yeshivish or Litvish). This stream of ultra-Orthodox Judaism was founded in the 18th century as a protest against the Hasidic movement for its emphasis on mysticism and personal religious experience.

Although the community’s fervent opposition to the Hasidim has since mellowed, the two groups still retain their own rabbis, schools and communal institutions.

“It’s actually a magnificent story,” said Weinstein, 57. Born and raised in Dallas, he said that when he was growing up, the city was without a kosher restaurant or eruv, an enclosure around a community to allow Orthodox Jews to carry things on the Sabbath. Today, there are six kosher restaurants and two eruvs. Dallas has 10 Orthodox synagogues, three ultra-Orthodox yeshivas and a Modern Orthodox day school. “For us to become a mecca of the observant community is miraculous,” he said.

A kollel is an institute of full-time, advanced study of the Talmud and rabbinic literature. In most ultra-Orthodox circles, it consists of married men, who receive monthly stipends for their learning. But now, a new kind of institution has emerged, called a community kollel, in which the rabbis on staff learn Talmud for part of the day, and also teach Torah to both affiliated and unaffiliated Jews, men as well as women, through one-on-one study and large-scale outreach programs.

Dallas lies in the heart of the Bible Belt, where evangelical Christians are a significant part of the culture. Seeing how seriously their Christian neighbors take their religious beliefs has encouraged some Jews to begin asking questions about their own religious heritage.

Larry Kosowsky, who was raised in a Conservative Jewish home in Wisconsin, told the Forward that his interest in Orthodoxy was sparked when a friend became a born-again Christian and tried to convince him that Jesus was the Messiah. “My wife, Karen, and I just couldn’t combat his arguments,” he said. When DATA was founded, he approached one of its rabbis, Yerachmiel Fried, about the matter. Fried gave him a book to read on the subject, and before long, the Kosowskys were accepting invitations to Sabbath meals with the families of the DATA rabbis.

“Eventually, we kashered our house and started to keep Shabbos,” Kosowsky said.

When Richard Glazer, a native of Fort Worth, lost his father in 1993, he went to a Conservative synagogue, Shearith Israel, to say Kaddish, and realized how little he knew about the prayer service.

“I remember thinking, if I can read Hebrew, how could I be so confused?” Glazer related, with a Texan drawl. “Then someone told me about the classes at DATA, so I started going, took a class about the Jewish calendar and a parsha class (on the weekly Torah portion). I found the place very warm and embracing. Everyone who comes there gets lots of attention.”

At DATA, all the classes are co-ed except for the Talmud class, which is for men only, because Talmud study has historically been regarded as a man’s activity. Many of the class topics change from year to year. On July 26, Rabbi Bentzi Epstein, director of DATA, began a five-week course called Spirituality 101.

Epstein, who also teaches the popular class “Breakneck Through the Bible,” is a native of Monsey, N.Y. He and his wife, Batya, moved to Dallas and are two of the founders of DATA. Today, she is the director of the local mikveh, and they are busy parents of eight children.

Oscar Rosenberg, whose father was a Holocaust survivor, invited the Epsteins and other rabbis to Dallas. The younger Rosenberg had become an Orthodox Jew, as had his two brothers, and felt strongly that a kollel would benefit the Jewish community. “Rosenberg could have provided the initial seed money himself, but chose to involve the entire community in the fundraising, in order to make it a community-supported institution,” Epstein explained.

Today, there are hundreds of donors who help fund the kollel and its activities.

Each year, the kollel organizes a retreat for families at a local hotel. In June it sent a delegation of women to Israel.

Although DATA is now an integral part of the Jewish community in Dallas, it did not become that overnight. “When they first came in, they didn’t know the community dynamics, they didn’t collaborate or consult with the other Jewish institutions here, and just didn’t know how to navigate the politics, so it took years for them to gain acceptance by the mainstream,” Weinstein explained. “Today they are much better at team building, and work together with the other Dallas synagogues and Jewish organizations.”

Weinstein said that DATA’s most valuable contribution has been to provide Dallas Jews with its first adult-centered, communitywide institution. “In the beginning, some people questioned their motives for inviting nonobservant Jews to their classes. They worried that they would try to ‘convert’ Conservative and Reform Jews to the Orthodox lifestyle.

“It took time for them to realize that all boats rise in a high tide. One of the first things DATA teaches its students is the importance of giving, tzedakah. If the rabbis at DATA could get Jews to be more engaged in Jewish life, then everyone benefits.”

Rukhl Schaechter is a writer and editor at the Forverts, where a version of this article first appeared.

From Cowboy Hats to Black Hats