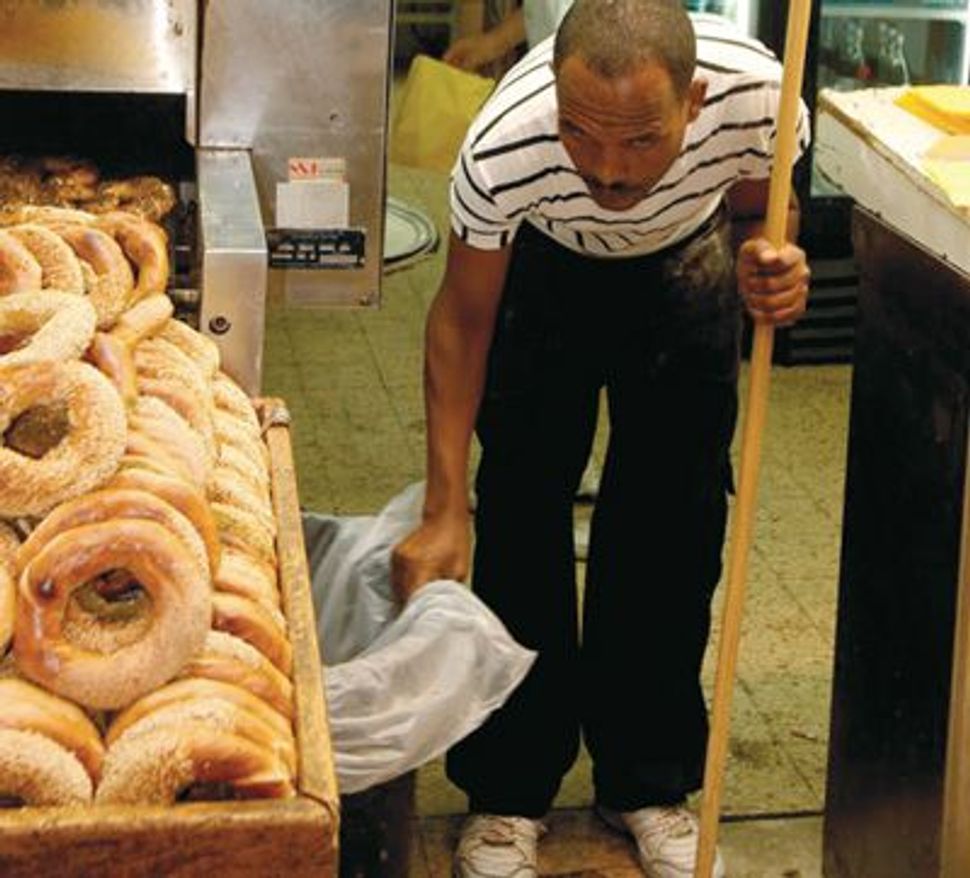 Destination: At Tel Aviv?s Central Bus Station an African worker sweeps up after hours in a pizzeria. 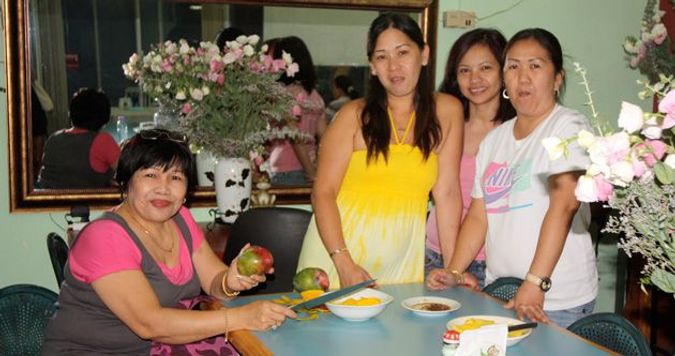 A Place To Meet: Many migrant workers from the Philippines gather at the Tia Maria restaurant at the Tel Aviv Central Bus Station. Image by ROBIN PROLL

The restaurant and dance club Selam has all the hallmarks of an inspiring Israeli success story. Selam is owned and operated by Yaacov, an Eritrean refugee who trekked across the Sinai desert and risked his life to reach the Jewish state. Now in the country three years, Yaacov — who would give only his first name because of his unclear legal status — prefers to speak English, but emphasizes his hope to stay in Israel “Be-ezrat Hashem,” with God’s help.

The Tel Aviv Central Bus Station offers the Promised Land for Yaacov’s dream. Last May, he opened Selam in a recently shuttered Burger King, deep in an underground corner of the sprawling station. Yaacov, who said he left Eritrea to reunite with family who fled to Israel during a war in the late ‘90s, is one of an estimated 19,000 African asylum seekers in the country living in legal limbo. Most are from his native Eritrea and neighboring Sudan. Both countries have generated waves of refugees as a result of wars and repressive governments that practice torture. Selam caters to the many East Africans who gather in the bus station’s endless labyrinthine corridors to work and shop, and even sleep. 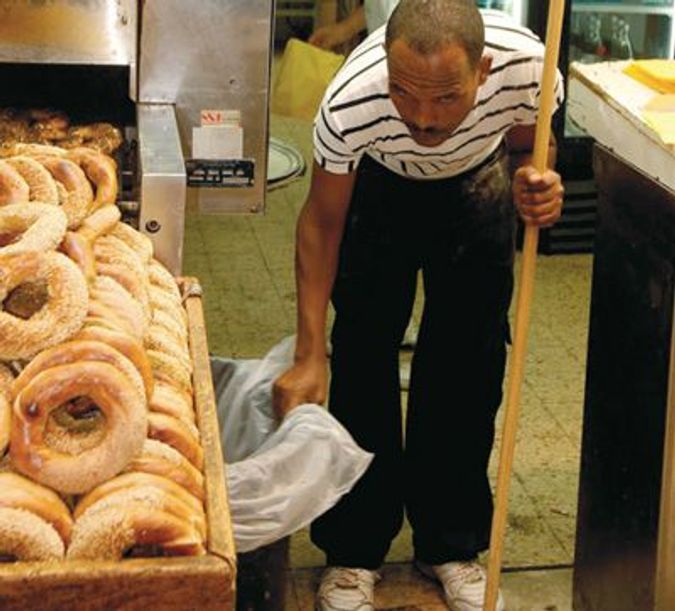 Destination: At Tel Aviv?s Central Bus Station an African worker sweeps up after hours in a pizzeria.

The Central Bus Station is also the most popular destination for Israel’s estimated 300,000 migrant workers. Though most entered legally on temporary visas, many have overstayed their permits. The station is located on Tel Aviv’s southeastern periphery, home to 80% of Israel’s foreign workers, who hail from countries as diverse as the Philippines, Romania, Thailand and Ghana. Amid defunct escalators and abandoned vending stalls, clubs like Selam and the Filipino Bahay Kubo offer the migrants a world of their own, a place where few Israelis venture; here the society that employs them will not necessarily ever see them. Outside the station’s walls, however, the migrants’ legal and economic status present challenging obstacles for their continued presence in Israel.

Most recently, at a July 18 meeting on Israel’s immigration policy, Prime Minister Benjamin Netanyahu singled out the “flood of illegal workers infiltrating from Africa” as “a concrete threat to the Jewish and democratic character of the country.” It is a stream he means to stop. Last January, Netanyahu visited the Israel/Egypt border, through which these refugees must pass, and pledged to build a militarized wall in the style of the barrier that some Americans advocate for the America-Mexico boundary.

“In recent years, the massive influx of foreign workers into Israel produced problems with security, drugs and, crucially, by penetrating the labor market and eroding wages,” Netanyahu said at the time.

Yet despite this concern, Netanyahu’s government issued permits for 120,000 foreign workers last year — breaking all previous records. These laborers, brought in on temporary visas and finite contracts, dwarf the number of asylum seekers entering the country overland from Africa. An average of 6,000 African migrants have crossed into Israel in each of the past three years, according to Israeli Defense Ministry statistics. On its side of the border, Egypt’s policy is to shoot at those found crossing into Israel, and dozens are killed this way each year. Yaacov, who made it past this deadly gauntlet, was detained upon entering Israel. He spent three weeks in Ketziot, a large holding facility in the Negev desert where nearly 1,500 African migrants are imprisoned.

Typical of asylum seekers, Yaacov was released into Tel Aviv with an indeterminate status. Israel has yet to formulate a consistent policy with regard to migrants from Sudan and Eritrea. Under United Nations rules, Israel cannot deport them because of the mortal danger they face in their home countries. Other Western countries accord refugee status to thousands of such asylum seekers each year. But Israel has thus far refused to review most of their cases or to offer refugee status, according to statistics Israel reported to the U.N. High Commissioner for Refugees.

Instead, the state places asylum seekers under a “temporary protection” status that prevents them from being arrested but does not allow them to legally acquire housing or work. Many squat in and around the Central Bus Station. At a park down the road, employers pick up the strongest migrants for illegal day labor.

The Central Bus Station has long been condemned as a catastrophe of urban planning and as a commercial failure: In 2007, a panel of Israel’s top architects unanimously labeled it Israel’s worst piece of architecture. The world’s largest bus station at 2.5 million square feet, it opened in 1993 and was intended to serve as a major transit center and mall. Most Israelis, however, commute through the more conveniently located Arlozorov depot. Despite housing more than 750 businesses, according to the station’s general manager, the mall — a disorienting multi-level maze of bizarre proportions — remains riddled with gaping vacant spaces and businesses whose doors have been locked (or were never opened) over the past 17 years.

On an early summer evening, deep in the fluorescent-lit bowels of the station, a young Israeli with slicked-back hair and rhinestone studs presided over a haphazard pile of high heels lying in the middle of the floor. A boisterous ring of middle-aged women surrounded the shoes, trying them on and consulting with each other in muffled yet excitable tones. These foreign workers speak scant English and no Hebrew. Most turned out to be from Nepal, India or China. The toothpick-chewing merchant negotiated prices by wagging his fingers to indicate numbers, and the women nervously responded by holding up the shekels they were willing to pay.

“It would be better if they weren’t here,” said Kami Khamami, the stocky owner of Ambassador Shoes, as he observed the scene from his storefront a few feet away. Khamami emigrated from Iran as a youth, and has sold shoes for 25 years. “The foreigners take work from Jews,” he complained.

Business owners are also concerned about security in the station. Just as it provides shelter to foreigners, the cavernous station is also a haven for criminals. Police have named it Israel’s No. 1 destination for runaways, prostitutes, drug dealers and addicts. Israeli homeless often avoid sleeping in the station out of fear, and three rapes were reported to police in 2009.

Netanyahu’s government has played up the connection between foreign migrants and societal degeneration. “If hundreds of thousands of foreign workers come here now, they will bring an abundance of diseases with them: hepatitis, measles, tuberculosis, AIDS and drugs,” said Interior Minister Eli Yishai, of the Shas party.

In recent months, Yishai’s Interior Ministry has broadcast dramatic commercials in which unemployed Israelis tell stories of being replaced by illegal migrant laborers. The ads’ slogan is, “Don’t Hurt Our Livelihood.”

But Israeli immigration policies contradict one another, while deepening the country’s problems with undocumented labor, according to a report issued by 10 leading Israeli human rights groups, including the three human rights groups. Following the prime minister’s speech on the Egyptian border, a Knesset committee claimed that more than 1 million Africans in Egypt sought to enter Israel. U.N. statistics, however, show that there are only 41,000 asylum seekers in Egypt, of whom only 18,000 have expressed interest in moving to Israel.

The report by the coalition of human rights groups noted that Israel’s policy of bringing in hundreds of thousands of contracted foreign workers greatly compounds the strain of asylum seekers denied the right to work legally. Foreign workers are imported primarily through manpower agencies in their host countries, at a significant cost to the migrants themselves. Chinese construction workers, for example, pay $30,000 for a three-year stint in Israel; it takes two years to pay this off.

Netanyahu has been a pioneer of the foreign-worker phenomenon. During his first term as premier, in 1996, he more than tripled the number of foreign worker permits, breaching 100,000 for the first time. After the first intifada, the trend accelerated as Israel began to restrict the entry of Palestinian day workers, who comprised 8% of the Israeli work force. Migrants now dominate low-paying sectors: Filipinos in elderly care giving, Africans in housecleaning and food services, Chinese in construction and Thais in farm work. As with the Palestinians, Netanyahu emphasizes the “demographic threat” of a growing non-Jewish population. 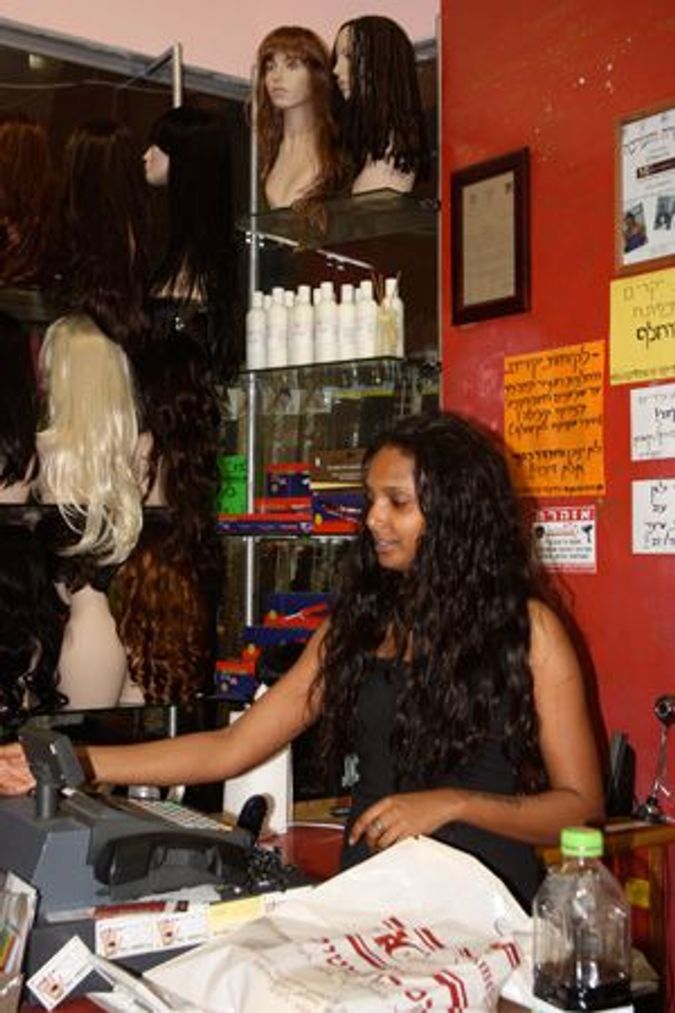 **A Place Of Refuge: An African woman works at a hair exten- sion shop in the bus station mall, a place where many of the refugees find work. Image by ROBIN PROLL

Despite the harsh rhetoric aimed at African asylum seekers, Israel’s governments have largely failed to enforce existing rules for contracted foreign workers who overstay or lose their permits, according to an internal Knesset study released in December 2009. As a result, some migrants have lived in Israel for 20 years. A generation of their Israeli-born children speaks Hebrew as a first language, celebrates Jewish holidays, learns in Israeli schools and even dreams of joining the Israel Defense Forces. A pending plan to deport more than 2,000 Israeli-born children of migrants generated much controversy this year, and Netanyahu backtracked from the plan’s scheduled implementation at a July 25 Cabinet meeting.

Meanwhile, unconcerned with politics, Win Bais, a 15-year-old child of Filipino migrants, comes to an empty expanse of hall space in Tel Aviv’s bus station twice a week to practice break dancing. The closest business, a sleepy man selling used Russian books and pirated DVDs off a wooden table, doesn’t seem to mind Bais’s boom box. Through posting pictures of their moves on Facebook, an ad hoc group of teenagers of which Bais is a member has found its way to this improvised dance floor from across Israel. Bais was born a few blocks away.

“There is no other place,” Bais said. He was referring either to the bus station or to the country where his parents work but cannot stay.