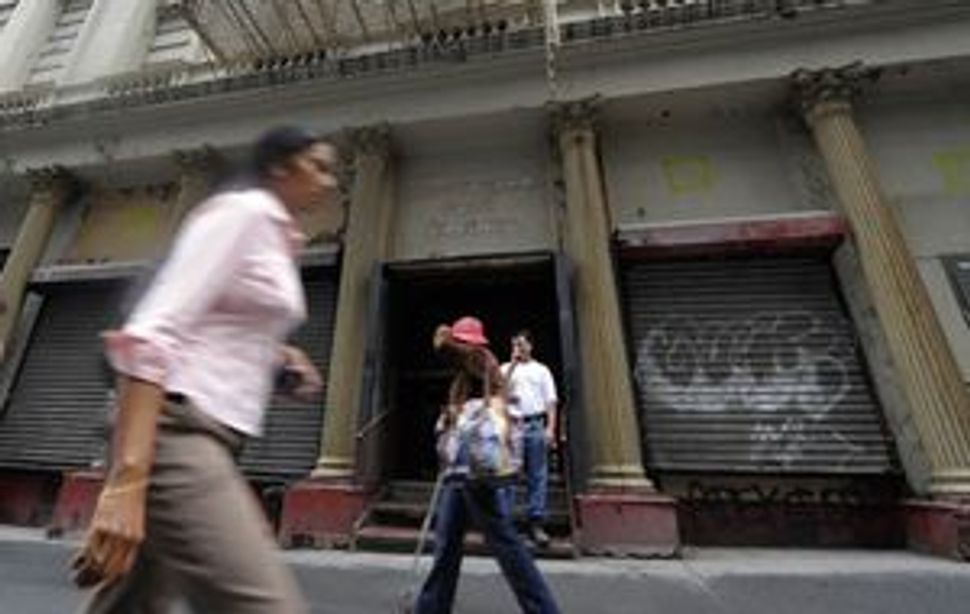 Place of Protest: The building on Park Place in Lower Manhattan has been empty since the 2001 terrorist attacks. Though Muslims worship there now, plans to build a bigger Islamic center have drawn opposition Image by GETTY IMAGES 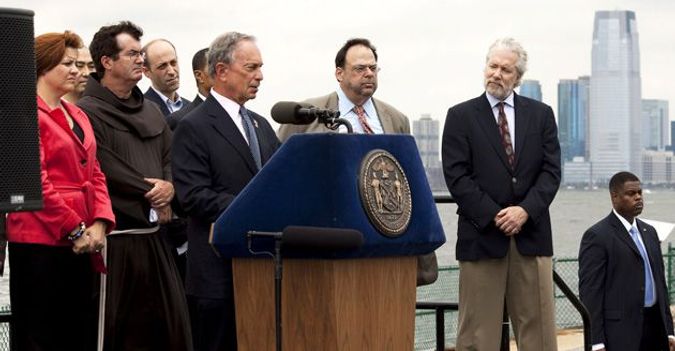 The dilapidated former Burlington Coat Factory on Manhattan’s Park Place seems an unlikely locus for a controversy that has swept up prominent national Republicans, political candidates, Jewish leaders, and New York City’s mayor. Through a glass door decorated with a bumper sticker reading “U.S.A.,” one can see a quiet, makeshift Muslim prayer space. Security guards say it is packed with more than 400 worshippers on Friday afternoons, though on a recent weekday the only traffic came from the handful of reporters and technicians from the satellite trucks parked outside the door. 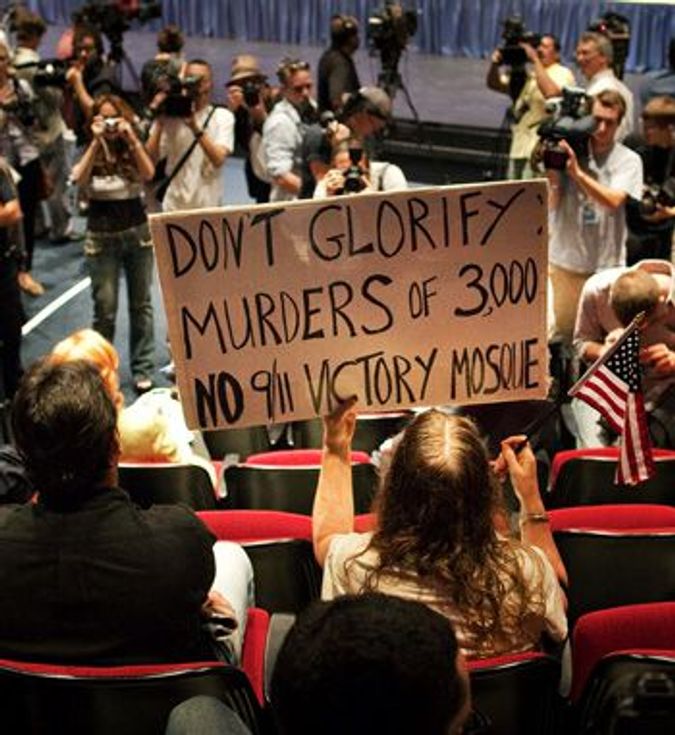 A decision by New York City’s Landmarks Preservation Commission on August 3 swept away the final procedural hurdle for the Islamic community center and mosque slated to be built on the disused retail site, clearing the way for the construction of a 13-story, $100 million center a few blocks from the former home of the World Trade Center.

But the controversy surrounding the building continues to percolate. Following a statement in opposition to the project by the Anti-Defamation League, two leading Jewish organizations have joined the ADL in calling on the sponsors of the center to be transparent in their fundraising and to explicitly reject terrorist ideology.

Unlike the ADL, the two groups — the Jewish Community Relations Council of New York and the American Jewish Committee — expressed support for the construction of the Islamic center near Ground Zero, and a JCRC-NY representative joined Mayor Michael Bloomberg on the podium as the mayor issued a full-throated denunciation of the objections to the mosque. But both Jewish groups have echoed language in the ADL statement that questions the moderate credentials of the mosque’s founders.

“[D]o the center’s leaders reject unconditionally terrorism inspired by Islamist ideology?” asked AJC executive director David Harris in an essay posted online. “They must say so unequivocally…Otherwise, the pall of suspicion around the leaders’ true attitudes toward groups like Hamas, Islamic Jihad and Hezbollah will grow — spelling the center’s doom.” 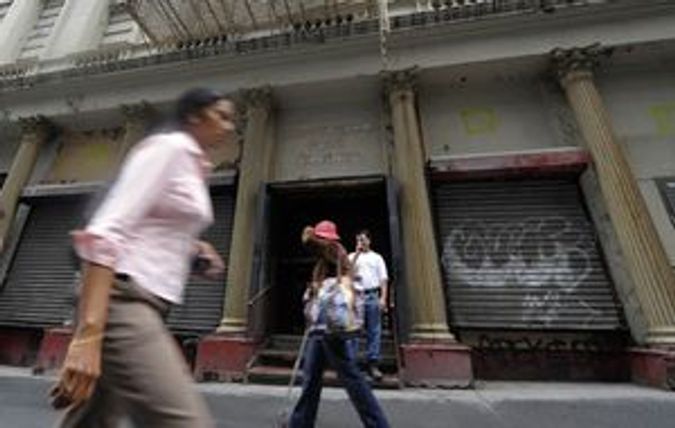 Place of Protest: The building on Park Place in Lower Manhattan has been empty since the 2001 terrorist attacks. Though Muslims worship there now, plans to build a bigger Islamic center have drawn opposition Image by GETTY IMAGES

The project, formerly known as Cordoba House but now dubbed Park51, is slated to include a swimming pool, an auditorium, restaurants, bookstores and a prayer space. Organizers say it is modeled after Jewish community centers.

In interviews with the Forward in May, Jewish interfaith activists broadly praised Imam Faisal Rauf, the pivotal figure behind the community center effort, as a leading moderate in the Muslim community and a dialogue partner for Jewish groups, although some criticized the decision to build the mosque and community center so close to the former site of the Twin Towers.

“He’s one of the most constructive forces of Islam in the U.S. today, and indeed internationally,” Rabbi David Rosen, AJC’s international director of interreligious affairs, said at the time. “I think he is a very fair man, and the kind of Muslim voice we need to empower and encourage.”

In an interview on August 2, ADL national director Abraham Foxman seemed to concur. “I know he’s moderate; I know we’ve worked with him; I know we’ve put him on our platform,” Foxman said.

But in its July 28, statement, the ADL asked the center’s planners to reveal their donors, and called “legitimate” questions about whether its leaders have “connections” with “groups whose ideologies stand in contradiction to our shared values.” Foxman also told the Forward that he has questions about the imam.

“Everybody’s saying…this is the Muslim messiah of reconciliation and moderation. I then have a question. If you were the spokesman of moderation and you want to heal, why do you insist on doing it contrary to the wishes of the people who have been hurt the most,” Foxman said, referring to the families of those killed on September 11, 2001,who, Foxman contends, largely oppose the center.

In its statement, the JCRC-NY said that it will monitor the center’s donors, and called on the center’s sponsors to “memorialize the victims by squarely repudiating the twisted ideology of the terrorists.”

And the AJC, in a press statement that included a summary of Harris’s essay, “urged the founders of the center to urgently address concerns about funding and support for terrorism.”

“Rauf has spoken in favor of Hamas. That we know,” said Kenneth Bandler, a spokesman for the AJC.

In June, Rauf was reported to have refused to call Hamas a terrorist organization in a radio interview. The imam, who is out of the country, could not be reached for comment. But in recent comments to The Wall Street Journal, Daisy Khan, Rauf’s wife and the executive director of the American Society for Muslim Advancement, one of the groups spearheading the community center project, said, “Hamas commits atrocious acts of terror…Imam has outright condemned all forms of terrorism.”

In an interview in May, Rauf told the Forward that he saw it as his organization’s role to “magnify the voice [of those] who have condemned and continue to condemn the action of 9/11, and to be part of the rebuilding and part of the interfaith fabric of New York City.”

All three Jewish groups issued statements affirming the right of Rauf and his allies to build the center. But the ADL, unlike the others, said it was opposed to the construction. “This is not a question of rights, but a question of what is right,” the ADL said.

Foxman said that the ADL’s opposition to the project stems from what he sees as similarities to the controversy in the late 1980s and early 1990s over the presence of a Catholic convent at Auschwitz. The ADL and other Jewish groups argued at the time that the convent should be moved.

“We asked the world to understand our pain, our sensitivity to others wanting to heal us,” Foxman said of the Jewish community’s protests over the Auschwitz convent. Referring to the families of those who died in the attacks on the World Trade Center who oppose the construction of the Islamic community center, Foxman said: “I felt and we felt that here is another group who is in the same position.”

Foxman said he believes that “the overwhelming majority of the family members are opposed” to the project, but added that he has no statistical evidence to back up that belief. “It’s not everybody, absolutely. And you know what? There were…survivors who said let the [Catholic] Church build a convent or a church to atone at Auschwitz. But so what? The majority said no.”

But it’s not clear how many of the families of September 11 victims oppose the Islamic community center. One group, called 9/11 Parents and Families of Firefighters and WTC Victims, issued a statement lauding the ADL’s opposition to the project. “This whole area, for a variety of reasons, is a sacred ground,” said Sally Regenhard, a leader of the group. “To put something like this so close to the sacred ground — to us, it just offends our sensitivities.” Regenhard said that her group has “scores and scores” of active supporters.

Meanwhile, another organization of victims’ families, called September 11th Families for a Peaceful Tomorrow, has issued a statement in support of the mosque and cultural center.

And a spokesperson for Families of September 11, a separate organization, which claims to have more than 2,000 members, said that its membership is split on the issue. “I would be very hesitant when someone says that the majority of family members feel one way or the other,” said Brian Richardson, a consultant for the group, which has not taken a position on the project.

In a press conference on Governors Island on August 3, Bloomberg criticized those who questioned the right of the Muslim community to build the center. “We would betray our values — and play into our enemies’ hands — if we were to treat Muslims differently than anyone else,” Bloomberg said. “In fact, to cave to popular sentiment would be to hand a victory to the terrorists, and we should not stand for that.”

Not all Jewish groups have been as skeptical about the proposed Islamic center. J Street, the left-wing, pro-Israel activist group, issued a statement of support that did not specifically call on the proposed center’s sponsors to reveal their financing or to repudiate terrorist ideology. “What better ammunition to feed the Osama bin Ladens of the world and their claim of anti-Muslim bias in the United States,” said J Street president Jeremy Ben-Ami, “…than to hold this proposal for a Muslim religious center to a different and tougher standard than other religious institutions would be?”