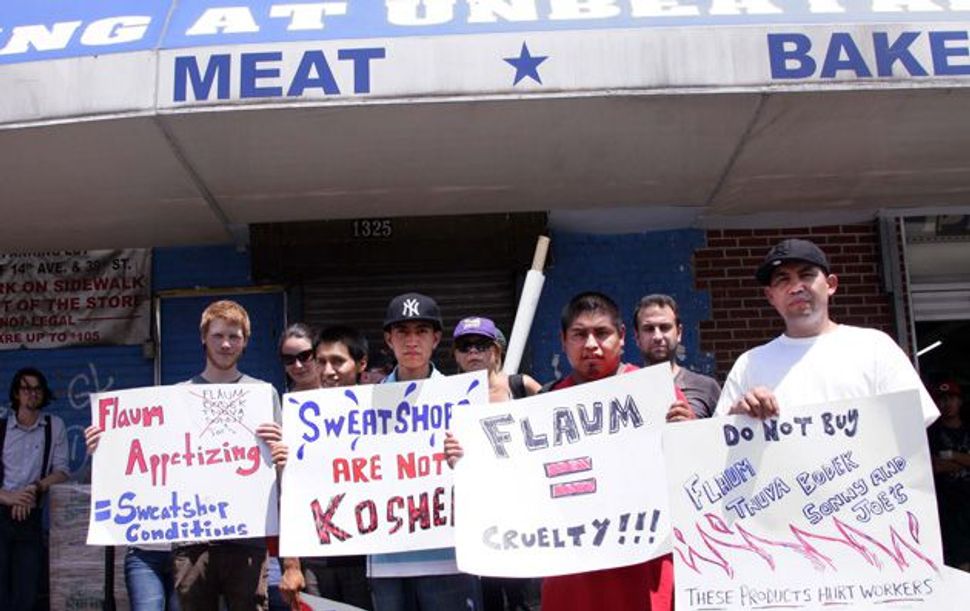 Complaints About Conditions: Protesters held signs outside the KRM Kollel supermarket in Brooklyn?s Boro Park on July 25. The store is a major seller of Flaum Appetizing products. Image by SHULAMIT SEIDLER-FELLER

Workers who were fired by a Brooklyn kosher food producer after demanding overtime pay have been protesting outside the owner’s house and a supermarket this summer, and preparing for a return to the National Labor Relations Board this fall.

Flaum Appetizing, Inc., a producer of kosher salads, pickles, and smoked fish, has been embroiled in the dispute since it fired17 immigrant workers in May 2008. The terminated workers had complained about working conditions and demanded to be paid overtime after working 60 to 80 hours a week. The NLRB ruled that Flaum had violated the workers’ rights, and ordered their reinstatement with back pay. Flaum has not complied, and a NLRB hearing is set for September 21.

“Our belief is that if you work, if you sweat and deliver a service, you’re entitled to have your legal rights protected, and that includes payment for your work,” said Daniel Gross, executive director of Brandworkers International, a not-for-profit organization that advocates workers’ rights and has taken up the cause along with the Industrial Workers of the World union.

“The [fired] workers are currently very active on the streets, and we seek dialogue, but we are also not afraid to fight,” Gross said.

Flaum representatives had no comment when contacted by the Forward.

According to the NLRB, after the IWW first contacted the workers in August 2007, Flaum offered them paid holidays and office perks, like a water cooler and refrigerator. Flaum also threatened the workers with “immigration problems” if they unionized. Additionally, in an effort to prevent the employees from suing for back pay of overtime wages, Flaum administrators called the workers into their offices, one by one, and asked for signatures on a release form that would offer $375 for settling the issue without a lawsuit.

After one of the workers was fired for union activities in May 2008, the others protested her discharge. Days later, Flaum fired the 16 protesting employees. An NLRB hearing in the fall of 2008 found that Flaum had violated the workers’ rights under the National Labor Relations Act, and the ruling ordered the workers to be reinstated and receive back pay. Flaum lost on appeal and has refused to comply with the orders.

In the hearing September 21, the NLRB will outline the back pay that is owed to each employee — a total estimated to be about $230,000, according to an NLRB document.

Brandworkers International joined the IWW in the dispute in May. They reached out to Moshe Grunhut, Flaum’s owner, for discussions, but they were rejected, Gross said.

The workers have protested in Grunhut’s neighborhood on weekends this summer. About 50 protesters staged a rally outside the KRM Kollel supermarket in Brooklyn’s Boro Park on July 25, carrying signs denouncing Flaum’s labor practices. KRM Kollel is a major seller of Flaum products. The store manager, who identified himself as only Yanky, said he was annoyed at the disturbance outside the store, and though he understood the point the union and workers were making, he did not think it would make a difference for customers.

“They disrupt my business and stand outside and yell: ‘Don’t buy Flaum! Don’t buy Flaum!’ I tell them that this is a religious business. If they were telling me not to buy it because it’s not kosher, I would understand. But this is a business reason, and if the customer wants to shop, they will shop. This won’t change their mind,” the manager said, adding that sales of Flaum products have not been affected.

Gross said he was disappointed by the nonchalance of the Jewish community. “They are unwilling to take the step and engage in dialogue with Flaum. It appears that there is a misguided interpretation of religious solidarity, and that is blinding them from seeing what’s right or wrong,” Gross said.

He said he thought the theft of wages that were due to workers should be “put on par with other crimes.”

Alvin Blyer, regional director of the Brooklyn office of the NLRB, brought attention to what he described as the elephant in the room: the immigration and legal status of the workers. “At the hearing, the employer will claim that some or all of these workers are undocumented; however, there might be an argument, an exception, a way to get around their case,” Blyer said. He believes that Flaum’s attorneys will cite Hoffman Plastic Compounds Inc. v. National Labor Relations Board, a 2002 Supreme Court case stating that an employer did not owe back pay to an undocumented worker.

In the Flaum dispute, the company would have the burden of showing that the workers were undocumented. Blyer said that if the issue of the workers’ legality is brought up, the NLRB will contest it and continue fighting for their rights.

Juan Romero emigrated from Mexico in 2005 and worked at Flaum for three-and-a-half years before he was fired. “We were really worried being without work. We didn’t have money, and we couldn’t even pay the rent. I did receive support from the union to make it through, but… we were really desperate after we got fired,” Romero said, speaking through a translator. It was another month and a half before Romero, now 21, found employment. He is now a chef’s assistant at a restaurant in Manhattan and is “much happier” in his new job.

Romero, who sends a significant portion of his paycheck back home to his family, is disturbed by the Jewish community’s response to the plight of the discharged workers. “It’s frustrating when I hear, ‘All we care about is that we get our food, and we’re not interested in anything else,’” he said after a day of protesting outside KRM Kollel. “[The American legal system] should protect us more and not be in favor of the companies that are making money off of us.”

Although Romero is single, most of the fired employees who worked at Flaum had families that they supported with their salaries. Gross said he thought that their situations were much graver than Romero’s.

“I don’t think this is about principles for Flaum. I think it’s all about the money, and that’s why I think we will prevail, because for us it’s all about dignity, and in the fight between money and dignity, dignity wins,” he said.