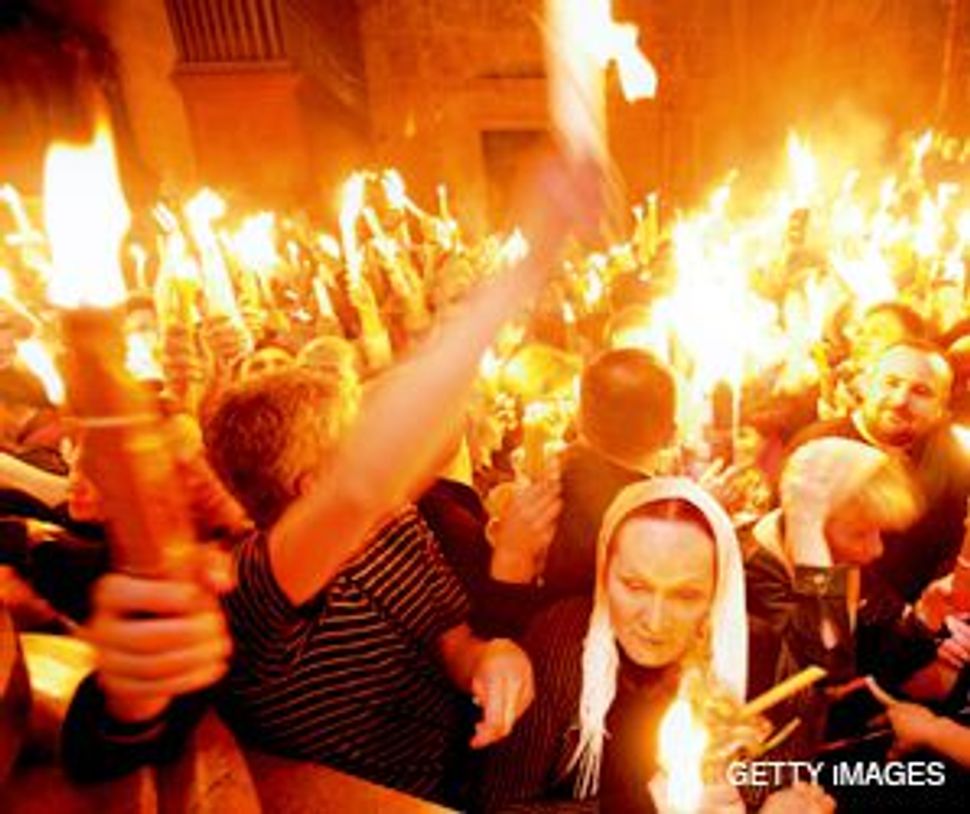 Fired Up: For centuries, Orthodox Christians have gathered each Easter at Jesus? final resting place to celebrate the Miracle of the Holy Fire, but concern is high that a turf battle may mar this year?s ceremony.

Jerusalem – With big egos competing for sacred space and urgent claims that a miracle is imminent, Jerusalem’s latest religious conflict has all the makings of a classic Holy City conflagration. All, that is, except for the cast of characters: There is not a single Jew or Muslim involved. 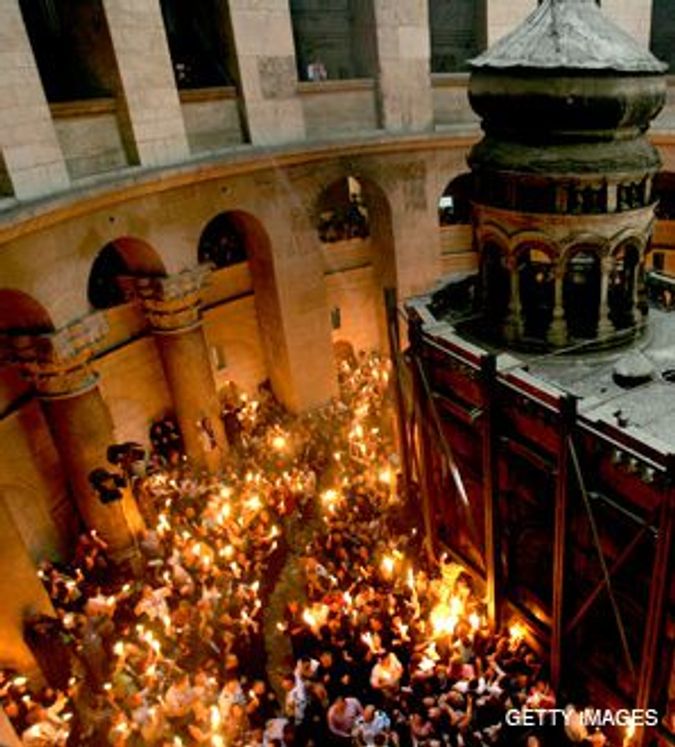 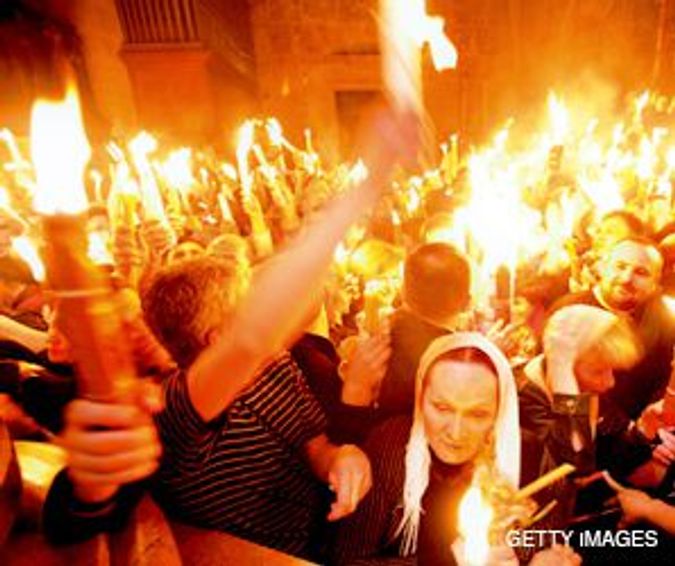 Fired Up: For centuries, Orthodox Christians have gathered each Easter at Jesus? final resting place to celebrate the Miracle of the Holy Fire, but concern is high that a turf battle may mar this year?s ceremony.

Tensions are so bad between two of the six Christian denominations that share control of the Church of the Holy Sepulchre — by tradition the site of Jesus’ tomb — that some fear priests and pilgrims may come to blows over Easter.

The high point of Easter celebrations at the church is a ceremony known as the Miracle of the Holy Fire, during which candles are said to be lit by the miraculous intervention of the Holy Spirit in the shrine reputed to contain remains of the tomb. The event takes place on Orthodox Easter Saturday, falling this year on April 27. It typically attracts thousands of pilgrims.

The question of who enters the tomb to receive the fire is an ongoing cause of friction among the church’s resident sects, and this year tensions have been exacerbated by a series of physical altercations, here and in Bethlehem, that left monks and priests variously hospitalized, arrested and banned from the church.

The pronouncement caused fury among Armenians, who continue to insist that both should enter. Every year since has seen a standoff between the two sects outside the shrine.

Leaders of other denominations that share control of the church have tried mightily to mediate an agreed procedure. Each year, however, the prevailing practice has been the same one used to allocate the last seat on a subway: an unholy scuffle. On the subway, such tiffs rarely cause more than a muttered curse. But this is Jerusalem, where every argument is a potential holy war. Compounding the tensions is the fact that the battleground is the holiest of Christian shrines, during a most sacred ritual in which God Himself is believed to bestow a gift directly on man.

To the Armenian church, the attempted exclusion amounts to being told that Armenian Orthodox clerics may communicate with God only through the superior Greek Patriarchate, said George Hintlian, an Armenian historian who served for 25 years on the patriarchate’s restoration committee. “This is why we expect to go in together,” he said.

A spokesman for the Armenian Patriarchate, Archbishop Aris Shirvanian, described his sect as “an independent and equal church to them [the Greeks] in the holy places. We are not inferior to them, and demand restoration of our right of several hundred years’ standing.” The Greek Patriarchate declined to comment.

Given these tensions, every year “there is danger of violence and actual bloodshed at the ceremony of the Holy Fire on Easter Saturday,” said Jerusalem lawyer Shmuel Berkovitch, an expert on holy sites who is often called in to mediate between the denominations. This year, however, the risk is heightened because of recent clashes between the two warring denominations, he said.

When tensions flare, it is usually connected to the fact that the Holy Sepulchre and the Church of the Nativity in Bethlehem, supposedly the birthplace of Jesus, are elaborately divided up between different denominations, each of which jealously guards every square foot — and occasionally seeks opportunities to expand its domain. The current rules for shared governance were put in place in 1852 by the Turkish rulers of Palestine.

In addition, there is common territory, where nothing may happen — not even cleaning — without the consent of all parties. For this reason, the same wooden ladder seen in 150-year-old etchings of the church still sits on a windowsill by the entrance, as nobody has the authority to take it away. The same stalemate explains a stench that tends to emanate from the toilet during pilgrimage season, and the absence of a fire exit.

Last month, an Armenian monk and a Greek monk traded punches in the Holy Sepulchre. The Armenians were holding a procession that needed to pass an altar controlled by the Greeks. An Armenian monk asked Greek pilgrims standing there to step back and clear the path.

Greek monks gathered to object that the Armenian cleric was undermining their authority, and an argument followed with Armenians who rallied round their colleague.

“One monk from each side attacked the other,” said Shmueli Ben-Rubi, spokesman for Jerusalem police. “Somebody called us to say that two monks are fighting, beating each other.”

He said that no injuries were sustained, and both monks were arrested. “They were soon released. We regard it as a mutual attack and are still investigating, seeing what we can do. When we have finished investigating, we will see if we are going to press charges.”

Meanwhile, the monks in question were banned from the church until last week, he added.

The incident came on the heels of another clash at the Church of the Nativity last year, arising from a case of unauthorized cleaning. According to the Turkish rules, tidying up constitutes a declaration of ownership. Tensions flared in December when Greek priests tried to clean an Armenian-run area. The Armenians deemed it a “serious issue,” fearing it could lead to future claims to the “territory,” Shirvanian said.

The two sides hit each other with brooms, and seven Greeks and two Armenians were hospitalized with minor injuries.

With these clashes fresh in the minds of the two sides, Berkovitch predicts that both parties will be more determined than ever to get their own way over the Holy Fire. “Anything to inflame the already-high tensions before Easter is very bad news,” he said, adding: “There will be tension until the last minute.” Ben-Rubi confirmed that there will be a reinforced police presence, at least partly due to interdenominational tensions.

Leaders of the Franciscans — the Catholic order that, under papal decree, acts as the sole caretaker of most other Christian sites in the Holy Land — are also worried about the situation at the Church of the Holy Sepulchre.

“There are lots of tensions between Greeks and Armenians,” said Father Athanasius, one of the highest-ranking Franciscan clerics on the scene. “Tensions are higher than they were last year, and I don’t know what will happen.”