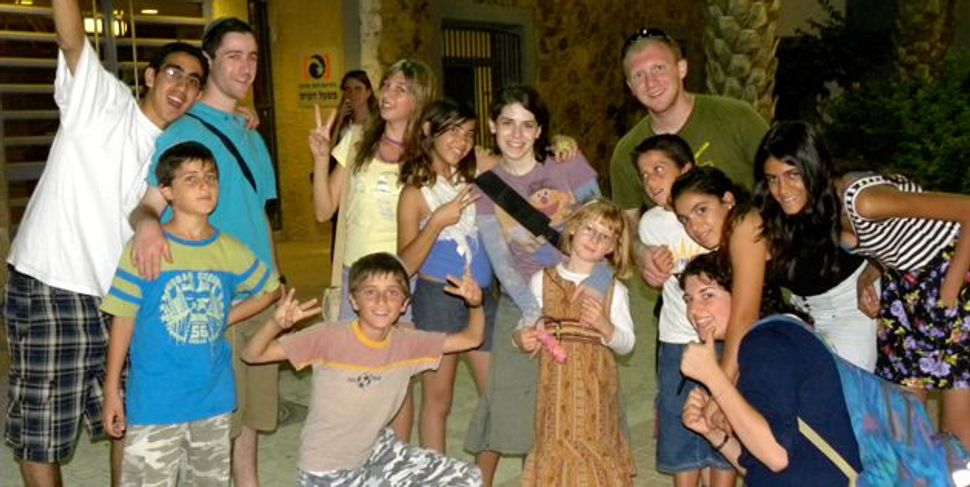 Summer Fun: A group of young people at the Dimona Summer camp pose for the camera. Image by COURTESY OF YESHIVA UNIVERSITY

It’s rare for an American to set foot in Dimona. With an unemployment rate of 14.5%, almost double the national average, Dimona is one of Israel’s poorest cities. Tourist attractions are nonexistent, and if non-Israelis have heard of the city, it’s because of its nuclear reactor.

But for 22 high-flying American university students, it’s this city in the Negev desert that they are calling home this summer.

They are living there for five weeks, trying to introduce an American-style camp into this spot on the Israeli periphery where, during summer vacation, youngsters often wander the streets with nothing to do.

One out of two children in their camp comes from a school program for youngsters deemed to need special educational or emotional support, and many of the campers come from backgrounds with serious family or economic problems. The best indication of the campers’ socioeconomic profile: Camp fees for a month are a heavily subsidized $65, but 45% of the children’s families still rely on a scholarship to enable them to send their kids. The real cost of a place is $1,500.

At the Dimona municipality, Dorit Peretz, an education department official, said that the camp is sparking a revolution in the mentality of Dimona’s often despondent youngsters: “It’s not just that they learn English — they see the leaders from abroad and think, ‘Just because I live on the periphery doesn’t mean I’m less good; if they can succeed, I can succeed.”

The Dimona Camp, which comprises 100 local elementary and high school students, is run by Yeshiva University Center for the Jewish Future and funded by two private American donors and by the American charity Repair the World. It is in its third year. Of the 22 counselors, 19 are Yeshiva University students and the remaining three are from other schools.

CJF also ran a camp in Yeruham, another poor southern Negev locale, until last year. There, CJF achieved its ultimate aim of empowering the local community: As of this year, the local municipality has taken over the camp and it continues to run, allowing the Americans to shift all their energies to Dimona and double the size of the camp there.

In 2008 when CJF first approached the Dimona municipality with a proposal for the camp, officials believed that local apathy would make this camp an instant failure. “When we first met, the municipality said that teens are not interested in going to a program — you won’t get people for this,” said Shuki Taylor, CJF project coordinator in Israel. Today, the municipality itself deals with recruitment and enrollment.

On a Thursday at the end of July, the Dimona campers were in for a rare treat — a free afternoon in the big city, Jerusalem, in a mall, with $5 to spend on food. They had been in Jerusalem for two nights, and this was the final outing before they returned home.

The campers chatted enthusiastically about their time in Jerusalem and about the program, which includes English lessons; workshops in subjects that they choose, including fashion, dance, sport, art and rap, and preparation for a grand end-of-camp talent show to which all parents will be invited. “If only English lessons were like this at school, with exercises and games,” said Alina Shulman, 12. Vova Dizyova, 14, commented, “Camp has improved my life and has opened up doors for me — because learning English is really crucial today.”

Experiences of the American counselors indicate that campers really mean what they say about the English skills acquired. A few months ago, counselor Eric Israeli, 21, received an instant message on his computer. It was from one of last year’s campers, a 16-year-old whose father is in prison. He wanted Israeli to know that he had been accepted to a career-development program for his final two years in school to learn a trade, welding. The camper said that he was accepted thanks to the English he learned at camp. “This was empowering for me, because sometimes here you struggle and wonder if you are making a difference,” Israeli said. “Something like this provides a clear answer.”

Some Dimona youngsters spoke of the confidence that they have gained from the camp. “I feel that I’m much more confident in myself now,” 13-year-old Sam Barkan said. “Before camp, I was very scared to open my mouth in English. Now I am so much more comfortable — and it’s not only English, it is everything else we do, as well.”

Giving the children confidence was one of the aims of importing the American summer camp model. “In America, there’s a lot of emphasis on the individual. American kids always have the experience that they’re in the center, and with this camp, we’re able to share that experience with the kids of Dimona,” said counselor Michi Hayman, 22.

For many of the youngsters, the simple fact that students from America cared enough to head to their patch of the Israeli periphery has had a huge impact. “Everyone in Israel wants to visit America, and yet they come from the U.S. and want to come here!” remarked Aviel Madi, 13.