‘Other’ Jews in a Catholic Nation: A Community of Working Class Converts 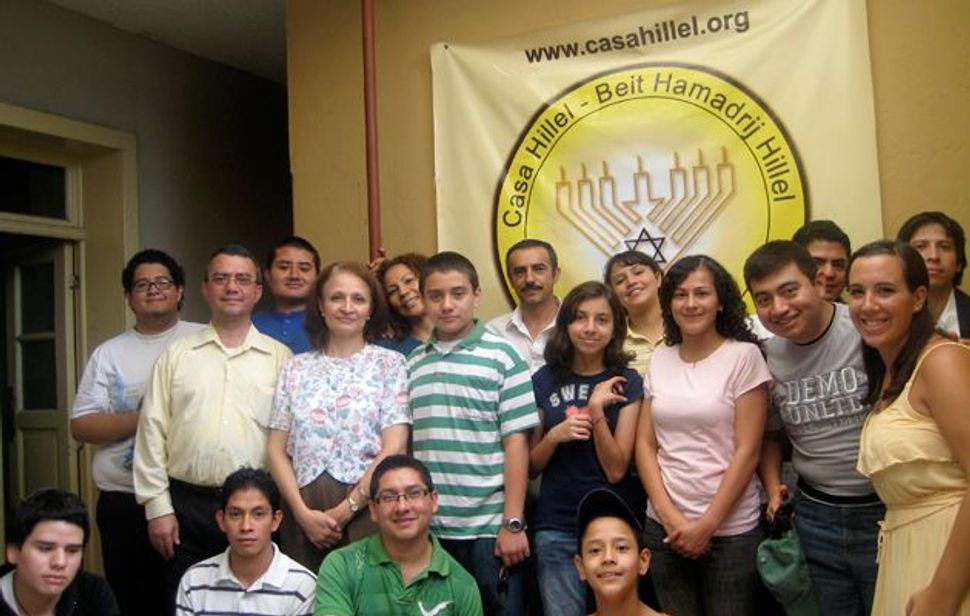 Jewish Souls: The small community of converts sorrounding Casa Hillel in Guatemala City has about 50 members. Image by RACHEL RuBiN

Like many 21-year-old travelers, I had no plan. No money. And no real assurance that I was even going to be picked up from the airport on a late rainy evening in Central America’s most notoriously dangerous city. Because I also knew no one.

All the same, I hopped on a plane to Guatemala City last May, convinced that my brothers and sisters in the faith of Abraham would receive me with open arms. After all, I had been welcomed earlier into the Panamanian-Jewish community for Passover and by the Jewish community in Costa Rica for Purim. I had discovered the widespread theme of marvelous Jewish hospitality, and it had fueled my adventurous side.

But this particular Guatemalan Jewish community was different from any Jewish experience I had ever had. Casa Hillel-Beit Hamadrij is a humble group of roughly 50 Christian-born converts who, unlike members of the country’s longer-established and more prosperous Jewish communities, come from Guatemala City’s struggling working class.

Alvaro Orantes, president of Casa Hillel, says that members of his community like to be referred to as “re-converts.” Some community members like to think they could be descended from Spanish crypto-Jews who fled the Inquisition, or from one of the Lost Tribes of Israel. But there is no evidence to corroborate any of this.

“My soul is Jewish,” said Efrain Hernandez, a member of Casa Hillel. “When I began to study Torah, I just knew that this was part of who I am.”

The community members’ lifestyles seem roughly comparable with that of many observant Conservative Jews. They keep the Sabbath, lighting candles on Friday night and marking its close with the Havdalah ceremony. On Sabbath and on major Jewish holidays, they refrain from using electricity — though they do drive to services and to each other’s homes because of the high level of violence in their neighborhoods. Once they arrive at their meeting place on a typical Sabbath, they stay there all day, having meals and studying Torah. Family homes serve as Hebrew and religious schools during the week.

Orantes, who works as a salesman at a local tea and coffee plant, said he began his personal path to conversion at age 16, when he would visit a Jewish cemetery in Guatemala City. There, he said, he felt a sense of peace that he never experienced when he went to Catholic Church.

Ten years ago, Orantes, now 50, and his wife, Jeannette, 53, made a decision to embark on a self-directed study of Judaism. By 2003, he said, his feelings about Judaism inspired him to go to a doctor and have himself circumcised. But the couple, who had begun to gather a like-minded community around them, still lacked a real teacher to lead them. Orantes said he was curtly rebuffed when he approached local Jewish leaders for assistance.

Beside Casa Hillel, there are four Jewish communities in Guatemala, all located in Guatemala City. Centro Hebreo (an Ashkenazi Orthodox community) and Maguen David (Sephardic) are both long-standing and wealthy. There is also the Chabad-Lubavitch community and a group of more or less secular Israelis that gathers for holidays and the Sabbath. Only the secular Israelis would even talk with them.

Then by fate, said Orantes, he discovered Rabbi Jacques Cukierkorn’s website in 2005.

Cukierkorn, a Brazilian-born rabbi at the New Reform Temple in Kansas City, Mo., operates an organization called Kulanu that focuses on discovering and converting lost Jewish communities of the world.

“We’d been looking for Judaism since 2000,” related Jeanette Orantes. The newcomers the couple had attracted were “interested, but confused,” Jeanette said, in uncertain English. “This is a kind of phenomenon in Latin America. Many people have been looking for being taught by the Jewish communities, but they are so closed, so we look for foreign orientation, and lucky us, we found Rabbi Jacques in 2005.”

Prior to meeting him, “There wasn’t anyone who could help us, giving trustable information,” she said.

Cukierkorn initially communicated with the nascent community over the Internet. Via video, he conducted classes in Judaism and discussed with them books he had assigned.

Eventually, he decided to convert Orantes and his wife and friends to Judaism, and to take on a role as the honorary rabbi of their community. Among other things, he also helped Orantes legally incorporate Casa Hillel as a religious organization.

Out of gratitude, the new converts named their group “Casa Hillel” after Jacques’s father, Hillel Cukierkorn.

A couple of times a year, Cukierkorn visits Guatemala and performs such rabbinical duties as conversion ceremonies. He also performs Jewish remarriages for couples who were married as Catholics before their conversion.

Cukierkorn’s synagogue has adopted Casa Hillel and is paying half its rent, providing its members with Jewish books in Spanish, Torah Scrolls, and other Jewish paraphernalia for their homes.

On one of his early visits, Cukierkorn, who felt the group should have local teachers to guide them, went with Orantes to meet Rabbi Shimon Lubelski, of Centro Hebreo, the Ashkenazi congregation.

According to Orantes and Cukierkorn, Lubelski initially agreed to meet further with Orantes to discuss teaching Judaism to his group. But he “called ten minutes later after he said he would do it” to cancel, said Orantes.

It is easy to imagine the fears that might make established Jewish leaders reluctant to convert the Catholic born aspirants in a heavily Catholic and very violent country. But there are also class issues. Most of the other Jews live in gated communities far removed from the everyday dangers faced by ordinary Guatemalans, as well as the country’s deep and widespread poverty.

During his visit to Centro Hebreo, Cukierkorn recalled, a synagogue administrator “was totally dismissive” of Orantes. “Had he been a dog, she would have noticed him more. She paid more attention to the chairs than to him… It was horrible!”

“These are some of the most committed, interested and eager people I ever encountered,” said the Reform rabbi. “After my own congregation, I can’t think of anywhere else in the world I wish to spend time.”

Calls and emails to Lubelski and leaders of the other Jewish communities were not returned. But asked in a 2008 interview with Hadassah Magazine about the Casa Hillel’s community’s outreach to him, Lubelski said his community does not perform conversions. “If people want to convert, they have to go to New York, Miami or Tel Aviv,” he said.

The Orthodox rabbi also acknowledged that mainstream Guatemalan Jews, most of whom are Orthodox, do not welcome Casa Hillel members and do not accept Cukierkorn’s Reform conversions.

“We respect [them], but we are not interested in any encounters between the two communities,” he said.

The rejection clearly stings. “I am not allowed to go to their minyan,” Casa Hillel member Santiago Castaneda told me with shame in his eyes.

The Castaneda family, who hosted me during my visit, gave me an inside look at the challenges they face as practicing Jews in their city.

On a Friday, I accompanied Raudith Castaneda, the mother, with the Castanedas’ two daughters as we spent a day preparing for the Sabbath. We cooked for the more than 30 people expected that night, carefully sifting through hundreds of spinach leaves as we made a casserole. There were charts of Hebrew letters on the wall, newspaper clippings of Israeli news, and a small table that stood in the center of their home, displaying a modest collection of their Jewish memorabilia.

Their 13-year-old son, Jose, a recent bar mitzvah, told me he will only marry a Jewish girl.

When Havdalah came the next day, the Castanedas and I stood around the table with our arms around one another’s shoulders and recited the prayers. It was a powerfully spiritual moment, although fleeting, as it was interrupted by a string of gunshots across the street.

“Now is the time we need to be united together,” Jeannette Orantes told me on the same visit. “And I am telling you ‘we’ because we are also Jews, as you are. The difference is that we chose to become Jews and you were born a Jew. We will run the same destiny with all of you, and we know this. The providence will provide us with what we deserve, on His perfect time.”

Jeannette said that her favorite holiday was Shavuot, when the Book of Ruth is read.

“How easy it was for her to become a Jew,” she said. “And what a lovely way of Boaz to accept her. Just let me share with you Ruth’s words: ‘Your people will be my people, and your God will be my God.’”

‘Other’ Jews in a Catholic Nation: A Community of Working Class Converts