These Jewish Interns Campaign for Washington, Not Against It 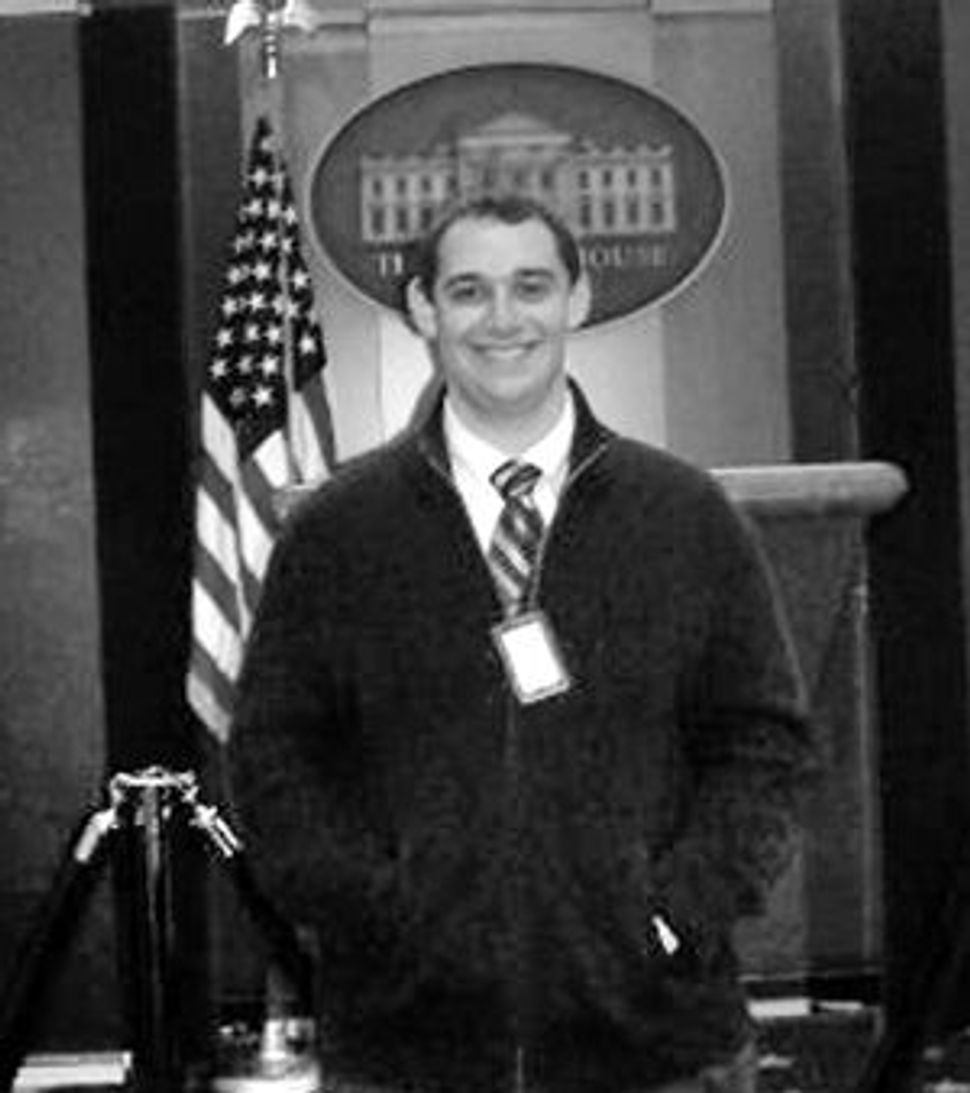 Close to Power: Jeremy Stone, a recent graduate of George Washington University, interned in the Washington headquar- ters of the Jewish Federations of North America. Image by COURTESy OF JEREMy STONE

They flocked to Washington during the summer months, driven by their desire to get a taste of politics and maybe gain some points in the networking game after they graduate college.

Crowding the Metro during rush hour, they often irritated locals by standing on the left side of the escalator, which by local custom is reserved for speed walkers. In congressional office buildings they were easily spotted, visibly uncomfortable in their khakis and suit jackets. 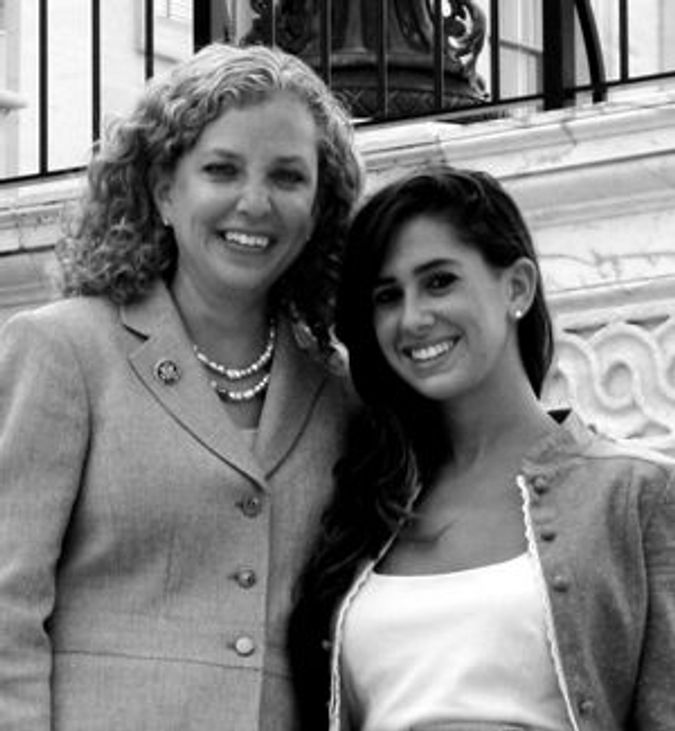 At the Capitol: Shelley Greenspan, a student at the University of Florida, interned at Congresswoman Debbie Wasserman Schultz?s office. Image by COURTESy OF SHELLEy GREENSPAN

Summer is the season of internships in the nation’s capital. And there were about 20,000 students participating in summer internships this year. Jewish groups estimate that some 6,000 of them were Jewish. Graham Hoffman, associate vice president at Hillel: The Foundation for Jewish Campus Life, said the figure is based on estimates by the American Israel Public Affairs Committee and by other Jewish groups that handled summer internships. The high percentage reflects the disproportionate representation of Jewish students in top universities and in campus leadership roles, Jewish activists say.

Some reported being significantly changed by their experiences. Lyndsi Sherman, who will start her junior year at San Diego State University this September, spent her summer at Americans for Peace Now, which operated a unique joint internship program with the American Task Force on Palestine. “This summer really shaped my views,” Sherman said. “Before, I was very ‘Israel is always right,’ but the internship at APN put me in a different place.”

Molly Benoit, a University of Florida political science major, was pleasantly surprised by her encounter with the world of politics and lobbying while interning at the National Education Association through a program organized by the Religious Action Center of Reform Judaism. “It really opened my eyes to a side of lobbying that is not part of the corruption we hear of in the news,” said Benoit, who stated that she would gladly return to Washington to lobby for public education after she graduates. 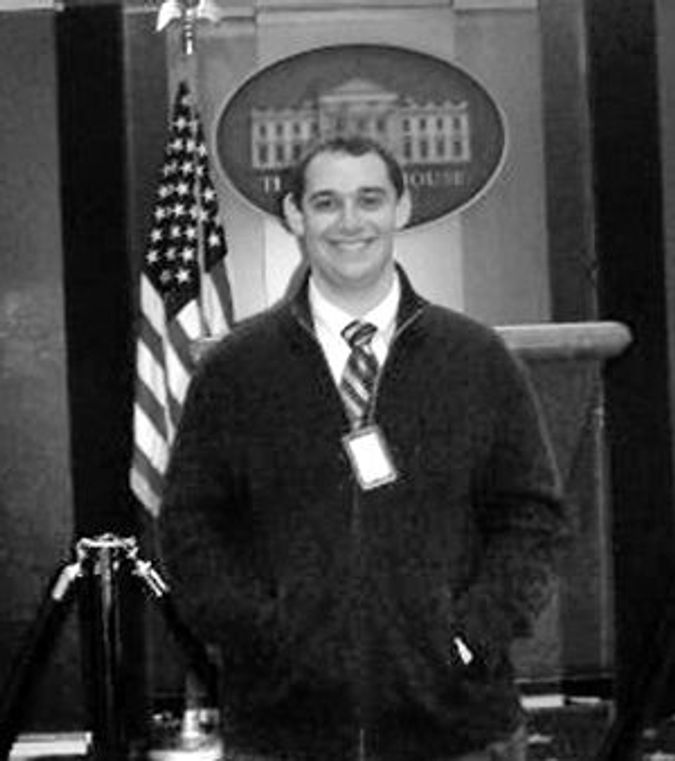 Close to Power: Jeremy Stone, a recent graduate of George Washington University, interned in the Washington headquar- ters of the Jewish Federations of North America. Image by COURTESy OF JEREMy STONE

By and large, the Washington experience has charged these young students with loads of enthusiasm. As they get ready to return to their campuses, the interns speak, starry-eyed, of America’s political capital. They loved their work, even when it entailed envelope stuffing and operating the photocopy machine. Many felt that the experience strengthened their Jewish identity. Moreover, they see themselves coming back to Washington to join the policymaking machine after graduation.

“I came out with a really positive impression of how Congress works,” said Shelley Greenspan, who will be a sophomore this coming school year at the University of Florida. Greenspan, who interned in the office of Florida Democratic Rep. Debbie Wasserman Schultz, said, “People work like dogs over there.” She added. “It’s easy to bash Congress, but things definitely happen here.”

In her summer stint in Congress, Greenspan spent much of her time taking calls from constituents. She also joined the congresswoman and her staff in briefings and committee hearings. “I share the views of the woman I worked for, and that is what made it so exciting,” she said.

Katie Mintzer from The Ohio State University said she was initially “frightened” by the world of Washington politics. “I was like a fish out of water, and I asked lots of questions,” said the 20-year-old Ohio native, who interned at the D.C. offices of the Jewish Federations of North America. Her early fear, however, quickly gave way to a new understanding of politics and government systems. “I even learned the acronyms,” she said, referring to Washington’s alphabet soup dialect of English, peppered with acronyms and abbreviations seldom heard outside the Beltway.

But for Josh Kahlili, a graduate of the University of California, Los Angeles, the encounter with Washington politics also made clear the interest-driven nature of the city. “In California, people are more laidback and nice to other people,” said Kahlili, who will soon begin a year of work on AIDS issues in D.C. before returning home for medical school. “Over here, people are motivated by interests; they have more of a tunnel vision.”

It’s a reality that some in the Jewish world have spent time thinking about. A July 22 conference, organized by Hillel and other organizations, brought together 200 Jewish and non-Jewish interns to discuss ways of changing public discourse and of bringing back civility to politics. “We found that interns were modeling what we think is wrong in Washington — a bunch of people who only think of their own interest,” said Wayne Firestone, president of Hillel. “We wanted to see if there is another paradigm that Washington internships can follow, to see if we can make it about being good citizens.”

But for the young interns, Washington wasn’t about only hard work and long hours in the office.

A Facebook page set up by and for Jewish summer interns offered a variety of after-work activities. Some were the expected schmoozing meetings in local bars, but others, such as the invitation to attend an evening cruise on the Potomac with Rep. Eliot Engel, could take place only in Washington.

For the first time this year, an organized effort was made to get Jewish interns together for networking to add some Jewish content to their Washington experience. In the D.C. headquarters of Hillel, activists — themselves interns — worked the Internet, trying to reach out through social networks and personal acquaintances to other Jewish interns in town. “We’ve become a resource on Jewish life in D.C.,” said Julie Scherbill, who attends the University of Michigan. Her colleague, Rachel Hodes from Rutgers, added, “We found out that people wanted us to tell them what is going on in town.”

Jewish groups with Washington advocacy offices are among the most sought-after destinations for Jewish interns from across the country. The biggest and most well known is AIPAC, which hosts dozens of interns who are later placed in congressional offices and thus learn pro-Israel advocacy from the perspective of both the lobbyist and the lobbied.

This year, as part of a growing competition between the two groups, J Street, the dovish pro-Israel lobby, launched its own internship program, which operates in a similar way.

Many of the Jewish interns interviewed stressed how their Jewish identity was strengthened by their summer encounter with Washington. “In my first year in college, I felt I didn’t want to involve Jewish things in my professional life — it would be like mixing business and pleasure. But after this internship, it has been an amazing change,” Mintzer said.

Jeremy Stone, a George Washington University graduate who also interned at the JFNA, said that doing legislative research enabled him to see how national issues such as Social Security affect the Jewish community. “I think I now have a more refined sense of the process and how it fits in with my Jewish background,” he said.

These Jewish Interns Campaign for Washington, Not Against It