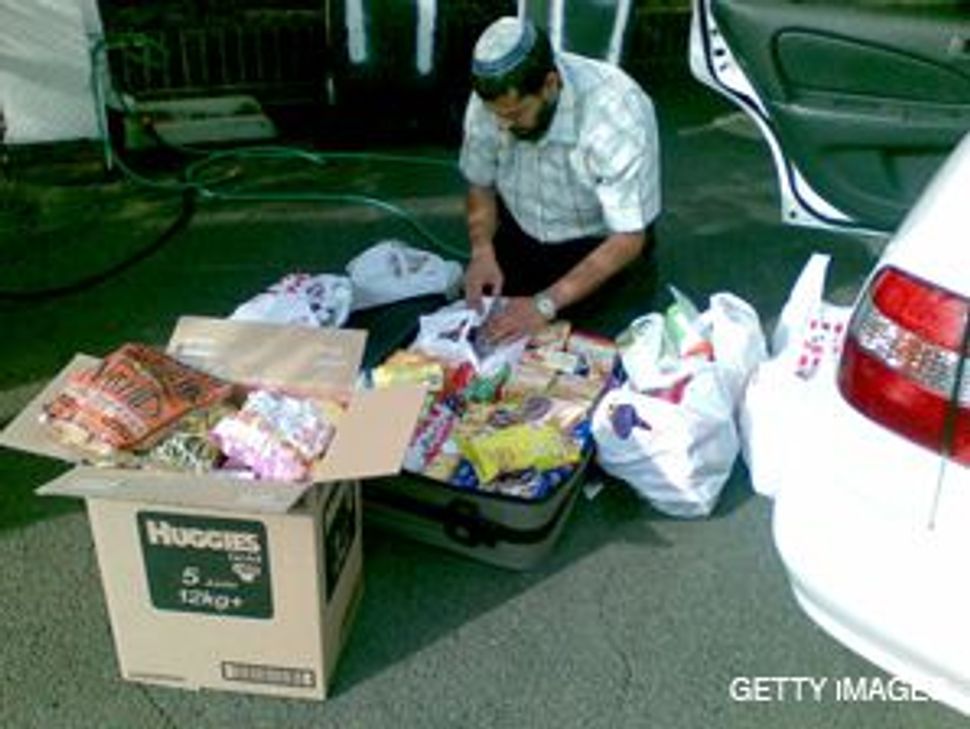 FOOD AND THOUGHT: David Alima, an Israeli rabbi who has moved to Zimbabwe, packed food in South

Harare, Zimbabwe — In early March, a South African rabbi traveled to Zimbabwe’s capital city on one of the many trips he has made in recent years to give material and spiritual sustenance to a Jewish community suffering from one of the world’s worst economic crises. 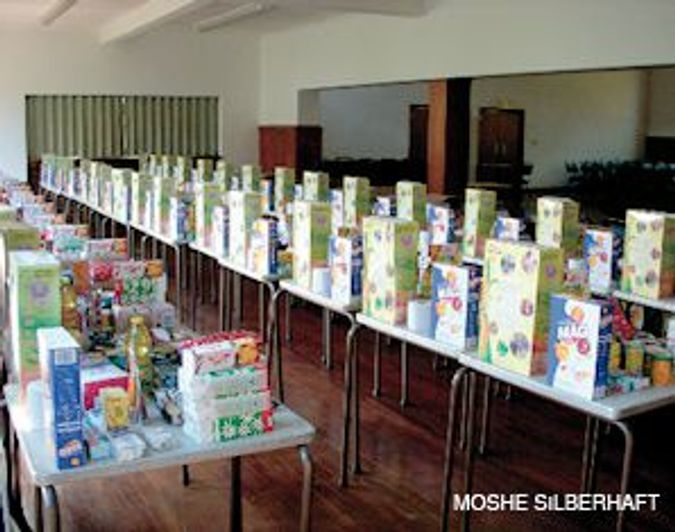 DAILY BREAD: The remnants of Zimbabwe?s formerly middle-class Jewish community came to Rhodis Hall in Harare last month for handouts from South Africa, including such basic supplies as soap, sugar and toothpaste. 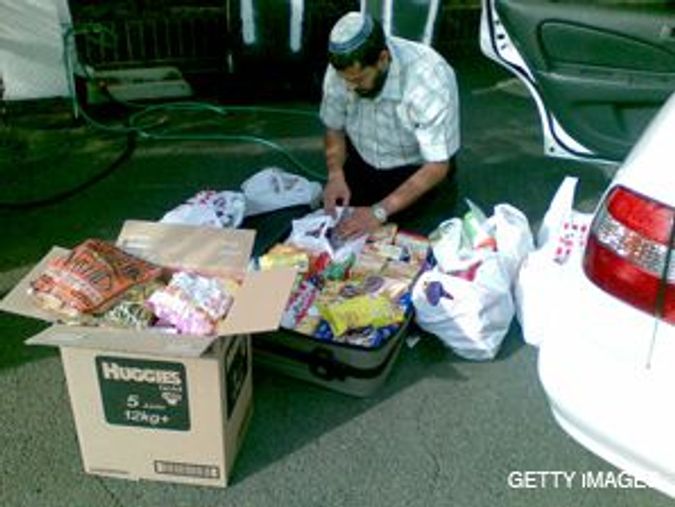 FOOD AND THOUGHT: David Alima, an Israeli rabbi who has moved to Zimbabwe, packed food in South 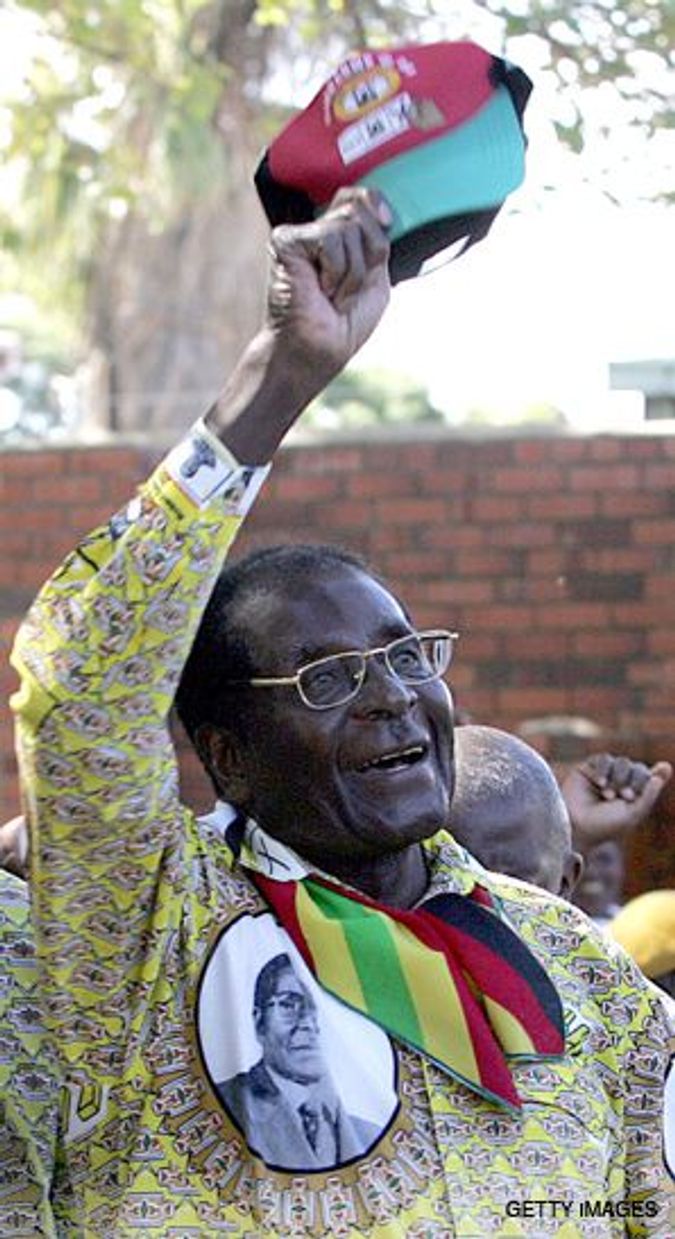 MUGABE: The country?s longtime president at a recent campaign event.

The rabbi, Moshe Silberhaft, held a meeting at the Rhodis Hall in Harare with 100 of the 190 Jews remaining in the city. Silberhaft distributed parcels including soap, toothpaste, washing powder, tea, coffee, sugar, cornflakes, jam, tinned fruit, tuna and soup.

Used to spending days searching for a few eggs or a bottle of milk (people jokingly describe themselves as “hunter-gatherers”), the Zimbabwean Jews arrived at the hall expectant and weary. They were decently dressed, if without a hint of current fashion. People appeared confused by all the attention, but at the same time recognized the surrounding madness.

“It’s very difficult to receive when… we’ve been used to giving,” another grateful member told Silberhaft.

An independent archivist of southern African Jewry, I accompanied Silberhaft as part of a private research project. The visit gave me an inside view on how the decay of Zimbabwe has torn apart even the formerly middle-class Jewish community here. Like everyone else, they have fallen on hard times. Roads are ruinously potholed. Tap water, when it runs, is murky brown for lack of purifying chemicals.

All these factors are playing into this week’s elections, in which the country’s dictatorial president, Robert Mugabe, 84, faces a serious challenge to his 28-year reign.

Opinion polls indicate that the opposition leader, Morgan Tsvangirai, holds a significant lead before the presidential elections. If Mugabe claims victory, as is expected, the opposition is almost certain to dispute it. Mugabe has warned of the security clampdown that would follow. Refugee camps have been prepared on the South African border, in case hundreds of thousands flee political violence.

For the country’s Jews, a potential exit route is being planned by the African Jewish Congress. As is true elsewhere in sub-Saharan Africa, Zimbabwean Jews are served by the South Africa-based congress, of which Silberhaft — the so-called “traveling rabbi” — is the executive director.

Jews were among the earliest whites who, along with Cecil Rhodes, moved north into Zimbabwe from South Africa in the 1890s. Always part of the white minority society, they were involved in the modernization and development of commerce and industry, particularly in manufacturing and textiles.

Numbering 7,500 in the mid-1960s, the Jewish exit from Zimbabwe began when Ian Smith’s white-minority government declared unilateral independence from Britain in 1965. Many went to Israel. More came to South Africa, particularly Cape Town. When Silberhaft first visited Zimbabwe in 1995, before Mugabe’s rule turned bitter, he ministered to 900 Jews.

Today, the community numbers 300, mostly elderly, people. Some 190 Jews live in Harare and 110 in Bulawayo. Many, particularly in Harare, survive on money from abroad. One person saved for four months to pay for a kosher chicken. Silberhaft has since taken responsibility for his welfare.

A few years later, when farm invasions began and many companies relocated across the borders, Mugabe again accused Jews of undermining his country. “The South African Jewish Board of Deputies wrote to him asking why he was singling out Jews and warning against the dangers of antisemitism,” Silberhaft said. They received dismissive a one-line reply.

On the day before Yom Kippur, in 2003, a fire destroyed Bulawayo’s Orthodox synagogue. While everyone agrees the fire was caused by fuel in the synagogue, community members unequivocally deny claims from the government-controlled media that they put it there themselves. There was no real investigation into the fire’s cause.

The community has since relocated to the local Reform synagogue and attracted an Israeli rabbi, David Alima, his wife Efrat and their young family.

“I organized a very moving 75th-birthday bat mitzvah for one Savyon Lodge resident,” said Efrat Alima, referring to the local old-age home. “I intended on making kitkes [challah] but there wasn’t power.” (A bequest has since enabled the purchase of a generator.)

When it comes to electricity and other basic needs, members of the the Jewish community are suffering in much the same way as their compatriots.

Hylton Solomon, a Jewish shop owner in his early 50s in Bulawayo, was arrested last year on charges related to “price fixing.” Mugabe’s government has made it illegal to sell goods at higher prices than those set by the government, and the retail price of Solomon’s pasta was higher than the government-regulated price. “It was a survival tactic for Mugabe,” Solomon said. Mugabe threatened retailers again throughout his election campaign.

Despite the struggles, the remaining community members have cohered around community institutions.

In Bulawayo, Savyon Lodge is a nursing home for 25 retirees. Some of those residents have families abroad, who pay $150 monthly, but running costs are otherwise covered by assistance from foreign charities. Silberhaft, the South African rabbi, organizes regular deliveries.

Things are bad enough in Bulawayo that Jews in the city who don’t live in the old-age home occasionally come to the lodge for basic food and supplies. Still, at least some Zimbabwean Jews have managed to stick around and retain positions of prominence.

Eric Bloch, a chartered accountant in Bulawayo, is a prominent economic analyst with wide connections in political circles. He counts South African President Thabo Mbeki among his personal friends. When we met six weeks ago, he was upbeat about the prospects for change.

“Mugabe wants to stay in power, but his bigger desire is to stay alive with his ill-gotten gains and ego intact. He’s agreed in negotiations with Mbeki that he’ll resign within four months of the election,” Bloch said.

Bloch said that if Mugabe does not resign, he may face arrest and trial at the International Criminal Court.

Other, wearier members of the Harare Jewish community say that Bloch’s predictions have not always panned out. But there are calls for the South African government to arrest prominent Zimbabwean policemen and government officials when they enter South Africa on business or to shop.

Looking forward, a chunk of Zimbabwe’s Jews are intent on keeping their place in the country. One reason is the Matabeleland Zambezi Water Trust, a massive irrigation scheme.

The head of the project, Dumisa Dabengwa, has been in discussions with Israel, which has been recognized globally for its irrigation expertise. Dabengwa, who has visited Israel twice, is a part of the Mugabe government and is now the most vocal supporter of Simba Makoni, a leading presidential candidate in the current election.

“During our liberation struggle we had significant support from the Jewish community. I’d like to bring that back,” he said.

Despite the odds, Solomon sees his role in that future.

“It’s important to keep a Jewish light burning here. Israelis will come for irrigation. South Africans might come to escape crime,” he said. And Silberhaft is preparing to send matzo and other food for Passover.