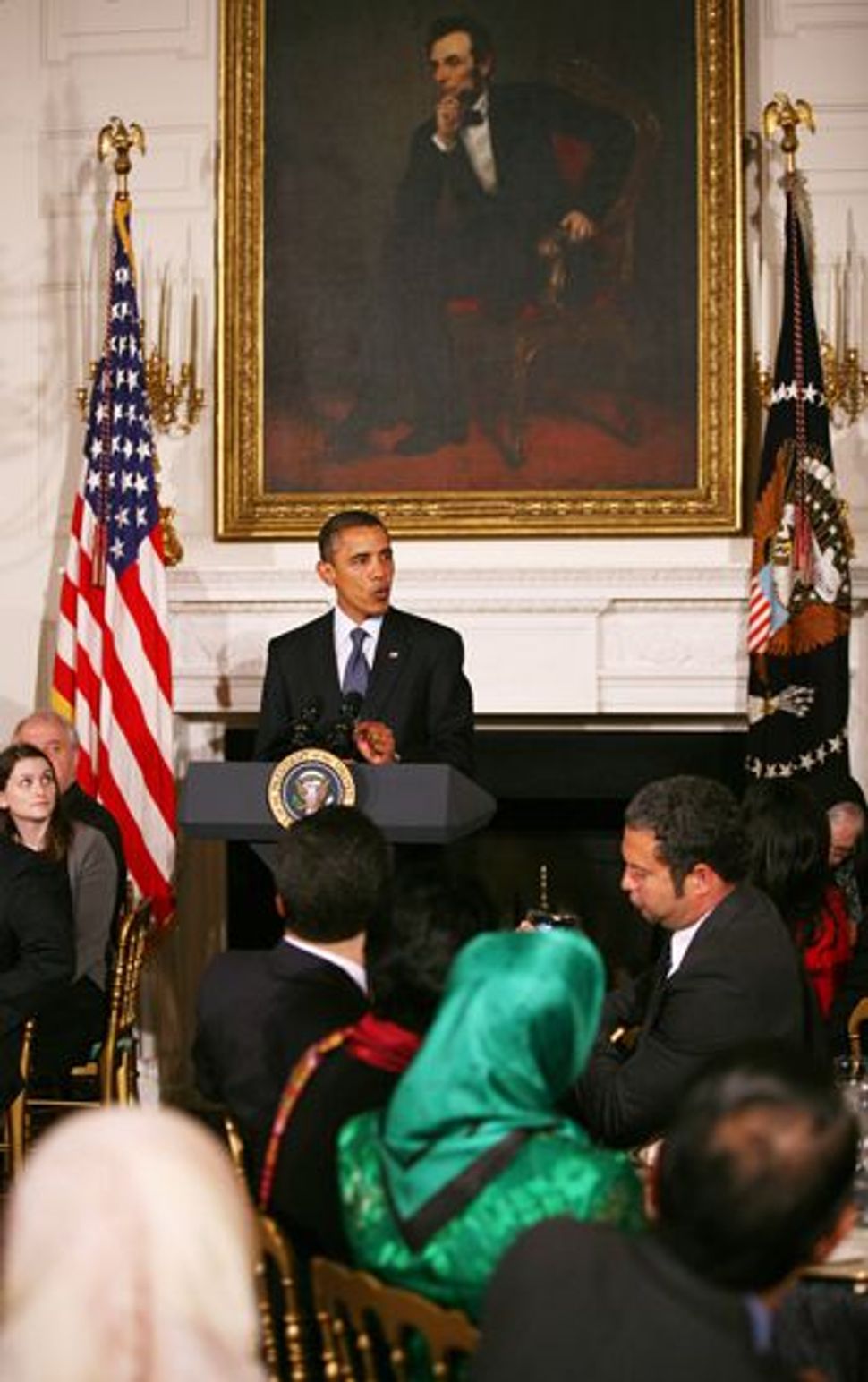 President Obama spoke in support of the mosque at an Iftar dinner held at the White House on August 13. Image by GETTY IMAGES 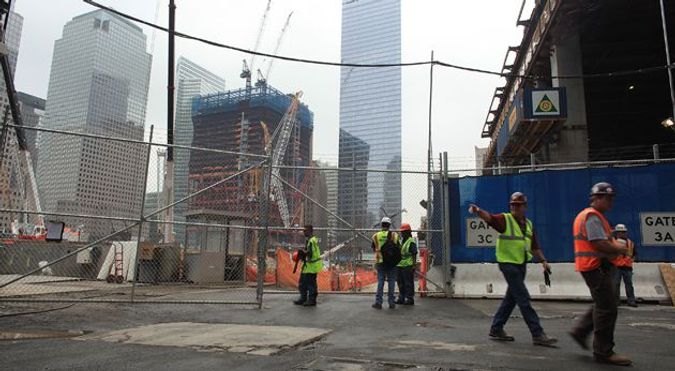 On Site: Above, construction workers at an entrance to the Pit. Image by GETTY IMAGES

On a recent afternoon, a group of puzzled Italian tourists gathered beneath a scaffold at the corner of Greenwich and Liberty streets as a light rain fell over Lower Manhattan.

“We want to find a way just to see Ground Zero and we only have this site, and we were wondering, is there another place with a better point of view to see?” asked Stefania Lamendola, the group’s ad hoc spokeswoman. The tourists were looking at the sprawling Pit through a closed gate, but they couldn’t see much. In fact, Lamendola’s vantage point was one of the best. The trouble is, there’s not much to see.

Which is odd because, as President Obama said when he voiced support for the right of a controversial Islamic cultural center to be built nearby, “Ground Zero is, indeed, hallowed ground.”

In the face of the banality of the everyday commerce and work that surround and fill the Pit, what can such a statement mean? One might think that with all the other examples of hallowed ground carved onto American soil during the past two centuries — the Civil War battlefield of Gettysburg; the Texas School Book Depository, from which President Kennedy was assassinated; the former site of the Alfred P. Murrah Federal Building, target of the Oklahoma City bombing — the nation would have by now made up its mind as to how to observe the sanctity of such a place. But conversations with academics show that the debate is hardly settled.

“The question of where to define [as] sacred ground is still very current for events that occurred a hundred years ago or more,” said Kenneth Foote, a professor of geography at the University of Colorado at Boulder. Disputes continue for generations at places like Gettysburg and Manassas, over boundaries of nearby development and the propriety of commerce near the sites.

Blog posts published in recent days by Talking Points Memo and other websites offered an object lesson in the particular difficulty of drawing sacred boundaries in Lower Manhattan. The posts detail the sacrilege that can be found within two blocks of the Pit: a strip club called New York Dolls; an off-track betting parlor; a couple of fast-food joints, and at least one Irish pub — all as close to Ground Zero as the proposed site of the future Islamic cultural center.

But while these challenges may be particularly acute in New York, they are by no means unique. If Gettysburg, the site of the decisive Union victory and Abraham Lincoln’s famous address, is the pre-eminent example of America’s hallowed ground, it is also an example of the way notions of how best to respect a site’s sacredness can radically change. The first tourists to visit the battlefield observed it from a distance, climbing towers to take in panoramic views of the wooded hills. To actually approach the site would have been inappropriate, said John H. Summers, a visiting scholar at Boston College’s Boisi Center for Religion and American Public Life. “Sniffing around and petting the trees where people died seemed tasteless,” Summers said. Meanwhile, homes and businesses were built nearby. 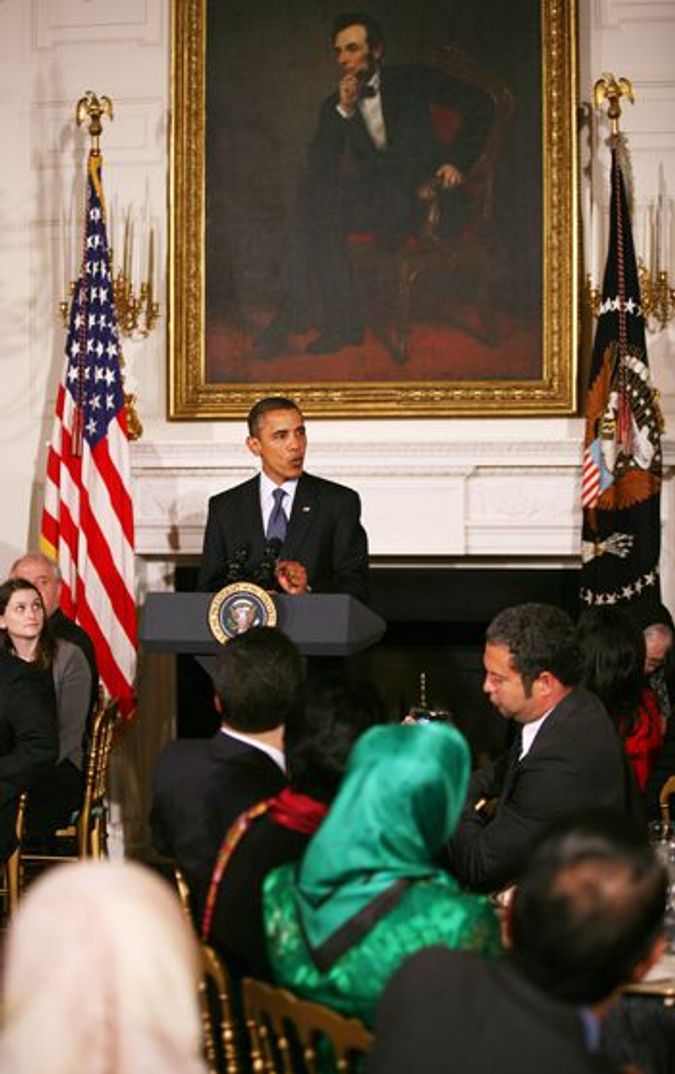 President Obama spoke in support of the mosque at an Iftar dinner held at the White House on August 13. Image by GETTY IMAGES

Over the years, the boundaries shifted. Today, tourists walk freely throughout the site. Meanwhile, the National Park Service, which oversees the battlefield, has undertaken a process of reverting it to its 1863 state, removing trees, developed areas and a 300-foot observation tower built in the 1970s.

Gettysburg and Ground Zero are the sites of very different tragedies, but both are complicated by the fact that some victims’ bodies have never been recovered. The rains that followed the Civil War battle ensured that some of the dead would never be found, just as many families of September 11 victims never received the remains of their loved ones. Those sites, then, are both seen by some as burial grounds, adding a further level of complication.

The sanctification of the site of the 1995 bombing of the Alfred P. Murrah Federal Building by domestic terrorists was, by contrast, relatively straightforward. Just five years after the attack, President Clinton presided over the opening of a memorial site near the former footprint of the building. “People talked about that area as sacred ground, but there were no human remains left,” said Edward T. Linenthal, professor of history and religious studies at Indiana University, and author of the 2003 book “The Unfinished Bombing: Oklahoma City in American Memory.” “It could become memorial ground fairly quickly. It was never seen as a place that people could not walk.”

The process of sanctification, however, usually takes more time. The Texas School Book Depository, where the shot that killed Kennedy was fired, was nearly torn down. “There was a sense that this was a shameful, shocking thing to happen in Dallas,” Foote said. “There was an effort to try and get rid of the book depository, to not mark the events very much in Dallas. And yet now, through time, people see that as a very important site that’s been saved from deconstruction and turned into, I think, quite a powerful reflection on the assassination and its consequences.”

Ground Zero appears to be somewhere in between. “I think people would like to cast it as a heroic moment,” Foote said. But ethical heroes need to have died for a reason, and the reason behind the deaths of the victims of September 11 remains unclear. “That sense of defining the ethical or heroic reason why those deaths occurred is still all in limbo, and it’s even more so now because of the wars, which are just continuing,” Foote said. “What seemed at one point to be a heroic cause has turned into this absolute mire.”

With the meaning of the attacks still up for debate, the project of maintaining the sanctity of Ground Zero seems fraught. The new World Trade Center will eventually include five office buildings — including one tower, which will be the tallest building in the United States — and a variety of retail spaces. Will Ground Zero remain hallowed when the new tenants move in? Will the arbiters of sacredness have a say in what sort of businesses and government agencies rent space there, and what sort of work they do?

Perhaps it’s the challenge of control that fuels the instinct to sanctify. Linenthal says that he thinks of sacred sites as being surrounded by “commemorative membranes” inside of which “only a certain kind of speech and reverential action is possible.” At Ground Zero, Linenthal said, an attempt to sanctify the place is an attempt to mark it as separate in the face of the tumult of the city. “People want to build [a commemorative membrane] because it’s in the center of the busiest place in New York,” he said. “Because it’s there, you have to be extra sensitive to a kind of purity of place.”