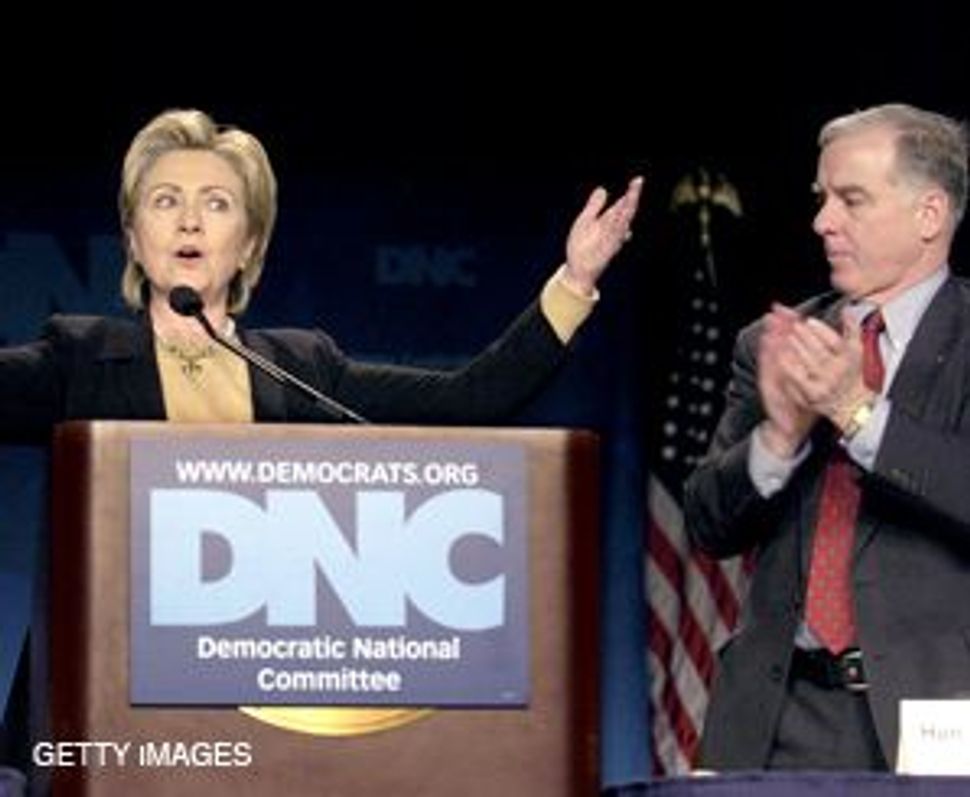 OPEN ARMS: DNC Chairman Howard Dean, seen here with presidential contender Hillary Clinton, ?needs to be slapped around a bit,? according to one prominent Jewish donor.

As Hillary Clinton’s odds of winning the Democratic nomination grow longer, some of her top financial backers are finding themselves divided over whether she should fight on to the convention. 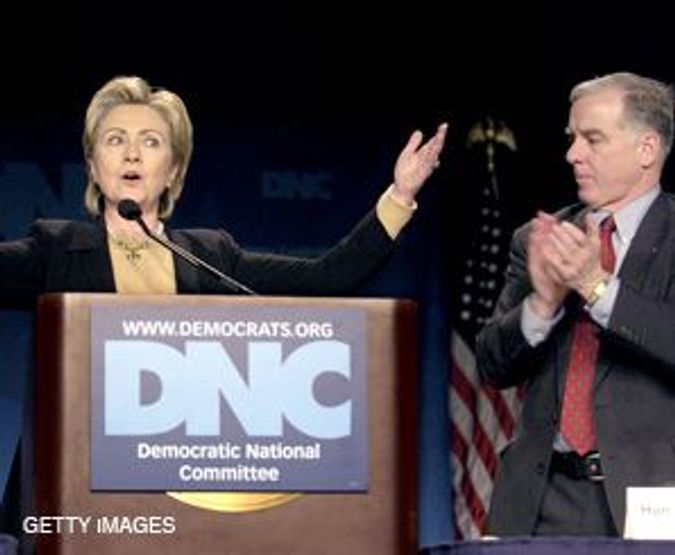 OPEN ARMS: DNC Chairman Howard Dean, seen here with presidential contender Hillary Clinton, ?needs to be slapped around a bit,? according to one prominent Jewish donor.

In interviews with the Forward this week, nearly a dozen Clinton supporters displayed a variety of opinions and emotions about the campaign, ranging from concern over the impact of a prolonged primary battle on the party’s chances in November to a steely determination to see Clinton press on through the summer. One of her supporters, who is also a major donor to the party, said he is furious at the Democratic National Committee because of the impasse over delegates from Florida and Michigan — and may express his frustration by keeping his wallet closed come the general election.

“Chairman Howard Dean needs to be slapped around a little bit,” said Stephen Cloobeck, a Las Vegas real estate entrepreneur who estimates that he has given more than $500,000 to Democratic organizations and candidates. “A lot of high net worth individuals, high end donors, are absolutely disgusted. If we ran our businesses like this, we’d have big problems.”

The sharp words in defense of Clinton come as the New York senator faces increasingly slim odds in prevailing over her rival, Senator Barack Obama of Illinois, who currently leads in states and delegates won, as well as the popular vote. Perhaps reflecting the changing dynamics of the contest, a new Gallup Poll has found that the two candidates are now overall neck and neck among Jewish Democrats, who just several months ago showed a marked preference for Clinton. Even more significantly, the views of a cadre of campaign donors will remain vital because these supporters could influence whether or not Clinton fights on through the August convention. If angered, this vital Democratic constituency could shut off the flow of funds to the alphabet soup of party organizations that raise money for state and local races.

Lonnie Kaplan, a major fundraiser for Clinton in New Jersey who is also a former president of the American Israel Public Affairs Committee, said he was angered over the decision not to hold new elections to replace the contested primaries in Florida and Michigan, and that he would be “very upset” if delegates from those states are not seated at the convention in August.

“It’s like giving the death penalty for a speeding ticket,” Kaplan told the Forward, adding that should Clinton fail to win the nomination, his support for Obama over presumptive Republican nominee Senator John McCain would not be a given.

Several other Clinton backers — including, most notably, former DNC chairman Steve Grossman — credited Dean for doing his best to resolve the conflict over delegates in an even-handed manner, and said they were not angry at party leaders, but nonetheless believed that the New York senator should make her case to nearly 800 super-delegates at the August convention, even if, after all primaries are complete, she trails Obama in the popular vote and delegates.

“It would not be right for Clinton to stop or be asked to stop. That’s why we have a convention,” said Mark Aronchick, a Philadelphia-based lawyer who serves as a co-chair of Clinton’s Pennsylvania campaign and who has participated in a number of discussions with DNC leaders about the Michigan and Florida delegates. “Who’s afraid of spirited discussions and debates?”

But such bluster, however genuinely felt, is showing signs of cracks even among Clinton loyalists. One major donor, who did not want to be named for fear of alienating the New York senator, said he and many other Clinton supporters were beginning to worry that if a bitter primary extends through the summer, the party may “confront the reality that we’re going to wind up with another extension of the Bush administration.” The donor said he favored rallying behind one nominee or the other in “the middle of June at the latest.”

Michael Adler, a Miami-based businessman who was an early supporter of Bill Clinton in 1992, said he believed the party should follow the example of King Solomon by “splitting the baby” — in this case, delegates from his state — “in half.” While he said he believed in seating the delegates from those two states at the party’s convention, Adler suggested apportioning in a way that would not unduly benefit one candidate or the other: assigning one half of the delegates based on the vote tally from the Florida primary, which Clinton won handily, and assigning the other half based on the final tally of delegates across the country, which Obama now leads.

But asked about the possibility that fellow Clinton backers might contribute to the creation of a stalemate that lasts well into the summer, Alder said he was not overly concerned.

“Even though I’m active for Hillary, there will be a time when I would call upon Hillary and I would call upon Obama to find a solution,” Adler said. “But as a businessman, I know deals get cut and you resolve the issues not earlier than they have to be, because why should you prematurely make decisions.”