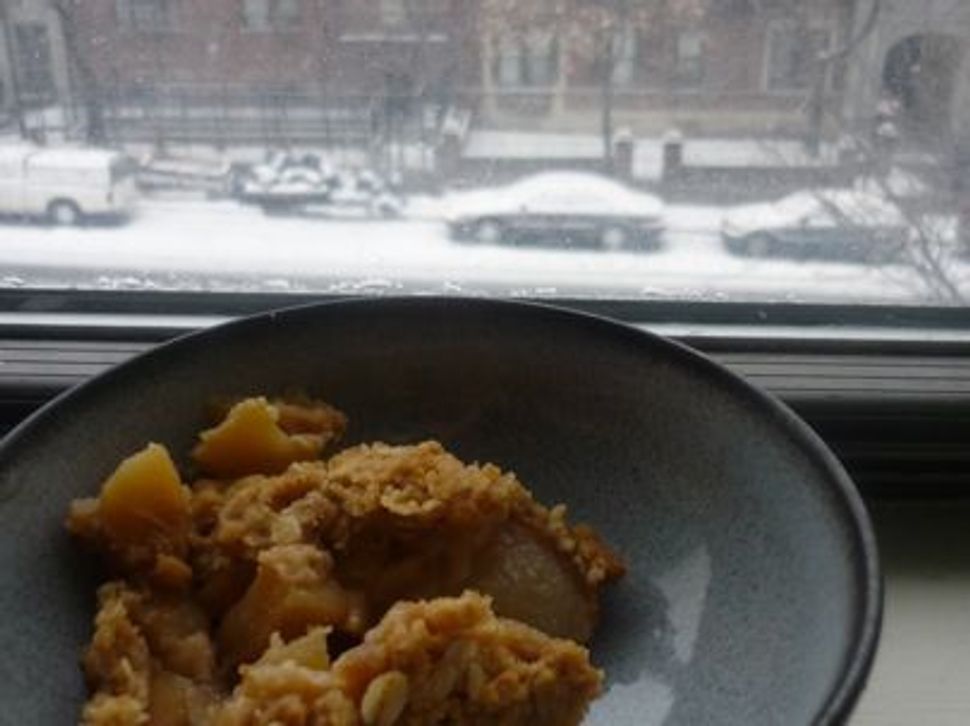 According to Raymond Sokolov’s book, Why We Eat What We Eat, “Before Columbus, there were no apples in the Americas. Settlers brought seeds and grafts, hoping to recreate their old way of life.” Any American who has ever given a teacher an apple (or seen a movie where such an exchange occurred), uttered the words, “an apple a day…” or traversed the produce section of a grocery store or farmers’ market knows that those early settlers succeeded, big time. It’s a good thing too, because, as the apple wove its way into American life and culture, delicious things occurred – like the apple crisp.

Homemade apple crisps arguably rank among the humblest desserts on the planet, containing nothing more than fruit, fat, sugar, and flour. I like that in a sweet. With a crisp, there is no need for the bells and whistles of a layered trifle. They don’t require batter to be scooped evenly onto baking sheets like a cookie and, unlike making crème brulee, there’s definitely no blow torch necessary. It is undoubtedly the crisp’s heimish (Yiddish for “homey” or “comfortable”) nature that makes it a Shabbat dinner favorite, served either as a dessert or during the meal as an alternative to kugel.

That said, because of their simplicity, people sometimes classify crisps as a bit boring – like the cousin you invite over to eat out of obligation, rather than his or her sparkling wit and dinner conversation. But gussied up with just a touch of crystallized ginger and a scoop of freshly whipped cream, the apple crisp holds its own at any table.

Apple and Pear Crisp This recipe adds a touch of sweet pear to winter’s favorite apple crisp. Oddly enough, the morning after I made this warm, cozy dish, it started snowing – and a snowy day just happens to be the best kind of day for apple crisp. Coincidence, or culinary conjuring?

*The Joy of Cooking says that, according to the British, adding oats to a crisp topping renders it a “crumble.” But why would you want to crumble?

Preheat your oven to 350 degrees F.

Gently mix the apple and pear pieces in a bowl and evenly distribute them in a round, 8-inch ceramic or glass pie dish. Set aside.

Mix the flour, salt, sugar, cinnamon, ground ginger, oats and (if using) crystallized ginger pieces in a medium-sized bowl. Add the butter and, using a pastry cutter or your fingers, incorporate the butter until the mixture roughly resembles cornmeal. Spread the topping evenly over the apple and pear and put the crumble in the oven. Cook until the fruit is bubbly and fragrant and the topping is very lightly browned and, well, crisp.

Here, my crisp stares dreamily outside, wondering what its snow angel would look like.