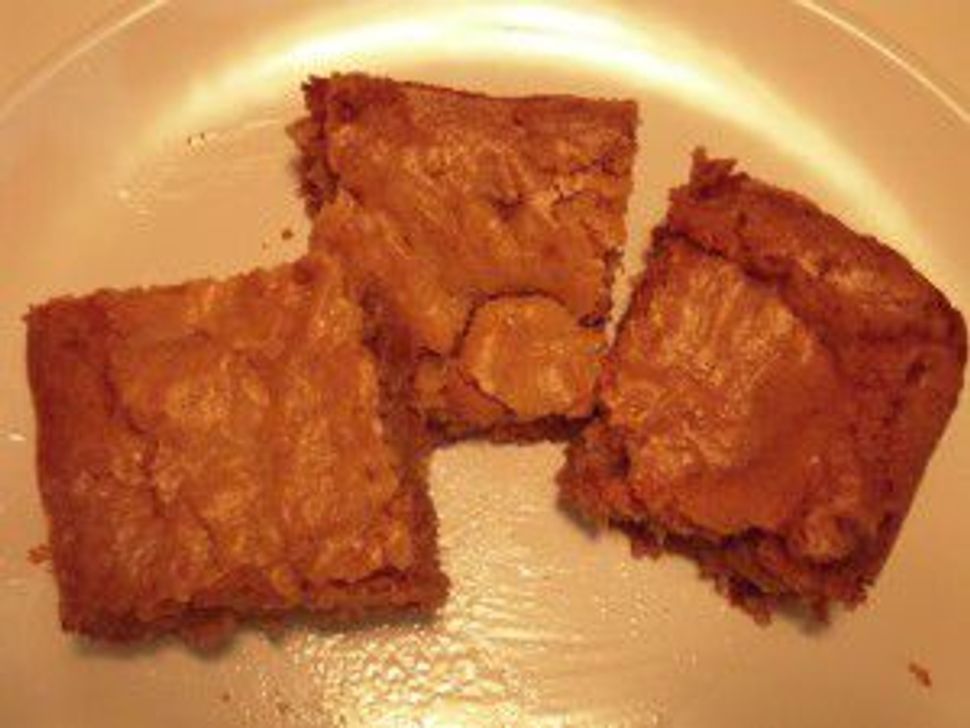 I’m in the minority as far as Jews go in that I’m blonde. There are increasing number of blonde Jews but we’re still few and far between. I was president of my Jewish sorority in college so my picture was smack in the middle of our composite photo. Not only was I front and center but I stuck out like a sore thumb as one of three or four blondes out of over 100 women on the composite. In any case, I’ve always embraced being blonde so when I was deciding what to bake recently blondies came to mind immediately. I am a huge fan of chewy brownies but there’s something about blondies that make them even better than brownies, at least in my opinion.

I located a recipe on one of my favorite cooking blogs and after reading the recipe I realized what makes blondies so fantastic (beyond the hair color connection, of course): brown sugar! Blondies are chewy and have a bit of a molasses flavor since they made using only brown sugar and no white sugar.

For those of you who are unfamiliar with blondies, they are sort of like a chocolate chip cookie in a bar form – but so much better. There are a few reasons that blondies will be my quick and easy dessert of choice moving forward: they are versitile, easy to make without fancy kitchen electrics, and keep well in an airtight container for a few days.

Since these blondies keep well they would be great to serve at a dairy Shabbat lunch or just to make in advance for a small group of friends. Please share your variations!

Preheat the oven to 350°F. Melt the butter in a microwave safe bowl (you can use a double boiler but this is quicker) Lightly butter an 8X8 pan. Whisk together the melted butter and sugar in a bowl.

Test the mixture to make sure it isn’t too warm for the egg. Add the egg and vanilla extract and whisk.

Add the flour, baking soda, baking powder, and salt, mix it all together. Add the Heath Toffee Bits or other mix-ins.

Pour into the pan and spread evenly. Bake for 20-25 minutes or until a toothpick comes out clean. If you don’t have a toothpick handy you can use a fork or knife. Allow to cool. Cut into squares and serve.

Makes between 9 and 12 blondies.