Clinton’s Ally in Pa. Talks Off the Cuff, But Doesn’t Wear Identity on Sleeve 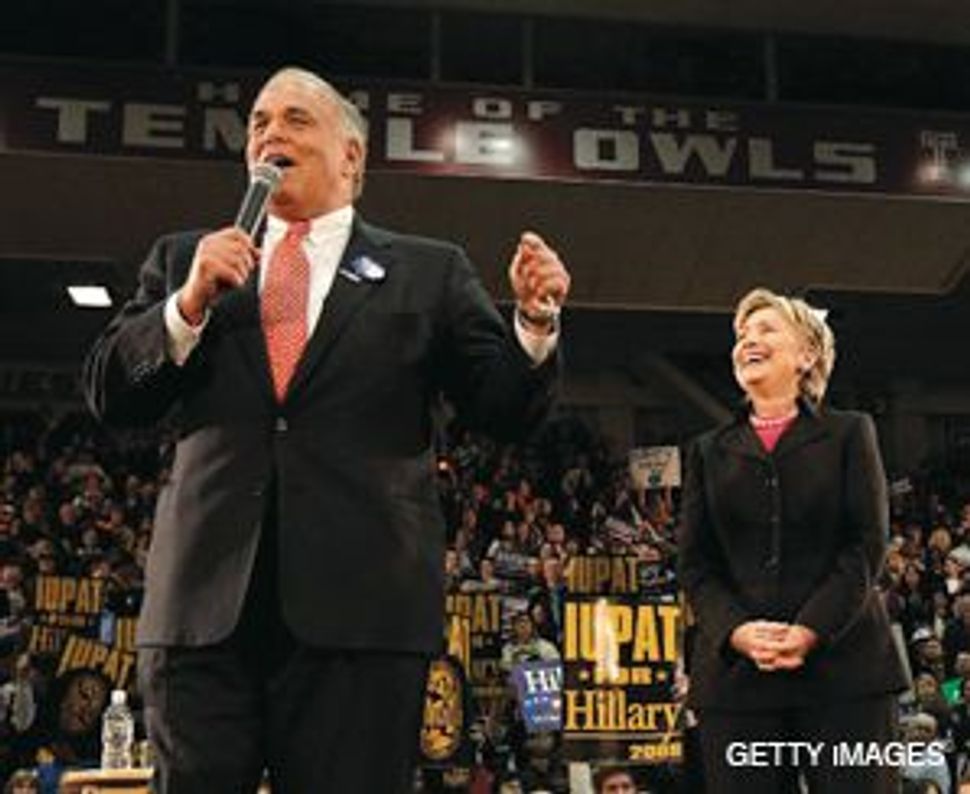 Pennsylvania Governor Ed Rendell has grabbed headlines in recent weeks as a staunch, if unscripted, supporter of Hillary Clinton. But just a decade ago, he found himself thrust into a critical media spotlight by what today might best be described as a Barack Obama moment. 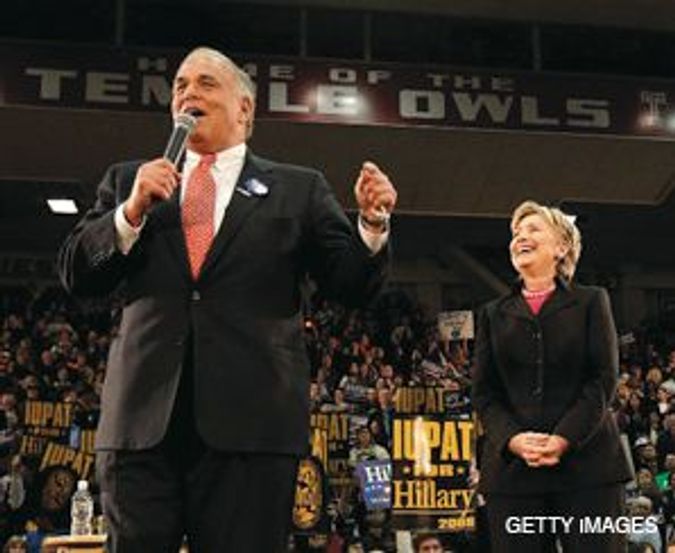 In the spring of 1997, Rendell, one of the country’s most successful Jewish politicians, invited Louis Farrakhan, the Nation of Islam leader long denounced for his history of antisemitic rhetoric, to share the dais at a rally promoting racial reconciliation. Rendell, then the overwhelmingly popular mayor of Philadelphia, was responding to two high-profile, violent racial incidents and said he was working to pre-empt a potentially explosive march planned by the Nation of Islam. When he quickly came under attack by Jewish organizations protesting the event, Rendell not only held his ground but hit back, calling the outcry by “so-called” Jewish leaders “ridiculous” and accusing them of standing in the way of necessary dialogue.

These days, Rendell is drawing considerable notice both for his muscular advocacy in support of Clinton’s presidential bid and for continued evidence of his maverick streak. Fighting hard to build support in Pennsylvania, which will hold a crucial presidential primary on April 22, Rendell is a prodigious fundraiser who has helped Clinton pull in more than $3 million statewide — more than Obama, as well as any other Democratic primary candidate in state history. In recent weeks Rendell has emerged as a tireless defender of Clinton in the media, as well as a leading advocate within the party for holding new primary elections in Florida and Michigan.

At the same time, the famously loquacious governor has displayed his long noted tendency to speak his mind and go off-script, as when he raised hackles in February by questioning whether Obama, as an African American, could win the support of his state’s “conservative whites,” a comment that was similar to a 2000 gaffe in which Rendell questioned the effect of having a Jew on the Democratic presidential ticket.

Himself a liberal Democrat who was not backed by the state party in his 2002 gubernatorial primary due to concerns about his statewide viability, Rendell is well-known within the Keystone state for his populist image — he’s a rabid sports fan who regularly appears on post game television coverage for the Philadelphia Eagles — but not as an overtly Jewish figure. His wife, federal judge Marjorie Rendell, is Catholic and the couple sent their son Jesse, now grown, to a Quaker day school.

“He doesn’t back away from being Jewish, but he’s never projected that as a major part of his identity,” said Theodore Hershberg, a professor of public policy and history at the University of Pennsylvania.

Whatever his broader public persona, Rendell has deep roots in the Jewish community, and a longstanding coterie of influential Jewish friends and supporters who he is now rallying in support of Clinton. Raised in heavily Jewish Riverdale, N.Y. by the children of Jewish immigrants from Russia — Rendell’s father, Jesse, was a relatively unobservant Jews active in liberal causes — the future Pennsylvania governor attended the University of Pennsylvania, where he was a member of the heavily Jewish fraternity, through which he has formed a network of lifelong friends.

“When I was a young kid at Penn, I knew him as a mythic figure from Pi Lambda Phi and the Penn campus,” said Mark Aronchick, 58, a co-chair of Clinton’s campaign in Pennsylvania, who was among a network of fraternity brothers that backed Rendell’s first political run, for Philadelphia district attorney in 1982. Aronchick, a lawyer who served as the Philadelphia city attorney when Rendell was D.A., took Rendell on a trip to visit Jewish refuseniks in the Soviet Union in 1985 — during which, he said, Rendell teared up over the plight of a Jewish acquaintance jailed by the KGB and insisted on having a petition drawn up and sent to Soviet officials.

Reaching across the political aisle, Rendell is also friendly with Republican Senator Arlen Specter, who hired Rendell as an assistant district attorney during his own tenure as the Philadelphia district attorney. Today, Rendell and Specter, who is one of 13 Jewish members of the Senate, live two blocks from each other in East Fall, a neighborhood in the northwest section of the city.

“As far as Judaism is concerned, the governor is not very religious, and he goes rarely to synagogue, but he’s very proud of his heritage,” said Rabbi Solomon Isaacson, the Hasidic rabbi of the heavily Russian Congregation Beth Solomon. Isaacson would know, since he is one of Rendell’s oldest — and at first glance, unlikeliest — friends.

A self-fashioned Philadelphia player who has for decades delivered hundreds of challahs to elected officials each Friday afternoon, Isaacson, 64, said he was first introduced to Rendell by his local committeeman when the governor was running for D.A in the early 1980s. Over the years, Isaacson has been a consistent supporter at Rendell’s campaign events, while the governor — much to the consternation of some in the more mainstream Jewish community — has attended Yom Kippur services in Isaacson’s synagogue, and been a consistent headliner at its annual fundraising dinners, where he has offered up events like “lunch with the governor” or “baseball game with the governor” as items for auction. According to Isaacson, the sanctuary of the synagogue, which opened in a new building in 2000, is named after Rendell’s mother, Emma Sloat Rendell.

An article that appeared that year in a local paper, the Northeast Times, cited Isaacson saying that the sanctuary naming was a thank-you to Rendell for his help in securing the free construction work from the city’s unions. Asked about it this week by the Forward, Isaacson said that the synagogue had spent about $700,000 on the building and that a number of unions had finished the job for free, putting in at least $500,000 of work. But Isaacson asserted that while the unions knew of his connection to Rendell, they were not solicited directly by Rendell, according to his knowledge.

“The unions were very, very nice,” Isaacson said. “We ran out of money and they did most of the construction for free.”

Rendell’s office did not rspond to a request for comment before press time.

Beyond Rendell’s web of personal relationships, some believe that whatever identity he has as a Jewish politician is most evident in his embrace of a philosophy shaped by the New Deal.

Temple University political science professor Joseph McLaughlin said the imprints of Rendell’s background are stamped on his policies, which have included support for increased government spending, heavy investments in education, support for universal health care in Pennsylvania and investments in wind energy.

“He talks about Franklin Delano Roosevelt as someone who had a huge impact on his family and someone he regards as one of the great presidents,” said McLaughlin, who served as a senior adviser to Rendell in 2004.

Clinton’s Ally in Pa. Talks Off the Cuff, But Doesn’t Wear Identity on Sleeve