An Unlikely Place To Pray 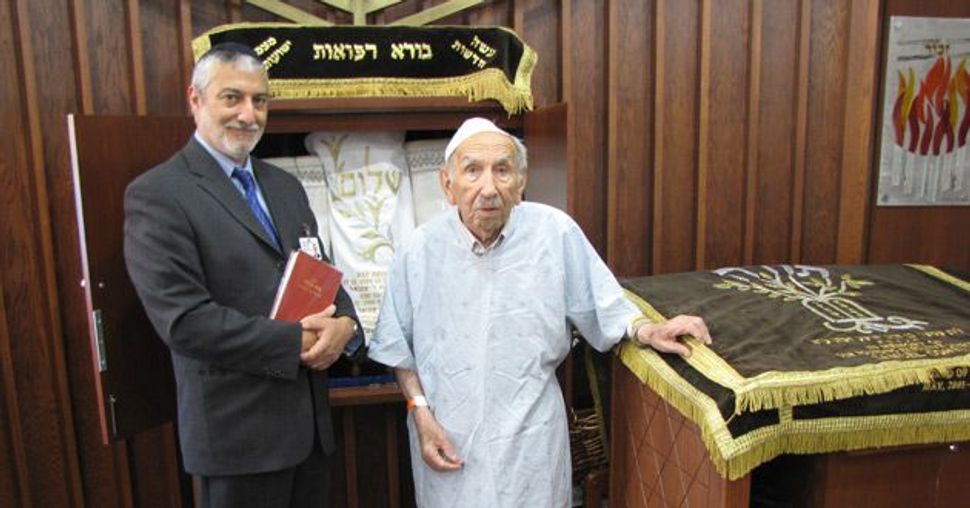 It’s a synagogue that opens its doors but once a year.

Here, at Montreal’s Jewish General Hospital, a sunlit space used for medical seminars on mending the body is transformed — for three days, at Rosh Hashanah and Yom Kippur — into a sanctuary to comfort the soul.

In this congregation — a mix of neighborhood locals, patients, family members and staff — it is not unusual to see a tallit draped over a blue johnny gown, or intravenous poles hobbling alongside worshippers in wheelchairs. Across the mechitzah, the ritual divider separating the sexes, women in fleece robes or street clothes nod “Good yom tov” to one another, helping new arrivals locate places in their prayer books before turning back to their own.

This kavana — meaning, or intent — shifts the center of gravity: a doctor pushing a wheelchair up the bimah ramp so that its elderly occupant can have an aliyah to the Torah; a young woman tenderly wiping her grandfather’s mouth, reminding the man with his eyes closed, “Zayde, look, they’re about to blow the shofar”; worshippers stepping forward to make Misheberach, the blessing for the sick, for “Harry on the sixth floor,” or “Chana on 7 East,” confident that God will know just where to find them.

In this age of variety-pack Judaism, when one can choose from no-frills minyans in storefronts or big-box synagogues with turbo-charged cantors, the best High Holy Day prayer I have found is, of all places, in a hospital.

So it has been the last six years, since my husband first broached the idea of attending services at the 637-bed university teaching hospital whose staff he’d just joined.

His suggestion was met with less than enthusiasm. The prospect of going to a hospital for yom tov seemed like a downer. Not to mention that the walk there and back was a good hour each way, with a chunk uphill. And what if it rained?

But at that point, we were missing more than just a backup plan for bad weather. While religiously observant, we didn’t belong to a synagogue. Too religious for some, insufficiently so for others, we’d bounced around, but never clicked anywhere.

Maybe this would be different. After all, what better place than a hospital to catch Hashem’s ear for a healthy, good year?

I was overwhelmed from the moment I stepped into the hospital’s airy auditorium. This is davening as it is meant to be: heartfelt, quiet, hopeful — if not for one’s own welfare, then for that of a patient upstairs.

I’ve sat with people whose time is short, with some who would go home soon and with grown children who’d join after a long night at a parent’s bedside. The worshippers come and go, but whether they stay 10 minutes or several hours, whether to daven along with the cantor or just to sit and decompress, is quite beside the point.

Because here, people can find what they need when they would rather be elsewhere: the company of others in a yom tov atmosphere, some quiet time to ask for divine compassion and, for men, an aliyah or similar honors.

At this special time of year, when we’re all clamoring to make amends, from where I’ll be standing, maybe I’ve got a bit of a head start.

Dorothy Lipovenko is a writer living in Montreal.

An Unlikely Place To Pray