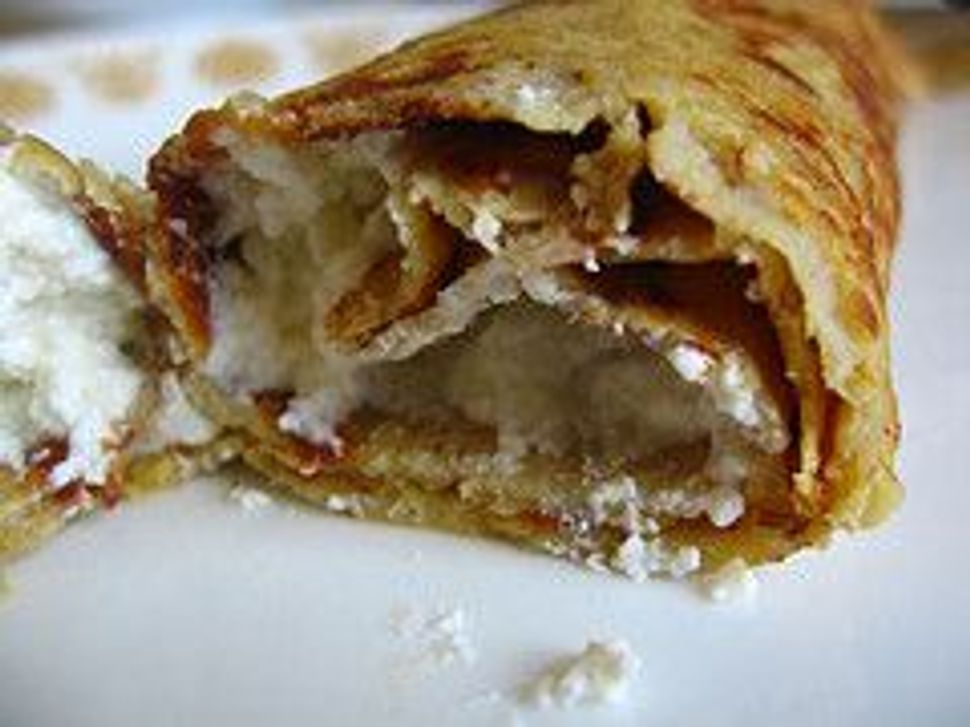 Culinary Jew, Bagel and Lox Jew – these are the terms most often used to describe members of the tribe who relate to Jewish life primarily through their stomachs. These foodie Jews connect to their heritage through babka and matzah ball soup, and are likely to feel equally “Jewish” at the kiddush table as in a minyan. Being something of a culinary Jew myself, I tend to find myself at events centered around creating and eating Jewish foods (Shabbat meals, of course – but also a latke parties, hamentashen parties…).

Last night was no exception, when my friend Avi invited a group of friends over for a Shavuot blintz-making party.

The wine flowed as we poured and swirled blintz-batter (which resembles a thin pancake batter) in pans to make the “leaves,” filled and rolled the blintzes, and pan fried them in Earth Balance and ghee. Dairy-heavy foods like cheese-filled blintzes are traditional staples on Shavuot, but our lactose-intolerant host forced us to get creative. Our blintz menu included: sweet potato, cinnamon-infused butternut squash, freshly-made pesto, regular potato, and a silken tofu mixture, sweetened with sugar and tiny dried blueberries.

The pans were going for 2 solid hours, and plates of just-fried blintzes were passed around for communal tastings. One guest managed to sneak in a small container of sour cream, but the majority of guests smeared cherry jam, ginger preserves, and chocolate hazelnut spread on top of their crispy blintzes. It felt to me, all this swirling and frying, this tasting and oohing and ahhing, like an important moment. There we were, a bunch of Jews (and a few curious non-Jewish friends) – many of whom had never made a blintz before – sharing in a taste of Ashkenazi heritage, but updating the tradition with a decidedly contemporary twist.

Most of the Jews at this blintz-making party were not limited to a gustatory relationship to Judaism. Between blissed-out bites, guests chatted about the all-night Shavuot study sessions they’d attended the night before, or where theyhad davenned that morning. But for the moment we were brought together by the blintzes, bound by the sweetness of dough and the sense of belonging to something bigger than ourselves.

Here’s a great recipe for cheese blintzes (feel free to experiment with different fillings) from Gourmet.

For a more in-depth examination of Culinary Jews, read my article in Zeek Journal: Goldbergers and Cheeseburgers: Food and Particularism among American Jews.