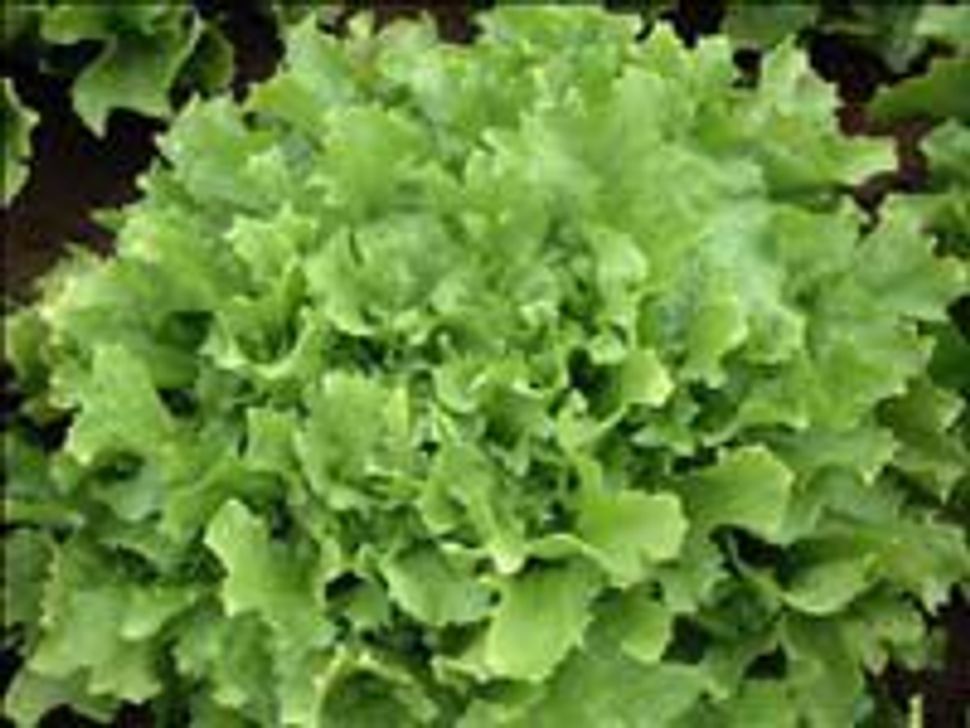 From the Associated Press:

For years, horseradish has enjoyed a place of privilege at the seder, the carb- and symbolism-heavy meal that celebrates Passover.

Along with its counterparts on the Passover plate, horseradish helps tell the story of the Jews’ liberation from Egyptian slavery and exodus into the desert: Unleavened, cracker-like matzoh recalls the bread the Israelites hastily made prior to fleeing into the desert. Salt water, in which parsley and eggs are dipped, symbolizes the tears slaves shed.

And horseradish generally is used to represent the bitterness of slavery.

But this year, consider adding color to the plate (and giving a nod to tradition) by substituting bitter greens — such as chicory, endive, arugula, and dandelion and mustard greens — for the horseradish.

Bitter greens have always been a common component in seders of the Middle East, says Joan Nathan, author of numerous Jewish cookbooks, including ‘‘The Jewish Holiday Cookbook.’’

For some Jews this changed as they moved into Eastern Europe, where bitter greens weren’t available in early spring, she says.

Of course, Sephardic Jews — who come primarily from North Africa, Southern Europe and the Middle East — never made the switch. But most American Jews are Ashkenazi, or of Eastern European descent, and so the horseradish came with them.

This is changing, in part because bitter greens have become a darling of gourmets regardless of faith and are showing up on restaurant menus and in the produce sections of mainstream grocers.

‘‘What’s nice nowadays is when you go to buy ready-to-eat salad greens, you actually see (a variety of greens) as options,’’ says Cynthia Sass, a spokeswoman for the American Dietetic Association.

‘‘It used to be just iceberg lettuce and romaine,’’ she says. ‘‘Then slowly spinach was added. Now you see field greens, baby greens, arugula. Things you would only see in health food stores or gourmet specialty markets, now you see at mainstream supermarkets.’’

Sarah Kagan, food editor at Epicurious.com (the online site for Gourmet and Bon Appetit magazines), said that in recent years the Sephardic recipes have been among the site’s most popular Passover fare.

‘‘There’s a high level of interest in nontraditional recipes outside the norm of typical Ashkenazi cooking,’’ she says, noting that last year Bon Appetit featured a Sephardic menu for Passover and this year Epicurious is showcasing an Israeli menu.

Rabbi Elie Abadie, dean of the Jacob E. Safra Institute of Sephardic Studies at Yeshiva University in New York, says most Sephardic Jews living in the West now use escarole and endive for their seders.

Those greens often are tempered with romaine lettuce ‘‘to make it a little more palatable and yet still taste the bitterness,’’ he says.

Cooking also tempers most bitter greens, though they still will have bite. They also add a nutritional kick to seders. Sass says greens are low in calories and are good sources of Vitamin A, folate and dietary fiber. Many also are rich in Vitamin K and Vitamin C.

At the seder, Jews traditionally eat the bitter greens in a ‘‘Hillel sandwich’’ with matzoh and charoset, a sweet fruit-and-wine mixture that symbolizes the mortar used to make bricks in the days of Egyptian slavery.

For a modern take, a bitter green salad with roasted pears achieves the same effect on the palate: bitterness tempered by sweet fruit.

Set the oven rack in middle position and preheat oven to 425? F.

Place the pears in a zip-close plastic bag and add the oil. Toss to coat, then arrange the pears in a single layer on a rimmed baking sheet. Season with salt and pepper.

Roast pears, flipping twice, until they are tender and beginning to brown, about 20 to 30 minutes. Cool about 15 minutes.

In a large bowl, toss the greens. Set aside.

To make the dressing, in a small bowl whisk together the shallot, vinegar, honey, salt and pepper. In a slow stream, while whisking, add oil. Continue whisking until emulsified.

Just before serving, add the roasted pears to the greens, then drizzle with dressing and toss to coat.

Much of this salad can be prepared in advance. The greens can be washed and dried a day ahead, then chilled, wrapped in paper towels in a sealed plastic bag. The pears can be roasted four hours ahead and kept at room temperature.