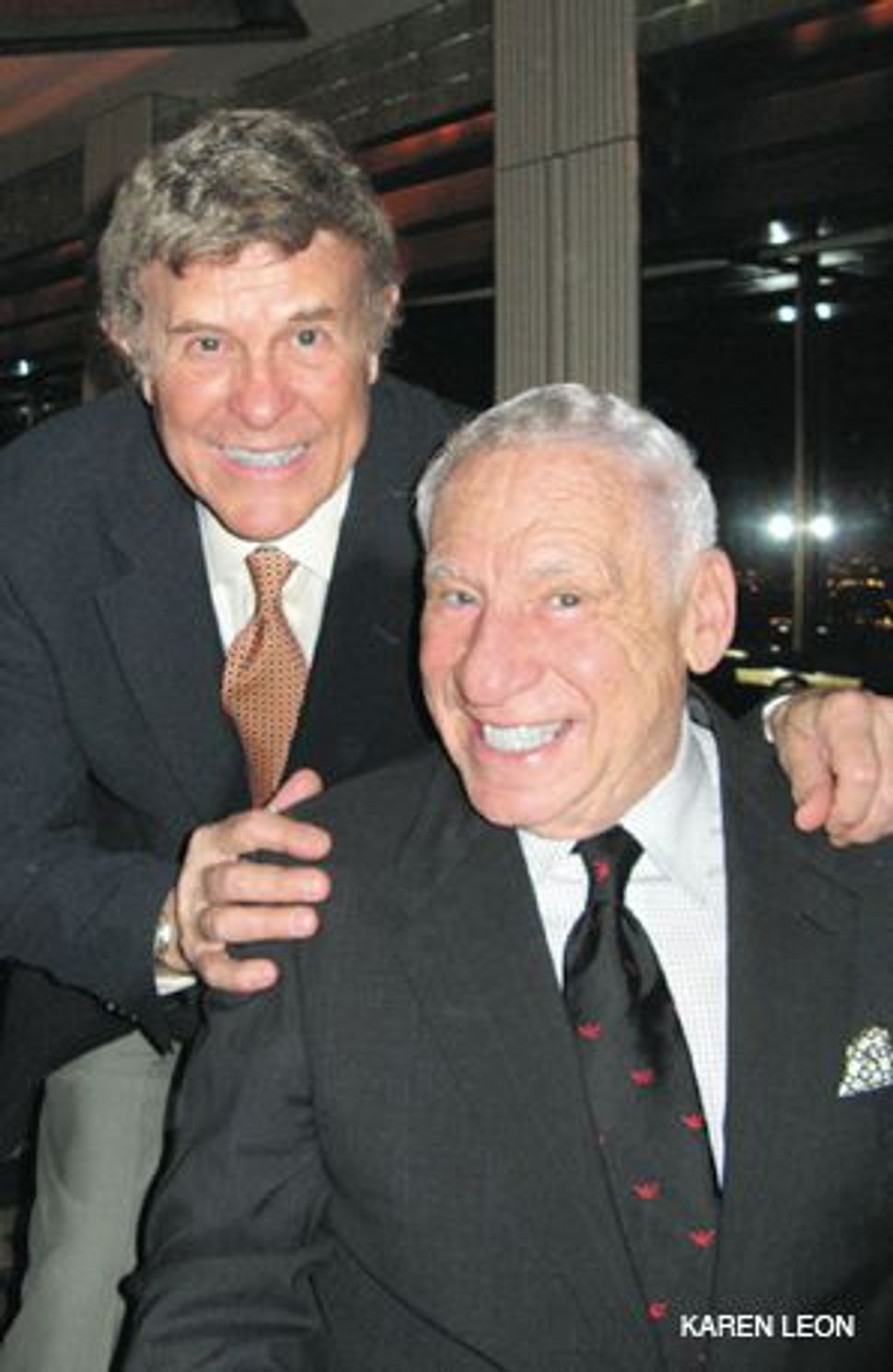 Legends: Cousin Brucie and Mel Brooks were at the event. 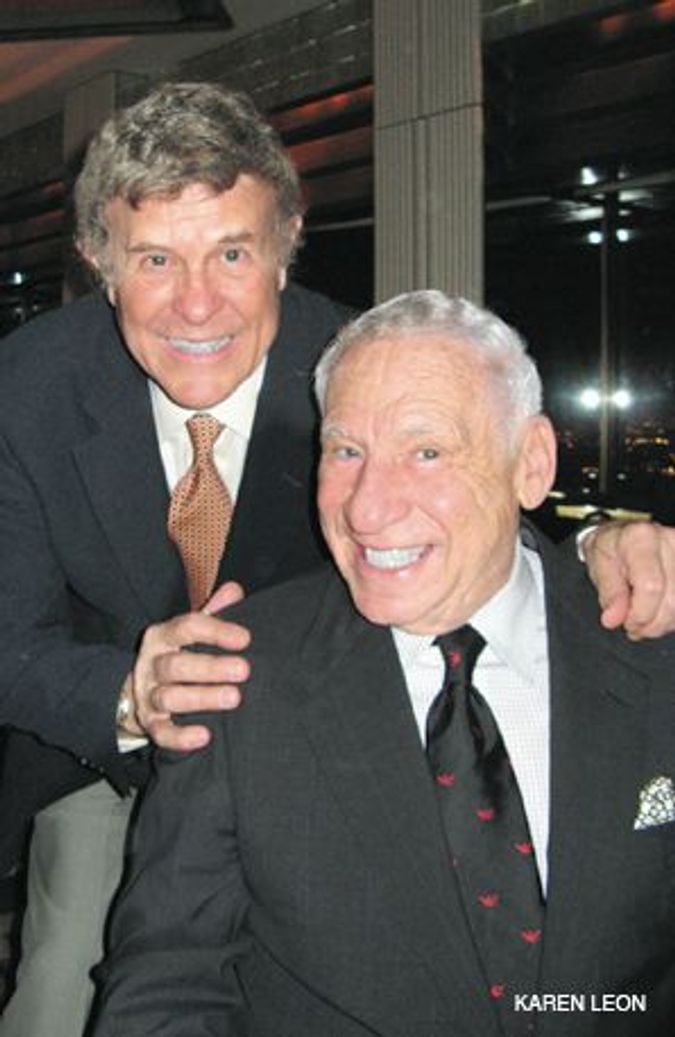 Legends: Cousin Brucie and Mel Brooks were at the event.

Though the Forward is completing its 110th anniversary, Mel Brooks, the authenticated “2000 Year Old Man,” told me he grew up reading it as a youngster. Brooks, an honoree at the Guild Hall Academy of the Arts’ March 3 Achievement Awards gala at the Rainbow Room, recalled: “On Friday nights my mother put the Forward down carefully on the linoleum floor, and komandevet [ordered] me and my three brothers: ‘You bandits don’t tear it! It’s Jewish writing!” Bruce Morrow (aka Cousin Brucie), our reception tablemate, piped in: “For my grandparents, the Forward was their bible. It helped them survive.” Then he asked me, “So why didn’t I know the Forward was now in English?” Upon accepting his award for performing arts, Brooks (whose roster of satiric hits includes “Young Frankenstein” “The Producers” and “Blazing Saddles”) reminisced about his work with Carl Reiner on the 1960s mega-hit album “The 2000 Year Old Man.” The two created it following Brooks’s painful surgery for gout, which made him feel like a “2000 year old man…. Carl said ‘2000 years — can you prove that? Do you have a birth certificate?’ I said, ‘Yea, I have a birth certificate, October 16 negative 2000.’ ‘Can I see it?’ ‘I don’t carry it on me.’ Back then, when they gave you a birth certificate it was on a boulder.’”

Guild Hall’s other honorees were playwright, poet and novelist Joe Pintauro, contemporary artist David Salle and Robert F.X. Sillerman, chairman and CEO of CKX, Inc. Sillerman’s acquisitions include “American Idol” and the trademark rights to Elvis Presley and the operation of Graceland. Actively involved in the Paley Center (formerly the Museum of Television and Radio), Sillerman’s largesse extends to Brandeis University, where he established the Sillerman Center for the Advancement of Philanthropy.

Guild Hall, located in East Hampton, N.Y., is the first center in the United States to provide a museum, theater and community meeting place under one roof and has, since 1931, been a home for the local artistic community. Since 1985, when the awards were established, the roster of Pulitzer, Oscar, Tony, Emmy and National Book Awards honorees includes Kurt Vonnegut, Betty Friedan, Alan Alda, E.L. Doctorow, Sidney Lumet, Itzhak Perlman, Lukas Foss, Lauren Bacall, Sheldon Harnick, Morton Zuckerman and Bud Schulberg.

During our chat, I asked Brooks what he thought of a Yiddish presentation of his current Broadway production version of “Young Frankenstein,” possibly by the National Yiddish Theatre Folksbiene. He replied: “You already have ‘The Golem.’” (I am not sure if he was referring to Yiddish poet H. Leivik’s poem/play “Der Goylem”, based on the legend of the mechanical man made from clay by a rabbi in 17th-century Prague to defend the Jews from blood libels.) “What I had in mind,” I told Brooks, was “Der Pisherke Franksteinstein — an affectionate Yiddish reference to a youngster whose brain is in the process of becoming.”

“THE MARRIAGE CONTRACT,” A COMEDY WITH SONG AND A FOLKSBIENE HIT

“That I’d be introducing a Hebrew play by Ephraim Kishon in Yiddish [translation by Israel Beker], you’d know that I’m from Frankfurt am Main,” quipped Ruth Westheimeras she addressed the opening night crowd at the Jewish Community Center in Manhattan for the National Yiddish Theatre Folksbiene’s perceptive, edgy “Di Ksube” (“The Marriage Contract”). Noted for her amatory advice, Westheimer counseled: “Sex for us [Jews] is not a sin but a mitzvah — on Friday night in particular — so I want you to imagine that. If you have a partner, consider today [Sunday] as Friday.”

What a perfect curtain-raiser for Kishon’s delightful play, which pulses with humor, innuendo, male-female power plays, “marital” ennui and sheer fun. Hurry! Do not miss… it will be playing only through April 6.

After 25 years together, “husband-wife” Elimeylekh and Shifre Borozowski (Itzy Firestone and Suzanne Toren), former secular kibbutzniks, can’t find their traditional marriage contract. Without proof that they are legally man and wife and not living in sin, their daughter, Ayala (Dani Marcus) cannot marry Robert (Eyal Sherf). Robert’s mother (whom he calls “Muti,” and who is presented in the play as only an unheard voice during phone calls to Robert) insists on seeing a document that proves he is marrying into a proper family. With the arrival of Buki (Ilan Kwittken), a young kibbutznik who falls for Ayala, the planned marriage is imperiled. Driving a wedge into the frayed threads of Shifre and Elimeylekh Borozowski’s living arrangement is neighbor Yafa (Mena Levit) an uber-zaftig predator who fuels the unraveling of the parental relationship as long-suppressed hurts and *j’accuse * barbs are hurled across the stage. The production boasts eight wonderful songs (music by Shimon Cohen)* and lyrics by **Moshe Sacher). The functional, attractive set by Joseph Spirito, and lighting design by Dan Scully give this production a shimmering patina. Special kudos for Folksbiene director Motl Didner, a young man whose Yiddish welcome remarks to the crowd I cannot fault. All under the baton of music director Zalmen Mlotek.

The program notes inform that “Di Ksube” is one of the longest running plays in Israeli history: “Revival productions are frequently staged in the original Hebrew, Yiddish and in Russian. There is even a German film adaptation. [In this play] you will find no oppression, no antisemitism, no immigration, no sweatshops, no crime, no disaster, no epic struggle of faith, no evil spirits and no swindlers. So what is left? Love, marriage and sex….” It’s to enjoy.

In 1994, when then Yeshiva University president Norman Lamm presented Erica Jesselson (who died March 12) with the National Foundation for Jewish Culture’s Jewish Cultural Achievement Award at its annual gala, he stated: “She is overly generous. She puts others to shame. She can’t resist an outstretched hand, gives tzedakah beyond the limits of Jewish law, and when she gives money, she gets involved. She shuns honors and revels in anonymity and hoards mitzvahs for their own sake.”

Jesselson declared: “Being a patron, writing the check is the easiest part. What is important is the striving for excellence, quality and standards in Jewish art because there is so much banality in the marketplace, so few can distinguish between quality and kitsch. I will cherish this award more than the jewelry I have in the safe.”

Lauded for her generosity to the arts and the Jewish cultural arena, she endowed the Jewish National Library of Hebrew University, the Israel Museum, the Bezalel School of the Arts, the Technion, Bar-Ilan University, the YIVO Institute for Jewish Research, New York’s Jewish Museum and Yeshiva University Museum. Jesselson and her late husband, Ludwig (whom she lovingly called “my Luddy”), founded the Yeshiva University Museum, which opened on June 25, 2000, at the Center for Jewish History. She attended the opening. Though wheelchair bound in recent years, Jesselson rarely missed a Jewish cultural event, and as a Forward reader, she sometimes chided me for not giving greater coverage to some of her pet projects. In November 2000, on the occasion of Rabbi Emanuel Rackman’s 90th birthday, Jesselson stated: “1910 was a good year: Vladimir Jabotinsky gave his first speech in Hebrew and the year saw the birth of Teddy Kollek as well as [my husband] Ludwig.”

As war threatened, Jesselson and her sister, Lucy Lang, left Vienna on a Kindertransport for Great Britain. The superb 2000 documentary “Into the Arms of Strangers” (which includes a few frames of the two sisters playing leapfrog) chronicles the evacuation of 10,000 German children to Britain, between November 1938 and September 1939. Some of the children were given, or assumed, British identities; others were eventually adopted.

“Ours was not as traumatic an experience as that of the children in the film,” Jesselson told me during a lunch. She described how she arrived at age 15 in London “erev Christmas 1939,” and how “Rabbi Schoenfeld selected 40 of us children, placed us in homes where were wonderfully cared for until May 1940, when we were evacuated to the countryside. Lang recalled: “Rabbi Leo Jung, who lived in London, came to the Schoenfeld school and asked if there were any children whose families belonged to B’nai B’rith. My sister, Erica, and I went to the lovely private home of a member, where we had waiters [who] wore gloves. Dr. Goller, the Queen’s dietitian — he was Jewish — provided little luxuries and birthday gifts for the children… We were evacuated, before the [German] blitz, to Stotford, a small hamlet. Unlike many young children who never saw their parents again, we were reunited with ours in 1940.” Jesselson will continue to be a remembered “presence” at future functions of the many organizations that owe her an incalculable debt.

I just found a Purim song reference that I omitted in my Abraham Brumberg tribute piece last week. In his 1987 YIVO Yiddish song recital, Brumberg focused on the close relationship between Hasidic melodies, Yiddish folk songs and Ukrainian folk themes. As an example, he cited the popular Yiddish Purim song (taught to Workmen’s Circle/Arbeter Ring students) “Yachne Dvoshe Fort in Shtot *” (“Yachne Dvoshe Rides to Town”) with its refrain *hop mayne homentashn**, hop mayne vayse, based on a Ukrainian folk song that happened to be a major production number during the Ukrainian Dance Troupe’s visit to New York. Another example dear to Camp Kinder Ring alumnae is a song in which a daughter tells her mother about her summer camp ménage à trios: Oyf a bintl hey, hey mit tzvey counselors tzvey, tzvey — oy Mame s’iz gevezn a makhaye *(Mom, it was heavenly on a bale of hay, hay with two counselors —two two) and its more familiar English version “Mother, may I go out dancing?…Yes, my darling daughter,” both based on Ukrainian melodies.