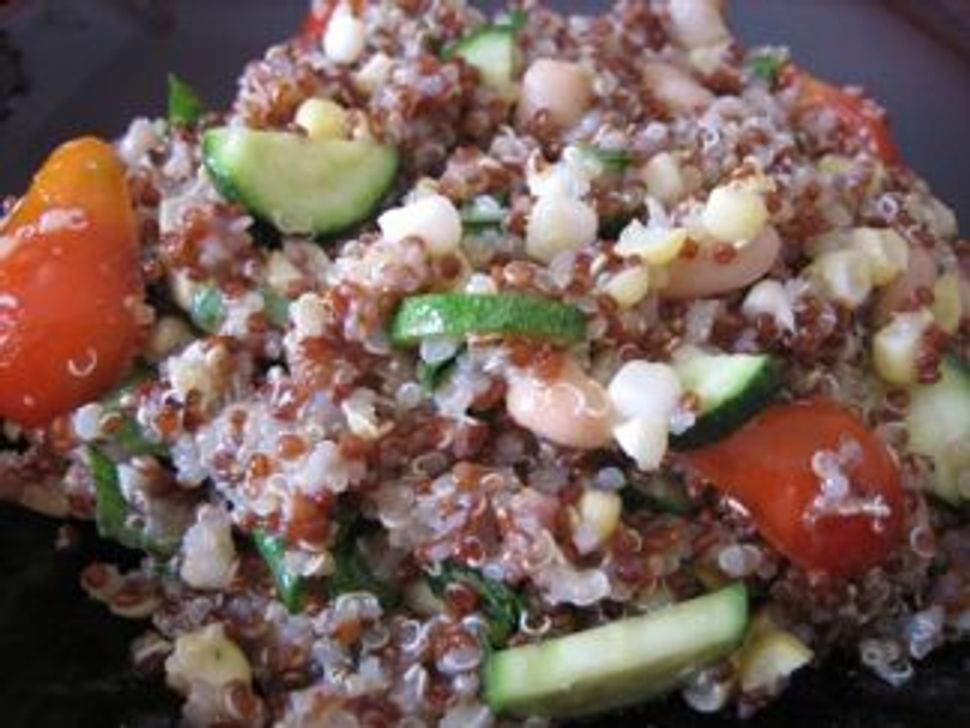 I used to not really get quinoa. I’m sure there are some of you nodding your head in agreement. It’s hard to get excited about something that has so little taste.

But that’s because I had only had it mainly by itself. Quinoa is so ubiquitous here in the Bay Area, that once my friend Dorit showed up at a potluck announcing “I brought the requisite Berkeley quinoa,” and we all knew exactly what she meant. A Berkeley Jewish potluck isn’t a potluck without someone making quinoa.

I have since come around on the neutral little seed. First of all, it has protein. Second, it takes on whatever flavor you put with it. It mixes well with other ingredients and doesn’t dominate. And, it cooks in only 15 minutes.

Also, here in the Bay Area, we can get black quinoa and red quinoa, not only the boring old white (I used a combo of red and white in the photo). At the end of the retreat for the executive committee to plan Hazon’s Food Conference last weekend, a group of us had dinner together. The East Coaster’s minds were blown by the sight of black quinoa.

So yesterday, I was hungry, and wanted to make one of those dishes where I use multiple items from my CSA box at one time. I whipped this quinoa salad together in no time, and it was so delicious, that I’m sharing the results here. In winter, I roast root vegetables, and mix them with quinoa, white beans, pine nuts, mixing with lemon juice and olive oil. In spring, I do the same with roasted asparagus, fava beans, and snap peas, also mixing them with white beans and pine nuts. This is the summer variation, and it’s even easier because the veggies remain raw. (I ran out of pine nuts, unfortunately, but otherwise, they’d be in there, too).

A tip: I always have several cans of beans in the pantry. While I prefer to cook with dried beans, sometimes you want beans when you want them, not the next day.

When the quinoa is done, pour it onto a cookie sheet into an even layer so it will cool quickly. When it is lukewarm, add it to the vegetables. Season with lemon juice, more salt and pepper.