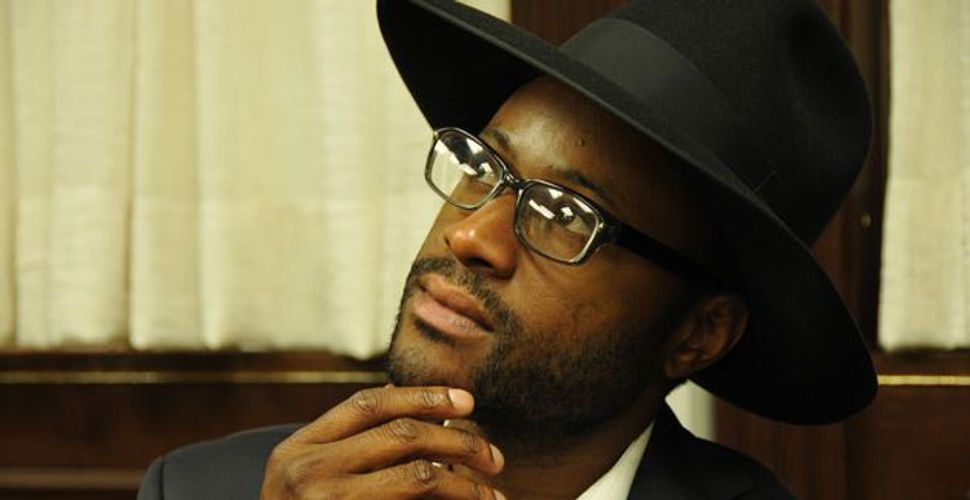 Update: An arrest has been made in the shooting death of Yoseph Robinson.

On Yoseph Robinson’s website, a Brooklyn street scene fades into an image of the Western Wall in Jerusalem. The man in the images leans idly against a Brooklyn lamp; at the Wall he prays, standing erect.

In a video that appears between the two images, Robinson explains his journey: “Who could tell that a kid who came from Jamaica to America to Brooklyn, who could hustle, dribble, whatever you want to term it, would end up praying three times a day to shamayim [heaven]?”

Born in Spanish Town, Jamaica, Robinson moved to Brooklyn at age 12, eventually turning to drugs and street crime. A close friend shot him seven years later, leading him to abandon drugs. He took up hip-hop and invested in a record company in Los Angeles, living a life he described as indulgent. When he was 23, a request for a Bible elicited a Torah and that led eventually to a life of Orthodox Judaism and a return to Brooklyn — where he was murdered August 19.

Robinson, 34, fell at the hands of the lifestyle he had abandoned: He was shot while trying to save his girlfriend from a masked robber who attacked her in the Brooklyn liquor store where Robinson worked as clerk. Police said they were questioning a suspect they did not name.

Though some friends described Robinson as quiet, he was quietly influential within multiple religious circles in Brooklyn. After his death, many grieving messages from different kinds of people across the country flanked his Facebook page. America Online’s Black Voices blog called him “a good man and a role model” who “reminded others of the importance of being morally strong.” Friends are raising money for prayer books in his name. About 1,000 mourners — blacks, Jew and both — attended his funeral. Like the images on his website, those who knew Robinson remember him as a man who tried to connect Brooklyn’s black and Jewish populations in subtle ways.

“He served as a bridge between the different communities,” said William Evans, a multimedia marketer who worked with Robinson. His gregarious attitude, Evans said, attracted both blacks and Jews to the liquor store — and they eventually began talking to each other. “You have this intermingling between them, all because they came to see Yoseph,” he said.

To be sure, Robinson was image savvy. His website sells clothing and accessories embellished with his logo: two men, in hats, carrying Jamaican and Israeli flags. A few months ago, he enlisted Evans to boost his brand online.

But Chaim Deutsch, who founded the neighborhood watch group Flatbush Shomrim and knew Robinson from synagogue, said that the religiosity was no act. “I’d see him praying three times a day,” he said.

Robinson had the same ethos when it came to promoting his autobiography, according to his book publicist, Stuart Schnee. The book, “Yoseph Robinson: Jamaica Hip Hopper Turn Orthodox Jew,” was initially planned for a Hanukkah release. “He wasn’t trying to cash in on it,” Schnee said. “He was writing it to share his religious journey.”

Even in writing his book — which, on his site, Robinson described as a “platform to explore the relationship between Jews and blacks in the United States” — Robinson had to balance his two worlds. In the last e-mail he sent to Schnee, he said he stripped the near-completed manuscript of most profanity. “I no longer use profanity and I don’t feel comfortable using it in writing,” he wrote. But he would keep in the sex references: Although they might offend his frum audience, “this is the story of Yoseph Robinson,” he wrote, explaining that readers needed to feel the full impact of his transformation.

His language resided in that in-between place. “I was making a good living doing whatever work I was doing, thank God,” he told “Talkline” host Zev Brenner in his final radio interview, a few months ago, in reference to his drug days. He backtracked, laughing: “I still say ‘thank God’ regardless if it was illegal.” Brenner said he was planning to use the interview, along with a recent speaking engagement in Long Beach, N.Y., to promote the book.

And then, there were his ongoing conversations. Phillip Goldstein, a reggae disk jockey who lives in McAllen, Texas, found Robinson on Facebook about two years ago. Since then, they talked about music and religion, politics and race. “He was like an angel,” Goldstein recalled.

He remembered their conversations about racism, a subject that, according to Goldstein, Robinson discussed “all the time.”

According to Goldstein, Robinson was drawn to the spirituality and truth of Judaism. Brenner said it brought structure and community. Likewise, Binyamin Jolkovsky, the Brooklyn-based editor-in-chief of the Orthodox site jewishworldreview.com, said he has noticed about a dozen black converts at his Flatbush synagogue. “A lot of them believe that there’s a certain level of truth in Judaism that is the original,” he said.

Robinson completed his conversion almost a decade ago in Los Angeles. Since then, he turned to a variety of media to educate Jews about a culture with which they may not be so familiar: He spoke at synagogues and schools, and once even called Dennis Prager’s radio show to criticize what he saw as racial insensitivity.

When Robinson went to Long Beach, Brenner said, the black custodian at Young Israel synagogue stopped him. “Man, why did you give it all up?” he asked. “You had the money and the women. Are you in your right mind?”

Robinson responded, “I was kidnapped by God.”