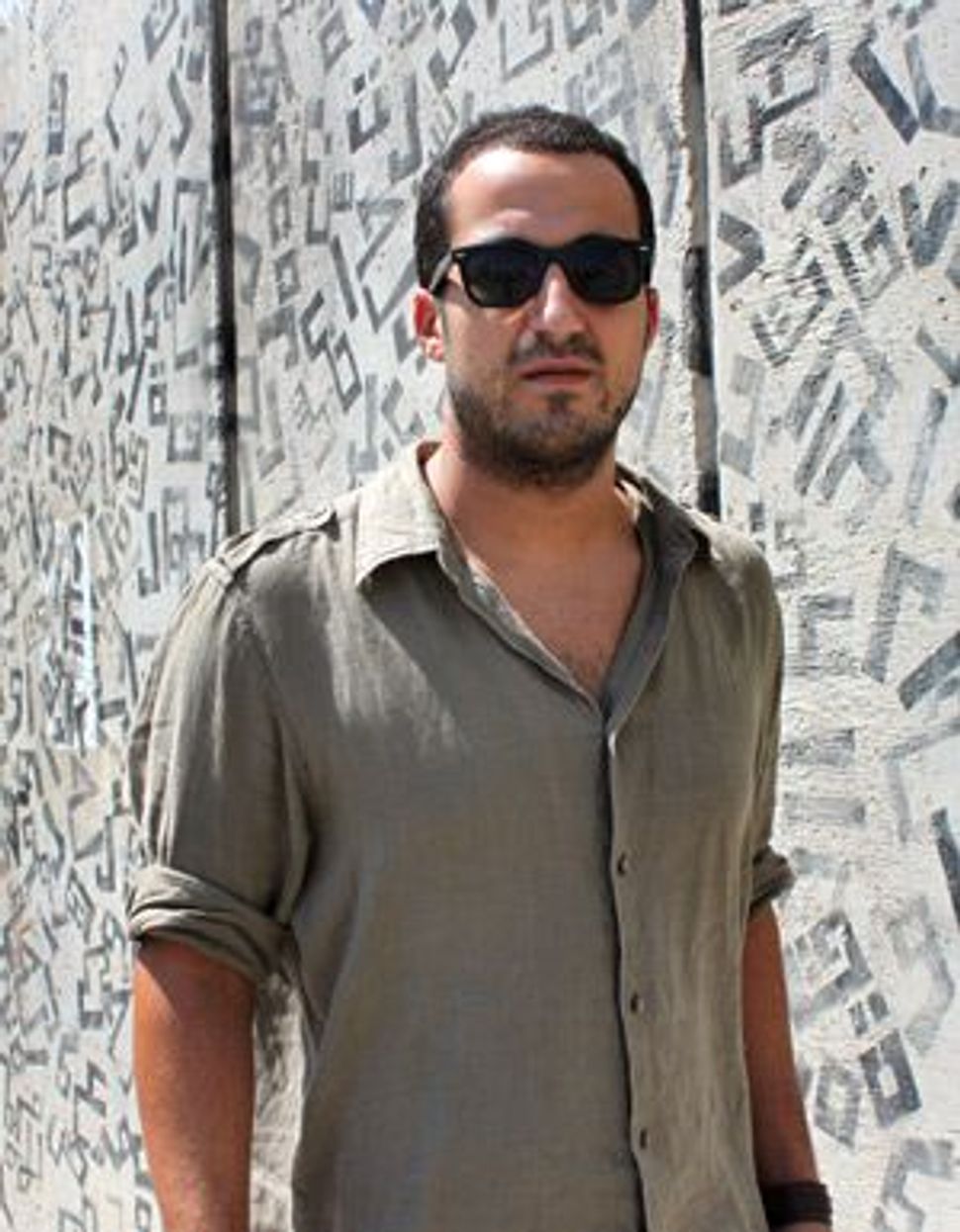 The Medium Is the Message: Palestinian artist Majd Abdel Hamid has painted on Israel?s security barrier a jumble of letters that, when unscrambled, spell out the Palestinian Declaration of Independence. Image by DANIEL ESTRIN

What many Israelis see as a security barrier, and many Palestinians see as a prison wall, Majd Abdel Hamid sees as a blank canvas. 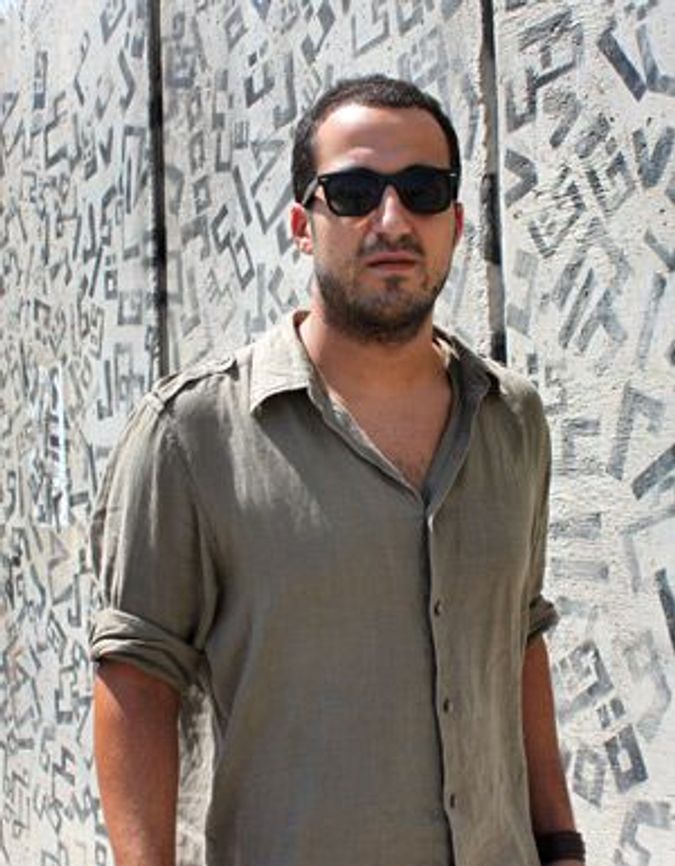 The Medium Is the Message: Palestinian artist Majd Abdel Hamid has painted on Israel?s security barrier a jumble of letters that, when unscrambled, spell out the Palestinian Declaration of Independence. Image by DANIEL ESTRIN

Back in 2007, Abdel Hamid and two assistants spent two 10-hour days painting a 130-foot-long portion of the barrier that separates Israel from the West Bank. On the concrete slabs, they stenciled a jumble of Arabic letters. Unscrambled, the letters spell out the Palestinian Declaration of Independence, written in 1988 by Palestinian poet Mahmoud Darwish.

In recent decades, in some of the world’s most politically charged places — such as Berlin and Belfast — walls have become magnets for an increasingly sophisticated, increasingly political genre of graffiti artists. As Israel began building its security barrier in 2002, at the height of the second Palestinian uprising, with the stated goal of preventing terrorist attacks, artists from around the world began to flock to the West Bank to protest its existence by covering it with paint.

Eight years later, the barrier, made up of alternating fences and walls, is mostly complete. In dense Palestinian urban areas around Jerusalem, where the barrier is a wall, formerly bare concrete slabs have taken on a clutter of artwork, graffiti, posters and commercial advertisements.

Most famously, back in 2005, the British guerilla street artist Banksy — known for sauntering into the world’s top museums and hanging his own art on the walls — came to the West Bank and painted nine works on the Palestinian side of the barrier, including an image of oversized sofas next to a window looking out of the wall, and a depiction of children digging their way out.

Two years later, around Christmastime, Banksy returned to Bethlehem with a coterie of street artists, including Italian artist Blu, who painted ona giant man who is using one finger to crack a guard tower attached to the barrier; British artist Paul Insect, who drew a woman who has doves over her eyes, and American artist Ron English, who also painted on the Berlin wall shortly before it fell.

There have been other creative uses of the barrier, too, with some using it to announce car washes and souvenir sales. In Bethlehem, the Bahamas Seafood Restaurant, just yards away from the concrete barrier, tacked a giant menu onto it. Meanwhile, visitors to the Dutch-Palestinian website Sendamessage can enter a message, and for 30 euros it will be spray-painted on the Palestinian side of the barrier — with the final product e-mailed to the customer. So far, Sendamessage has commissioned political slogans, birthday greetings and about 10 marriage proposals. Messages deemed vulgar or bigoted are not permitted.

The company’s Palestinian coordinator, Faris Arouri, called its operation “communication art” and said that the proceeds go to Palestinian nongovermental organizations supporting small cultural and educational projects. ”We check the profile of the artists, what are their political stances, if any,” Arouri said. “We don’t want our work to end up a part of an ultra-Orthodox artist or Zionist artist or fundamentalist Muslim artist’s work. We want to stay away from controversy — this kind of controversy.”

Since they began work in 2007, Arouri said, his group has been detained by the Israeli military twice. On one occasion, according to Arouri, the army asked them to sign a statement declaring that they won’t paint on the barrier anymore; one group member crossed out the word “won’t” before signing it.

In a written statement, the Israeli military spokesperson’s office said that the barrier is considered military property and that “causing damage to the fence and engaging in unauthorized contact therewith, including by spraying graffiti, are prohibited.”

Arouri said that one mural very close to a checkpoint was plastered over by the Israeli military. And according to locals in Bethlehem, Israeli soldiers recently painted over graffiti near the city’s main checkpoint, with light-blue paint, as a part of their preparation of the checkpoint for Ramadan worshippers.

The critical mass of art and messaging on the separation barrier has sparked a debate within the Palestinian art community about whether it should be painted on at all.

“They are changing the reality of the wall,” said Muhannad Al-Azzeh, an artist whose murals cover the walls of refugee camps in Bethlehem. “It’s a military color, and an ugly color, so keep it as ugly. I will not want to make this wall a beautiful thing.”

“This space is there,” Abdel Hamid countered. “You have an opportunity to use it in a conscious way.” Still, he said that he did not agree with all the art displayed: He criticized English-language graffiti that equated a swastika with an Israeli flag.

As for those who not only live with the barrier near their homes, but also view the art every day, reactions are mixed. Majed Ghareeb, who works at a souvenir shop across the street from a display of giant photographed portraits of people making silly faces, stood across from the barrier and offered up his own interpretation, as if standing in a contemporary art museum. “He’s smiling,” Ghareeb said of a boy’s portrait, “because he knows that in the end, the wall will not be here.”

But Mike Canawati, a restaurateur and souvenir shop owner in Bethlehem, was angry when Banksy left his mark on the side of a building across the street from his shop: a soldier checking the paperwork of a donkey.

“I don’t like the idea of putting Palestinians as donkeys,” Canawati said, explaining his interpretation of the piece. So he created a business opportunity: He cut out the slab with the artwork from the building and offered it for sale for $200,000, with the proceeds going toward renovating churches and to other charitable projects. A British art dealer claimed he had a buyer that ultimately backed out.

Still, Canawati keeps Banksy’s art in the driveway of his shop, waiting for the next offer. Though he isn’t pleased with Bethlehem’s graffiti art, it has turned him into an international art dealer of sorts.

“If the buyers come,” Canawati said, “I am ready to cut down all the walls of Bethlehem.”