Anniversary of WTC Attack To Prompt Rallies Amid Holy Days 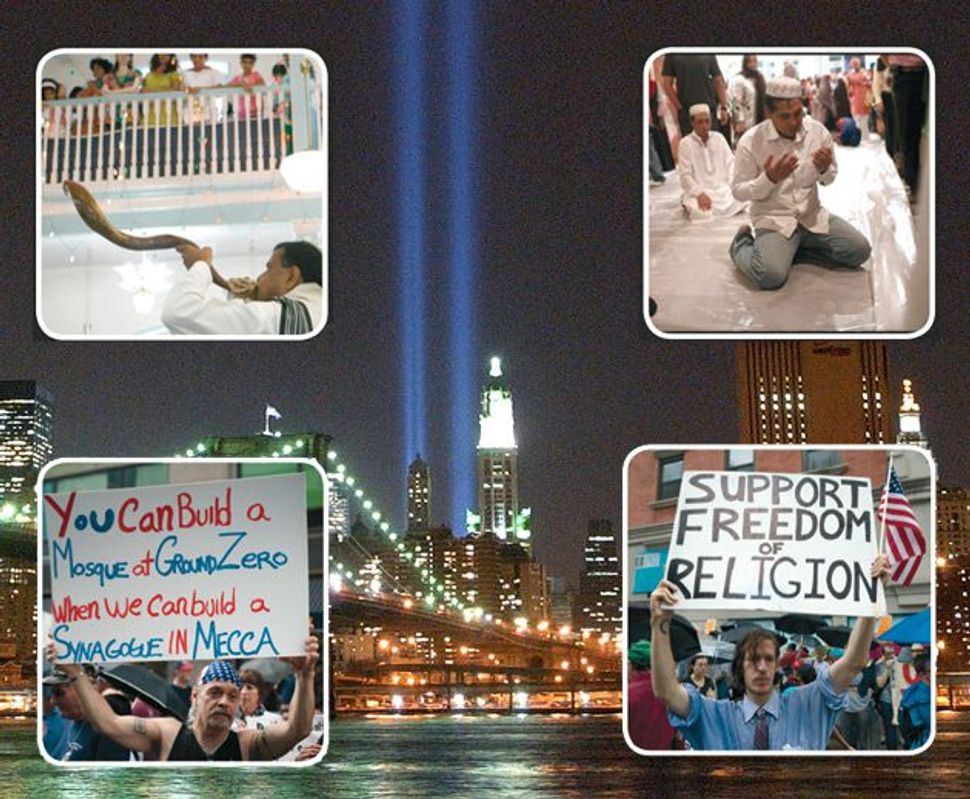 Fateful Day: This year?s commemoration of the destruction of the World Trade Center by terrorists who claimed to act in the name of Islam will take place as protesters rally against and in support of a planned Islamic cultural center nearby in Lower Manhattan. At the same time, Muslims and Jews will observe their religions? most important holy days. Image by GETTY IMAGES

The lunar calendars of two religions and the electoral cycle are coming into alignment with the controversy that has seized the nation, setting the stage for a political and religious drama on the narrow streets of Lower Manhattan on September 11.

The anniversary of the World Trade Center attacks this year comes days before the New York State primaries, just as the controversy over the planned Islamic cultural center near Ground Zero seems to be coming to a full boil. This ninth anniversary also coincides with both the Muslim festival of Eid al-Fitr, which celebrates the end of the Ramadan fast, and Shabbat Shuva, the Saturday between Rosh Hashanah and Yom Kippur. All signs point to a fraught day around Ground Zero.

In addition to the memorial services that have taken place in Lower Manhattan every September 11 since 2001, a group opposed to the Muslim community center project has scheduled a rally that organizers expect to draw at least 10,000 people. The rally will feature Geert Wilders, a controversial Dutch politician known for his anti-Muslim views. Meanwhile, some in the Muslim community worry that their Eid al-Fitr festivities will be misperceived as a celebration of the September 11 attacks.

“I think it will do the nation a great deal of good to see tens of thousands of patriots at Ground Zero,” said Pamela Geller, the blogger and right-wing political activist who is organizing the rally against Park51, as the Islamic center project is currently known. In past years, she said, the area around Ground Zero has been “overtaken by crackpots and truthers and commies and socialists and freaks” on the anniversary of the attacks.

Geller’s rally is set for 3 p.m. It is expected to follow the official ceremony, which has not yet been announced but has been held in recent years at Zuccotti Park, a tree-lined plaza overlooking a corner of Ground Zero.

The rally will be held on the corner of Park Place and West Broadway, half a block from the proposed site of the Islamic community center and two blocks from Ground Zero. In addition to Wilders, the rally will feature a videotaped address by John Bolton, ambassador to the United Nations during the second Bush administration, and speeches by Republican political candidates and by a conservative radio host. Former GOP House speaker Newt Gingrich was previously listed as a speaker, but he is not attending. A spokesman for Gingrich said that he had never intended to attend, and that the listing was based on a misunderstanding.

Wilders, whose Party for Freedom is currently the third largest in the Dutch Parliament, rode to prominence in the Netherlands on a populist program emphasizing the threat posed by Muslim immigration. Besides advocating an end to such immigration, he has called for a ban on the sale and distribution in the Netherlands of the Quran, a book he compares to Hitler’s “Mein Kampf.”

“The only issue by and large that he’s identified with is Islamophobia, as well as being anti-elite, increasingly,” said Cas Mudde, a visiting professor at the Prindle Institute for Ethics at DePauw University. “For Wilders it doesn’t matter whether you’re black or white. It truly is Islam. That’s his only prejudice.”

Wilders has his defenders, including Daniel Pipes, director of the hawkish Middle East Forum. Pipes has praised Wilders for his support for Israel, his charisma, and his party’s mainstream conservative ideological roots.

Ilario Pantano, a Republican candidate in a congressional contest in North Carolina who is traveling to New York to speak at the rally, said that he had no problem appearing beside Wilders. “I’m particularly sensitive to the Islamic threat, and candidly I think that they find no worse enemy than Ilario Pantano,” Pantano said.

Another rally speaker, Gary Berntsen, a candidate for the Republican nomination in one of two New York Senate races, drew a distinction between himself and Wilders. “I’m not anti-Islamic,” Berntsen said. “It’s not what [Wilders] says that matters, [but] what I say.” Though he opposes the proposed Islamic center near Ground Zero, saying that it would constitute a security threat, Bernsten said, “What I say is, we need to respect Muslim Americans.”

Mudde said that Wilders is somewhat embattled in the Netherlands, where he is facing legal charges for inciting hatred and discrimination. “In a sense he does need also foreign people to speak out on his behalf,” Mudde said. “He [is looking] for a larger and in a sense more respectable movement against Islam.”

Geller said that the date of her rally was set for September 11 not in order to coincide with the commemorations, but in response to news reports that Imam Faisal Abdul Rauf, the leading figure behind the Park51 project, planned to break ground on the proposed building September 11, 2011. The Forward reported in June that Rauf had said that no such date had been set.

Meanwhile, half a block from the rally, services observing Eid al-Fitr will be held at the proposed future site of the Park51 project. Representatives for the mosque that currently uses the prayer space did not respond to requests for comment. But Kamal Wahad, a security guard on duty at the building, said that there probably would be more guards on duty during the three day festival, which begins on either September 10 or September 11, depending on observations of the moon.

“Certainly it’s either going to [begin] on the 10th or the 11th, and I would say that most of us are really praying that it falls on the 10th,” said Imam Talib Abdur-Rashid, second vice president of the Islamic Leadership Council of New York and spiritual leader of the Mosque of Islamic Brotherhood in Harlem. “We’re anticipating that the same religiously intolerant, bigoted people who are purposefully misrepresenting the Islamic faith, we know that there are going to be attempts to misrepresent the celebrations.”

A spokesman for the Council on American-Islamic Relations, the Washington-based civil rights and advocacy group, said that there are discussions within the Muslim community about cancelling or postponing events like fairs and bazaars that often take place at the end of Ramadan.

“It’s fascinating how people seem to exclude Muslims from the tragedy of 9/11,” Wahad said. “They [perpetrators of the World Trade Center attack] wanted to kill us just as much as they wanted to kill other Americans. We feel sad that the perception is that somehow we didn’t participate and die in the event, when in fact we did.”

Rabbi Meyer Hager of the Wall Street Synagogue, a Modern Orthodox synagogue a few blocks from Ground Zero, said that his Shabbat Shuva service would include a special Hazkarah, or memorial service, in memory of members of the congregation who died in the September 11 attacks.

Later in the evening, after the larger commemoration and rally, one interfaith group is organizing what its spokesman called a “peaceful prayer service” on Pier 40, a few blocks uptown from Ground Zero. The Interfaith Center of New York will run a Buddhist memorial service and interfaith service with the New York Buddhist Church, in which rice paper lanterns with the names of September 11 victims and messages written on them will be kayaked into the river, lit and set afloat.

Another group, which supports the Islamic center project, said that it was setting its Lower Manhattan rally for September 12 to avoid getting embroiled in the complex politics of the preceding day. “We didn’t want to create an opportunity to conflict and clash with the [anti-Park51] protest,” said Frank Fredericks, a spokesman for the new group, Religious Freedom USA. “We didn’t want to distract from the memorializing nature of 9/11, and specifically for a 9/11 family member we felt like this was a very hard day, and we felt it would be very disrespectful for us to hold the demonstration on 9/11.”

Anniversary of WTC Attack To Prompt Rallies Amid Holy Days