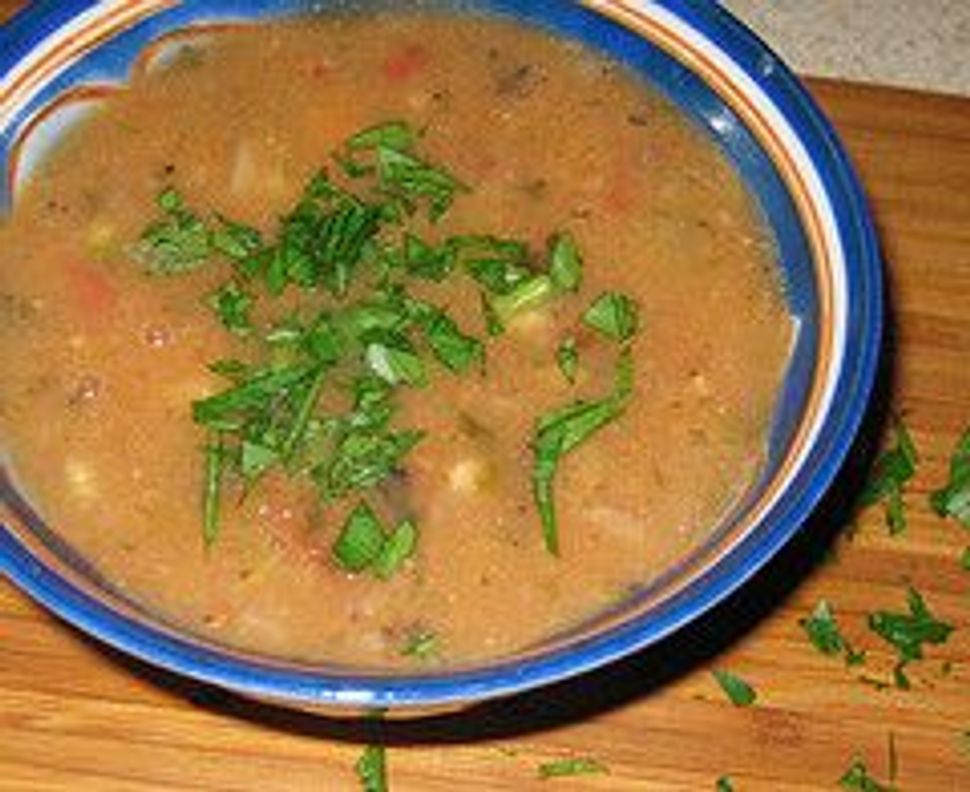 People love to cook for intimate gatherings, but they also have a fascination with mass-producing food. I, for one, am guilty of an obsession with the Food Network show Unwrapped and immediately join the line for any tour of a cheese-, chocolate-, or bourbon-making operation. I’ll also tune into any show that gives chefs a ridiculously short amount of time to cook for an outrageous number of people—preferably with some kind of added challenge, like making dinner for a cruise ship filled half with gluten-sensitive diners and half with people who subsist entirely on whole wheat bread… while the boat heads directly for a storm on the high seas.

This odd interest led me to the kitchen at the Asilomar Conference Grounds during the Hazon Food Conference in December. From that relatively small space, chef Danny Abbruzzes, a newcomer to kashrut, was charged with creating meals for 630 three times a day, all of which were glatt kosher and used ingredients that were organic, local, and minimally processed whenever possible.

Armed with recipes from the conference’s food committee, food donations arranged by same, and, eventually, a grasp of kosher law (with careful supervision by meshgichim from the Vaad Hakashrus of Northern California), Abbruzzes and his team did produce those meals—as well as ingredients for food demos and an endless stream of snacks and kiddish spreads.

I sat down with Abbruzzes during the conference to ask just how the team accomplished this. “It’s hard to take recipes made for home and increase the recipe size by 200,” Abbruzzes casually understated, but his smile hinted that he enjoyed the challenge.

In addition to that, he and the organizers had to deal with some complications. In some cases, Aramark, Asilomar’s managing company, refused donations on the grounds that the producers did not meet certain food safety standards (you can read a detailed account of the challenges on Grist). Then everyone had to scramble to figure out how to compensate. At other times, the donations came up short of what Abruzzes expected.

When I asked about the tasty persimmon-colored “hummus” that so many of us conference-goers enjoyed with vegetable crudités, the chef let out a deep laugh. “You’re gonna love this,” he said, continuing to chuckle as he shuffled through papers that looked like they had made their rounds of the kitchen, and in the process fallen pray to a crazed copy editor. He finally produced one marked-up page with a recipe for a vegetarian tagine. Discovering that a planned hummus donation came up short, Abbruzzes had taken a batch of the chickpea- and tomato-based dish and pureed it up as a dip for mid-day snacks. We ate a hot version, with chunks intact, for Saturday night’s dinner.

“Recipes are just guidelines,” the chef reminded me. I’m guessing it’s this philosophy that gets him—and all extreme cooks—through the day.

In the spirit of curiosity and improvisation, I would like to present one of the recipes we ate at the conference. With those knobby wonders known as Jerusalem artichokes available locally in much of the country right now, it seems appropriate.

The quantities in parenthesis scale the recipe down to a rational at-home batch size. Like the original, these are just guidelines. If you come up with a better way to do it, leave a comment!

Updated: The original recipe comes from Claudia Roden’s The Book of Jewish Food.

A mirepoix made up of:

1 additional bottle (3 Tbs.) of wine, or some lemon juice

In a heavy-bottomed pot, sweat onion, carrots, and celery in oil. This means to put the mirepoix mixture on low heat, salt them, and allow them to “sweat” and cook until they’re opaque.

Then turn up the heat slightly, add the garlic, and sauté for a minute or two. Go ahead and add some salt at this point. Throughout the cooking process, you should be adding salt and pepper little by little to create depth of flavor.

Now add the first bottles (or cup) of white wine and simmer, uncovered, until the volume is reduced by half and you smell the alcohol burning off.

Simmer, covered, for 30 minutes or until tender.

Add tomatoes and stew for another hour (Writer’s note: I only simmered another few minutes). Update: At this point, you can puree half or all of the soup using an immersion blender or food processor. How much you puree depends on how chunky you like the final product.

Hit it with the last bottle (or tablespoons) of wine at the end (this is called “raw wine”), or lemon juice.

Serve hot. Tastes even better the next day.