For Many Jews, Stem-Cell Ruling Puts Progress at Risk 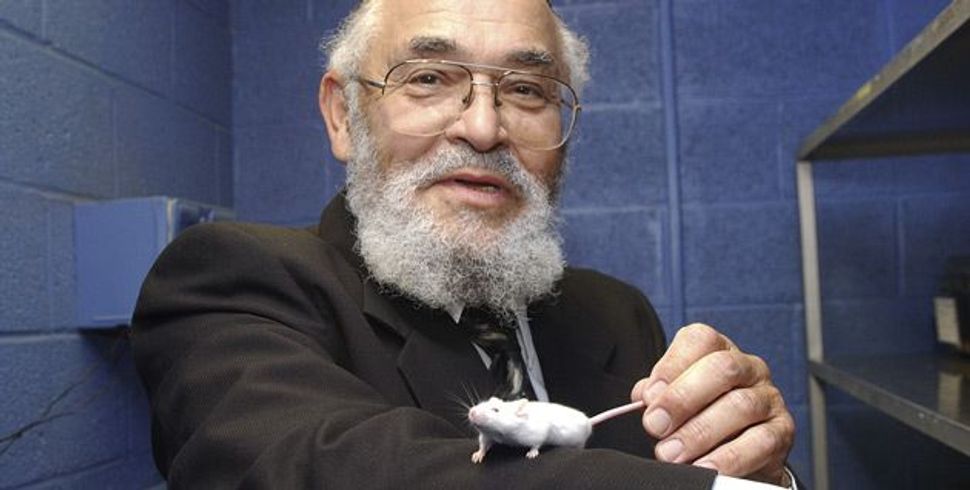 Progress of Science: Moshe Tendler, an Orthodox rabbi and a bioethics expert at Yeshiva University, said he thought the stem cell ruling was ?an immoral decision? from a Jewish perspective. Image by COURTESY OF YESHIVA UNIVERSITY

A wide spectrum of Jewish groups is voicing outrage against a judge’s surprise halting of federal funding for embryonic stem-cell research and are asserting a crucial Jewish stake in reversing the ruling.

Even some key Orthodox groups and leaders, who are often aligned with the Christian right on right-to-life issues, are diverging from their allies when it comes to government funding for research on embryonic stem cells-—unique life forms seen as having the potential to cure many fatal diseases but that are obtained from discarded human embryos. The issue is complex and sensitive because it touches on the question of when a human life begins.

Talmudic tradition dictates that life begins 40 days after conception, explained Moshe Tendler, a prominent Orthodox rabbi and Yeshiva University bioethics expert. Because of the Jewish imperative to help humans in need of treatment, progress constitutes a special mitzvah, he said. An embryo that’s never been implanted in anyone and that has been frozen before the 40-day mark “can be used, since it has no moral claim to humanity,” Tendler said.

Tendler called the ruling “an immoral decision” from the Orthodox perspective: “It interferes with the progress of science.”

Michael Broyde, an Orthodox rabbi and Emory University law professor, said that in contrast to some Christian traditions, “we like tinkering with nature,” especially when it comes to research that can further human life.

Embryonic stem-cell research can potentially save lives with regenerative therapies, noted Rabbi Leonard Sharzer, a bioethicist at the Conservative movement’s Jewish Theological Seminary. Sharzer, who is also a physician, stressed that this ethical underpinning made stem cell research a Jewish issue.

“There is a strong Jewish predisposition toward health and advancing science that has a potential for improving health,” he said.

Catholic doctrine puts human life at the start of conception. “We object ethically to embryonic stem-cell research, because it requires destroying human embryos,” said Richard Doerflinger, the United States Conference of Catholic Bishops’ pro-life expert. “At every stage, the embryo is a member of the human race. Everyone was an embryo — we’ve just all grown up since then.”

Doerflinger said that the vaunted status of embryos also derives from scriptural passages that describe God as unconditionally caring for each human life.

In an official statement, the bishops group hailed the ruling as a “welcome victory for common sense and sound medical ethics.”

Shortly after U.S. District Chief Judge Royce C. Lamberth issued his injunction, the National Institutes of Health halted some funding and its own research. The Obama administration said it would appeal the ruling. For stakeholders such as Jewish groups that favor federal funding of embryonic stem-cell research, the question during contentious midterm elections is whether voters and politicians will care enough to push Congress to reverse the ruling via legislation as economic recovery dominates the political agenda.

The Washington-based Religious Action Center, Reform Judaism’s national lobbying arm, planned to be “forceful advocates” for reversing the ruling, said associate director Mark Pelavin, by supporting the administration’s appeal, perhaps with an amicus brief, and, if that failed, by pushing for remedial legislation.

Nathan Diament, a Washington lobbyist for the Orthodox Union, said, “We hope that the injunction will be rescinded and the research will be able to go forward.” If it is not, and the administration has to go back to Congress, he said, “we will support that legislation.”

Among major factions within the Jewish religious spectrum, only ultra-Orthodox groups did not declare opposition to the ruling. Rabbi Avi Shafran, a spokesman for Agudath Israel of America, an umbrella group that often represents Haredi views, said that the group does not have a position on stem-cell research or on the injunction. “But we do consider the issue of destroying embryos to be a real one,” he said.

Sammie Moshenberg, director of Washin gton operations for the National Council of Jewish Women, said that the prominence of the Christian view in shaping policy is what motivated her group to issue a statement against the ruling. “We have long opposed attempts to impose one particular religious belief on all of us in terms of public policy,” she said. B’nai B’rith International also pronounced itself as “very concerned” with the ruling because it delayed crucial research.

Embryonic stem-cell research brings with it a hope of curing as of yet incurable diseases by using regenerative therapies, since these early-stage human cells have the potential to develop into any other type of human cell. To cure diabetes, stem cells would be coaxed into becoming insulin-producing pancreas cells. Researchers see a potential to renew the brain cells that are dysfunctional in Alzheimer’s disease. Though as of yet there are no approved treatments, the first clinical trial on humans — to attempt to restore spinal cord function — was only recently authorized to proceed.

Stem-cell lines are created by separating the cells of unused embryos that are bound for disposal as byproducts of in vitro fertilization. But the process of extracting the stem cells destroys the embryos before they are discarded. Stem cells can also be derived from adults, but these are less flexible.

Lamberth, who issued his temporary injunction August 24, ruled that the federal funding of embryonic stem-cell research violated the Dicker-Wickey Amendment, a 1996 law that bars America’s government from funding research that involves creating or harming human embryos.

During its tenure, the Clinton administration used a legal loophole to fund embryonic stem-cell research despite the law. But George W. Bush restricted that policy when he took office — only to have his policy reversed, in turn, with Barack Obama’s ascension to the presidency.

Lamberth’s ruling puts into question the future work of researchers like Timothy Kamp, co-director of regenerative medicine at the University of Wisconsin. Kamp’s federal grant, funding his work on the electric qualities of the heart, is up for renewal in early 2011. “There are no pots of money sitting around, waiting for this problem,” Kamp said, adding that the potential fallout could include layoffs of his lab personnel.

For Many Jews, Stem-Cell Ruling Puts Progress at Risk