And in This Corner, Salita Boxes for Redemption 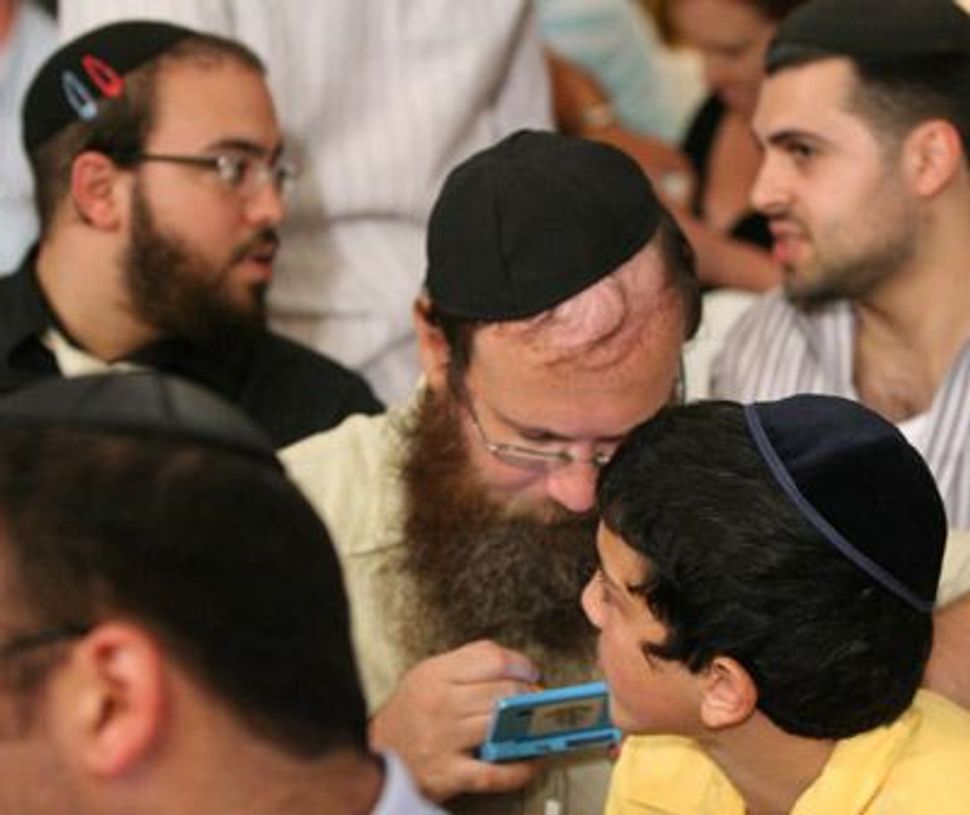 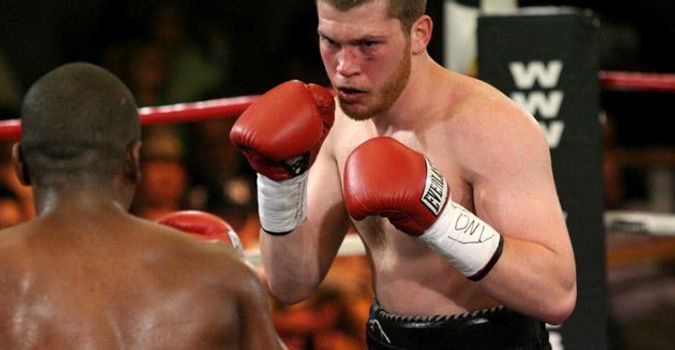 For nine months now, Dmitriy Salita, the Russian-Jewish welterweight, has been telling anyone who will listen that the reason for his humiliating loss to Amir Khan in England last December was the hostile, jeering, “anti-Semitic” environment in the Newcastle arena.

On September 2, Brooklyn’s Brighton Beach was to be the site of his redemption.

If someone wanted to experience Brooklyn in one shot, that was the place to be that night, as Salita sought to gain back some honor and peace of mind on a card he himself had billed “Redemption.”

Oceana Hall — a catering venue normally decorated with candles and large floral bouquets for gaudy Russian weddings — couldn’t have been more different from the arena at Newcastle; nor could the Brooklyn crowd have differed more from their English counterparts. 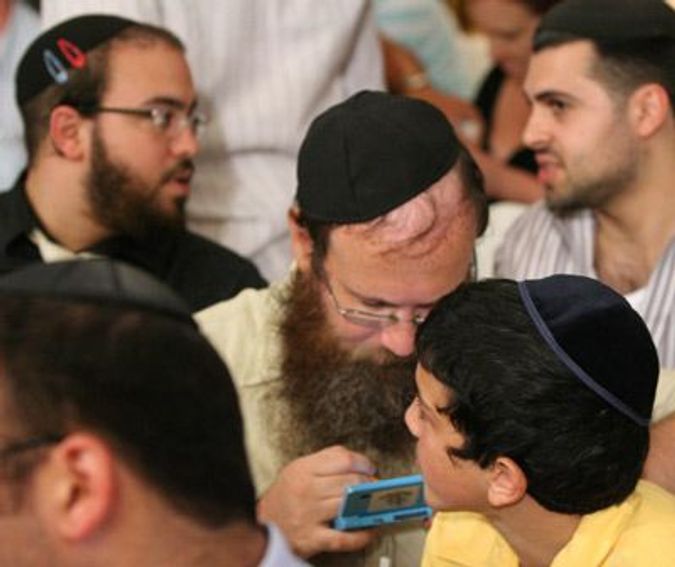 The Brighton Beach turnout was divided evenly into thirds: one part Hasidic, all beards and black hats, drawn from Salita’s Crown Heights fan base; one part Russian, with plenty of gold chains and leopard print to spare, and one part Dominican and Puerto Rican, mostly there for the long list of undercard-fights.

Almost everyone there was chanting for “Dima.” It was his night, and not just because Salita was also the event’s promoter. The audience packed into the small, more intimate space (I saw a number of people wipe sweat from their faces that had just flown off the boxers) lent the evening a familial cast. Banners hung above the ring highlighting the event’s various sponsors, including the Chai Insurance Company and the dentistry practice of Doctors Solomon Grinzburg and Tuvia Zinman, whose banner proclaimed, “We’re always in your corner, Dmitriy.”

There was also at least one nod to Salita’s piety. Instead of the bikini-clad girls who normally circle the ring holding high a card announcing the number of each round, the women here — though tall and wearing thick platform shoes — were fully covered in long black shirts and in jeans.

Everyone assumed that the fight would be largely symbolic, a chance for Salita to regain some confidence after his bitter hibernation. His opponent was Franklin Gonzalez, a 34-year-old Dominican boxer whom someone in the crowd described as looking like a tomato soup can. “He’s short and stout, and Dima just has to knock him over,” this observer said. Besides offering the challenge of being a southpaw (a boxer who leads with his left), Gonzalez was supposed to be, in boxing parlance, a “journeyman,” an older fighter who had been knocked out a few times and would be easy for Salita to pick off.

After Rachel Gomez, a 14-year-old girl in braces, sang the national anthem, the announcer — dressed in a glimmering black lamé suit and sporting long dreadlocks that went all the way down his back — bellowed, “Ladies and gentlemen, it’s time for redemption!”

But the redemption did not come so easily.

Salita, in his signature Star of David trunks, looked tentative and a bit scared during the fight’s first few moments. The room grew as quiet as I’d heard it all evening. Even the woman who had been loudly berating every boxer — “Leave your damn shorts alone and start working!” she screamed at one who was adjusting his trunks — fell silent. As Salita seemed to struggle through the first three rounds, I heard mostly loud sighs. In the third, one of Gonzalez’s lefts caught Salita beneath his eye, causing a large blue bruise to immediately blossom.

But then Salita started to punch back. It wasn’t the dramatic knockout that most people had expected, but about halfway through the eight-round match, things started to go his way as he figured out how to counter what he would later call Gonzalez’s “awkward” style.

As soon as it looked like Salita was not going to suffer what surely would have been the end of his career, the crowd came back alive, though still anxious and loudly exhorting Salita to, “Jab! Jab! Jab!”

I got an earful of the anxiety, since I was standing right next to Israel Liberow, Salita’s spiritual adviser. The compact, red-bearded Chabad-nik was chewing gum

and swaying nervously from side to side. “He’s got a shiner already from nothing,” he said after Salita took the hit beneath his left eye. “Put your hands down and fight!” he yelled.

A natural tension exists in every boxing match that doesn’t end quickly with an immediate Mike Tyson-like knockout. For fans, there is almost a primal desire to see your man just start pummeling his opponent. But boxing doesn’t really seem to work like that. Salita kept his hands in front of his face for most of the fight, hardly taking more than one punch at a time. For a crowd screaming for blood, this was frustrating, but there was surely technique involved.

When it was all over, there was a dissatisfied feeling in the air for the brief minutes when the judges were tallying their points. And then Salita won. By unanimous decision, all three judges scored the match 78–74 for Salita. Just the wide smile on the boxer’s face, beneath his now considerably bruised cheek, was enough to forgive Salita for a fairly undramatic denouement to what should have been a night of clear victory for him.

As soon as the fight was over, I heard a woman behind me phone Salita’s wife, Alona, who is pregnant with their first child. The night was the couple’s first anniversary. After she witnessed his knockout in England, Alona decided that she would never watch him fight again. “He’s not hurt,” the woman reported. “He’s fine, just a cut under his eye. He looks okay.”

In the ring, the triumphant Salita was waving his arms in the air, accepting hugs from seemingly everyone in the hall. At one point, Paulie Malignaggi entered the ring. A well-known Italian-American welterweight who had also recently lost to Khan, Malignaggi looked like he had stepped out of the cast of “Jersey Shore.” He and Salita started bantering on the microphone about fighting each other. “In Madison Square Garden!” Malignaggi shouted. And Salita added, making a charming historical reference, “I think it would be a very exciting fight in New York, and with the Italian and Jewish population behind us, it could be like Barney Ross and Tony Canzoneri in the ’30s.”

In the end, the evening was about Salita’s rehabilitation. And, looking tired but satisfied in the locker room after the fight, he told reporters that after the anger he’d felt for the past nine months, it “feels good going into the yontef with this. I feel redeemed.” And this, after all, was the point.

And in This Corner, Salita Boxes for Redemption