Swimming the English Channel For a Challenge and a Cause

?Torture?: James Meier braves the frigid waters of the Channel. Image by COURTESY OF JACOB MEIER

With 25 miles between him and the coast of France, James Meier, a trim 66-year-old, jumped off a boat idling near Dover and into the cold waters of the English Channel. It was 3 a.m., and after more than a year of chasing the unexpected in training drills, he found himself immersed in what seemed like infinite water.

Wearing a bathing suit, a swimming cap and goggles — the only accoutrements allowed by the English Channel Swimming & Piloting Federation — he began to swim freestyle across the arm of the Atlantic Ocean that separates Great Britain from the European mainland. 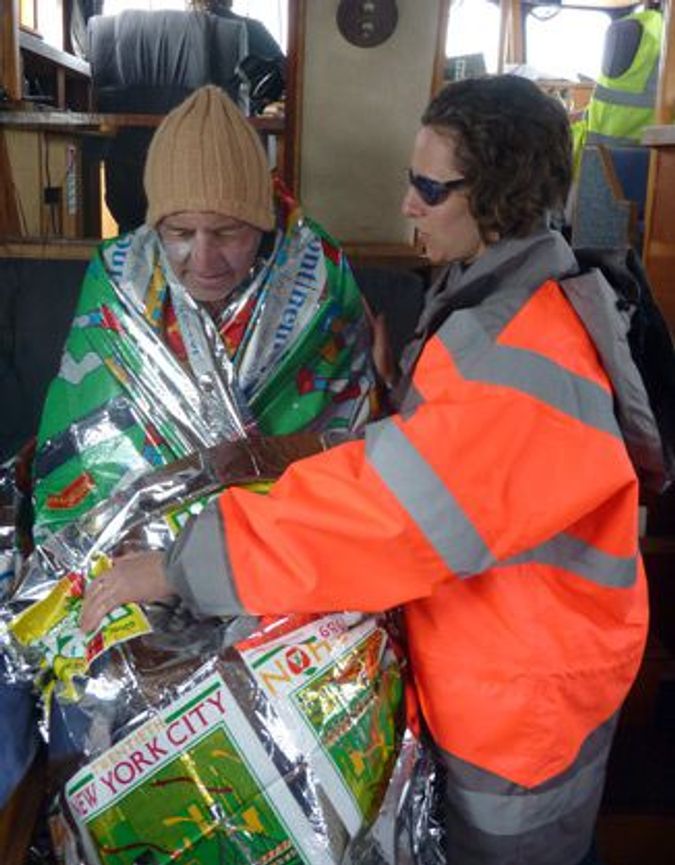 Freezing: Pulled from the cold and turbulent waters of the English Channel, a possibly hypother- mic James Meier is warmed by his daughter, Joslyn, on board a 30-foot escort boat. Image by JACOB MEIER

“Here we go,” Meier recalled thinking as his arms hit the water’s surface on September 6. He smelled the diesel of his 30-foot-long escort boat and tasted the salty water that would continue to assault his nose. The next thought: “This is torture.” But he kept swimming, telling himself he’d just have to push ahead to his next feeding, 45 minutes later.

Meier, of New York City, has run marathons, completed cross-country ski marathons and, in the late 1990s, returned to his initial sport: swimming. The president of Arete, a management consulting company, he swam near Brooklyn’s Brighton Beach and in a race around Manhattan. The next logical step was swimming the English Channel. “In Manhattan, you get assisted by the currents,” he said on August 26, in an interview in his office and only hours before flying to England. “The Channel is the benchmark.”

The Channel is also known as a shipping route. But since 1875, when Matthew Webb, a Brit buoyed by brandy, breaststroked his way across, the waterway has become the ultimate challenge to open-water swimmers: Its waves are ferocious, and the currents work against most swimmers. Water temperatures near 60 degrees have been known to induce hypothermia.

Still, about 18 months ago, Meier decided he was in. He had just stepped down as chairman of the board of the American Jewish World Service and needed a new challenge. “I’m always looking for the next test of my limits,” he said.

A friend suggested they do it together, but then withdrew. The swim appealed to Meier because it put him at nature’s mercy. “It gives me a tremendous sense of humility and awe about how small we are on the face of this gigantic earth,” he said. Fellow swimmers offered him advice: Don’t look back at Dover’s looming cliffs. They diminish the appearance of progress.

Meier trained for speed in a pool. He also swam in open waters — near Annapolis, Md., and in the Hudson River — that simulated the Channel’s temperatures. “You can try to create the unexpected,” he explained. After that came registration, which required a test of six hours swimming in cold water and the assembly of a crew, including family members, for the escort boat. The timing of the swim coincided with AJWS’s 25th anniversary, so Meier tied his swim to raising money for the organization, and set a goal of $50,000.

Shortly before his departure, though, a different kind of anxiety set in: Would he even get to swim? The English Channel Swimming and Piloting Federation assigns each swimmer a window of time for a corresponding tide, and gave Meier the period from August 30 to September 6. Once the window closes, a swimmer has to wait for assignment to a new tide, which can take a year. Shortly before Meier left for England, about 24 swims had been canceled by Channel boat captains because of erratic weather. But once he arrived in England, weather conditions allowed him to proceed.

After entering the water, Meier assessed his conditions from feeding to feeding. When the first 45 minutes had passed, the crew threw him a hot carbohydrate drink. Every 30 minutes after that, he would drink more, often supplementing with a swig of chocolate syrup.

Meier couldn’t see a thing, but the feedings felt like medicine. “You totally lose track of time and space and everything else,” he recalled afterward, in a telephone interview.

As Meier faced “washing-machine conditions,” the crew members kept track of progress and feeding. The waves hobbled some in the boat, including Meier’s son, Jacob, 18, with sea-sickness. Jacob had been looking forward to his father’s big swim, and felt anxious on his behalf. “When you have no experience going into the Channel, there’s just this excitement,” he said.

Meier felt that way, too. He swam for 17 miles into the southern shipping lane, falling into a rhythm. At that point, he stopped for a feeding. To his surprise, the Channel’s current had him swimming in place, the crew told him. Though uncomfortable, Meier decided to keep going.

Then the crew told him he was in fact swimming backward. In about another four hours, the tide would change again, they said — and Meier would have to wait in the cold water. He swam a bit more, and the crew noticed that his speech had become slurred. The water got even rougher and more violent. It was time to get out.

Meier felt relief mixed with disappointment. But mostly he just felt cold. His limbs were weary. After swimming for 11.75 hours, he grabbed onto the boat, which lurched up and down in the waves and threw him off. A crew member pulled him in.

As the boat returned to Shakespeare Beach in Dover, Meier’s daughter, Joslyn, thought her father could have borderline hypothermia. He warmed up, in part by resting his feet on a crew member’s warm belly.

“The moment I got out, I felt, you know, I want to try it again,” he said. He would have a better shot next time, knowing what he needed to do differently. “But that’s probably not realistic,” he said.

From England, he wrote an e-mail to his supporters saying that he still felt the allure of the Channel. “I came here with the clear realization and conviction that this would be my first and last attempt… My advancing age is an immutable limiting factor. So I will not be making another attempt — I think.”

Swimming the English Channel For a Challenge and a Cause