Fighting for the Borscht Belt 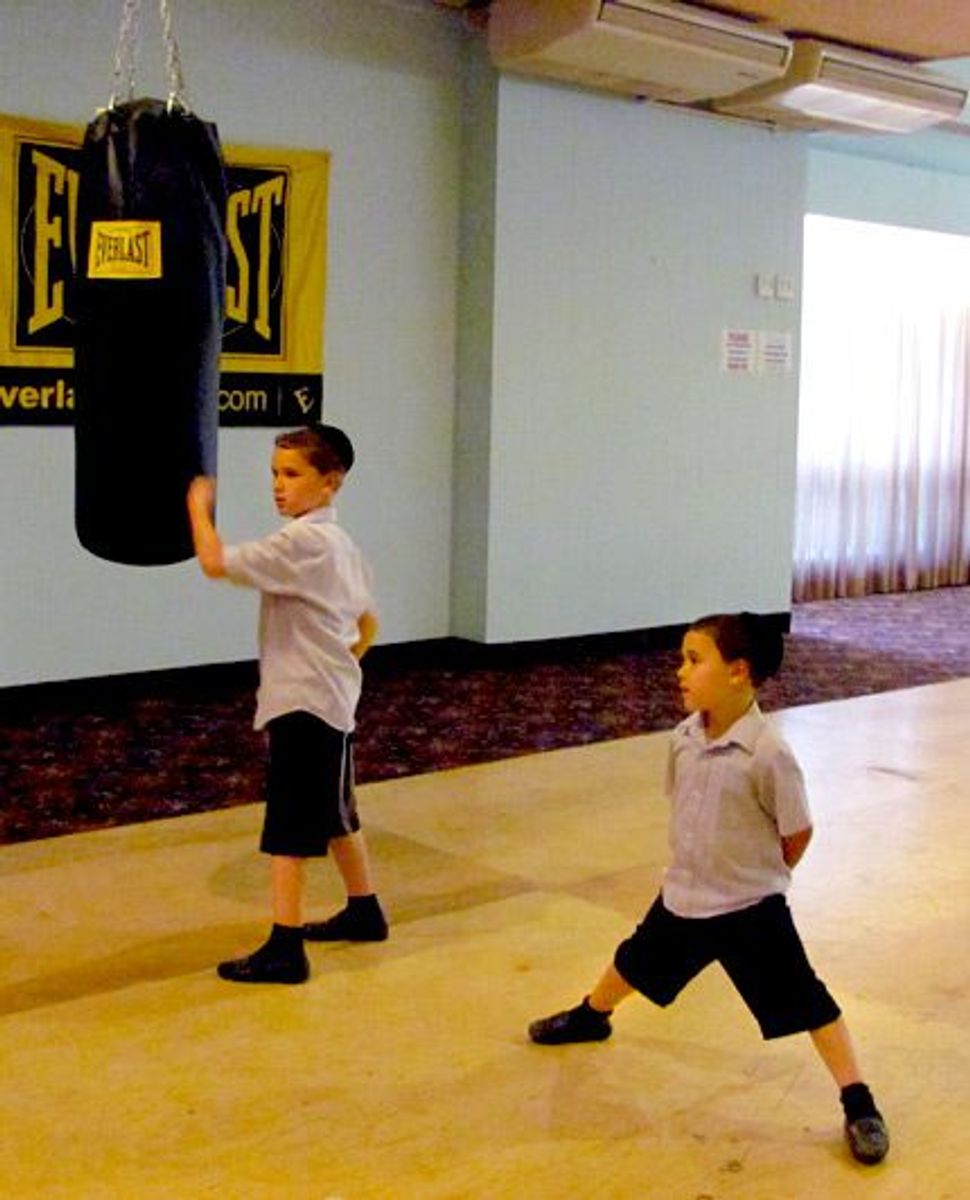 It may sound like the setup for an old joke: It?s dinner time and three gentile kids ? one Latino, one black and one white ? are waiting impatiently for a slow Shabbos elevator to arrive.

The punch line comes with a real punch: Turns out the kids are hungry athletes from a boxing camp held every summer at Kutshers Country Club, the last of the grand Jewish Catskills resorts that?s still grand and still Jewish. Rather than being an anomaly, though, the fighters are both upholding a tradition of boxing in the Catskills and helping a remnant to survive. 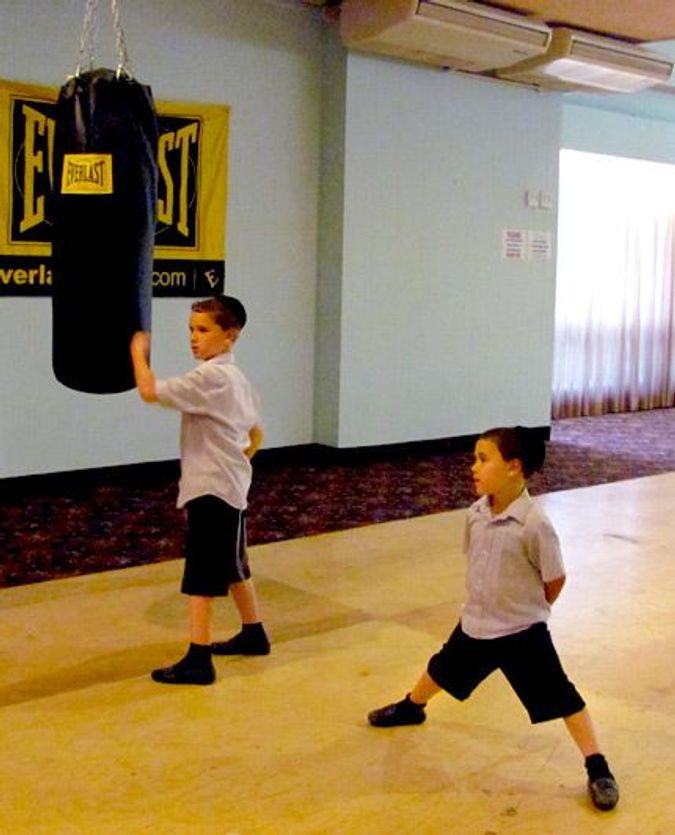 The multicultural gang that participates in Gleason?s Gym?s Fantasy Boxing Camp gets used to bumping into unfamiliar folkways, whether it?s a female Irish boxer from Boston whispering ?What?s kasha?? at mealtime, or boxers in an exhibition round drawing a group of black-hatted Orthodox spectators.

Gleason?s eighth annual camp wrapped at the end of August, and founder Bruce Silverglade, president of the famous Brooklyn gym, said he is pleased with eight successful years at Kutshers and looking forward to more. ?It?s a way to get out of the city and out of the hustle and bustle,? Silverglade said. ?When professional fighters trained at Jewish Catskills resorts in the last century,? he added, ?they would go to Kutshers to chop wood and avoid the distractions of women. They would go there to be secluded and work real hard.?

Champs like Barney Ross, Muhammad Ali, Leon Spinks, Archie Moore and Floyd Patterson all set up training camps at Catskills hotels. Because of that, and because of Jews? own strong history with boxing ? between 1910 and 1940, for example, 27 National Boxing Association titles went to Jewish fighters ? it seemed entirely natural to Silverglade to bring an assortment of would-be boxers to Kutshers. This year?s four-day camp, costing $1,800, included males and females aged 9 to 74, from a variety of skill levels, ethnic backgrounds and locales around the United States. They came to train and to spar with top contenders and champions, and to engage in rigorous training drills, boxing discussions, sparring and ring craft. The camp culminated on a Saturday night with a sparring show that was open to the public.

While Silverglade attempts to re-create the experience of a sports training camp of a bygone era, Yossi Zablocki, the new manager of Kutshers, tries to save a hotel in need of rehabilitation. Both men contribute to keeping a piece of Catskills history alive ? even as other famed Jewish resorts like Grossinger?s and the Nevele have closed.

As the boxers threw punches last month, life proceeded as usual for Kutshers? other patrons. Retired folks are the ?meat and potatoes? of the place, said Zablocki, a legal aid lawyer from New Jersey who seized the opportunity to invest in the resort when it needed help. In the upper lobby, Jackie Horner led a ballroom dance class for five older ladies, one of many hotel activities, which include Big Bucks Bingo, Justine?s Makeover Face Lift Show (with door prizes), and Hassidic stories told by a rabbi. The movie ?Dirty Dancing? was based on real life, Horner said.

?It?s my true story. There really was a Baby, like in the film, and she was my student,? she said as she crossed her slender legs. Remembering her heyday, Horner said: ?We danced all day and all night; we were young. There was a pulse; you?d feel it the minute you hit the Catskills. I even taught the boxers to dance.?

Kutshers Country Club has its own impressive history with sports in general and boxing in particular. The century-old resort sprawls across a 1,400-acre campus, with indoor and outdoor swimming pools, an 18-hole championship golf course, tennis courts, and bocce ball and shuffleboard courts. A guest named Irwin sat with a few cronies by the lake as he complained about the service. No doubt, the place needs some tender loving care. But Irwin, who is in his 80s, said he still comes to Kutshers every year. He performed as a comedian for 19 years at the Raleigh, another big hotel. ?Wednesday night, I?d open the talent show, white straw hat, cane,? he said. He began to sing, ?Another opening, another show?.? Then he told an off-color joke, his eyes twinkling under his jaunty cap.

Across the lake, the Saturday night sparring exhibition was about to begin. There were 12 bouts, three rounds each, and everyone would be getting a trophy. During one of the fights, a small group of Orthodox Jews wandered in and were quietly watching as their little girls, in long frilly dresses, sidled up to the ropes, transfixed. Another tiny Jewish toddler stood on a chair. ?Get him! Get him!? she shrieked, her curls bouncing. Her father, who was wearing a yarmulke, pulled her back into her stroller. There were now three distinct types of headgear in the room: yarmulkes, black hats, and boxing helmets.

Later that night and into the early morning, the campers celebrated in the Deep End Lounge, a disco and bar with windows that looked out onto the indoor pool. On the stage was the shrine Bruce Silverglade has set up to honor Muhammad Ali and Orthodox would-be rabbi and boxer Yuri Foreman. While boxing trainer Martin Gonzalez was cutting loose on the dance floor with some salsa moves, several guests wearing yarmulkes wandered in. They looked confused. ?Is this the show?? No, they wanted the Stardust Room, down the hall, to hear singers Oneg Shemesh and Chaim Kiss, and maybe a little comedy. The Stardust Room was once host to Jerry Lewis, Steve Lawrence and Eydie Gormé, Milton Berle and Sid Caesar, and also to raucous crowds that roared with laughter and applause.

The next day, Silverglade and his crew began to dismantle the boxing rings and pack up the gloves. It was time to ?break camp.? The group was slow to leave, as hugs and business cards were exchanged. ?Boxing people are family,? said Bronx-raised boxer Al Roth, as another generation of boxers and boxing Jews left the Catskills in the summertime.

Binnie Klein is the author of ?Blows to the Head: How Boxing Changed My Mind? (SUNY Press, 2010). She hosts an interview show on WPKN in Bridgeport, Conn.

Fighting for the Borscht Belt