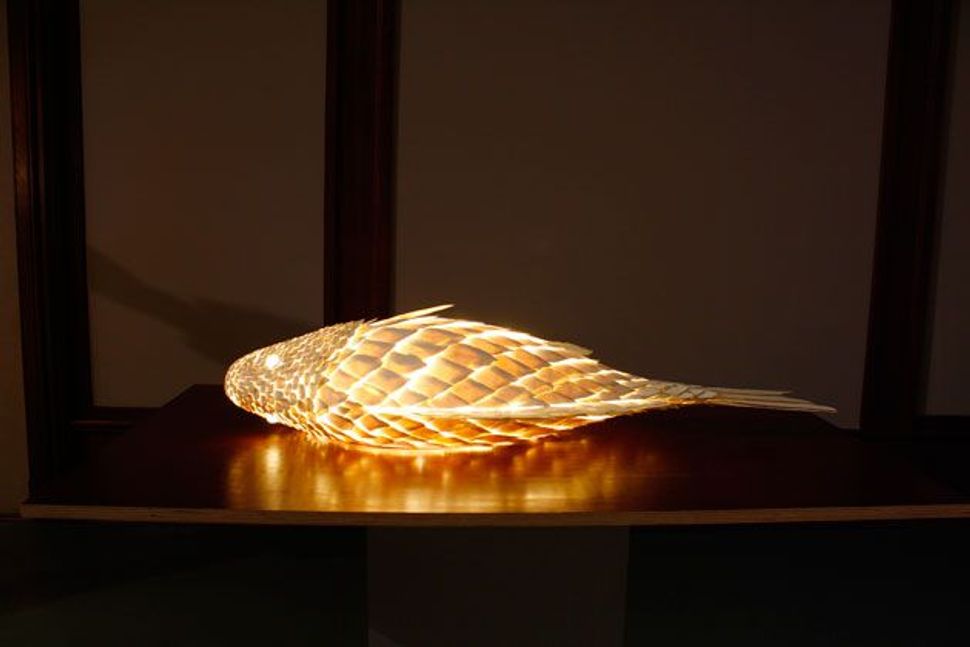 The High Holy Days might incline most Jews to think of fish as a traditional food served on deli trays after Rosh Hashanah and Yom Kippur services. But the Jewish Museum?s new exhibition, ?Fish Forms: Lamps by Frank Gehry,? asks us to think more deeply about how fish have influenced the work of one of the world?s most celebrated architects.

Given the complex nature of Gehry?s architecture, it is ironic that the exhibition is minimalist in character. In a single room stand eight of Gehry?s fish lamps, glowing warmly in their dimmed gallery setting. A brief text mounted on the wall explains that the lamps were designed between 1983 and 1990 and made of a plastic laminate, called ColorCore, from the Formica Corp. As the by-now legendary story has it, Gehry was experimenting with the material one day in 1983 when he dropped a piece on the ground, shattering it; after noticing that the fragments resembled scales, he decided to make a fish out of them, spawning his first fish lamp.

How this fortuitous event shaped Gehry?s subsequent architecture is explained by a short video slideshow accompanying the exhibition. It reveals how, by the mid-1980s, Gehry began using fish forms on a larger scale, at first realistically, as with his 70-foot-high fish sculpture at his Fishdance Restaurant in Kobe, Japan (1986-87), and later more abstractly, as with his enormous copper fish sculpture at the Vila Olimpica in Barcelona (1989-92). In reducing the fish to the essence of its form, Gehry discovered a new architectural language of movement, one that culminated in his celebrated Guggenheim Museum Bilbao in Spain (1997), a building whose curvilinear form and metallic skin can ultimately be traced back to Gehry?s early lamp designs.

As far as it goes, the exhibition makes a strong case for the influence of fish forms on Gehry?s architecture. But it could go further. Surprisingly, especially given its location, the exhibition neglects to probe the deeper Jewish dimensions of Gehry?s fish fetish. While the exhibition text dutifully mentions the architect?s oft-cited childhood recollection of his grandmother keeping a live carp in the bathtub for making gefilte fish, it fails to tie this anecdote ? and the symbolism of fish more broadly ? to Gehry?s sense of Jewish identity.

Although the exhibition implies that Gehry viewed the fish positively as a symbol of traditional Jewish folkways, it does not mention that it was also a symbol of Jewish suffering. During his youth in Timmins, Ontario, Gehry was frequently beaten up by children who, having gotten wind of his grandmother?s peculiar culinary traditions, taunted him with such names as ?fish eater? and ?fish head.? These and other experiences of anti-Semitism ultimately led the architect to flee from his Jewish identity as an adult, a choice epitomized by his 1954 decision to change his surname to Gehry from Goldberg.

Beginning in the early 1980s, however, at precisely the time when he was commencing his architectural rebellion against modernism and postmodernism, Gehry sudden ly began speaking openly about his Jewish background, repeatedly describing his newfound interest in fish forms as rooted in his childhood experiences. Why Gehry made these sudden shifts demands an explanation, but the exhibition leaves the question unasked.

Indeed, if anything, the exhibition de-emphasizes the relevance of Gehry?s Jewish background. The wall text, for example, inexplicably includes a disclaimer about the carp story that reads: ?Gehry has since discounted the significance of this anecdote.? Similarly, the text sanitizes the reasons for the architect?s name change, explaining merely that ?he had been picked on as a child,? without mentioning anti-Semitism.

Since Gehry has spoken openly about these matters for decades, it is unclear why the Jewish Museum would be reluctant to probe the Jewish aspects of his work. But an institution that has long been sensitive to charges of ethno-religious parochialism ? a topic highlighted in the museum?s 1996 exhibition ?Too Jewish?? ? may have chosen to play it safe and treat the fish as a neutral symbol.

This is appropriate, perhaps, given the pareve status of fish in the Jewish tradition. But visitors to the exhibition may ultimately feel that it has merely whetted their appetites rather than satisfying their hunger for more.

Gavriel Rosenfeld is associate professor of history at Fairfield University in Fairfield, Conn. His latest book, ?Building After Auschwitz: Jewish Architecture and Jewish Memory Since the Holocaust? (Yale University Press) will appear in the fall of 2011.

Fish Forms: Lamps by Frank Gehry is showing at the Jewish Museum, New York, until October 31.