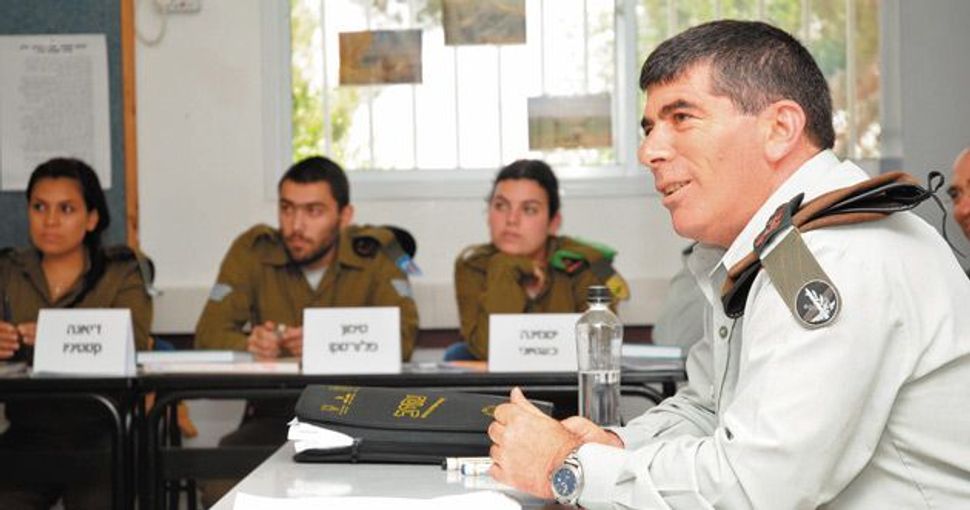 Conversion Class: Lt. Gen. Gabi Ashkenazi, chief of the IDF General Staff, during a 2008 visit to Nativ, a program that converts Israeli soldiers from the former Soviet Union. Image by IDF SPOkESPERSON?S UNIT

In the latest episode in the saga of Israel’s converts, the state is questioning the legitimacy of every conversion performed under the auspices of the country’s military.

For more than three decades, the Israel Defense Forces has offered conversion to soldiers who are not Jewish, but are descendants of Jews — and are therefore entitled to live in Israel under the Law of Return. The number of would-be converts was small — until 2002, when the IDF launched a program called Nativ, primarily for immigrants from the former Soviet Union. Since then, Nativ has converted more than 4,500 people.

But in a Supreme Court hearing September 6, the State Attorney’s representative, Yochi Gnessin, questioned the validity of all military conversions. This comes a little more than two years after a panel at Israel’s Supreme Rabbinical Court cast doubt on all conversions performed by the state-run Conversion Authority — inaugurating the so-called “conversion crisis” in Israel. The 40,000 people affected by the Supreme Rabbinical Court decision are still in limbo, as some find that their local rabbinates are refusing to let them get married, on the grounds that they are not Jewish.

While the rabbinical panel’s ruling is a matter of a religious body casting doubt on a state institution, the State Attorney’s announcement is a matter of the state calling into question the legitimacy of its own institution.

“To start with, certain rabbis placed Conversion Authority conversions in doubt and refused to register converts’ marriages, and now, instead of distancing itself from these rabbis, the state is questioning its own procedures and potentially giving a legal justification to the rabbis,” said Seth Farber, founder and director of ITIM, a not-for-profit organization that advocates on behalf of converts. “It’s outrageous.”

The questioning of military conversions came as a surprise. The Supreme Court was sitting to consider an ITIM petition calling for an end to converts being denied marriage licenses at their local rabbinates.

Gnessin had said that the state and the Chief Rabbinate were prepared to appoint special marriage registrars to marry converts, thereby circumventing the local rabbis who refuse to acknowledge such marriages. On this basis, she wanted the court to dismiss the case.

Farber objected, saying that it was unacceptable to exclude converts from mainstream marriage procedures and send them to a separate office. Farber suggested adding new regional registrars that would guarantee the granting of marriage licenses to converts, but he also said that those registrars should be open to everyone so that converts are not stigmatized.

It was after this counteroffer that Gnessin raised the issue of military conversions, saying that a question mark hung over the procedures by which military conversions are authorized. The relevance to the matter at hand was not spelled out, but the inference seems to have been this: The fact that some real problems with conversions do exist makes Gnessin’s offer of special marriage registrars seem more generous. In response to a request for clarification as to what the State Attorney’s position is, Ministry of Justice spokesman Tal Vider said that the ministry is not declaring the conversions valid or invalid. They are in “doubt,” he said.

The judge gave the State Attorney’s office 60 days to clarify its position on military conversions, and all eyes are on Amar, as he can provide the missing link: retroactive approval by the Chief Rabbinate for the military conversions performed to date. “The prime minister has to call Rabbi Amar and ask him to declare that [conversions] under the IDF are valid and recognized,” Elazar Stern, the former IDF chief education officer who set up the Nativ conversion program during his tenure, told the Forward. Stern said that he would then like to see any procedural problems ironed out to avoid problems in the future.

But Amar has been noticeably silent, and his spokesman, at press time, did not return calls seeking clarification on the rabbi’s position. Amar is widely thought to be reticent to offend Haredi leaders, who, in addition to rejecting all state conversions, have special disdain for military conversions, which they claim are less thorough.

Making matters more complicated, in this saga, Amar wears three hats here. As well as serving as chief rabbi, Amar is one of the religious leaders who helped to establish Nativ. He is also the top religious figure in the Conversion Authority, the body that signs off on military conversions. That means that if he does not come out in the authority’s defense, he is de facto raising questions about conversions under his own supervision.

As the nation waits to see how Amar will respond, the IDF is standing behind its program. “The entire conversion process is supported by the Conversion Authority within the Prime Minister’s Office and is conducted according to its regulations,” an IDF spokesman told the Forward.